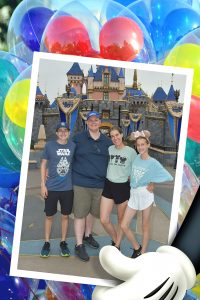 I’m back with another San Diego recap post, but today’s post is of our day spent at Disneyland (which is just south of Los Angeles). I was going to do one big post for Disneyland AND the other theme park next to it, which is California Adventure. But, it would have just gotten WAY too long. So, I’ll have one last post on California Adventure sometime soon and then I’ll FINALLY (ha!) be done recapping this trip. 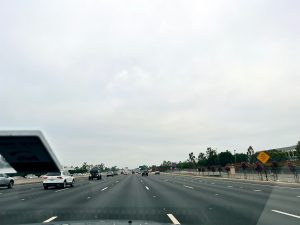 Disneyland was a first for ALL of us and we decided to take a day trip there from San Diego. It took us an hour and a half to arrive at Disneyland right at rope drop. We rented a car for the last few days of our trip and it wasn’t too bad of a drive to get there and back. However, at one point there was 8 lanes on the highway! Oh dear! My husband didn’t mind driving it, but there is no way… EVER. That I would drive this! I would say there was a good amount of traffic (not congested, just a lot of cars) the entire way. After spending so much time at Disney World, I was curious if Disneyland would be as good. Yes, it was a lot smaller and congested and the castle (Sleeping Beauty) is much smaller. I would say that Disneyland and California Adventure (you can walk between them easily, they’re right next to each other) are a cornucopia of all of the BEST rides at the Disney World Kingdom. It has rides from Magic Kingdom, Epcot, Hollywood Studios and even the Animal Kingdom. So, you get the highlight reel and you can get it all in one day with less walking! California Adventure has Cars Land, which is not at Disney World Kingdom at all and it was one of our all time favorite Disney areas to explore! 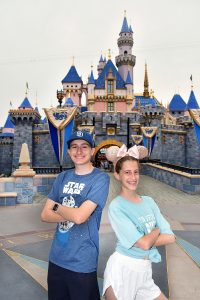 We always use Disney’s PhotoPass – Most Magical Memories to get some great shots of our entire family. We had a lot of photos taken in front of Sleeping Beauty’s Castle. The photos pop up on your Disney app right away for you to view them. This one of Nathan and Autumn sticking their tongues out at each other was so hilarious! 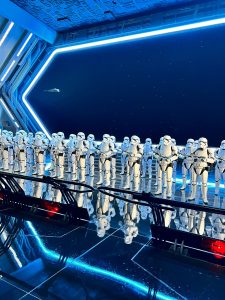 So, one item that Brian wanted to check off on this trip was seeing all of the new Star Wars stuff. We had to buy the Lightning Lane and Genie+ (yes, it is extra $$$$$$) and fortunately, we were able to get on all of the rides we wanted with this system. I do not like the Lightning Lane and Genie+, because I find it stressful to try to select and book these rides while you’re at the theme park! I much preferred the FastPass system where you could book your rides and dining 90 days before your trip. I enjoyed planning out our day so I knew what to expect. I’m a planner and Disney, PLEASE bring back the FastPass. LOL. 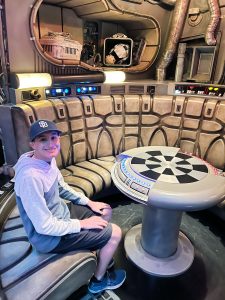 So, I get ride anxiety when it comes to new rides. When I was young, I would go on almost any ride or rollercoaster, but as I’ve gotten older I get more nervous! But, I was really proud of myself AND Autumn, we went on both of the new Star Wars rides! The first ride we went on was Rise of the Resistance and I think it is now my FAVORITE Disney ride! It had all kinds of different parts and pieces and it was a lot of fun. My favorite part of it was when we were in the car and we rolled into this elevator type thing (sorry, I am not a Star Wars fan, so I have NO idea what it rolled us in) and Autumn and I heard our car ‘click into place’ Our eyes met and we both look horrified and screamed! Yep, not too long after that… WE DROPPED! Ahhh!!! It was so scary, but we were laughing so hard after that, because we KNEW something was coming when we heard the lock noises! My husband LOVES Star Wars. To the point where it may be just a little annoying (sorry, Brian!). I watched all the Star Wars movies once and I’m fine with that! It is funny to hear how some millennials have never even watched a single Star Wars movie! I did find the Star Wars land VERY cool! The next ride we went on was the Millennium Falcon: Smuggler’s Run. A nice lady took a photo of us next to the huge Millennium Falcon. This ride reminded me a lot of Star Tours, where it is a motion stimulator ride. On this ride, they made Nathan and Autumn the pilots and OH boy. Nathan was trying to help Autumn, but she did not do well with flying the ship! It was so bad that… I thought I was starting to feel a bit sick!! Not to where I was going to puke, but I was tempted to take over those pilot gears from Autumn! Too bad I was buckled in! LOL! Ahhh!!! Star Tours did not do that to me! Anyway, once we got outside and I had some fresh air I was ok! Yep, I can tell I am middle aged… I can’t even handle a motion stimulator ride! But, I would definitely go back on it again! Ha, ha! 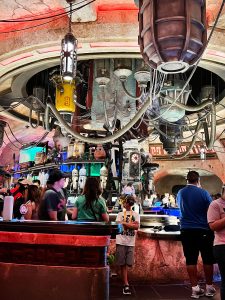 We had a 9:30 a.m. reservation at Oga’s Cantina, which is a bar with fun drinks and light appetizers inside the Star Wars area. It was really cute, but they had us share a booth with another family! If it weren’t for Covid, I wouldn’t care, but it was a little odd to be sitting so close to people we didn’t know during a 2.5 year~ pandemic! I know that this is a HOT place to check out right now at Disney, so I think they were just trying to do their best with getting people a chance to experience it. So, it was still worth it! I just wasn’t expecting to share a table! 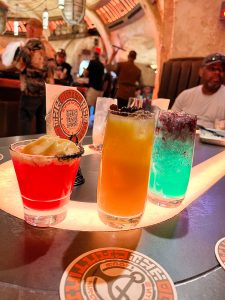 Oga’s Cantina had some great appetizers, we got the soft pretzels and a charcuterie board. Brian got an alcoholic drink, but I stuck to a non-alcoholic drink. It was 9:30 a.m. and I knew we had a LONG day (and drive!) back to San Diego. If we had been staying on site, like with Disneyworld, I would have totally gone for the booze! Alcohol tends to make me tired and I don’t do the best with ‘day’ drinking. I’m a better night drinker. After Oga’s Cantina, we broke apart into two groups and walked around and did a little shopping (that is what teen girls like to do!). We met again for lunch at Cafe Orleans. This is in the New Orleans Square, which is an area that Disney World doesn’t have at its parks in Florida. There is some great food in this area, such as Mickey beignets and mint juleps at The Mint Julep Bar. We dined at Cafe Orleans and it was DELICIOUS!!! Cafe Orleans has non-acoholic mint juleps and they have free refills. For lunch I got THE best grilled cheese I have EVER had in my ENTIRE life. I do not kid. I got their Battered & Fried Cheese “Monte Cristo” with brie, swiss and mozzarella. It came with seasonal preserves and pommes frites (fries). But, the kicker?!! THE BREAD was basically a beignet!!! Sweet, soft and dusted with powdered sugar. Oh my. If only I could have this sandwich for lunch everyday and not gain a pound. It’s a Small World is a ride I went on as a child with my mom on my first ever visit to the Magic Kingdom at Disney World. I have found memories of then taking Autumn on this ride on her first trip to Disney. My favorite colors and white, gold and blue and WOW… they renovated this ride not too long back and I LOVE how it looks! What a gem of a ride! So, Disney didn’t always have Starbucks and I can remember a trip not too far back when we realized Disney had brought Starbucks to their theme parks! Oh, what a great trip that was! Autumn and I always take a photo of ourselves with our Starbucks at Disney drinks! Such fun! So, Autumn is a teen girl and they LOVE to shop. Oh dear. Everyone had these little backpacks that they were selling in the stores. They came in all different colors with different characters on them. Autumn had to have one. You’ll also see she got a Mickey Pura Vida Bracelet! Autumn and I also got ourselves matching Disneyland pretzel sweatshirts. They’re scented and smell just like soft pretzels! It was funny, because we wore them at the airport on the way home and on the plane the lady sitting next to me could smell my sweatshirt! Thankfully she liked the smell! I always get myself an ornament each time we go to Disney. I usually get a princess slipper, but this time I decided to get a Disneyland ornament. I don’t know if we’ll ever be back at Disneyland, so I wanted to remember it with an ornament. I also saw a Paris coffee cup, but I didn’t buy it since I like to have LARGE coffee mugs (give me all the Rae Dunn!). This one was rather small, yet cute. Once it was afternoon, we were able to use our park hopper and hop on over to California Adventure. Stay tuned for my next post!

That’s a wrap! I’ll have 1 more recap post for our full day at Disneyland/California Adventure.