This morning I took Nathan and Autumn to the Museum of Transport so that they could meet my coworker Cami’s two kids Jacob (May 2006 birthday, just like Nathan!) and Bonnie who is 4 months older then Autumn and will be 1 this Friday. I met Cami at work at a Mommy’s Lunch that another mom threw for the ‘pumping Momma’s’ so that we could all share stories. Cami was pumping at that time, but if I remember correctly, she stopped pumping at about 9 months. At lunch we realized we had sons that shared the same birthday year and month and she asked me if I wanted to get the boys together for a playdate. Another reason for the playdate is because she is planning on sending Jacob to the same preschool that Nathan will be going to at 3 1/2 or 4. We want to send the boys at the same age, but, of course, they have to be fully potty trained.

Anyway, if any of you read my previous post, I was quite nervous about taking both kids out alone to such a huge place! Nathan is pretty easy to tow along now, but keeping track of him while wheeling Autumn in a stroller can be quite a challenge when he is free to roam. Also, the huggest challenge is taking a breastfeeding baby out in public for several hours. Not only is she a breastfeeding baby but she is ALSO going through separation anxiety AND stranger anxiety. Oh, lucky me… Anyway, I brought a bottle, and she can feed herself now, so that was great. She was awake I’d say 1/2 of the 3 hours we were there and I was able to keep her in the stroller the entire time. She sucked her bottle down slowly and then played with her toys, then I gave her a juice cup and she mainly loves to knaw on the nipple of it and suck a little of the diluted juice. Then, she fell asleep the last 1/2 of the playdate (YESSS! I was so lucky!).

So, the first thing we did when we met up at the Museum of Transport is we looked at all of the REAL trains! 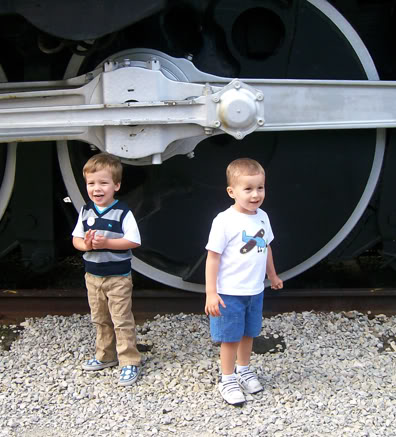 The boys had a blast looking at the trains… there was A LOT of them. We spent probably 1 1/2 hours looking at trains, a 1/2 hour (ha! maybe more!) using the potty and the other hour looking at the old time cars. This is a cute picture of the boys by one of the wheels of the trains. The boys are about the same height and it was so cute, when Jacob first saw Nathan, he gave him a kiss on the cheek! heheh! Gotta love 3 year olds! 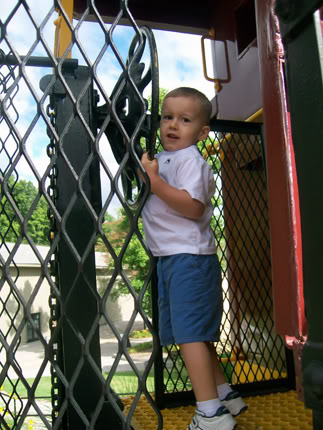 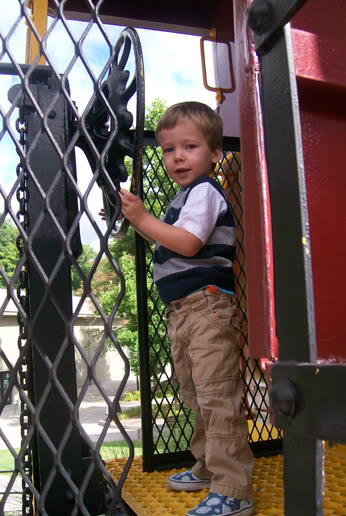 There were several trains that the boys got to ‘go up’ in to see what a real train looks like from the inside. There was one train that had several cars and the boys went up together into the train and we heard them running around, stomping, yelling (to hear their echoes), etc. Too funny! There was also wheels for them to turn, hence the pictures above… 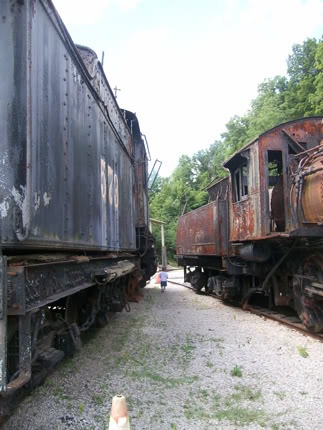 Nathan loved these rusty locomotives as he called them… 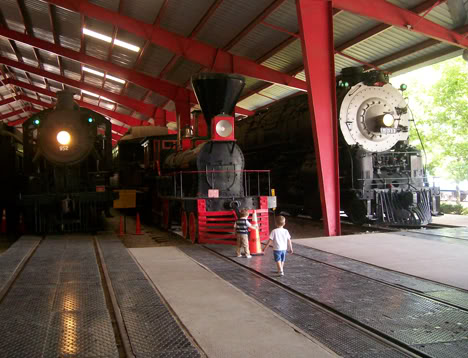 Two of the trains had lights on. 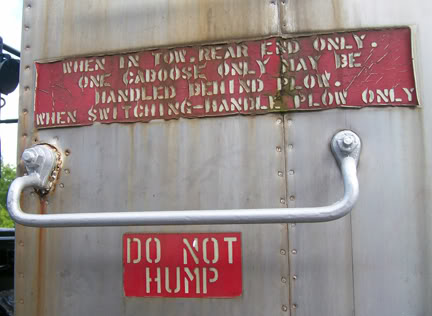 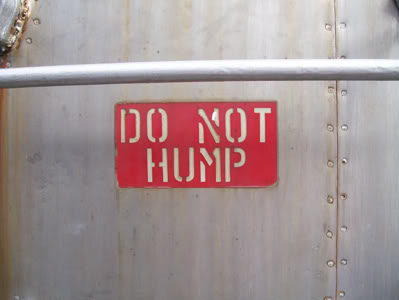 Of course, Cami noticed these signs… haha. She thought they were hilarious and asked me to take a picture… I have NO idea what they mean, but, hmmm… very interesting… 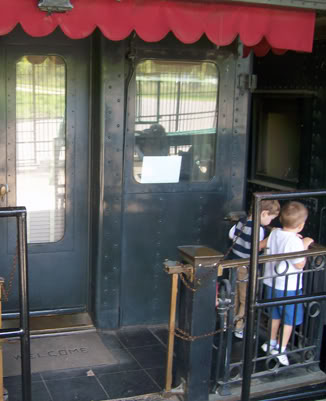 This picture is cute because both of the boys are looking down and standing on their tiptoes. 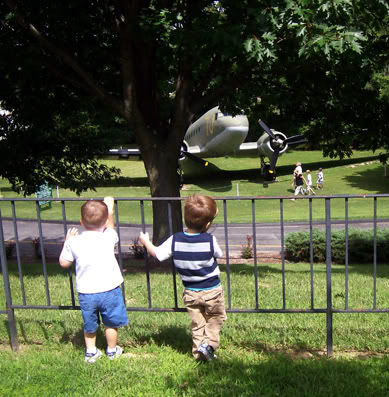 After looking at the trains, the boys got to see a huge plane from a distance. 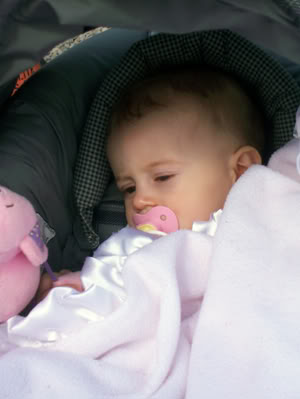 Little Auttie slept. I didn’t get a picture of her and Bonnie together since they were both in the strollers the entire time. 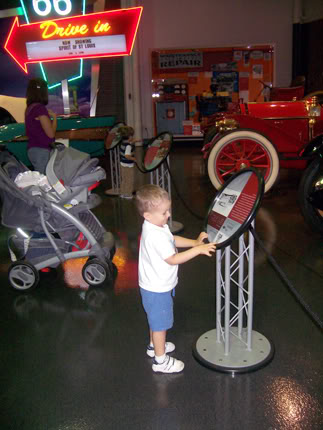 Then we went to look at the old time cars. Nathan and Jacob were spinning the wheels. You can see Cami and our two strollers with the babies in them, too. 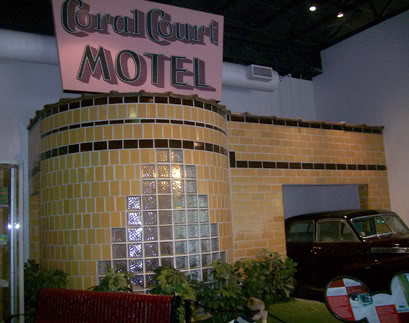 If you are from St. Louis, you’ll recognize this… the Coral Courts! Its a real piece of it from the excisting structure! It was funny because we went to go look at cars on the 2nd level, and Cami told the boys to push the elevator buttons and Jacob hit the alarm on the elevator! Oops! Cami was like, “Umm. Sorry, uhh. We have two 3 year olds in the elevator if that explains anything.” 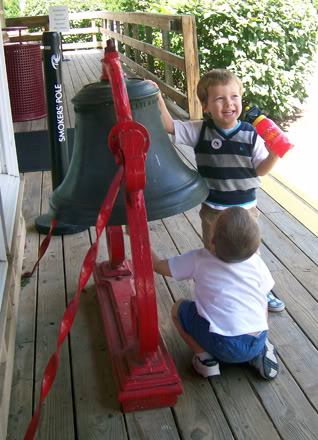 At the end, Jacob showed Nathan how to ring the bell. We had a lot of fun but oh my I was so freakin’ exhausted when I got home. Seriously, it is hard to keep up with Nathan with a stroller but he was well behaved until near the end. Cami wants to go to the zoo next because she can get free passes to everything because someone in her family has a membership. Ohhh, it sounds fun but… sooo exhausting… She must like to go to all these big places!! heheh! I guess it is more practice with taking two out in public… :o)-