Jeremi got me a Wii Fit for a Christmas present last Christmas, which was a month after Autumn was born… and, I used it for the first time today during one of Autumn’s naps! Isn’t that sad? That is how bad I have been about working out… I want to start working out 3-4x a week after the kids are in bed, but Autumn has been so hard about going down for bed lately that I haven’t had the energy to start. I would work out BEFORE she woke up, but she wakes up at the crack of dawn! At least she has been sleeping straight through the night for most nights, though. Anyway, I really enjoyed the Wii Fit and I am going to try to work out as much as I can, I need to accept that is the best I can do right now.

I love the Yoga part of the Wii Fit as all of the Yoga workout dvd’s that I have SUCK! I also love how it unlocks new Yoga lessons as you advance! It tells you while you are doing the positions to breath and I love that as I forget to breath when holding positions! My second favorite is the strength building, then aerobics… I hated the balance section, which is mainly games and I have a hard time getting them to work as I move my body but it doesn’t seem to move on screen as well. I enjoyed the soccer and marble game the most out of the 4 or 5 games it had unlocked. My legs felt like rubber afterwards!

My goal is to rotate my workouts throughout the week.. Night one do wii fit, night two I’d like to start the 30 Day Shred, then night three I have a wonderful aerobic tape by Jane Fonda that ROCKS (I have had it since I was 16!!) and night 4 a The Firm dvd for upper arms with weights. I really need to tone up this almost 32 year old body!! Especially after having TWO babies! Sigh! And, getting rid of the flab on my tummy is a good incentive since I doubt the hubby will approve a tummy tuck! ha!

Ok, sorry, I probably put you all to sleep. So… Here are some pictures of Autumn with her first puff’s. She is officially a puff-aholic now! I am a paranoid Mommy as you all know… so, yep, I cut the puffs in half. 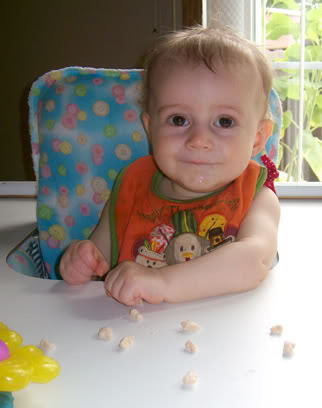 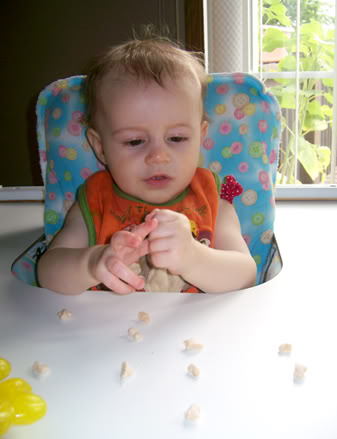 So many… oh, which do I devour first? 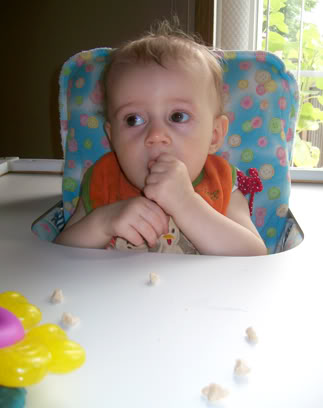 She was grabbing them and as soon as she’d get one in her hand she’d make a tight first and try to lick it out of her hand with her tongue. So cute!