Sorry I have been away ALL week, but… where do I start? Tuesday, I left work 45 minutes early, without even realizing it until I pulled into my subdivision and saw several moms waiting for the school bus. I thought to myself, “Wow, this is weird, the school bus must be running late.” THEN, I realized, I had left work an hour earlier then I should have!!! Oops! I am scheduled to leave work at 4pm everyday, and I walked out of there, thinking it was 4pm! I have worked there almost 7 years and I have NEVER done that before! Of course I called my boss right away, and he got a good laugh out of it. I came into work the next day, had a note on my desk that said, “Do not leave until the alarm sounds, not a second before, per Management” and there was a stop watch next to the letter. Yes, my work had so much fun TEASING me about leaving an hour early! And, yes, they really did set the stop watch, it went off at 4pm. Gotta love your coworkers! heheh.

Then… this is the best part… IN that hour that I was home from work early… Nathan took it upon himself to jump on the couch, on top of my closed laptop (which I always leave on the couch)… and, well, lets just say, LAPTOP DIED. Yes, this is what happens when you have 2 kids, and you are getting a snack for one in the other room, and the other one decides that the couch is his own personal bouncy house. Sigh. BOYS!!! So, I keep thinking to myself, yes, yes, if I had not left work early, I would still have my 2 1/2 year old laptop still.

Yes, what a week. I am glad it is over. Now, lets quickly change the subject.

Autumn turns 1 next Saturday, and I am getting things ready for her party. I wanted to get her a jewelry box with play jewelry, but there really isn’t any jewelry boxes on the market for 1 year olds. So, I decided to make her one… and it was fun! 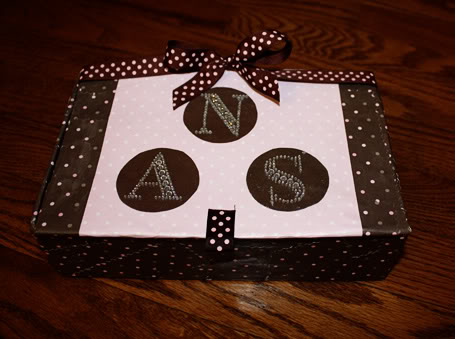 Here is the front of it… I had an old cigar box, which was actually a box I put my first seashells in as a child. I bought polka dotted paper at Hobby Lobby and some modge podge glue, and cut the paper in strips with a scissors with a decorate edge. Then I modge podged the strips all over the box and put one layer of modge podge over the entire box. This seals the paper in and it gives it a little bit of a gloss. I also got these cute initials that looks like diamonds at Hobby Lobby. I had some ribbon and tied a bow on the box and also made a little pull tag on the end so she can open the box easier. 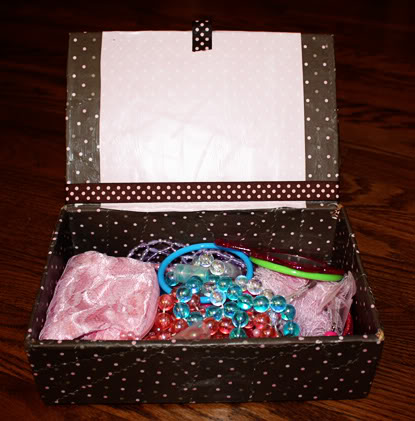 Here is the inside of the box… I bought her some inexpensive jewelry at the dollar store, and most of it is chunky and I avoided small rings and earrings. I also found a cute Disney Princess comb and mirror set that I added to the box. Autumn LOVES playing with containers and putting things inside and outside of them, that I think she will LOVE her jewelry box. Plus she loveeesss strings, so lots of these necklaces she will really enjoy! Had to share!