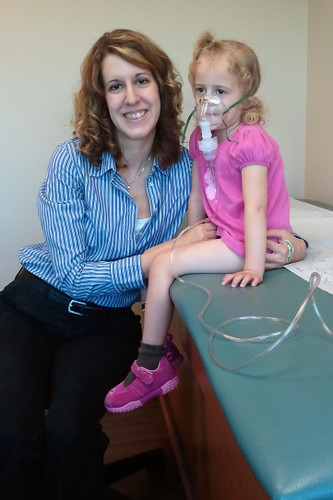 Nathan has had asthma for the last few years, however… Autumn started having asthma this Spring. I am really bummed that both of my kids have to endure this… asthma is not fun, for them OR for me. Autumn’s doesn’t seem to be as severe as Nathan’s yet, but it did result in TWO nights this last Spring where Mommy and Autumn got under 3 hours of sleep due to persistent coughing (on her part), numerous nebulizer treatments, some vomiting of mucus, Mommy worrying, etc. Those two nights sucked, ASTHMA SUCKS. The first night she had problems, I didn’t have any sort of medicine for her, but we made it through the night and I got her into the doctor at 9am. Here is a photo of us at the doctor’s office. Don’t we both look EXHAUSTED? 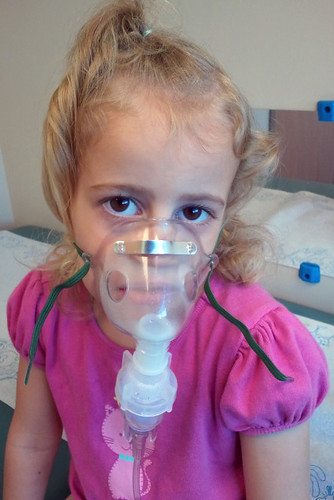 Autumn is at that age where she is go, go, go! So, it amazes me she will sit still for 10 minutes to do a nebulizer treatment, then again if she needs a second one 15 minutes later. She must know it helps her. 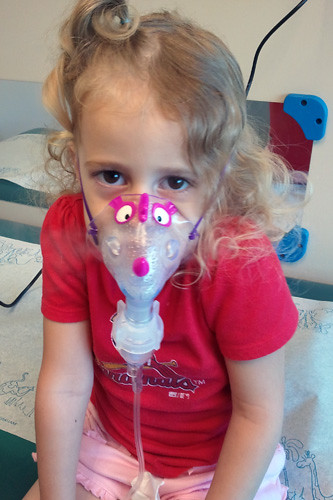 Here is Autumn again, after her second sleepless night a few weeks later, from another asthma episode. After this second episode, she was referred to go see Nathan’s same specialist at Mercy. I was also told to give her the oral steroids if needed if another bad night were to happen.
The appointment was the same as Nathan’s, except they did not do the breathing tests since she is not old enough. They DID do an allergy test, which I wish I had taken a picture of her back, but since I was holding her on my lap I couldn’t take one.
We found out that Autumn doesn’t have as many allergies as Nathan, but she scored a 4 on cats. So, both of my kids are highly allergic to cats, she is also a little allergic to some trees.
We got an allergy plan for asthma… she will not need to be on daily meds yet, unlike her brother.
Green Zone – Doing well.
Yellow Zone – One nebulized treatment every four hours. May be repeated three times in the first hour only (15 minutes apart) if an inadequate response.
Red Zone – Give oral steroid. See doctor or ER immediately.
Autumn will go back in 6 months, hoping we don’t have anymore bad nights for awhile!