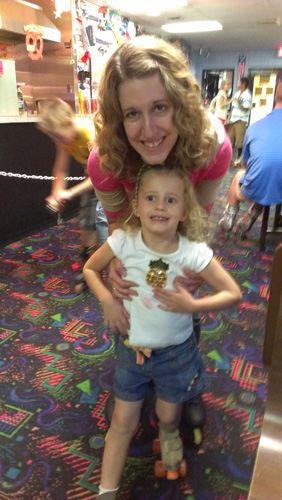 I used to go rollerskating A LOT when I was younger, and I have been meaning to take the kids rollerskating for quite some time. Finally, this hot Sunday, I decided to give it a whirl. Wow, what a flash back to the late 80’s/early 90’s. The place has NOT changed since I had been there last… same glow in the dark carpet, same everything it seemed. Nathan was a little crazy with his footing at first, but by the end he made it around twice by himself without touching the wall. Autumn was a little unsure of it, but she did give it a good try the first hour. Nathan is begging to take skating classes now, I am not sure, we will see if we can fit it in as I want him to play soccer again and the fall and he also wants to be in boyscouts as the offer it in 1st grade at his school. They did not have the little ‘walker’ things at this skating rink, and I am not sure if there is any other skating rinks in STL that offer those, as it may have helped Autumn. Nathan had skates on but wants to try the rollerblades next time. I am pretty good at rollerblading but hadn’t had mine on in several years so it took me a little while to warm up, but wow, I had a good time! 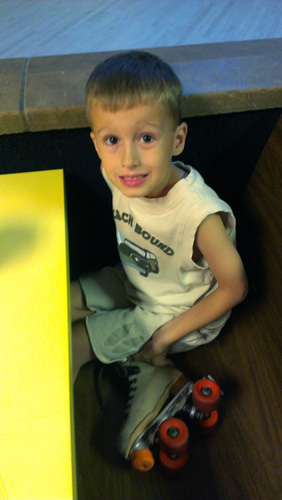 Nathan wanted me to take a pic of him with his wheels. Sorry, no photos of us skating… it was just hard enough to watch two kids on skates… and, the bathroom trips with skates are never fun, either! ha!