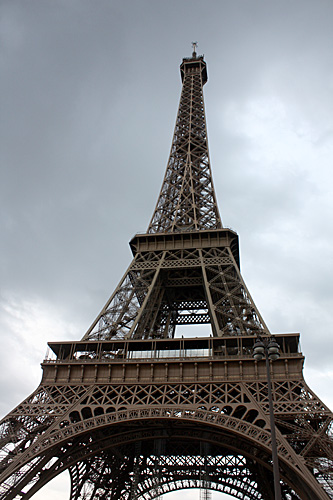 On our first day in Paris, we had dinner plans (I think they were at 8 or 8:30pm) on a glass boat on the Seine river. After our nap, and lunch at Le Nemrod, we took another nap and then headed over to the Seine River to look for our boat. This was the first time I got to see the Eiffel Tower up close. I had seen it from the cab ride from the airport to our hotel, but I did not realize how grand it was until I saw it from up close. WOW! We were running a little behind for our dinner, and Brian didn’t want to miss the boat, so I didn’t get to take as many pictures as I wanted… but, I got a few (while quickly walking, of course! ha!). 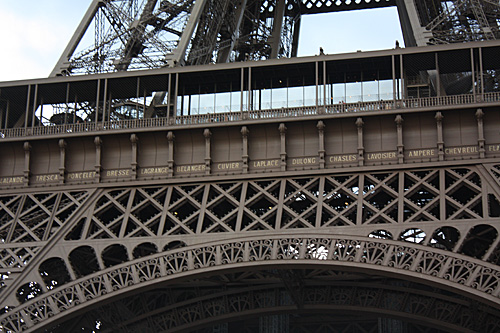 Seeing the Eiffel Tower is one of the greatest moments in my life. Its quite a site in person. Yet, I still had not seen the Eiffel Tower at night in all of its beauty. That, is even more amazing. What a night we had in store for us! 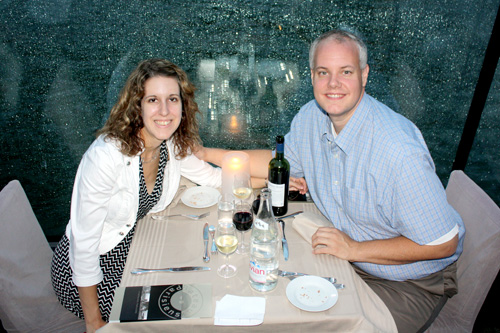 Here we are on the boat. I would say we definitely look jet lagged and tired, but we cleaned up well. Ha, ha! I had expected to spend soooo much time getting ready for this dinner cruise, and I think I spent 5 minutes getting ready I was THAT tired. I really never got on the whole Paris time, I think I just managed as well as I could. I seriously slept everywhere on the trip… on the bus, sitting in a chair at the bus station waiting for the bus (I felt so silly falling asleep in the chair, but I couldn’t help it!!!), on the bus, every minute we were at the hotel. Ugh. I just do not do well with time transitions! Poor me! 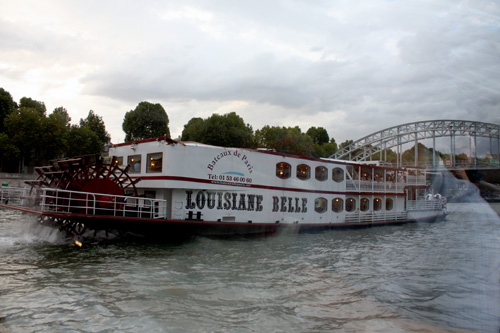 Here is a view out of our window on the boat ride. It did start to drizzle and rain while we were on the boat, but stopped by the time we got off (bonus!). 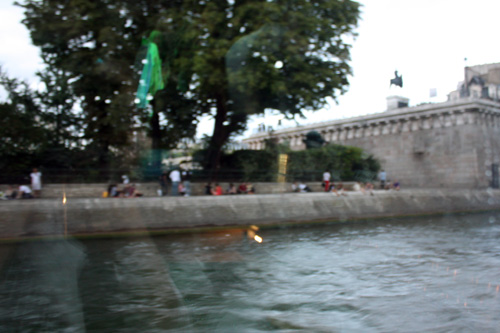 This is a blurry picture, but I was AMAZED at all of the people picnicking along the side of the river. IN the rain, with umbrellas! They had wine, cheeses, sandwiches… just sitting there with friends enjoying the view. I think if I lived in France, I would love to do that… maybe not in the rain… but, the Seine is so romantic at night, with all of the bridges and boats… the view of the Eiffel tower. Sigh. I want to go back! 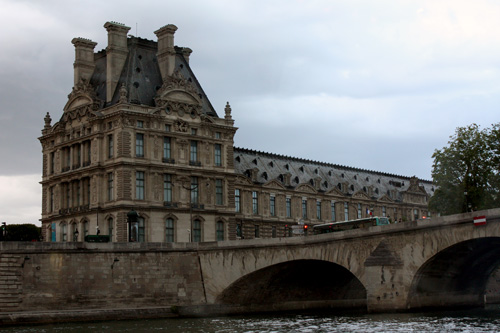 Here is the Louvre. It took seriously 15 minutes (maybe longer) to float past the Louvre. Its huge. Really, I know now, because we spent an entire day in there. Huge. 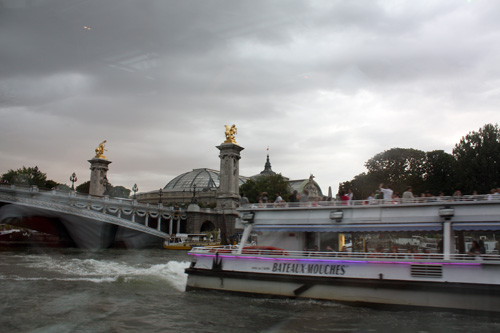 Fancy golden bridge we went under. There were a lot of bridges we went under, and Brian and I decided at one point in the night to kiss under every bridge (since the boat is glass, even on top, it was like we were really going under each bridge). Each bridge had a name and special story, too. 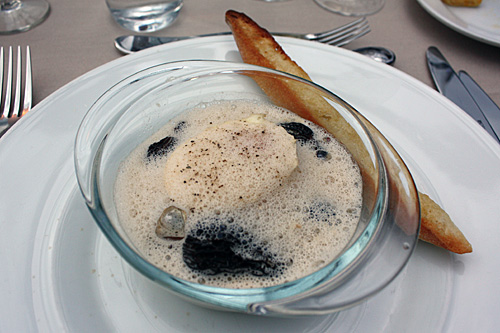 With dinner we had 2 glasses of champagne, and a white and red wine! It was a lot. Don’t worry, we didn’t drink it all. Ok, now I will start in on the food photos… appetizer. I really wanted to order the asparagus soup. I panicked, did not think I would like it… and, got this. This was disgusting. Its foamy egg mush and mushrooms (I think those morel mushrooms people here in Missouri hunt for in parks at certain times of the year). BLEH! This is actually the only gross thing I had in Paris. Seriously. So, I can’t complain. 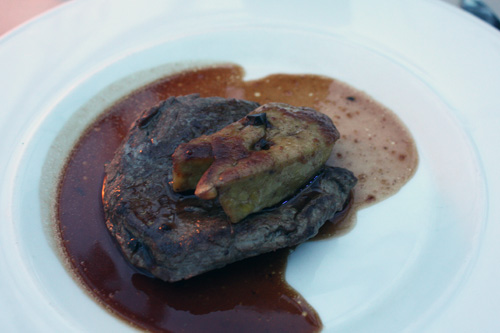 I ordered steak, and it was really good… not as good as the steak I had later that week in an authentic French restaurant, BUT still just as good as a steak at an upscale STL restaurant. I am not sure what the thing on top of the steak was, but it was good (I figured it was best to not know what it really was, since it tasted good.) 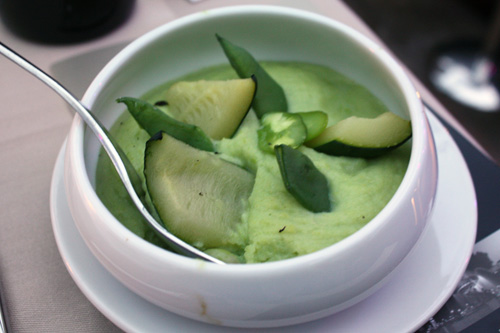 Pea potatoes. I don’t really like peas, but these weren’t bad. Yum! 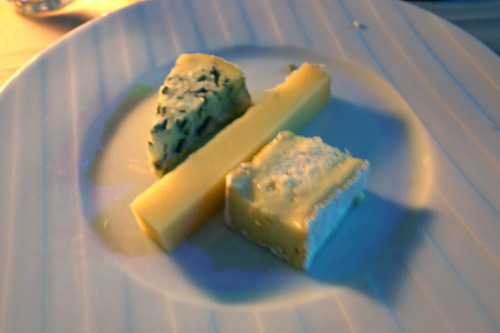 We had a cheese plate after dessert. I forgot to take a picture of my dessert, too! BOO! 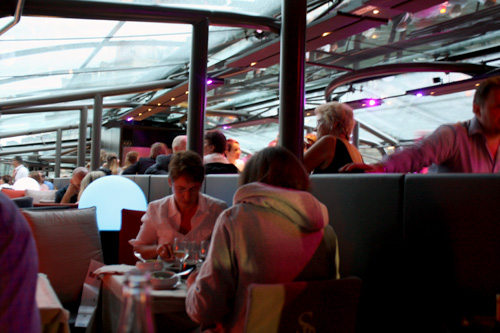 Not only did the glass boat have a wonderful view, we had live music on the boat and a dance floor! Brian and I even danced to a couple of slow songs. It was really sweet to dance with him on a glass boat on the Seine river in Paris. What a romantic evening! 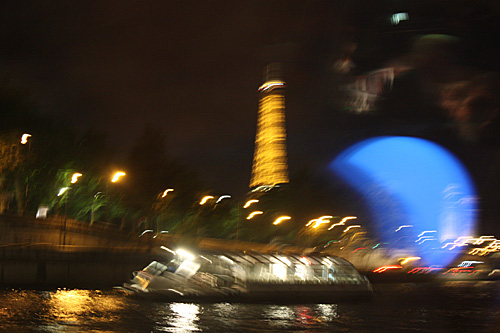 Its a little tricky to take photos with my camera at night, so this photo is a little blurry… but, it just shows how beautiful the Seine river is at night. 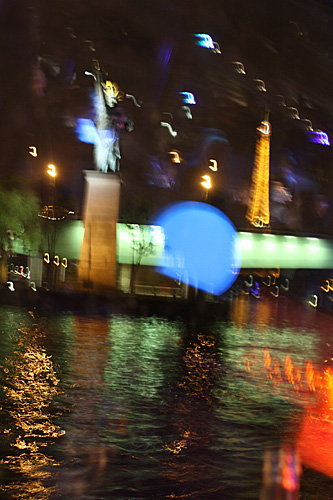 Another blurry photo, Statue of Liberty and Eiffel Tower. 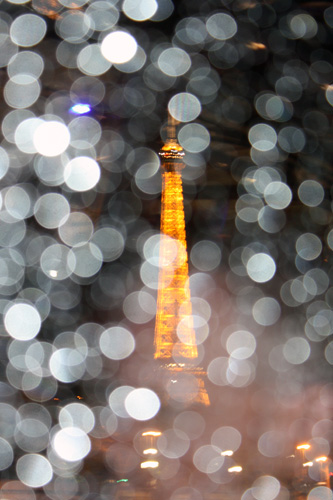 Love this photo I took of the Eiffel Tower through the glass window that had rain droplets on it from the boat. 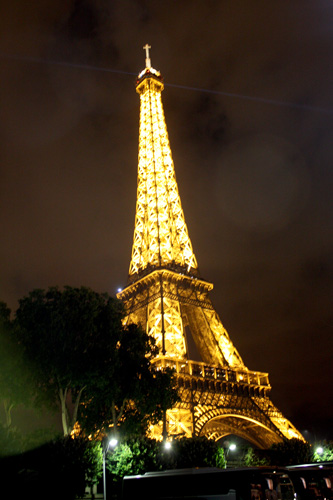 After we got off the boat, it was amazing all the excitement in the air, everyone was down by the river, by the Eiffel Tower… just such a great time. I took so many photos of the Eiffel tower, I got some good ones, too! I think. 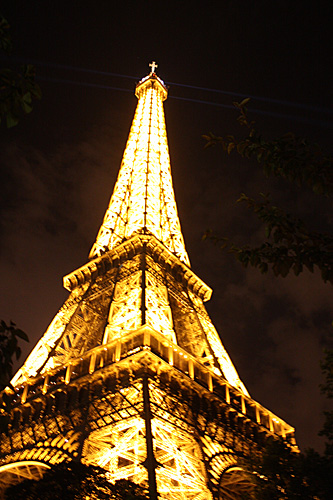 They turn on these white twinkle lights every hour? on the Eiffel Tower and its seriously one of the most beautiful, truly beautiful sights I have ever seen. Everyone would gasp when they turned on and then moan when they would turn them off. I got a picture of these later when we had dinner on the Eiffel tower the next night that I’ll post later. 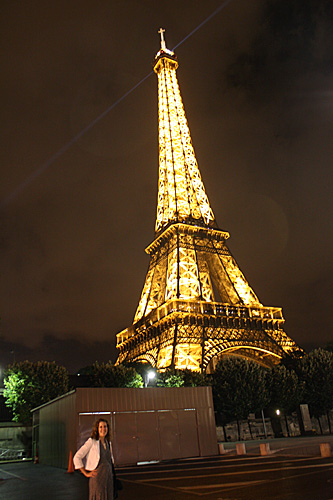 Me by the Eiffel Tower 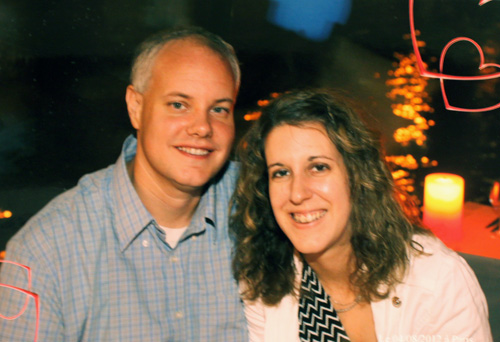 Here is a picture of a picture, we had a professional picture taken near the end of the night. Oh, I look so tired. We really are not this orange in the photo, I just didn’t take a good copy of it. Ha!
And, that sums up Day One in Paris!