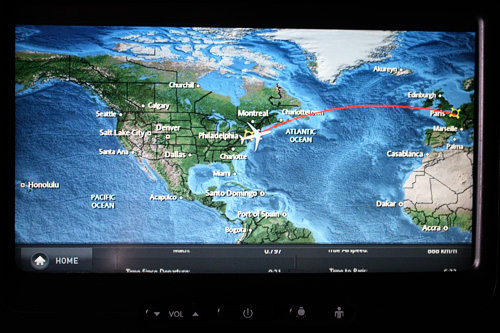 Before traveling to Paris, I had not flown since I was pregnant with Nathan (so, over 6 years ago!). So, I was pretty nervous about flying to Paris… since, it had been so long since I had flown and because its A LONG flight. 2.5 hours into Philadelphia and 7.5 hours from there to Paris. I will say that I had never been on one of the larger ‘fancier’ jets before, but WOW WOW WOW I loved it. The plane from STL to Philadelphia was just 2 people on each side of the row, our flight attendant was a little strange- she actually fell asleep for the entire flight in her chair after serving us drinks! LOL! Then, we boarded the BIG jet which had 5 seats in the middle and 2 seats on each side of the row, and it was LONG. Seriously, I had never been on anything like it (wow, I sound pretty amateurish here, I can tell). What I loved was the screens we each had at our chairs. You’ll see in this photo is showed us GPS of where we were at and we could also watch movies, listen to music, etc. We were also served a hot dinner and breakfast (ok, breakst was JUST a muffie top, no, not an entire muffin, just the top!). The only bad thing was I stayed up till 2am the night before we left so that I would be tired enough to sleep on the plane, but I COULD not sleep. I think I was nervous and there were a few kids on the plane near us that were Autumn’s age and would not sleep and kept crying. Eek! Poor parents! That is when the relaxing music came into play! 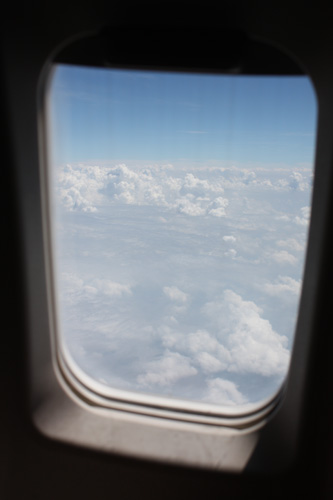 I always love to take a cloud photo! We flew US Airways, and it was perfect going to Paris (thank goodness!), but on the way back it was AWFUL AWFUL AWFUL. I think US Airways international travel may be ok, but domestic… yikes. I will talk more about that when I get to my LAST Paris blog post. 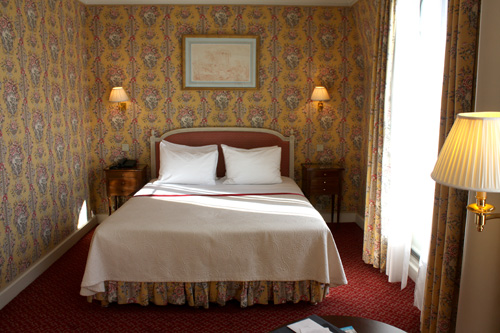 We arrived in Paris around 7:55am on Saturday morning… which meant we traveled ALL day on Friday. We took a taxi to our hotel, Victoria Palace. This is our bedroom, and it was amazingly decorated… that is NOT wallpaper on the walls, it is FABRIC! Beautiful fabric, this photo really does not do justice (plus I should have turned the lights on). 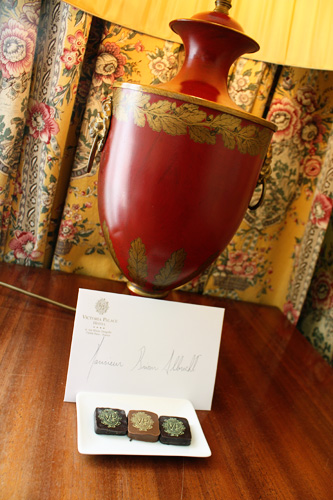 Chocolates upon arrival, we also got chocolates and a little card with weather details for the next day every night. 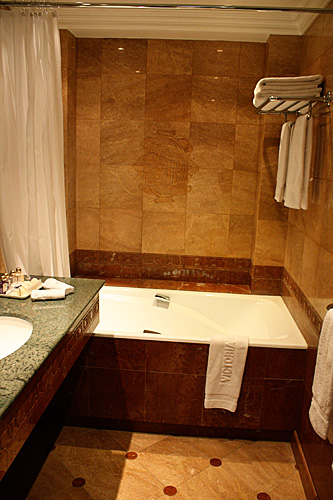 The bathroom was HUGE. 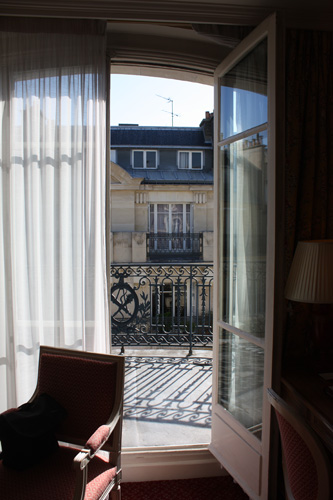 And, what hotel room in Paris is without a balcony? We had two balcony doors and I loved the sunlight that poured into our room from them every morning. 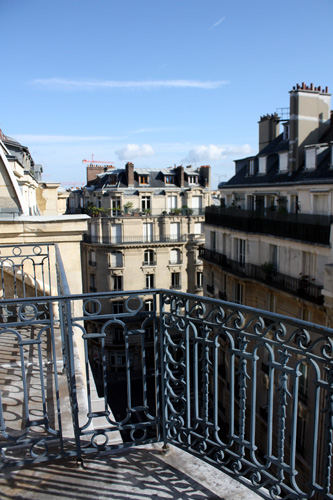 View from our balcony, look at the puffy clouds. To my surprise, Paris is really just all of these tall white buildings with iron gated balconies, but with stores and restaurants on the bottom floor. I am not sure what I was expecting, but you’ll see this on most streets in Paris. 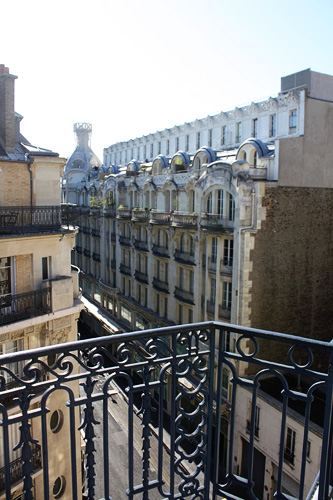 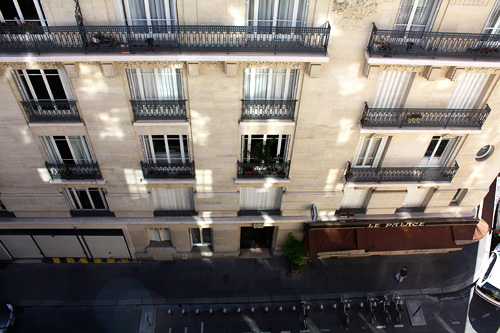 View from our balcony looking down. Really, this is what ALL the buildings look like in Paris to some extent. Its beautiful. 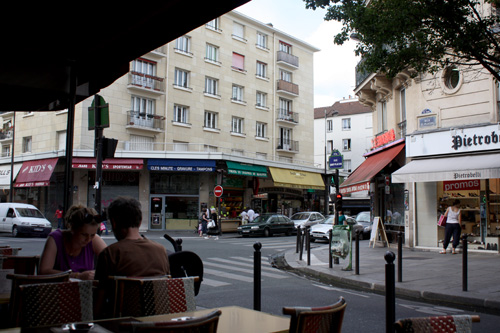 So, I am a little embarrased to admit, but what did we do after we first checked into our hotel in Paris? Uh… we took a 3 hour nap! I think it was just 3 hours… we had planned to do the hop on and off boat on the Seine river, but… the lack of sleep was killing me. I so wanted to go out and PLAY in Paris, but I couldn’t. We finally woke up starving and got a recommendation from our hotel on where to eat lunch. Here is a view of the street on our way to lunch. You can’t see, but on one of the store awnings it says TAMPONS really big. LOL. I found that amusing. Brian and I of course googled to see if it meant something else in French, but, nope, it meant what it is. I know, we are dorks. 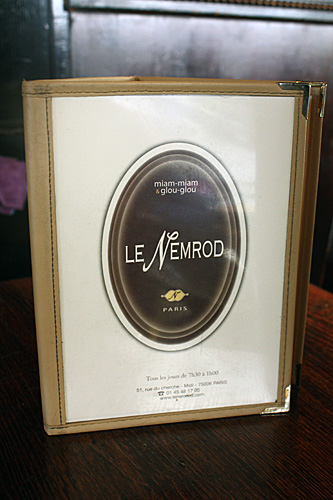 So, the restaurant that the hotel suggested to us was called Le Nemrod. Uh, yeah, we had to Google that word, too, to see what it meant in French. LOL! 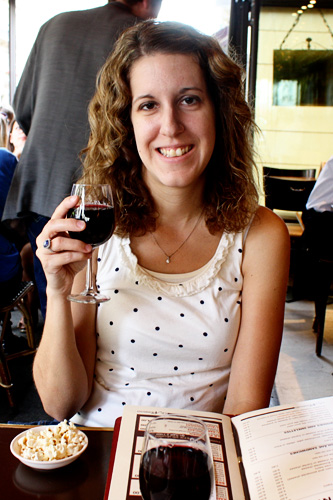 So, dining in France is a little scary if you are jet-lagged and don’t handle a lot of alcohol well. For some reason, the French love to drink Champagne before their main course, and with dessert. They also seem to love to have several red AND white glasses of wine DURING the meal. This didn’t happen at Le Nemrod, but at two of the fancier dinner places we went to, they offered us complementary Champagne (twice!) and brought out TWO BOTTLES- one red and one white. And, yes, THEY were included in our meal. I learned quickly (first night) that I am not up to that capacity by any means. Luckily, for lunch, I had one glass of red wine (it was so rich, oh my goodness, we were so spoiled there!) and that was it. Dinner was another story, but… it was our first night, so I won’t be too hard on myself. Ha, ha! 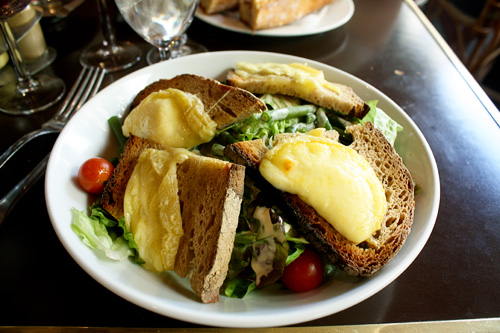 You might want to stay away from my blog when you are hungry, because I am going to be posting A LOT of photos of food in the next week. I just wanted a salad for lunch, and since the menu was in French I had a hard time figuring out what salad to order. So, I took a gamble… and, this is what I got. There is some sort of egg on the toast, and then the salad under it was pretty normal. The lettuce was SO fresh and I loved the vinaigrette dressing. YUM. A very nice, light and refreshing lunch. 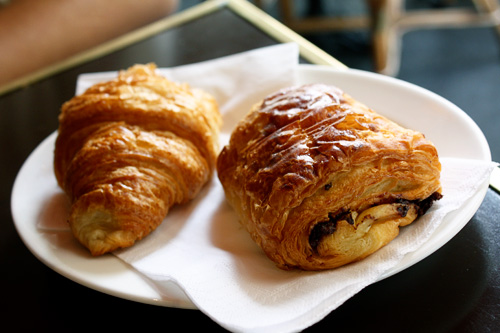 I also wanted to try some French pastries, so Brian ordered just a regular croissant and I ordered a chocolate croissant. YUM!
This post is getting a little long, so I will put our dinner glass riverboat cruise on the Seine in a separate blog post next. (There are a lot of photos, so it reallllly needs its own post!). So, stay tuned!