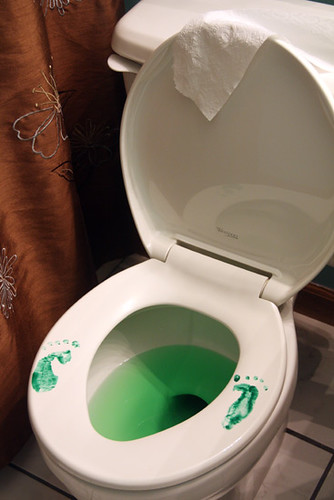 The kids found that Leprechaun Nickel had been roaming the house while they were fast asleep. Aside from their special Leprechaun breakfast, they noticed he has used the potty! And, had left some green foot prints on the toilet! 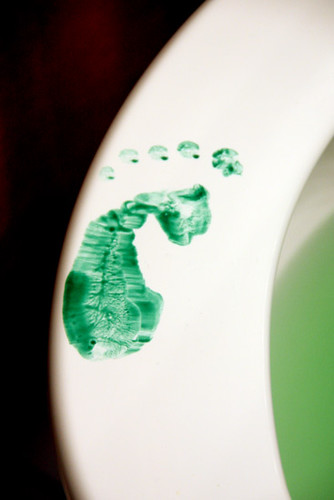 Autumn still talks about Elfie (from Christmas) using our potty, so of course Leprechaun Nickel had to use it, too! I love how these little footprints turned out. 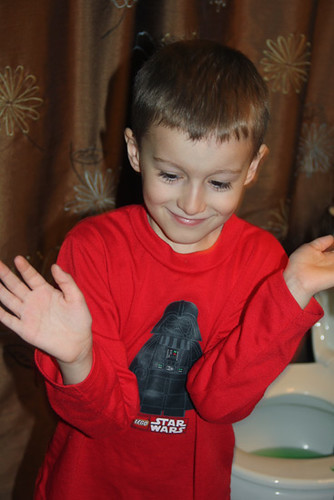 Nathan’s reaction to what he found in the bathroom. lol. 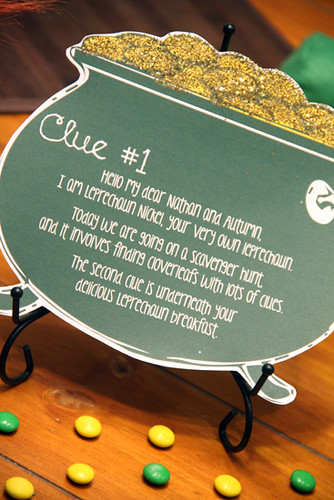 Nathan and Autumn found their first clue on the breakfast table. It told them to put on their fun St. Patty’s headbands (Nathan’s was a Leprechaun hat and Autumn’s a rainbow). Nathan looked under his plate for the second clue. 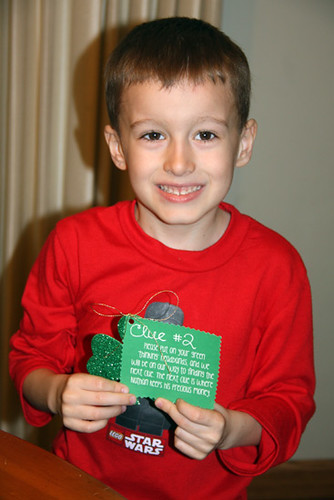 Nathan holding the second clue, look at the big smile on his face. 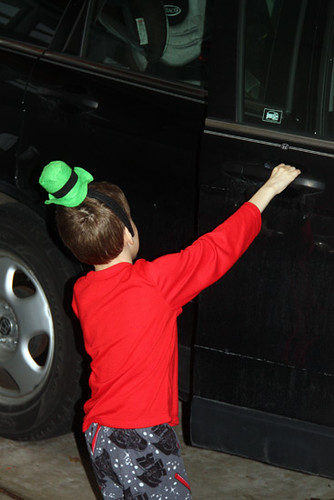 The scavenger hunt took the kids ALL over the house… even out into the garage. Here is a photo of Nathan opening the door to my car to look for another clue. 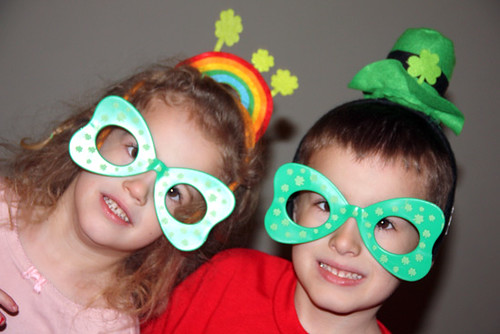 And, he found sunglasses! Or, well, just glasses! I LOVE this photo of them!!! Its so nice when I get such a cute shot of them together, it really is rare to get that at 4 and almost 7! 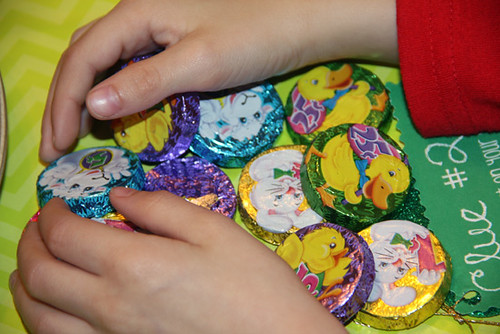 I found these cute little chocolate bunny coins at the Dollar store and I hid them all around the house. The kids would snatch them up as they found them throughout the scavenger hunt. Here is Nathan hording all of his coins. 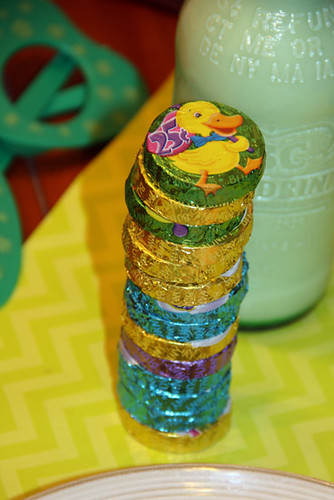 Autumn stacked all of her coins up. I will say, there was a little bit of an outbreak of tears from Autumn, because Nathan found more coins. And, Autumn loves chocolate and wanted ALL the coins. We got Nathan to share some of his coins, such a sweet big brobro. 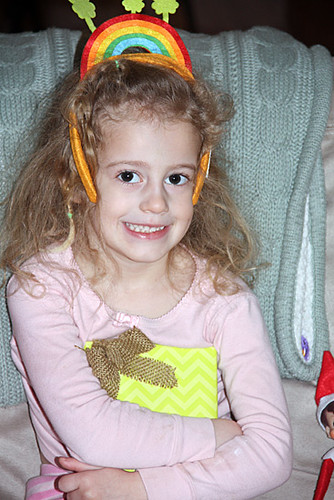 One special clue led the kids to a gift. What could it be? 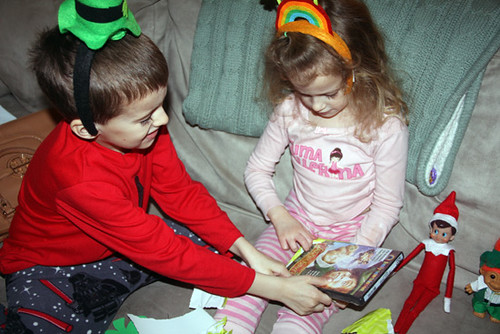 Opening it. (Yes, even Elfie came back to join in on the fun! Nathan has been missing him!) 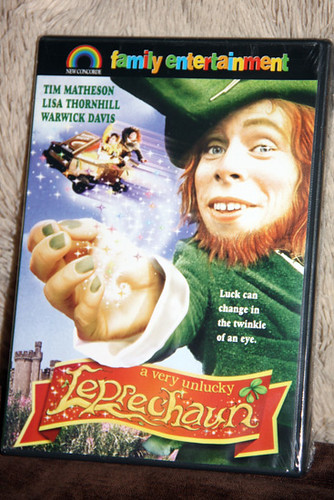 The gift was a movie, The Very Unlucky Leprechaun. I got this off of Amazon, it had fairly good reviews… but, it is sort of an independent film. We watched it the next evening and the kids seemed to really enjoy it! The Leprechaun in it is a little ugly, though! lol! Not that I know if Leprechauns are usually cute or not. 😉 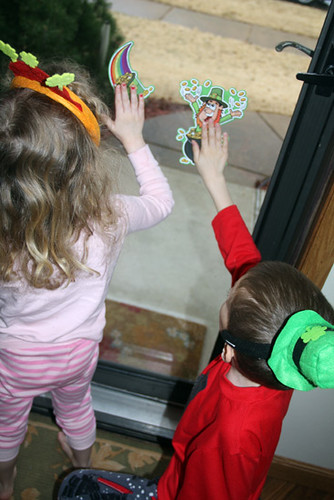 The next clue led the kids to the front door where they found some St. Pat’s door stickies. They really had a fun time peeling them off and sticking them on the door. Nathan even helped his sister peel hers off. 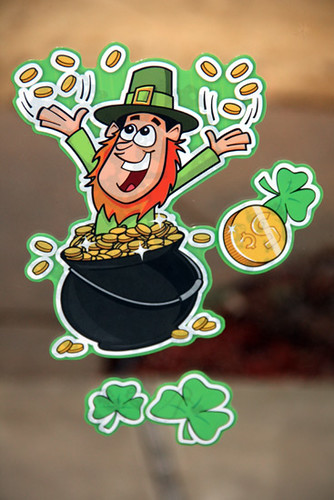 Now my door is all decorated for St. Patrick’s Day! 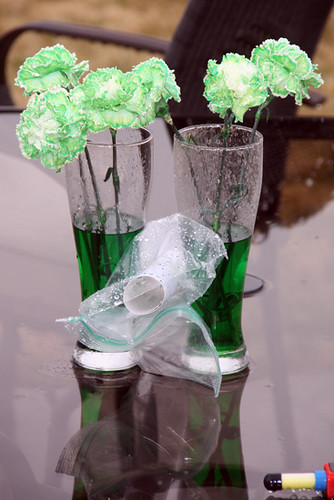 Finally, the kids were led to the last clue that was outside. And, it was raining! So, Leprechaun Nickel left their goodbye note in a waterproof bag. Smart Leprechaun! He had left them each three beautiful green carnations! 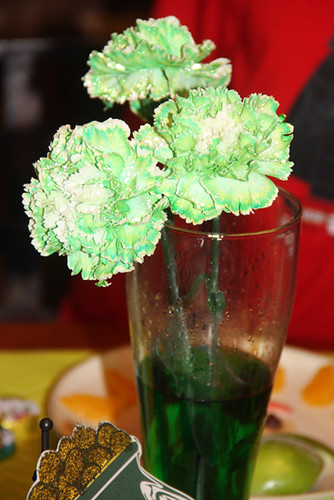 We brought the carnations inside to dry off and opened his last note to the kids. 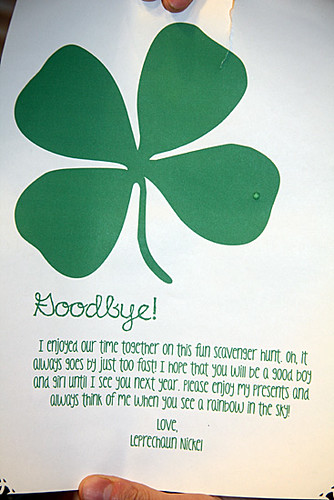 Such a sweet goodbye letter! The kids were sad the scavenger hunt was over, so I told them that Leprechaun Nickel had given me a couple last gifts to give them. That brought smiles to their faces! 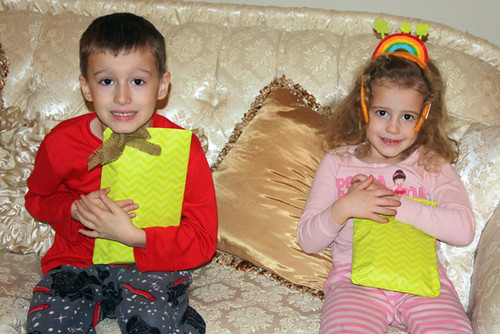 Here they are with their final presents from Leprechaun Nickel. 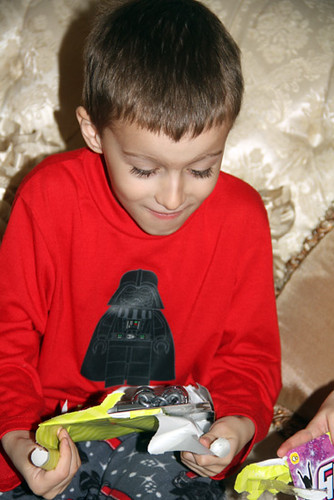 Nathan opening his, you can tell he has figured out what it is and there is pure delight on his face. 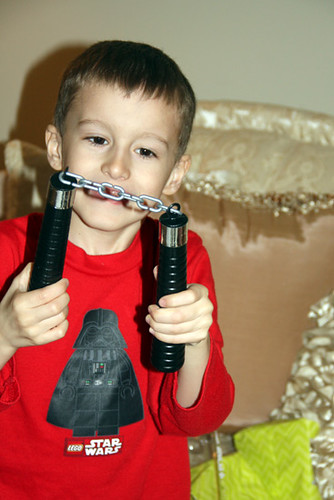 A Ninja kit! He has been begging me for one and I found one super cheap at a Dollar store (one of those dollar stores where everything ISN’T a dollar… hurm… it was $2.50) 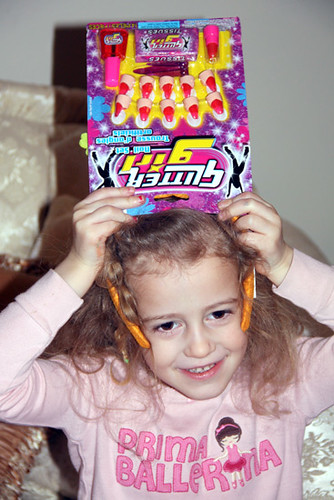 Autumn got a pretend nail kit (ha! much better than the mess of a REAL nail polish kit!) 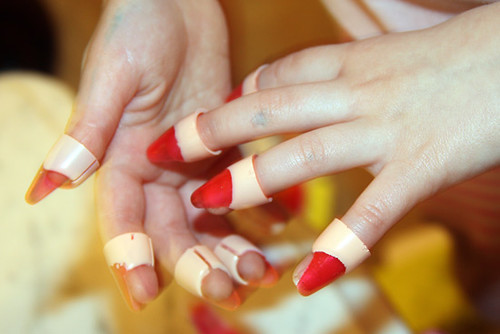 I was afraid they’d be too big for her TINY fingers, but YAY they fit. She loved this $1 gift! It came with a fake nail polish bottle, fake nail clippers and fake lipstick, too! 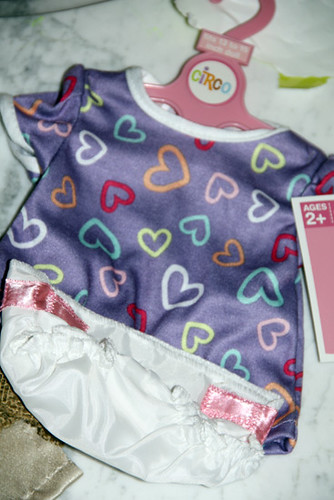 AND, I got her a baby shirt and diaper… Baby dolls are her thing right now.

After our breakfast and scavenger hunt we headed off to the CITY MUSEUM. More on that later!