I have wanted to write about a scary situation that Brian was in last month, but haven’t had a chance to until now. It gives me chills just thinking about it and how it could have turned out differently…

On August 22nd I had free Cardinals tickets that I had won through my work and my Mom agreed to watch the kids so Brian and I could go with two of our friends. I went to my parents house after work and Brian planned to meet me there after he got off work so that we could take one car to the game.

However, when Brian arrived at our house, my Mom saw a lady in a van following close behind him and then she saw her pull along side Brian. She saw the lady’s face and she looked mad and she was waving her arms around, but then she relaxed and smile and laughed. My Mom told me what was going on and when Brian came in the house we asked him who the lady was in the van and what the conversation was about.

That is when we found out about the scary situation Brian had just been in… Brian went to get gas on the way to my Mom’s house and he pulled out on the street in an open lane. A car in the left lane had stopped to turn, but his lane was open so he pulled into it. Well, I guess another car had to pull into Brian’s lane to go around the car that had stopped to turn and they were mad that they had to slow down when Brian pulled into it.

So, the car that was now behind Brian was really mad at him for pulling into that lane and they started to follow Brian. At the next red light, Brian stopped and they pulled beside Brian’s car. The guy on the passenger side got out and started yelling profanities at Brian, told him he was a n-gg-r (which is so racist and yet dumb, since we are white) and he even told Brian he was old! Then, this is where it gets really scary.

He pulled a gun out and shot Brian’s car with it. Now, Brian has a license to where he can carry a concealed weapon and he also knows a lot about guns. Brian knew the gun that the guy was holding was actually a BB gun and not a real gun. The back was open where you pump it, something that I would not have known… nor did the lady in the van that witnessed it knew, she thought it was a real gun!

I really think if I had been in the car alone or with Brian, I would have had a heart attack at this point. Brian was locked in and could not move until the light turned red. If Brian would have had a gun locked in his glove box and if the gun would have been a real gun and not a BB gun, would he have pulled it out? If a bystander had been watching and had a real gun, or even a cop, would the have used it if they did not realize the guy was holding a BB gun and not a real gun? A lot could of happened, but the fact is that the guy with the BB gun was an extreme idiot.

Other thoughts come to my mind, such as Brian’s safety and what I would have done if this idiot guy would have hurt my husband.

Brian was very calm about it and after the red light turned green he tried to speed up to get rid of the guys in the car chasing him. Thankfully, they turned down a street and finally left Brian alone. Brian did not intend to turn down my parents street until he had lost them, not wanting them around my parents house, me or the kids.

Once Brian had lost them and arrived to my parents house, that is when the lady in the van pulled next to him. She had been behind him the entire time and her 10 and 12 year old daughters insisted she follow Brian to make sure he was ok. They had really thought Brian’s car had been shot by a real gun and were worried he was hurt. He told them it had been a BB gun and he was ok besides the nice little dent on his car now.

Brian said the boys in the car looked like they were high on something and there was a girl in the back seat with them that looked like she was drunk. Nice.

We still went to the game, but we were both shook up about what had happened and it sort of made the evening a little somber for us. It is a shame that this happened, that there are people in this world that are in such sad shape as this… it is a shame there is such a thing as road rage. It is a shame that I had to wonder what I would have done if I had lost Brian if they had shot at him with a real gun. It all makes me incredibly sad. Last year I was sitting in the food court at one of the nicer malls in St. Louis and a lady grabbed my purse that I had on the floor next to me. I went after he and grabbed it back from her and she ran. I always wonder if that was a very dumb thing for me to do, what if she hadn’t run off and attacked me? This incident that happened to Brian was in the county I grew up in, my kids go to school in that county and we drive back and forth on that road almost every day. They say life can change in the blink of the eye, but Brian came out safe and I am so very thankful for that. 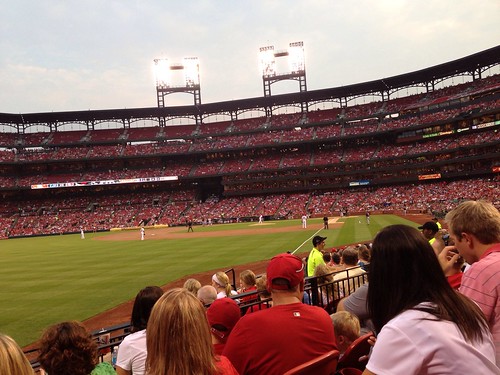 Here is a photo from the game… can I just add, “GO CARDS!!!” We had a group shot, but it was taken on Brian’s phone so this is all I have to give you. I should have taken a photo of the hot dog I ate that night, I think it was the biggest hot dog I have ever ate… it had A LOT of unique toppings. YUM!