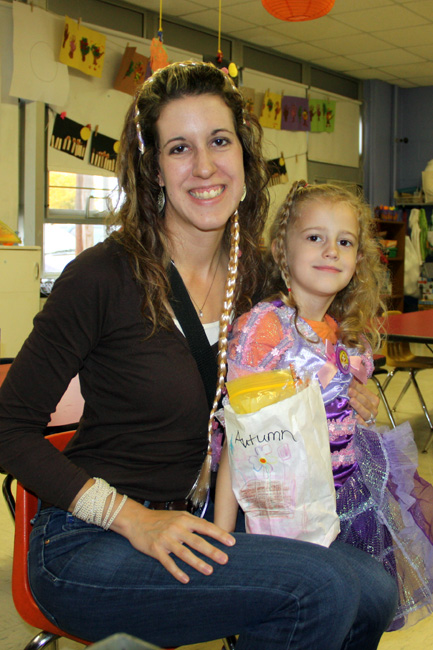 I took off work on Halloween so I could go to Autumn’s party in the morning, have lunch with Nathan and then go to Nathan’s party in the afternoon. Whew. It was a BUSY day. I was wiped out way before trick or treating. But, it was one of the funnest Halloweens ever! Autumn was Rapunzel this year and I put a little braid in her hair since she was complaining about the Rapunzel headband hurting… so, I put the headband on in this picture with Autumn. 🙂 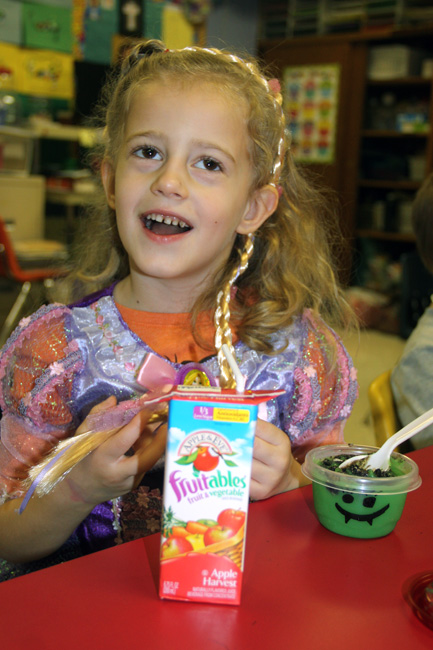 Autumn’s party started out with a yummy snack, I am guessing it was Frankenstein pudding since it was green with oreo crumbs on top. Not many of the kids ate the snack, I think green pudding just seemed weird to them. Autumn only took one bite of hers, so I took it home and brought it in my lunch the next day. Ha! It was yummy! And, did you know if you flip up the sides of a juice box, the kids can hold onto those and don’t squirt/squeeze their juice out as a result? Hey, I learned something new! ha! 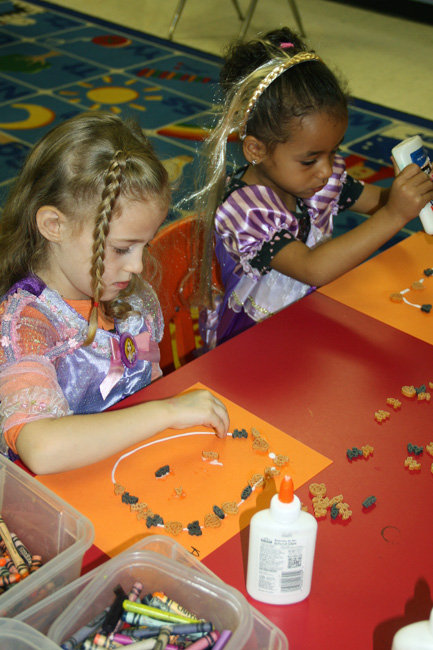 Next was a craft with pumpkin and bats pasta shapes. As you can see, Rapunzel was a popular costume this year. There were 4 Rapunzels in Autumn’s class. 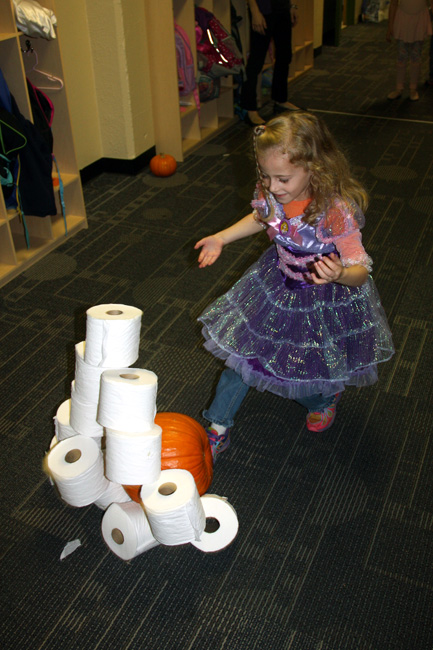 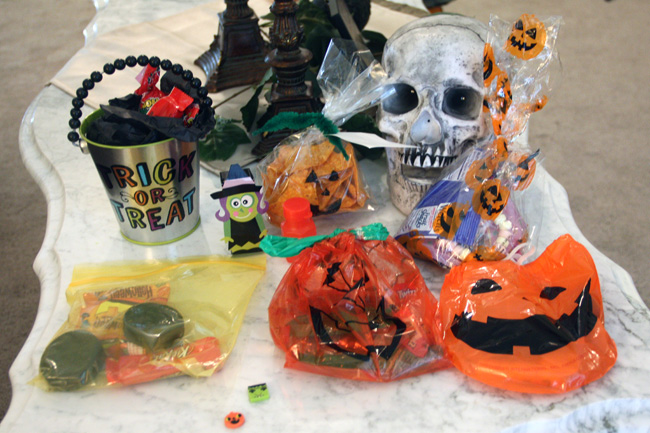 Autumn’s goodies from her party. 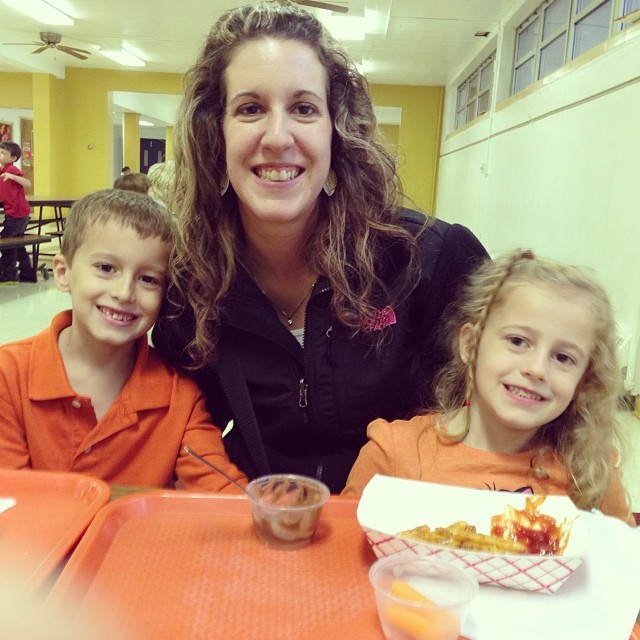 Then, Autumn and I had lunch with Nathan… we had to wait about 20 minutes in the cafeteria for his class to come down and the Kindergarten class came down and sat next to us. The kids were asking me and Autumn all kinds of questions such as who I was a Mommy to, what was I doing there, did Nathan know I was going to be there, etc., etc. THEN, when Nathan came down he was just so excited the poor boy could hardly function. I know, I know… having Mommy at lunch is pretty awesome. I guess. ha. We had a mummy dog and worms in dirt for lunch, the traditional Halloween lunch at school. We sat at a table full of boys and it was LOUD, messy and… well, LOUD. I don’t blame the teachers for sitting at their own table, ha! I really did enjoy eating lunch with Mr. Nathan, though… It was neat to see where he sat for lunch, what one of their lunches is like, etc. 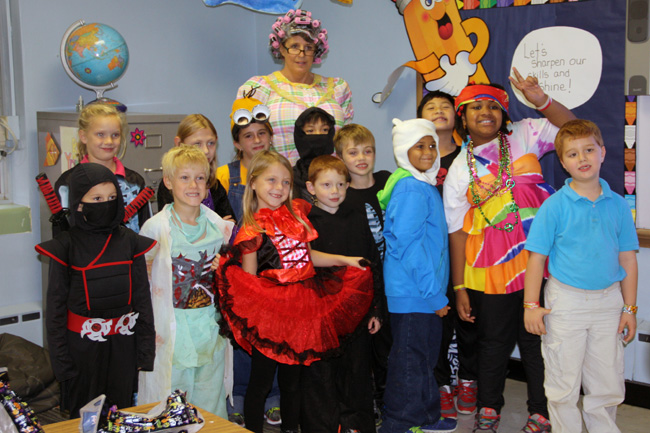 For Nathan’s party, I decided to drop Autumn off at Grandma’s so I could be there for him. His teacher dressed up as an old lady, the kids LOVED it. 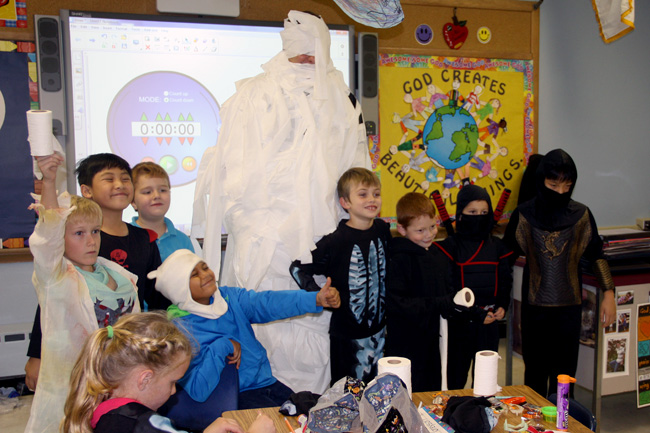 The kids played a game of girl versus boys to see who could wrap their person in the most toilet paper. The girls wrapped up the teacher and the boys wrapped up one of the parents. Ha! The boys won! I brought a pumpkin toss game, but I’ll show that to you in another blog post! 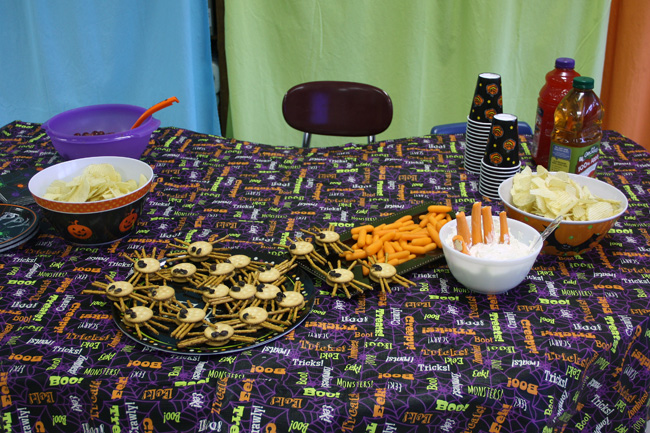 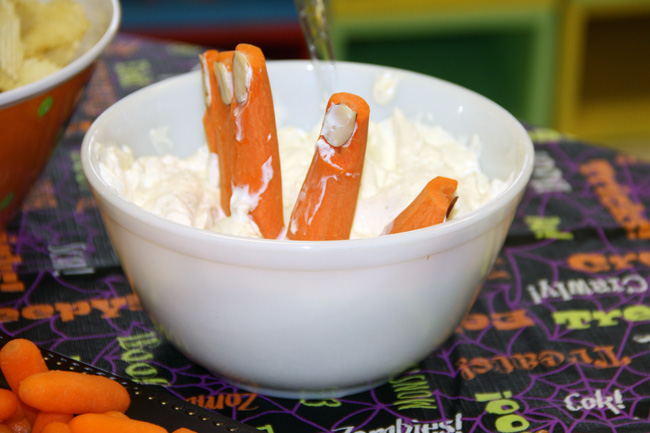 I loved the sweet, salty and healthy foods that some of the Moms brought. Especially the pretzel spiders and the carrot fingers! 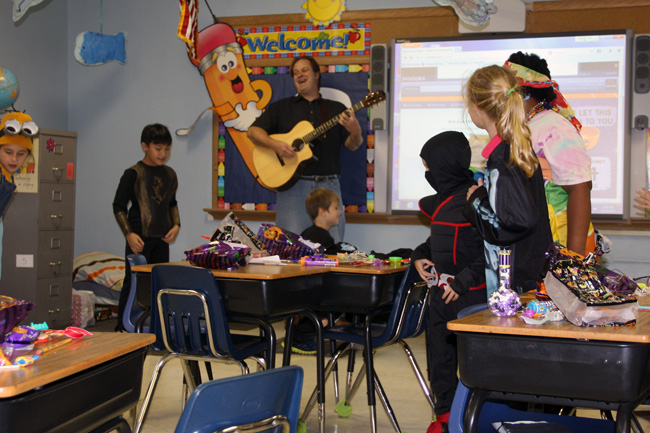 Then they played a lava game where the kids had to try to stay on a mat and if they weren’t on one when the music stopped, they were out. 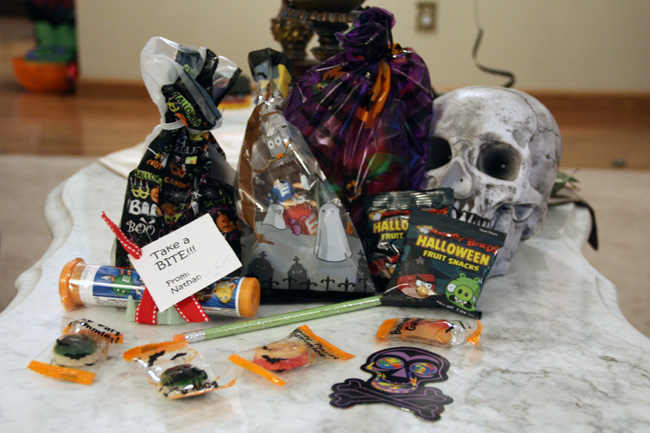 Nathan’s stash from his party 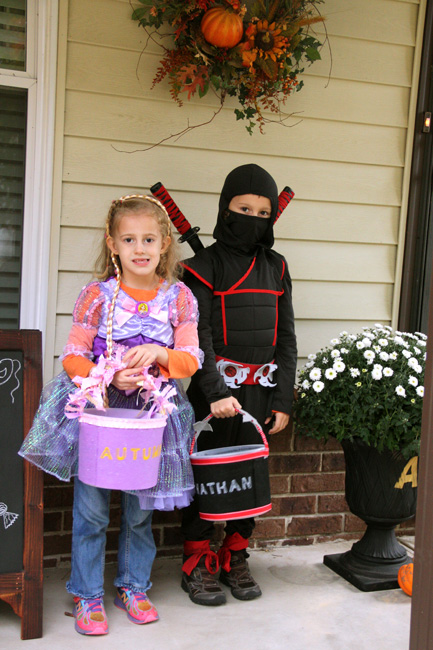 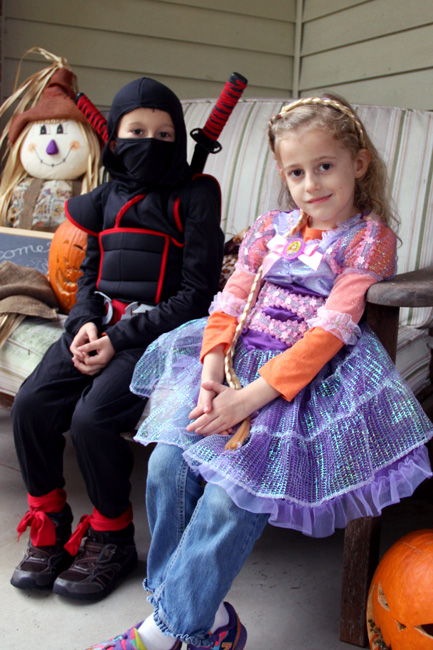 After school I took a couple of photos of them in their costumes on the porch. You can’t tell by this photo, but it was POURING down rain and even thundering! 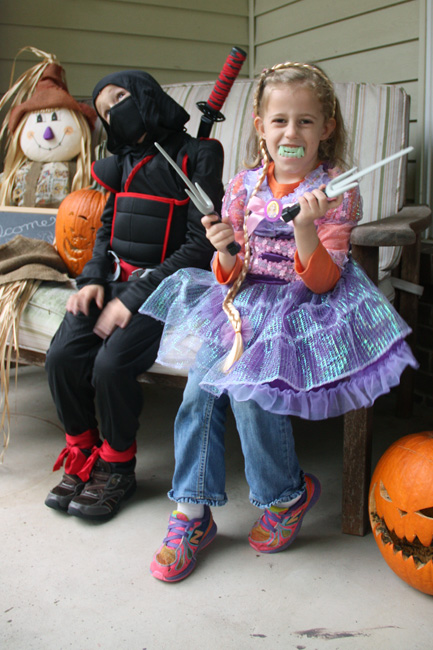 I agreed to take a silly photo of them. 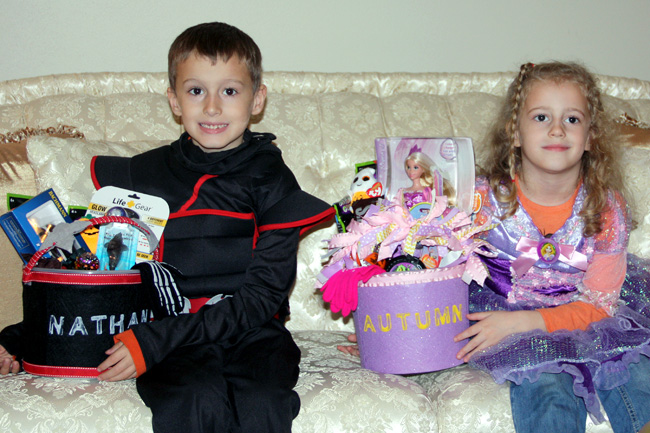 Every year I fill the kids treat baskets with little gifts… I know, they are spoiled rotten! 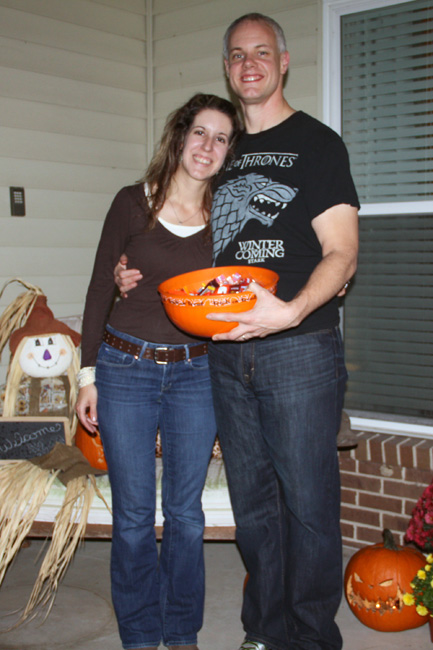 Me and my BriBri. The rain was not working wonders with my hair. 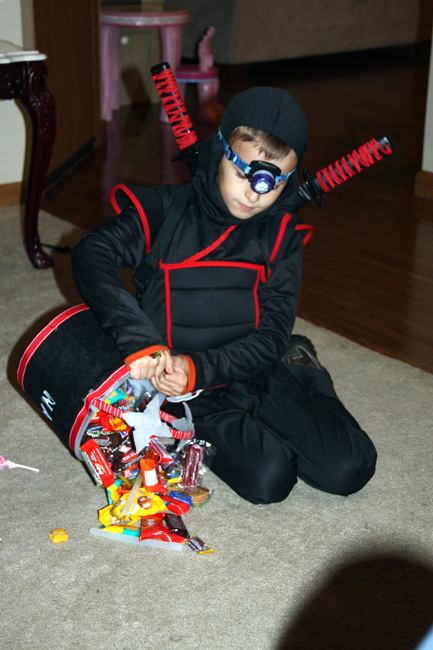 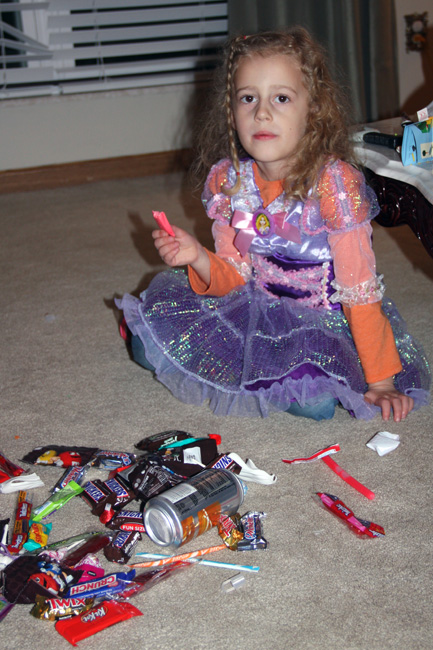 The rain cleared and we took the kids out at 7:40pm and we stayed out until 8:30pm… it was a late night, but better then getting drenched. Once the rain stopped, we did not even need jackets… it was a fairly mild night.

Since I had so many photos I had taken on Halloween, I am going to do a second blog post on the classmates gifts, the pumpkin ring toss game and their treats in their treat buckets. So, stayed tuned for ONE more Halloween post… then, we’re off to Christmas! Just kidding, we have Autumn’s birthday and then Thanksgiving next! Happy Fall Ya’ll!