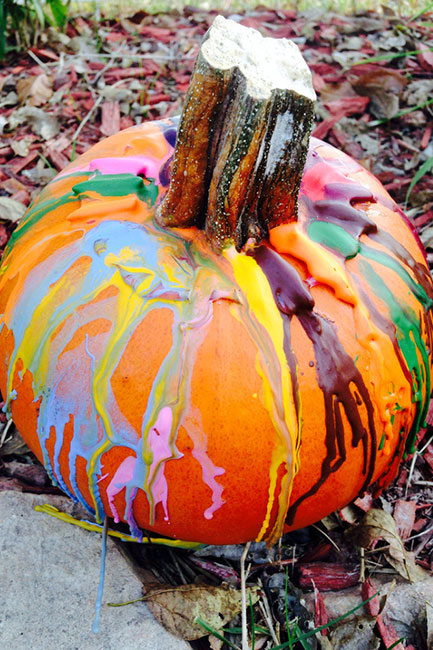 I always love recapping Halloween, it is such a fun holiday. So, let’s start at the beginning… Autumn wanted to purchase a smaller pumpkin for painting, but we later decided to do a crayon pumpkin. Crayon pumpkins are on trend this Halloween, didn’t ya know? They are all over Pinterest… we did have a smaller white pumpkin that I was using for decoration on our front porch, but she still wanted to use the orange pumpkin she had purchased. It was SO easy… you take the paper off of about 12 crayons, break them in half and hot glue them around the stem of the pumpkin. Then use a hair dryer on high heat, but on the lowest speed (so you don’t blow the wax everywhere… trust me, you don’t want to do this.) 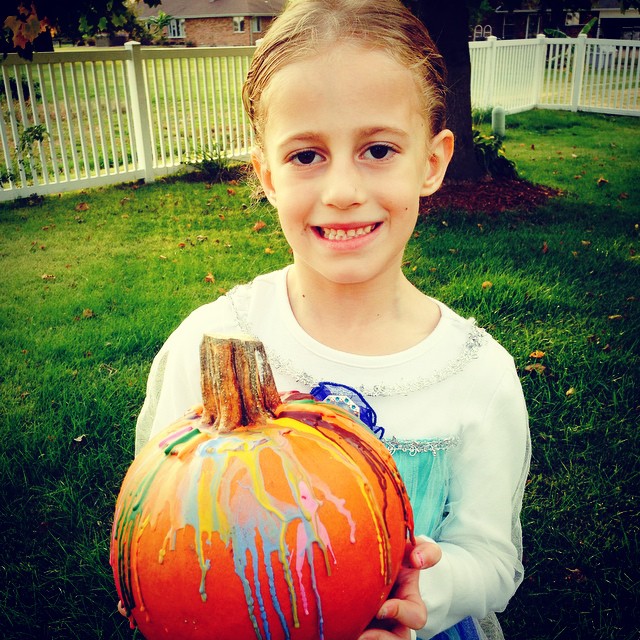 Here is this brown eyed beauty with her crayon pumpkin. She loved it! She is dressed for Trunk or Treat here, but I took NO photos at Trunk or Treat… both kids were running around with their friends and wouldn’t stop for even 5 seconds for a photo. We also didn’t decorate my trunk, because my car was in the shop most of the week from when I was rear ended on the bridge before my half a few weeks ago. 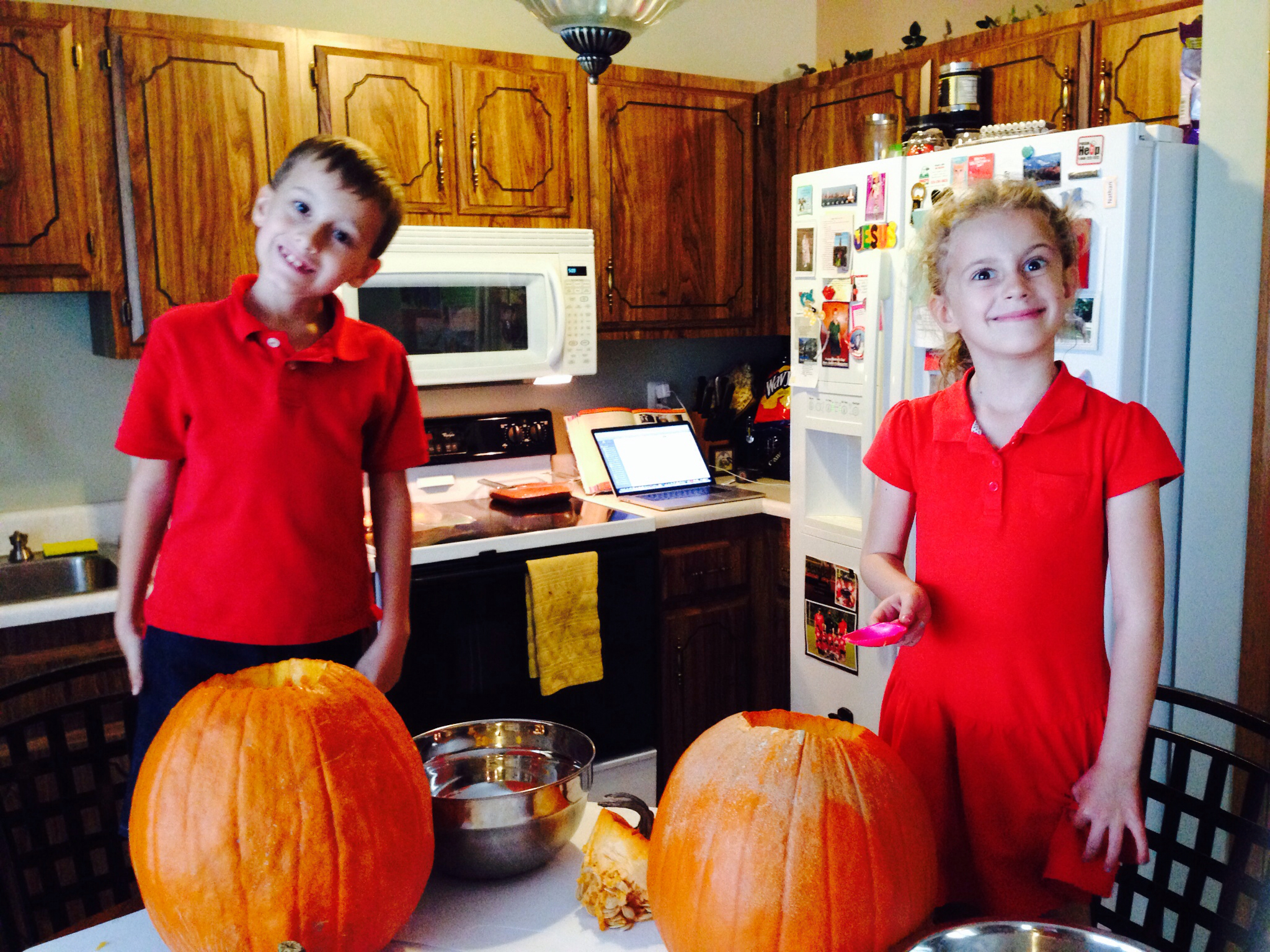 We also carved our pumpkins on the Monday before Halloween. Here are the kids, getting ready to dig out their pumpkin seeds! 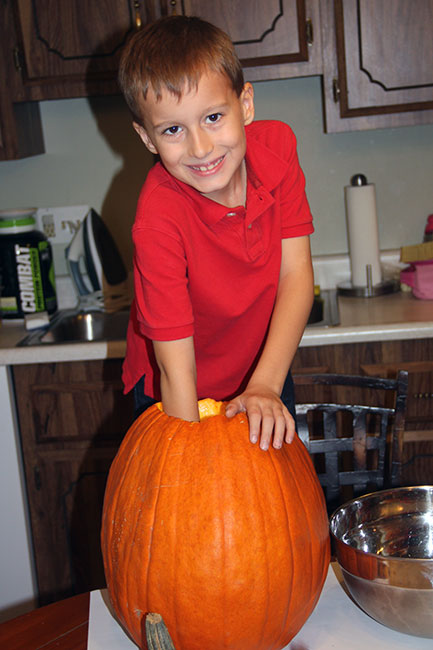 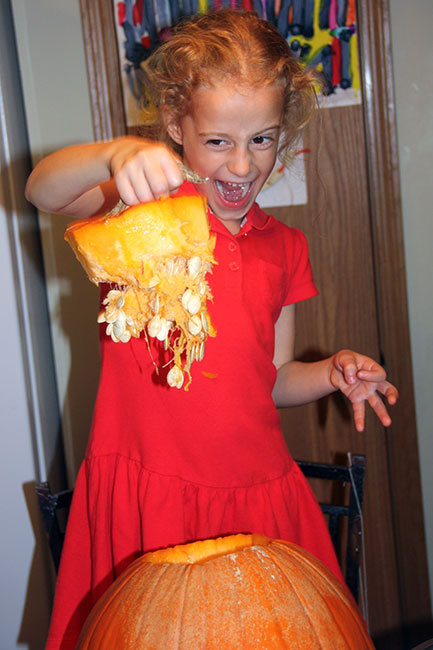 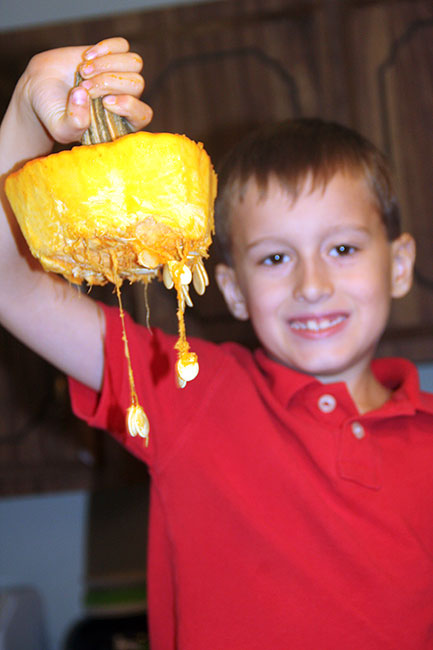 Nathan doesn’t really like ‘messy’ or ‘gooey’ things, so he scooped a little out of his pumpkin and left the rest for me to finish. Now, Autumn had to take out each seed individually to put in a plastic bag, then she got most of the gooky stuff out on her own. Such different personalities. 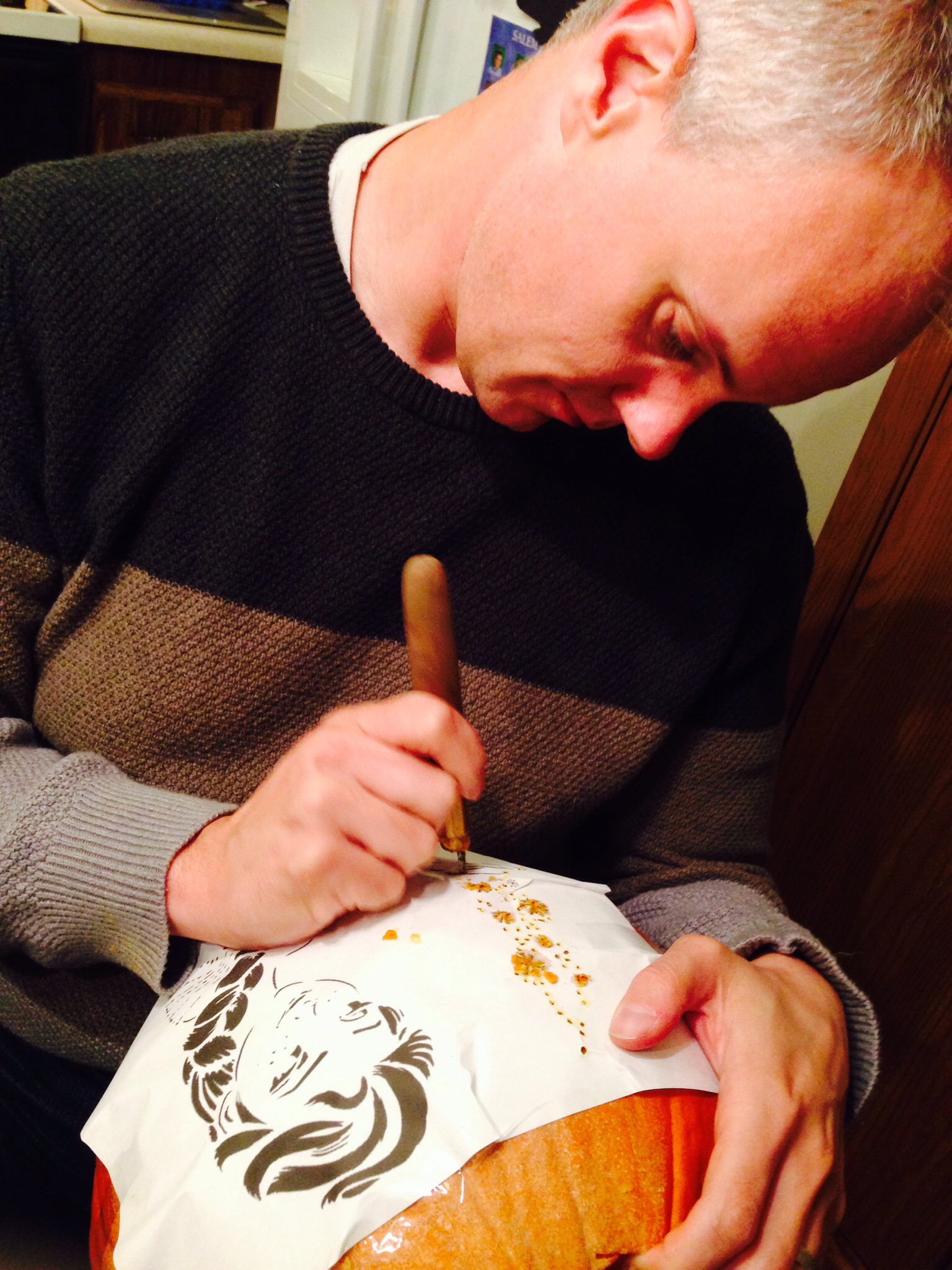 Autumn wanted Elsa and she picked a fairly complicated (to me) design online, so I left it to Brian. He’s good at that kinda stuff. I carved Nathan’s pumpkin, it was a simple boxy Minecraft pumpkin face. 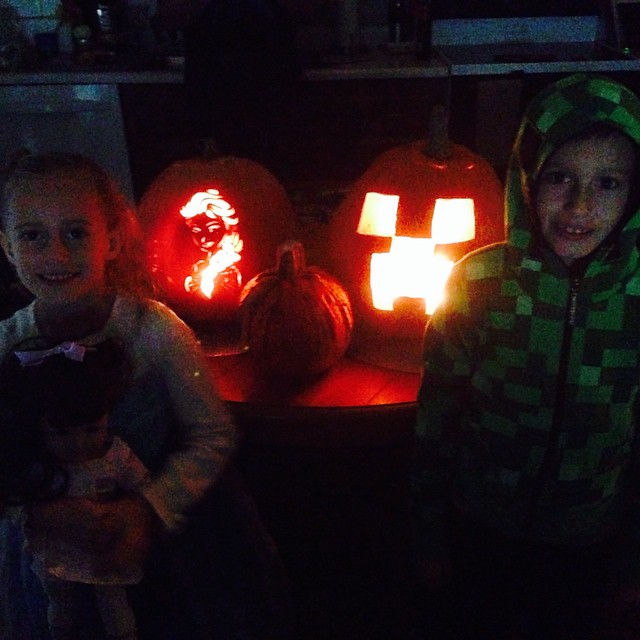 They match their pumpkins! 🙂 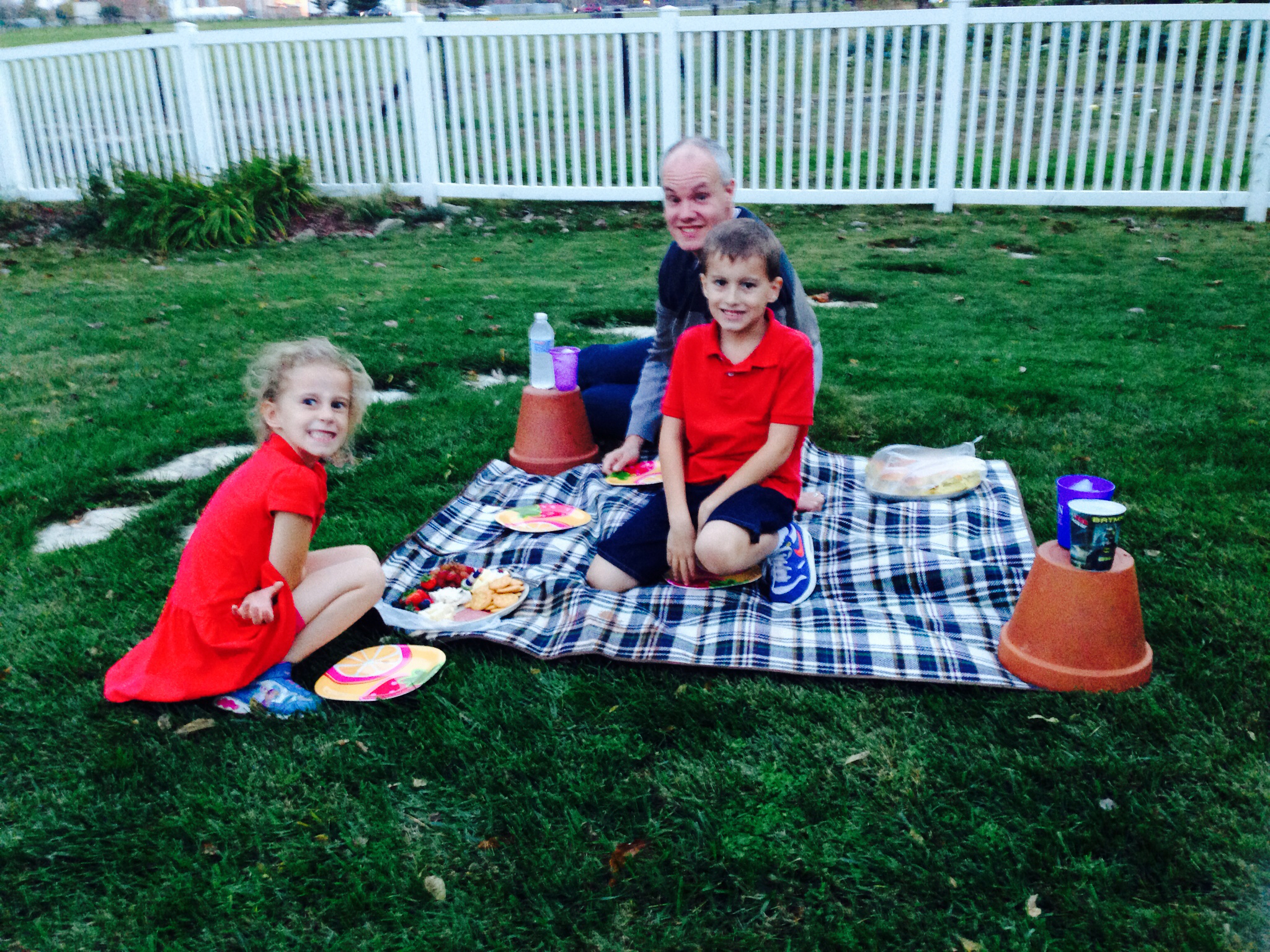 After pumpkin carving, we had a picnic dinner outside. We might make this a tradition! I made turkey and cheese sandwiches, a fruit salad, hard salami and cheese plate, chips and homemade brownies. It was pretty tasty! 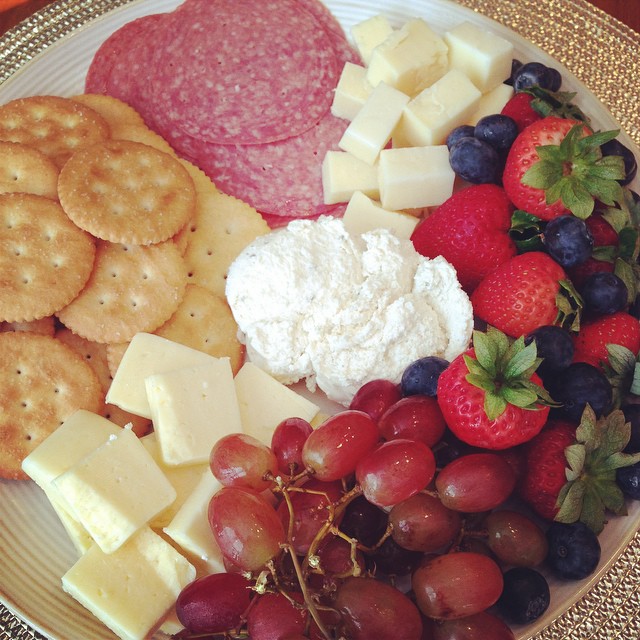 Here is a sneaky peak of the fruit, sausage and cheese plate I made up. I’m drooling! 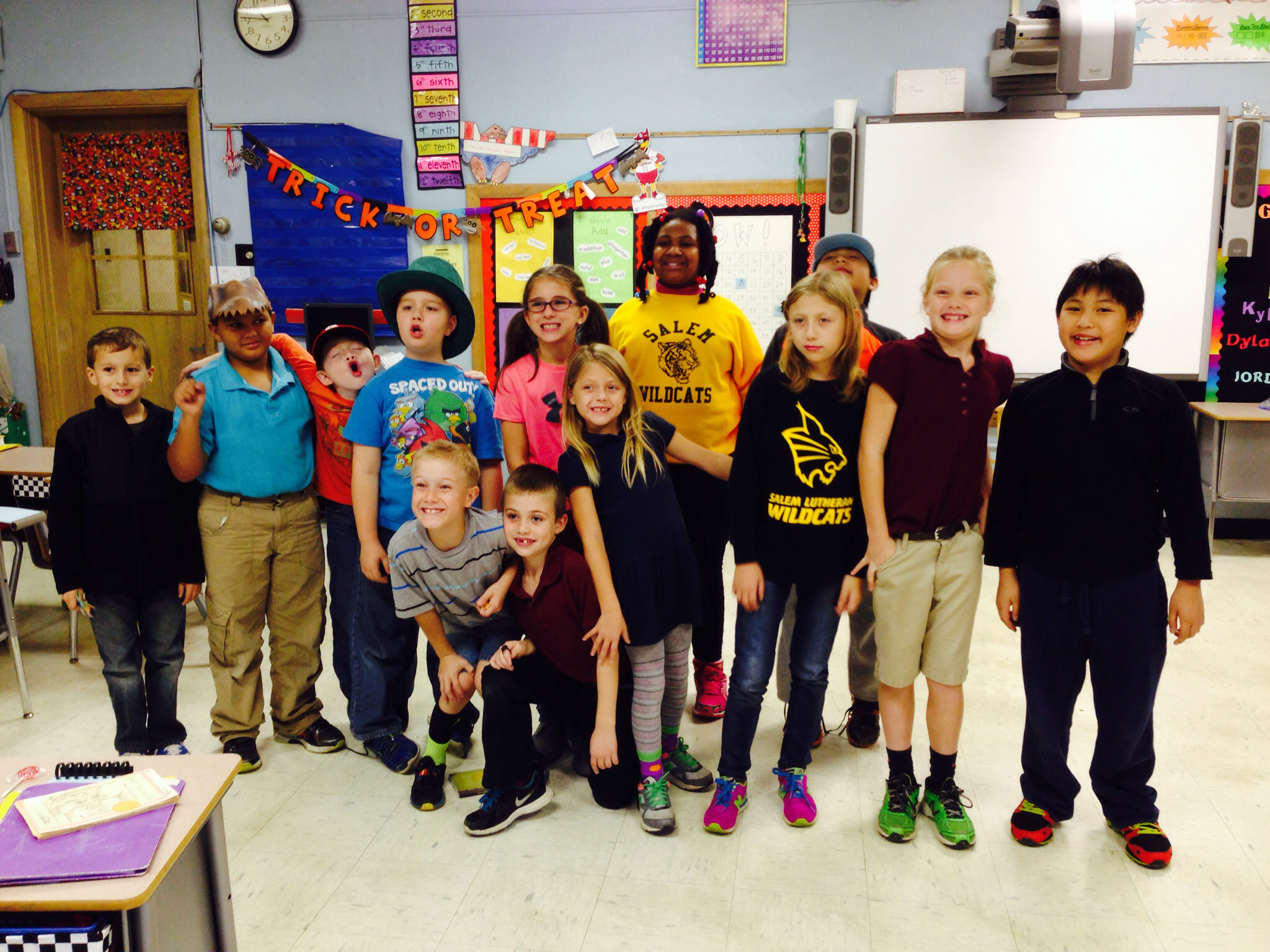 The kids both had their class parties a day before Halloween, since they were off school on Halloween. Here is Nathan with his class during his party. 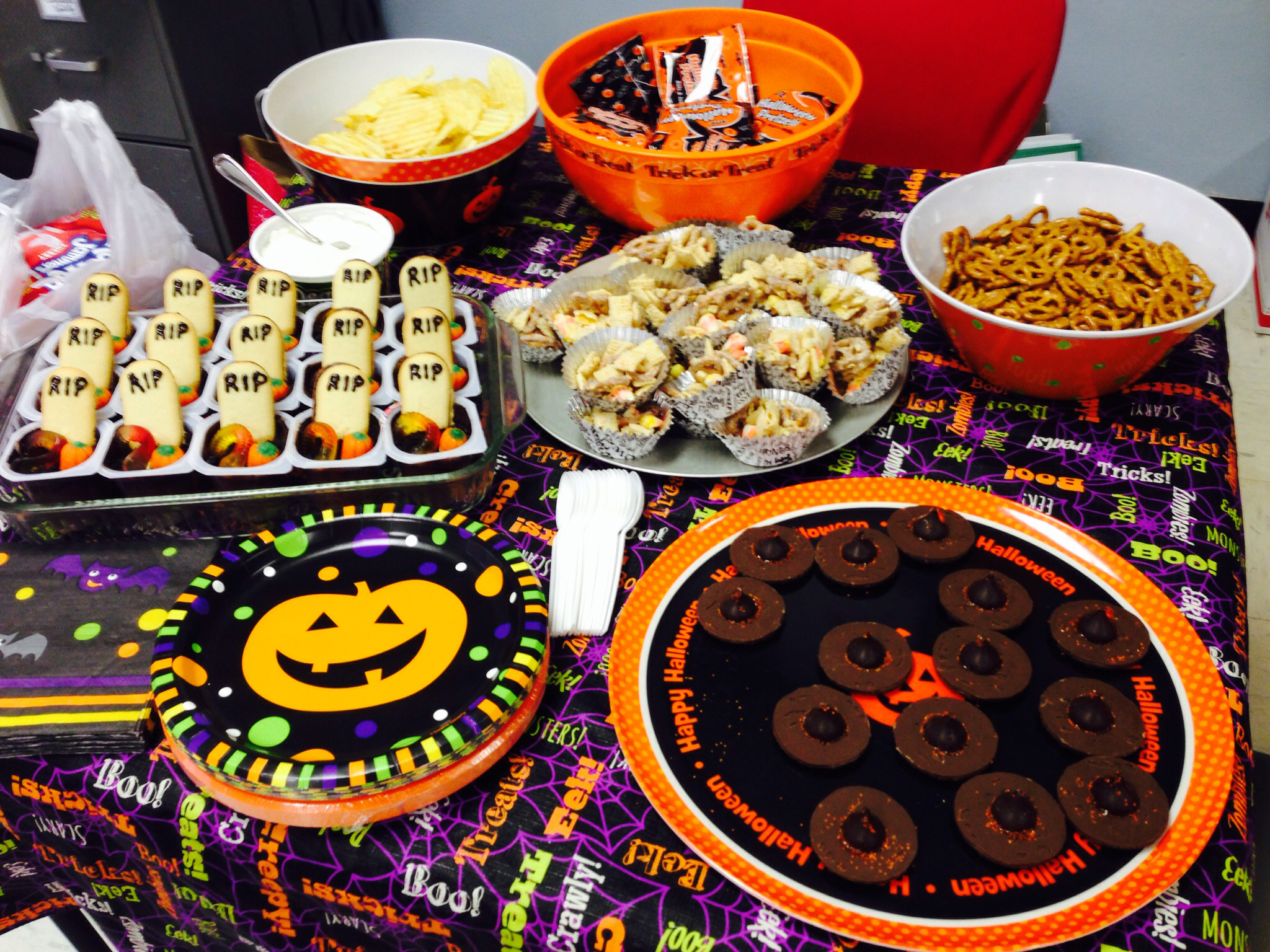 Here is the food table at Nathan’s party… yum! Get in my belly! 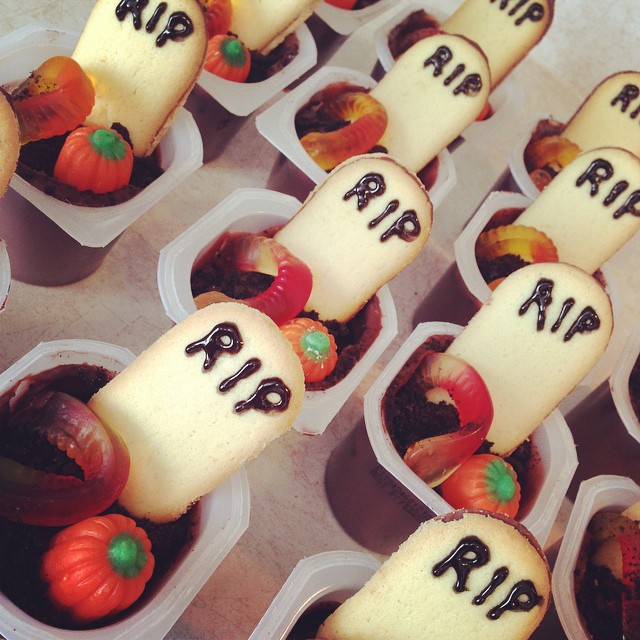 Here is the close up of the treats I made for Nathan’s party. They were SO easy to make, thanks Pinterest. I only had to bring a bag of marshmallows for Autumn’s party, they made a trail mix. 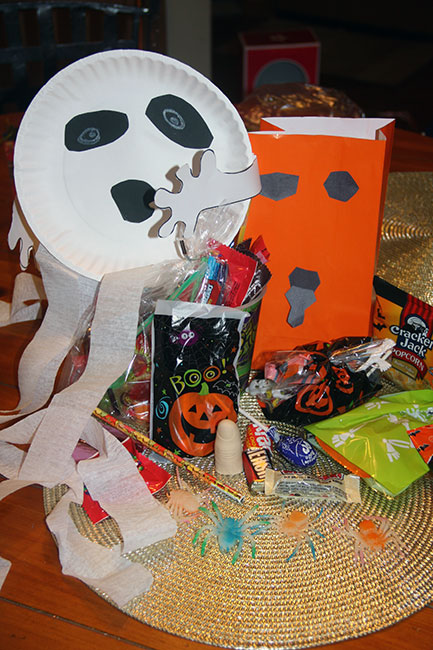 Nathan’s stash from his Halloween party. The ghost and pumpkin bag were crafts he did during his party. I was so sad that I had to take turns at Nathan and Autumn’s parties! They were at the same time… I’ve never had them fall on the same day or at the same time before. I did have my mom come up so they could have one of us at each of their parties at the same time. 🙂 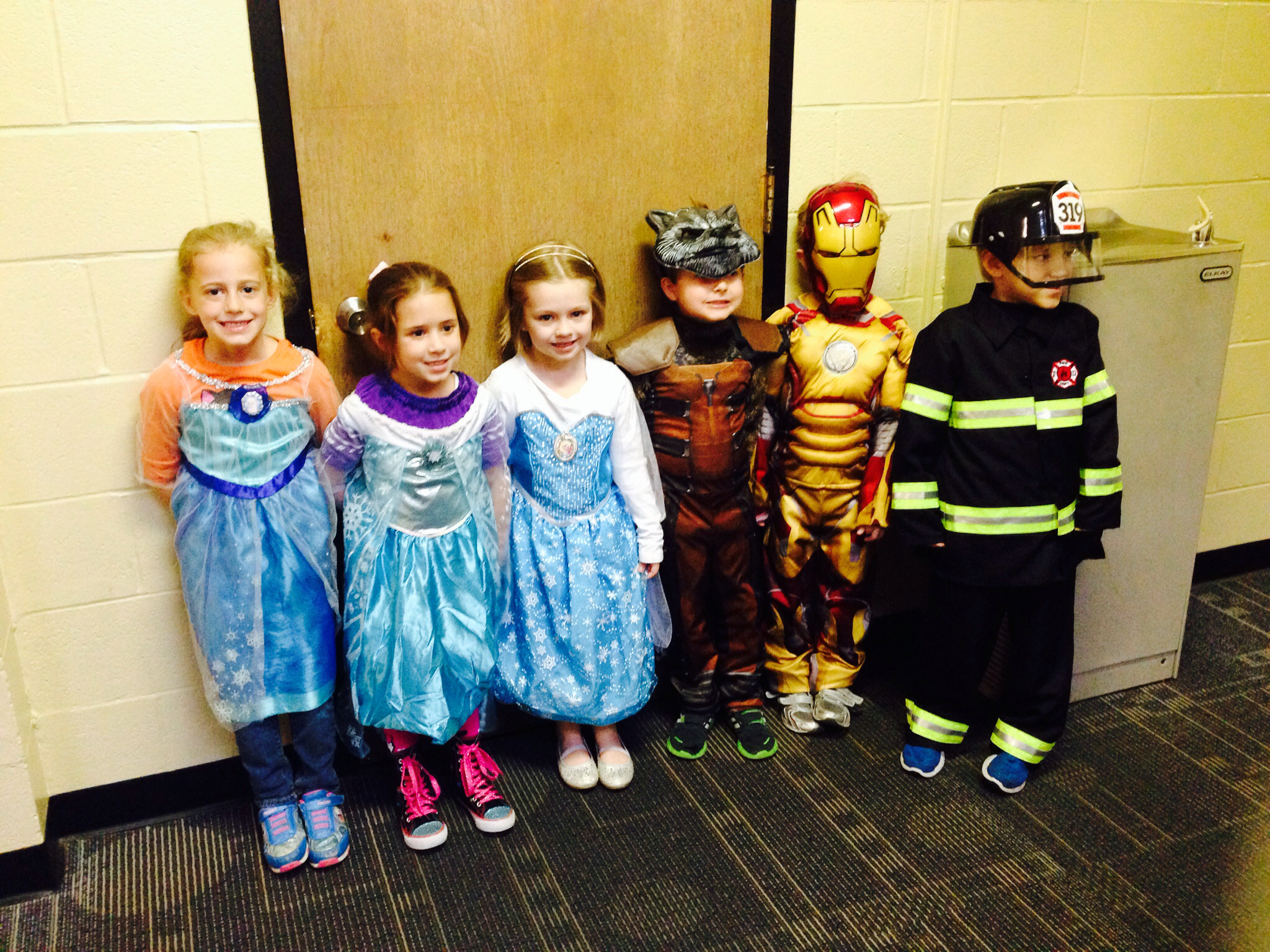 Autumn’s party had a lot of Elsas in it. 🙂 And each Elsa had a different dress… one girls dress played ‘Let it Go’ and lit up! Dang. 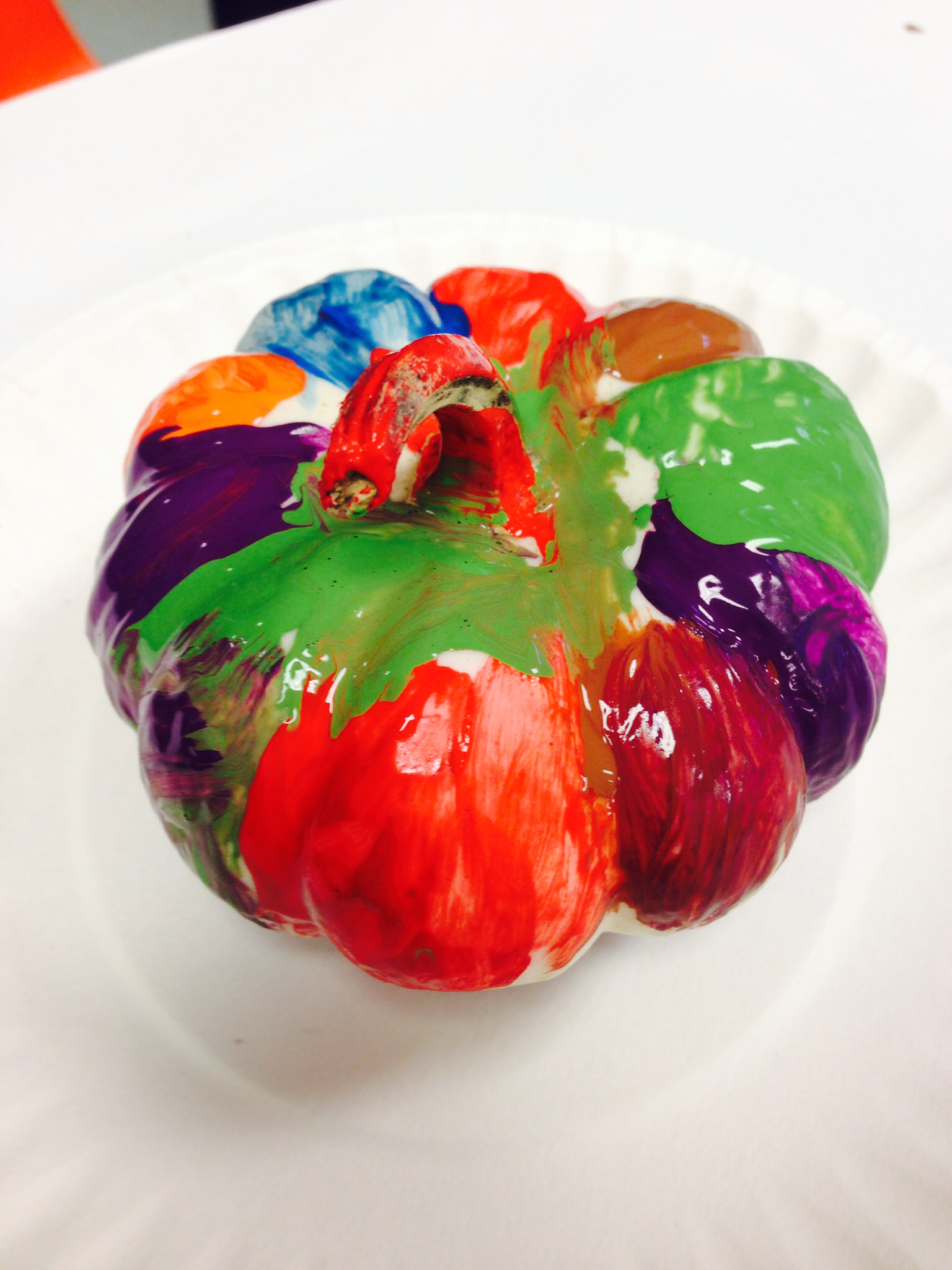 Autumn got to paint a mini white pumpkin during her party. 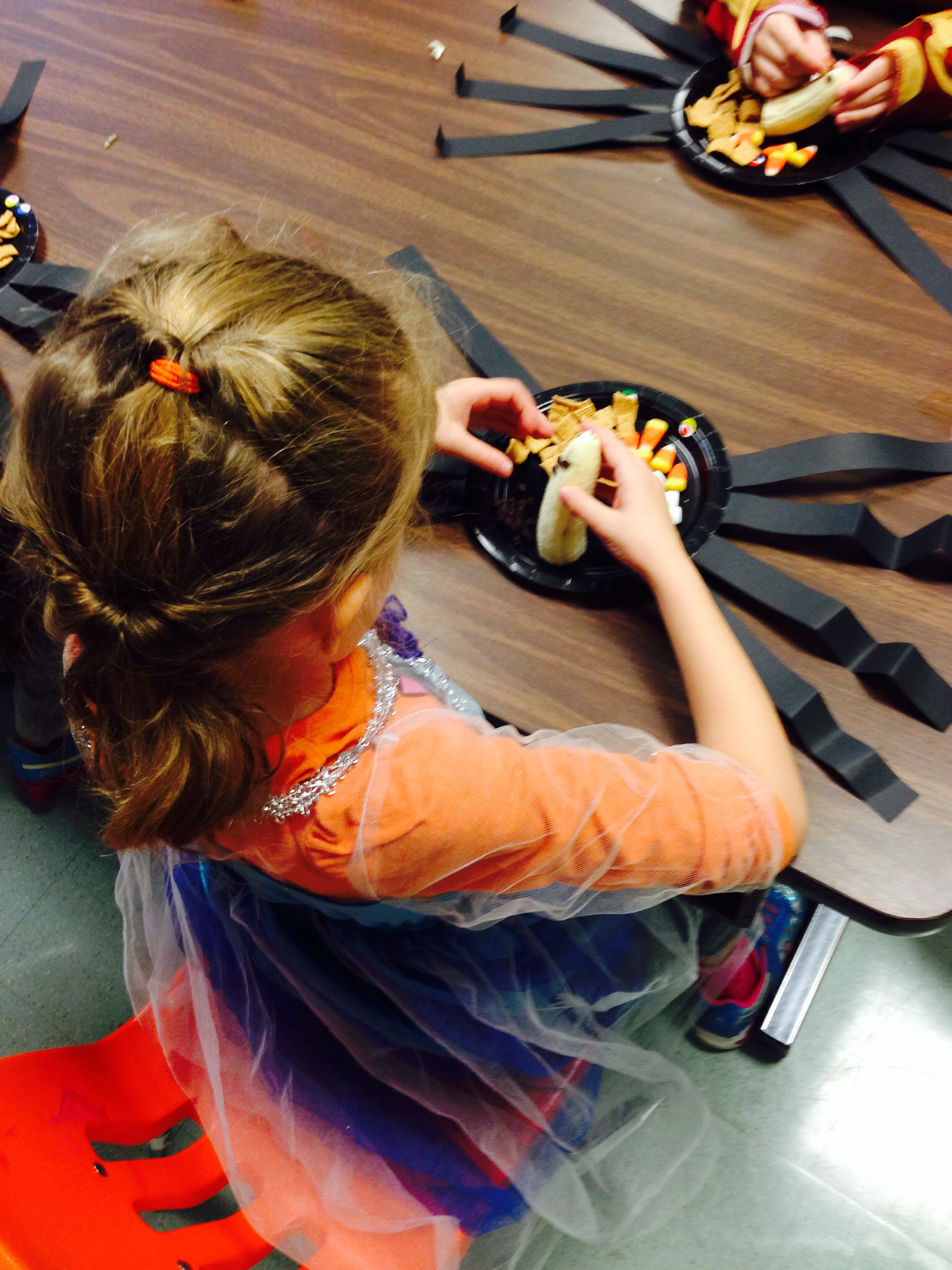 For her snack, they had black plates with little legs to make them into SPIDERS. They got to stick little eye stickers on the black plate. 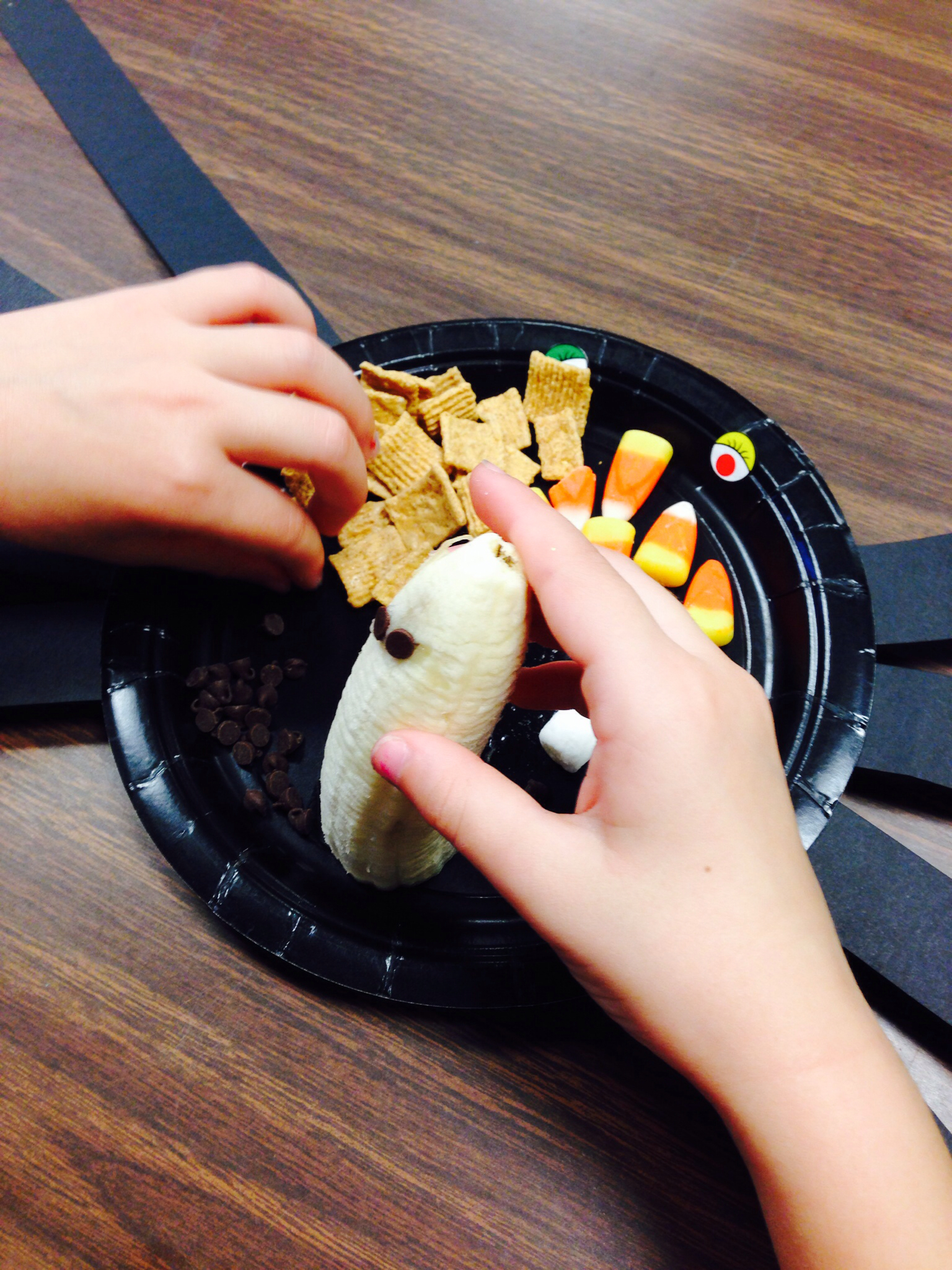 She even got to make a little ghost banana! 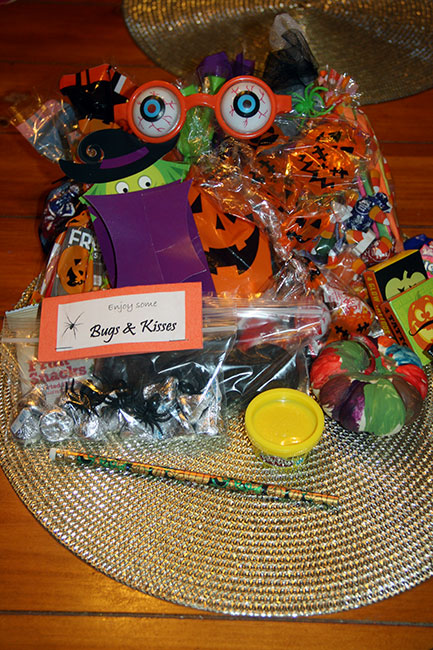 Here is Autumn’s haul. They had some activities in her party, too, such as making their teacher into a Mummy with TP and sitting on balloons and popping them. 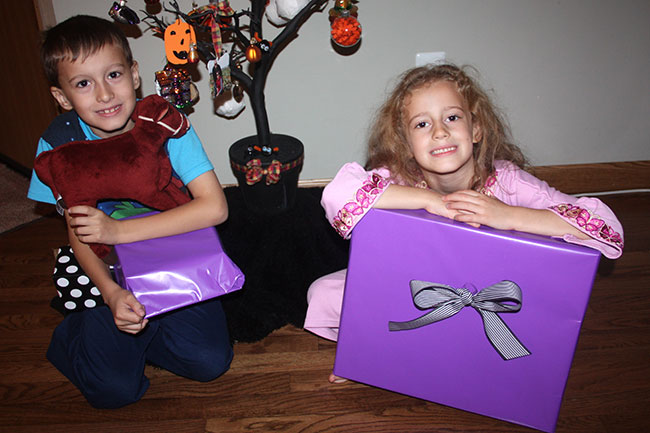 We have a Halloween tree at our house that we decorate with homemade and store bought ornaments each year. Usually I make the kids up a bucket of candy, but this year I decided to buy them some gifts instead of introducing them to even more candy. It worked out really well and they wanted to open their gifts as soon as they woke up! 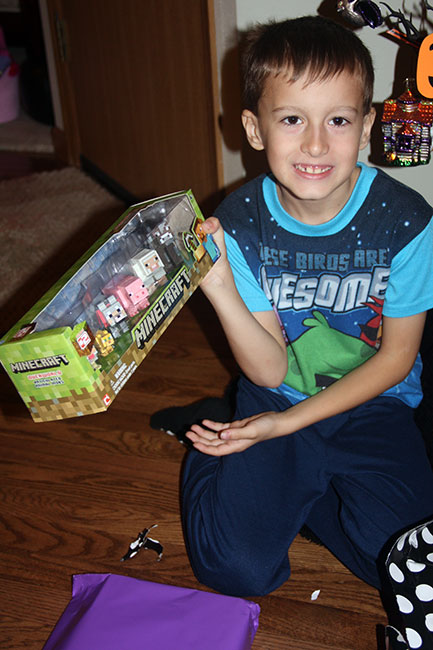 Nathan got some Minecraft farm animals. 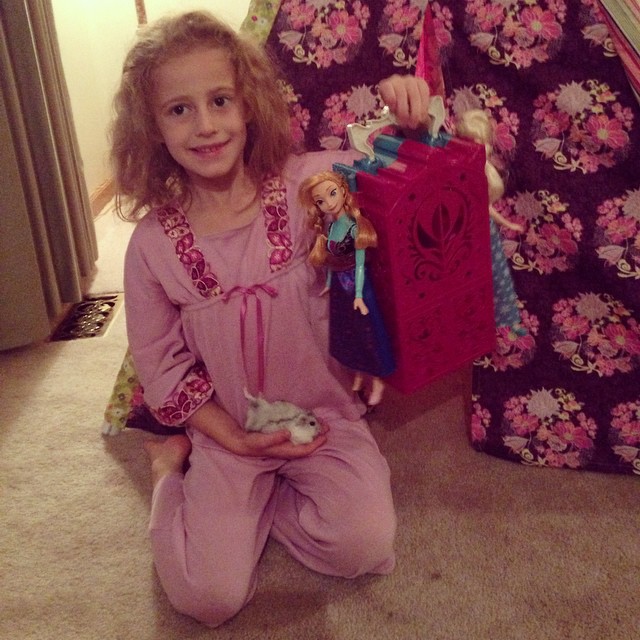 Autumn got the Frozen wardrobe (much cheaper on Amazon, was $20 more at ToysRUs!!) 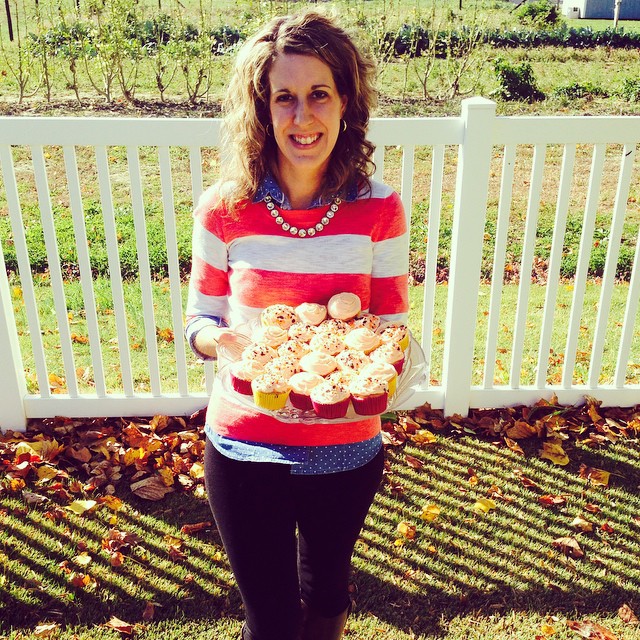 I made some cupcakes and we ordered Dominos and ate with my parents. Brian was home, too, because we were having Charter put in. We have not had TV for almost 5 years in our house, I am so overwhelmed on what to watch… aghhh! 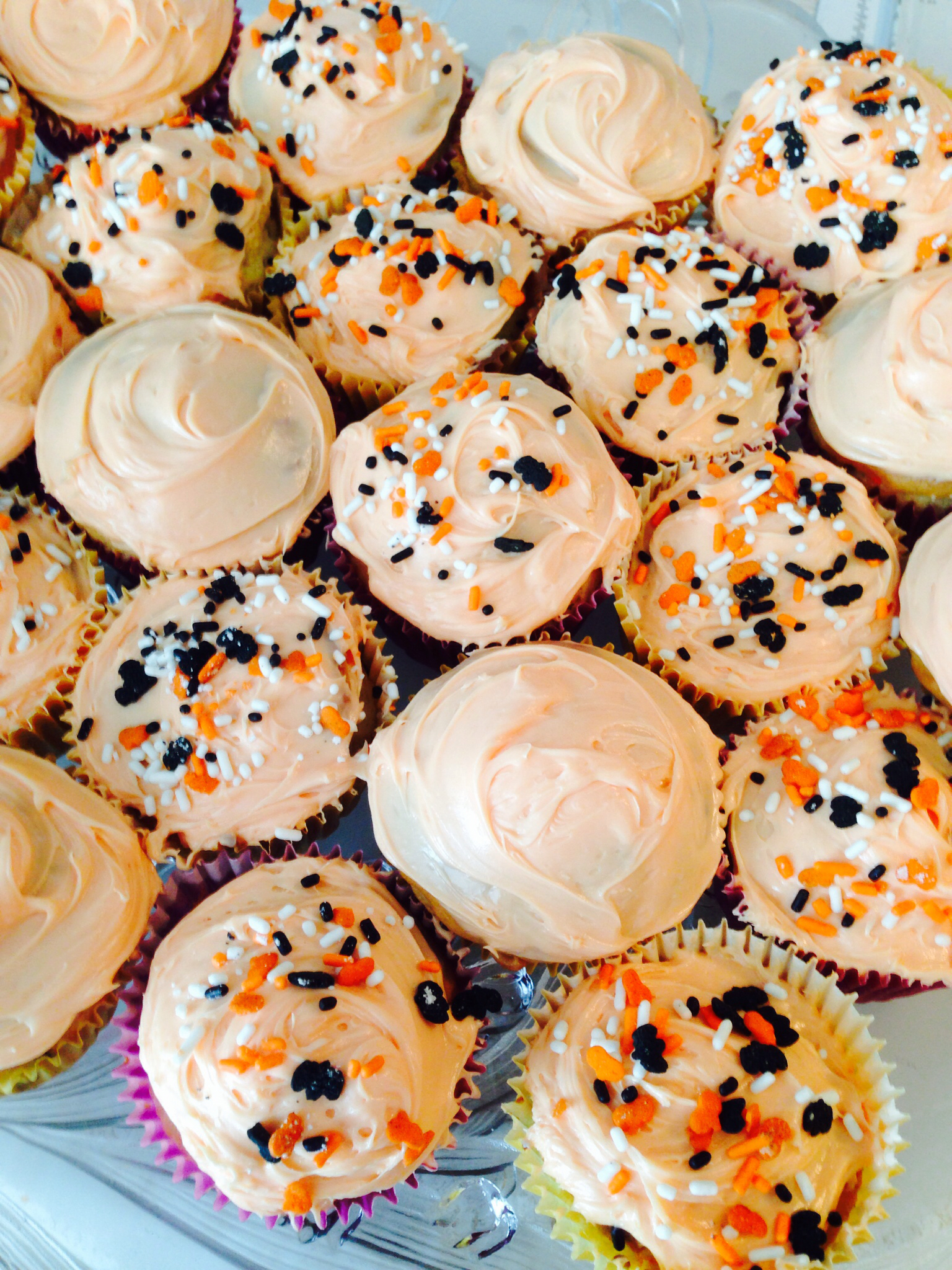 I make funfetti Halloween cupcakes every Halloween. They are the BEST! It was so funny, because I posted this photo on IG and several other school friends of Autumn were baking cupcakes for Halloween, too! LOL! 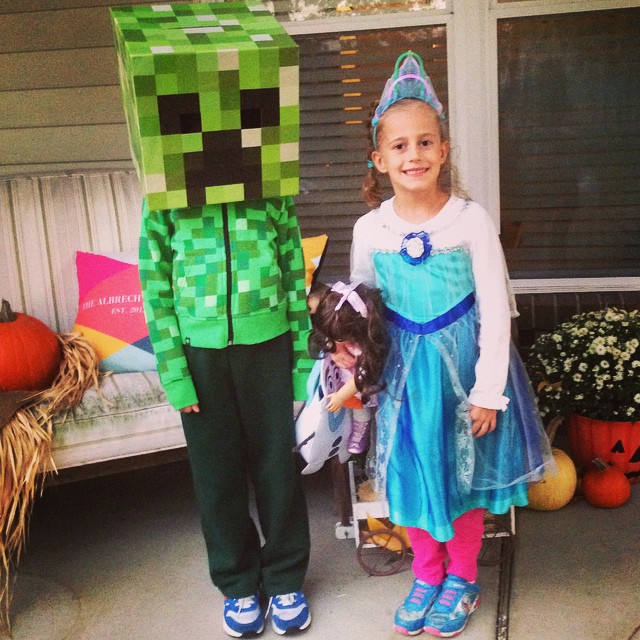 And, here is the official ‘off to go trick or treating’ photo… 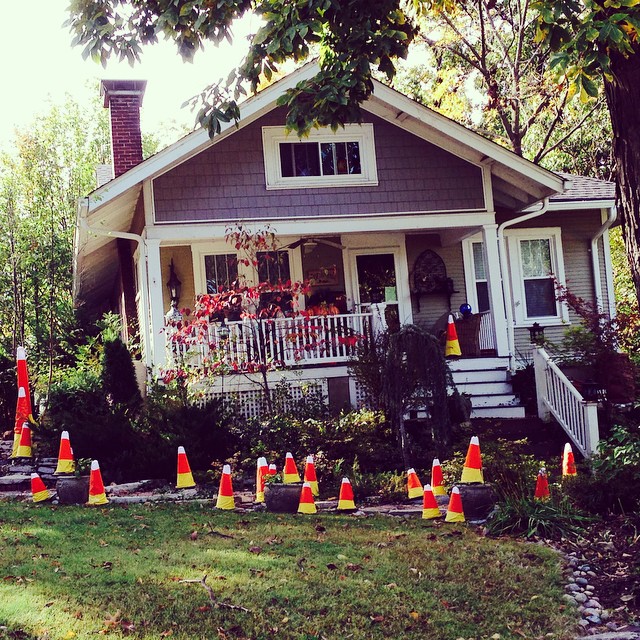 Lastly… I have to share this traffic cone candy corn decorated house with you. We were driving around and saw this house and I made Brian turn around so I could get a photo. Yes, I am candy corn crazy!!!!

Hope you had a great Halloween, too and I can’t wait to read everyone else’s Halloween posts!! 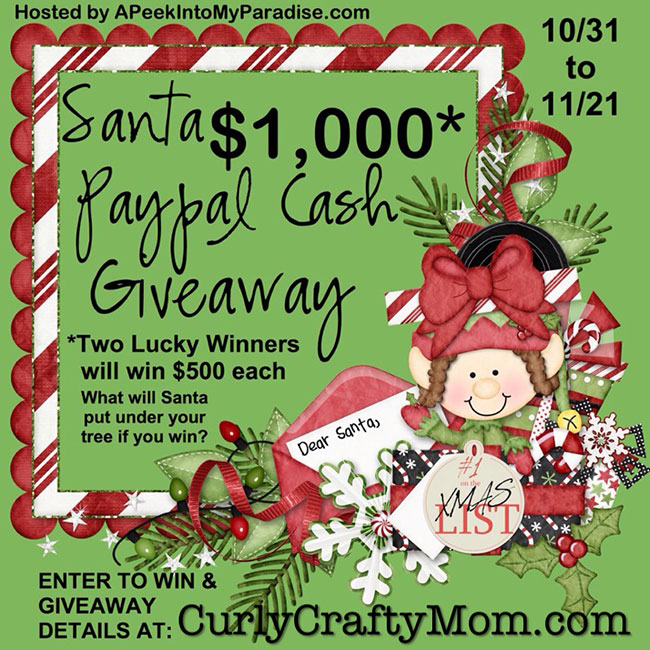