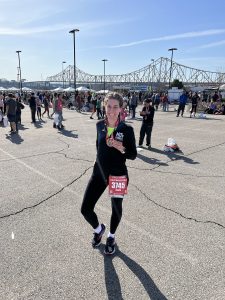 It was such a beautiful day to run the St. Louis Go! Half Marathon last weekend. This is my second half marathon (16th total) since I’ve gotten back into long distance running and I was so excited to shave 8 minutes off my time from my fall race and I kept a 9:59 pace! All while soaking up the race start in Forest Park, the beautiful Art Museum and Grand Basin, Washington University and my favorite breakfast spot Colleens, Delmar and Blueberry Hill as I kept seeing the arch get closer and closer… which was a tease! The new course was amazing… it honestly kept my mind off the fact that I was running 13.1 miles and so many rolling hills. Brian was my photographer and he did such a great job encouraging me and taking photos for me. Some people think I’m crazy for running, but it’s my therapy! It gets me outside, I get to explore new places and it always makes for the best start to a day. 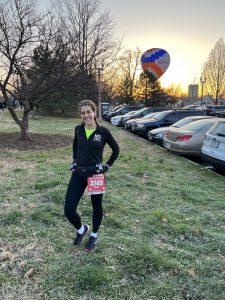 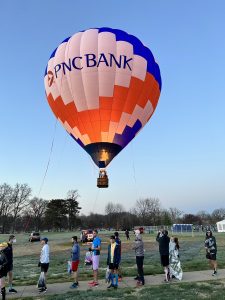 The race had a different starting place then where it ended, which made it a little more tricky for Brian. He parked by the Art History Museum near the start line, I used the port-a potty and then we took some photos before I had to be in my corral. There was a really pretty hot air balloon, so we took advantage of the sunrise and the hot air balloon for an amazing start photo. 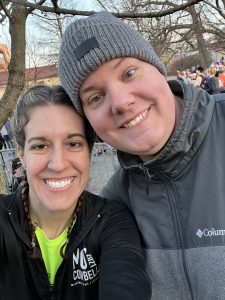 Here is Brian, my sweet cheerleader! Not only did he drive me there, take photos and drive me home, but he also kept encouraging me the night before the race when I started to get some major pre-race jitters. This may be my 16th half marathon, but I STILL GET THEM and they were bad this time! We turned on a movie and I went to bed early and that helped a lot. 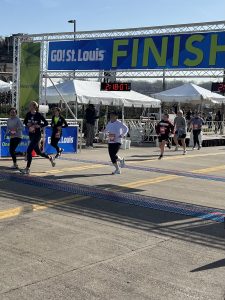 Here I am finishing the race! I have on a black jacket, but you can see my yellow-green shirt peaking out from under it. 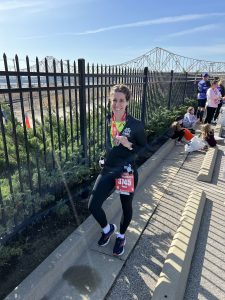 I was SO nervous about this race that I honestly did not look at my Apple watch until I was at mile 11! I just kind of went with the flow and ran my little heart out at a fast, but only a moderately fast pace. There was a really big hill right around the first mile and then there was a lot of rolling hills, some were a bit intense on the uphill. I have a running friend that told me back in my marathon training days to look DOWN, not up when running up a hill. And, you know what? It helps SO much mentally, because you aren’t looking up at that daunting hill.

I felt REALLY great the entire race. I did start to feel a little tired around mile 7 and I had planned to take my second glucose gel pack at mile 8, but I decided that it takes me about half a mile to digest it all (I’m slow and it is sticky stuff!), so I start at mile 7.5. By the end of mile 8 I was feeling GREAT again! I used to only take one glucose pack per half marathon, but I’ve changed up my game on this and it has helped me GREATLY. On the drive to the race, I take a Verb caffeine bar, then 40 minutes into the race I take my first GU gel glucose pack. Then, after another 40 minutes I take a second glucose gel pack, but one with energy/caffeine in it. Wow… I felt great, start to finish! I have been doing a lot of the iFit marathon workouts on my treadmill (I did 4 total– Chicago, New York, Boston AND London) and during these series of runs, they helped me to figure out a better system for replenishing my glucose while doing these long runs. I have also started carrying water and Nuun flavored water on me, so that I can go right through these slow water stops and keep running. I try to drink a few sips at each mile while running. For this half marathon, I did 3 runs a week with my longer run outside. Doing the long run outside each week helps me SO much, because running on a treadmill is not the same. During my long runs outside I could test out what running clothing worked best for different types of weather and I had the elements/temperatures to learn to navigate around. 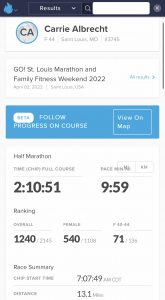 So, for this race I was all nerves and like I said above, I did not look at my Apple Watch until the end of mile 11! They did not have a lot of mile markers up (or maybe I missed them?!), but I did pass some pacers, so I knew that I was doing better than I had hoped! One thing that I really need to work on is running a regular even pace (not starting out too fast, which I did at my fall race) and I’d also like to work on having a negative split (faster at the end of the race than the beginning). Another goal I have set for myself is I want to try and do a sub 2:00 hour half marathon by my 50th birthday. That is 5 years!! I’m going to work on gradually bumping up my speed on the treadmill and outside for each race and go with that plan. I think I may also look at doing one of my shorter runs outside on a hilly course to help me with hills. Fortunately, for the fall race, you train in the summer and I’ll have a little more wiggle room. I’m also considering doing another FULL marathon for my 50th birthday in 5 years. But, I could very well change my mind on that one! Ha, ha!!

I really enjoy looking at my splits after a race. I did stick to a fairly steady pace during this race, which is amazing since I wasn’t pacing myself against my Apple watch. I was just running at a pace that felt comfortable, yet challenging to me. 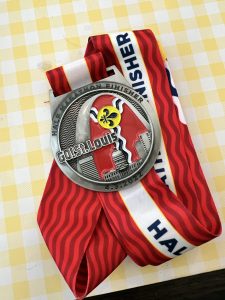 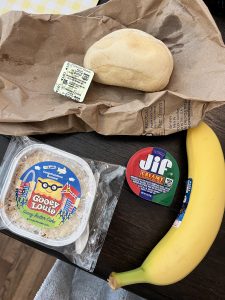 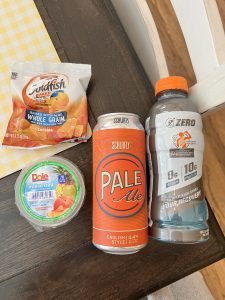 Ok, so it is always fun to show a photo of all of the free food afterwards! I usually don’t eat right after a race, because I need some time to adjust mentally/physically. I did drink some water and then after I went home and showered, I enjoyed some food! Gooey butter is a St. Louis food, so it was exciting to receive a little slice of it! I also received a roll from the Pasta House and some other treats… including a beer! 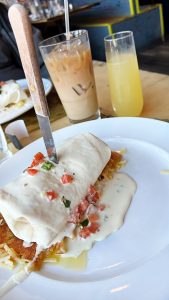 After I rested up at home, we went to The Shack for BRUNCH! I had an iced vanilla coffee, mimosa and a breakfast burrito. Yes, yes, yes!!! All in all, I was really pleased with my race! AND, I am so glad I can rest up a little bit until the next one!