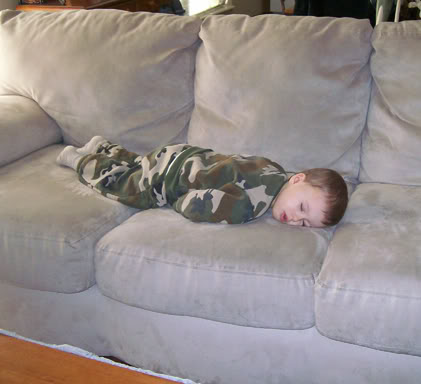 Nathan woke up with my cold this morning… I felt so bad for him. He kept telling me he was not sick. He ate a hearty breakfast of oatmeal, then wanted two waffles an hour after that… then some Ritz crackers. So, at least he is eating!!! His nose is a faucet so I gave him some children’s Benadryl but it really did not help dry it up. I am guessing his throat hurts like mine did. Around 10 am he said he did not want to be sick. Poor boy! I let him vedge infront of the tv and he laid on the couch and fell asleep. This is sooo not my Nathan, he is always on the go! So, I took a picture of my poor boy asleep on the couch. Jeremi took a half day at work to help out, and thank goodness he did because Autumn was a light napper and really fussy today! It’s amazing how good of a day I had with them just the day before and then today was just so exhausting and stressful. Sigh. Tomorrow Nathan will go over to my parents house during the day since the roads are finally plowed. 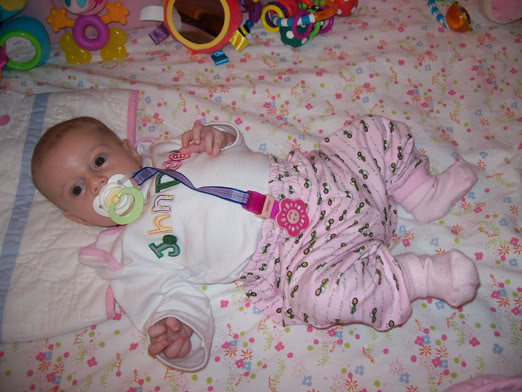 Jeremi went to the store today and I told him to pick up a pacifier clip for Autumn. What a life saver!!! I cannot even mention how many times her pacifier falls on the floor each day! This will def. cut down on the germs. Here she is wearing it with her cute John Deere outfit on that Uncle Jeff got her for Christmas. 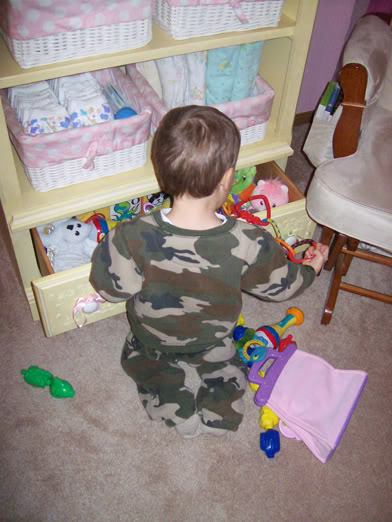 Nathan found out where I have all of his old toys/rattles hidden at in Autumn’s room and he enjoyed playing with them. I sort of wish he hadn’t found them, though, because now all his germs are on them with his cold! Blehh! He found Autumn’s Fisher Price Laugh and Learn purse and took the fake dollar bill out and said, “buy Hot Wheel with this?” Smart boy!