Today I took Nathan to the Oakland House, which is in Affton near where my parents live and where Nathan will be going to preschool come next month. Its been there forever, and I have been wanting to go there with Nathan the last couple of years but it hasn’t worked out for me. I met one of my coworkers at the house, because she has kids Nathan/Autumn’s age and her husband also grew up in Affton like I did, so she was excited to see the big mansion in Affton, too!

Unfortuantly, I did not take Autumn because she takes her morning nap around the time that we went, but it was fun to go out with just Nathan as I haven’t done that in AGES! I do feel a little bad because Bonnie (who is just a few months older then Autumn) seemed to really enjoy herself. Oh well, I figure there is always next year! 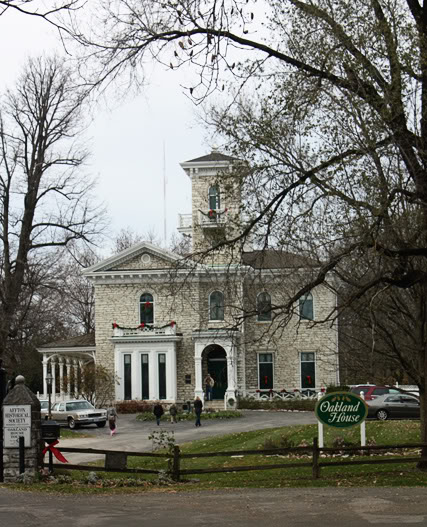 Here is a picture of the Oakland House from my car… I love the little ‘lookout’ (I am guessing it is a bell) tower on the top of the mansion. 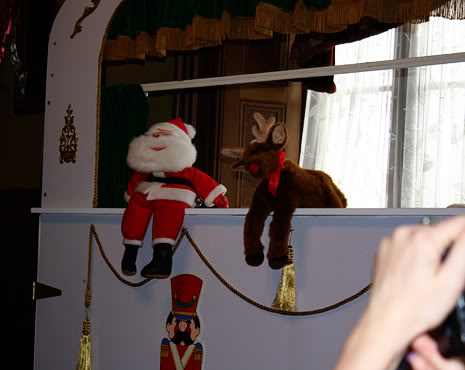 It started with a book reading and then a puppet show which was really cute. Unfortuantly, Nathan had to sit through it twice because my friend Cammie was running late. I would have waited for her, but I didn’t realize they were going to start the puppet show so fast, and it was so crowded in the room that there was no way I could get past all the kids to get Nathan back out of the room. SO, of course, Nathan threw a fit when everyone went into the next room and he had to sit and watch the puppet show twice. UGHHHH!! 3 year olds!!! Cammie gave him a peanut butter cracker and that helped a little, but geez, I felt sort of bad because Cammie felt bad she was late because Nathan started crying… (And, usually I am the one that is late!) Oh well, what can you do? Kids are kids!! 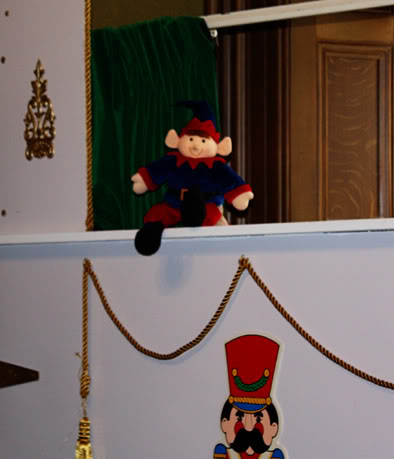 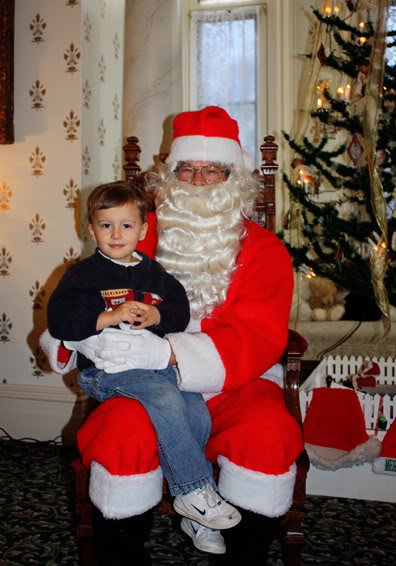 After the puppet show, Nathan was still bitter over having to sit through the puppet show twice, and actually started rolling around on the floor while we had to wait in line for Santa. Why me? They were selling little ornaments and things on tables so I tried to interest him in those while we waited. Jacob told Nathan how him and Bonnie got a book this morning because it was St. Nick’s day. I really need to celebrate that with the kids next year. Anyway, finally it was our turn and Nathan got to sit on Santa’s lap, which I think this is the third Santa he has seen this year!! Ha! The mall Santa, the Santa in Redbud, and the Oakland House Santa! 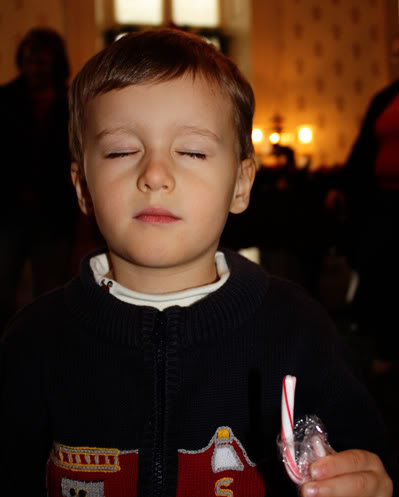 Another wonderful 3 year old trait of Nathan, everytime I ask him if I can take his picture, he purposely closes his eyes!!! Stinker! Nathan hates sticky or messy things, so see how I put the wrapper around the candy cane so his little fingers would not get sticky? 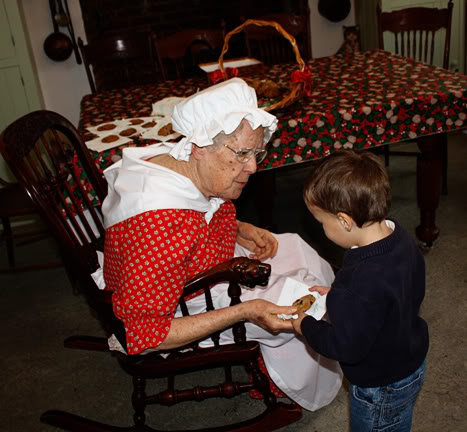 After Santa, we finally got to visit Mrs. Claus’s kitchen, and Nathan FINALLY and I mean FINALLY cheered up when she handed him a cookie. Ahhh, 3 year olds, they are so predictable, hand them some sugar and they are your bestfriend again! 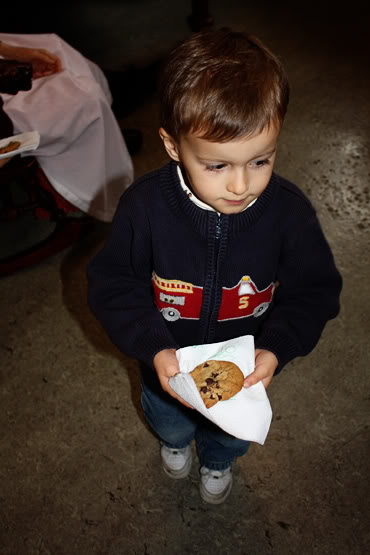 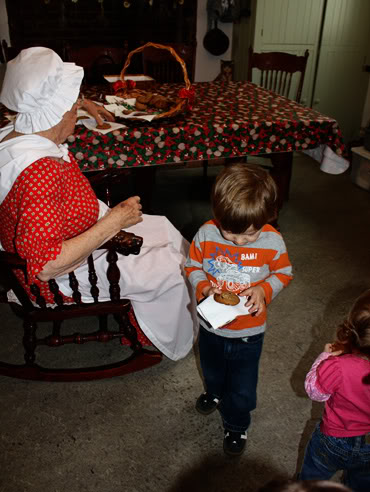 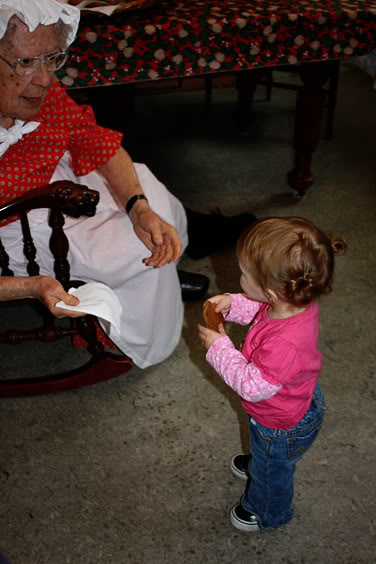 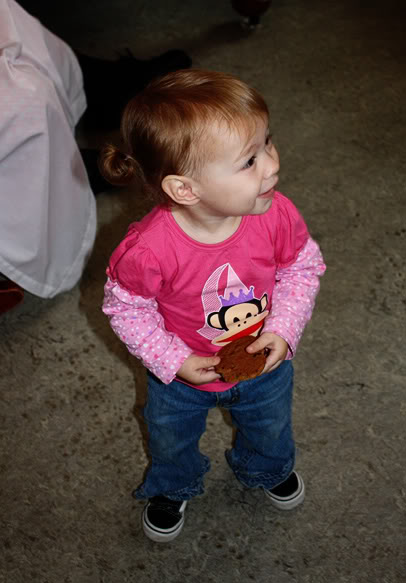 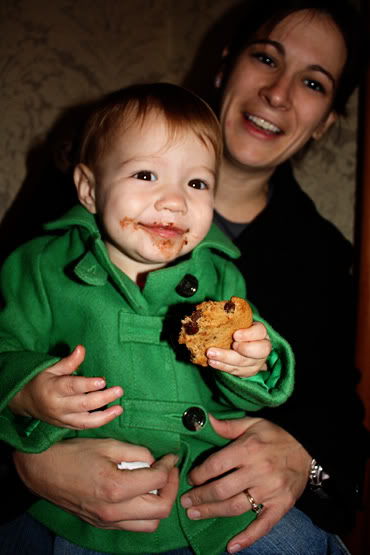 This is my friend Cammie and look at Bonnie’s chocolatey face! I am sure Autumn would have matched her if she would have come along with us. 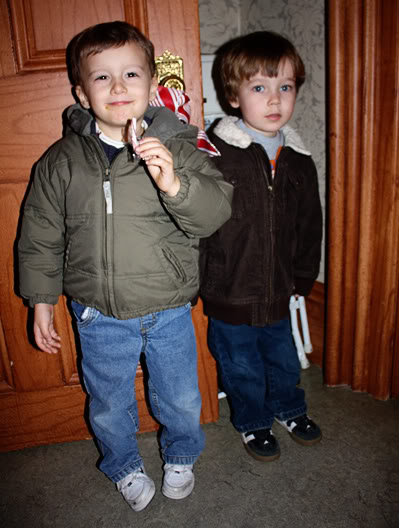 Nathan and Jacob, they both have May 2006 birthdays! Bonnie is just a few months older then Autumn… so neat that I work with someone that has children the same age as mine!