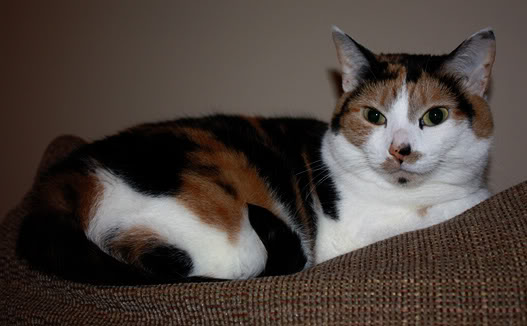 Let me introduce you to our only pet in the family, Bratches. She came to live with us shortly after Brat, my bestfriend-kitty passed away in April of 2006. I was heart broken because Brat’s death was sudden and he was only 9 years old. There is so much more to Brat’s story, but I will save that for another day. But, his loss was really hard on me as he was such a great cat and we had a wonderful bond. So, somehow I talked my husband into helping me find a new furry member for our household. Did I mention I was almost ready to give birth to Nathan? We found Bratches at PetsMart and the lady that sold her to us took one look at my belly and asked me if I knew what I was taking on. Hah! 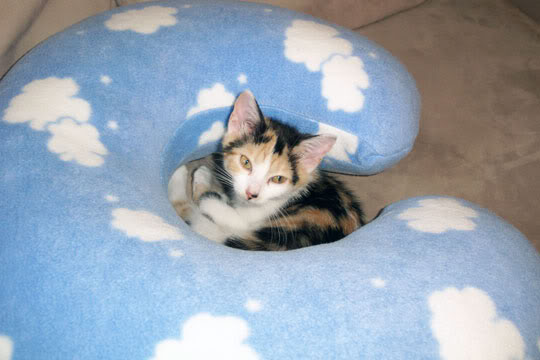 Let’s just say… I’ll admit. I was wrong. Perhaps getting a kitten 2 weeks before I gave birth was maybe not the best idea. I remember when I bought Bratchey, I thought to myself, oh this will be the best maternity leave ever, I will have plenty of time to bond with my new kitten and with Nathan. So, the 2 weeks prior to Nathan’s birth, I gave Bratchey soo much love and attention. She loved me and followed me around the house everywhere. She watched me as I got things ready for Nathan’s arrival… and, it did help ease the sadness of Brat’s loss… a little. But, its been almost 4 years and I still miss him! 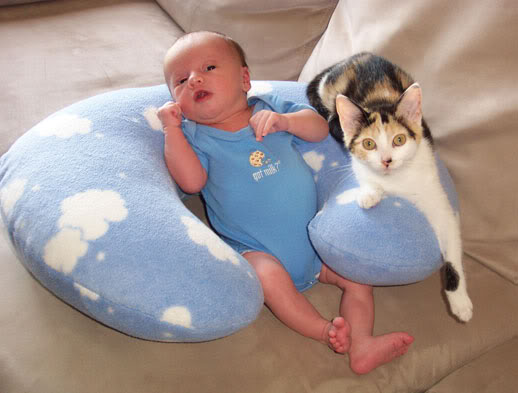 It was hard on Bratchey while I was away at the hospital for 3 nights after giving birth to Nathan, and when I arrived home from the hospital, baby Nathan scared her. It did not take her long to realize that Nathan was not leaving, and she was still Momma’s baby, too! 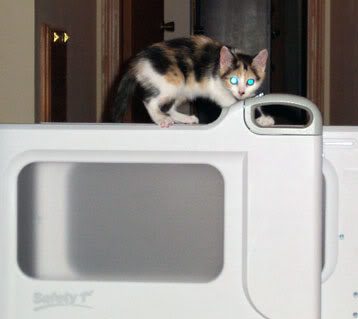 However, Bratchey was a kitten, and she would scare easily, or she would just want to play… and, it was quite a lot of work having a newborn AND a baby kitten in my household at the same time. 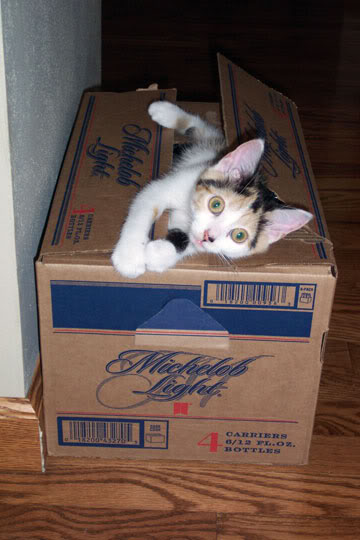 Ohhhh, if I hadn’t of been breastfeeding Nathan, I might have actually downed a couple of those beers. Ha, ha! I can actually remember when I took this picture, Nathan was asleep in the swing, and Bratchey was in this beer box just playing away, making ALL kinds of noise scratching her paws against the cardboard. And… it was enough noise to wake Mr. Nathan up from his nap! Ooops!! 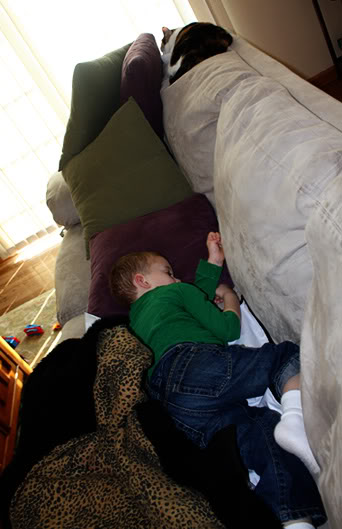 Yes, I will admit, it was a little rough at first… but, oh do my kids adore her! She is definitely a loved and cherished family member of our household! Autumn’s face lights up when she sees Bratchey! Its hard to believe that almost 4 years have passed since we’ve brought Bratchey home, and that her and Nathan are only a couple of months apart in age. 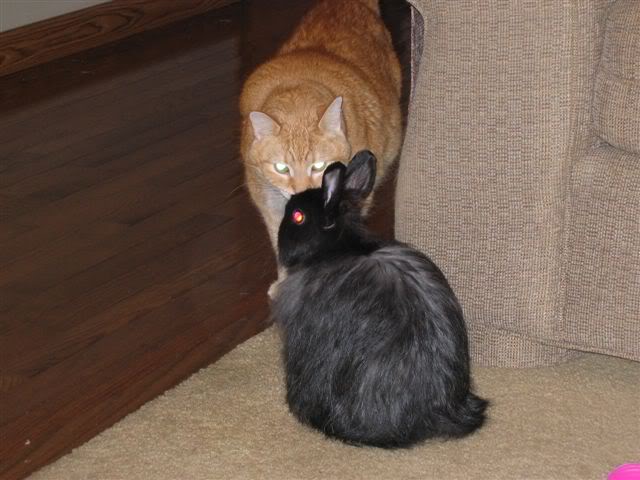 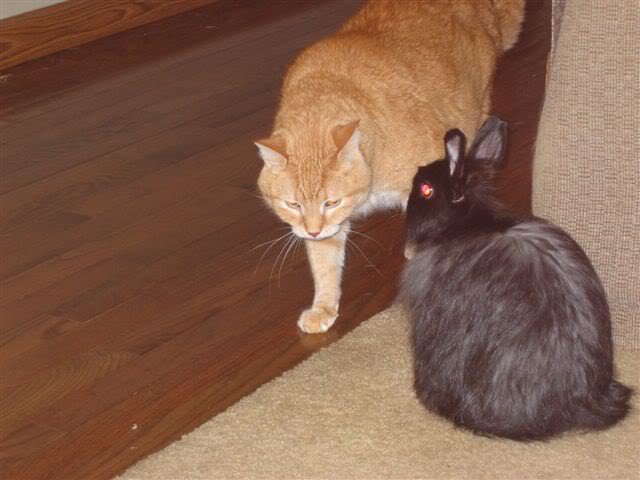 Here is Brat, with my bunny Hope. He was such a gentle cat, that I could trust him around my bunnies. And, they trusted him. All three of my bunnies were litter box trained, however, they were only allowed to roam in certain areas that were rabbit proofed… that did not stop Grace from biting through my keyboard cord TWICE (and it had a cord protector on it from Radio Shack! Their teeth are razor SHARP!). It was funny, because both times I was typing and all of a sudden my keyboard stopped working… the second time it happened, I KNEW!! Of course, I had to send Jeremi out to get a new keyboard and I rabbit proofed it so that the they could not even get behind my desk! They just loved to hide out behind there to nap! 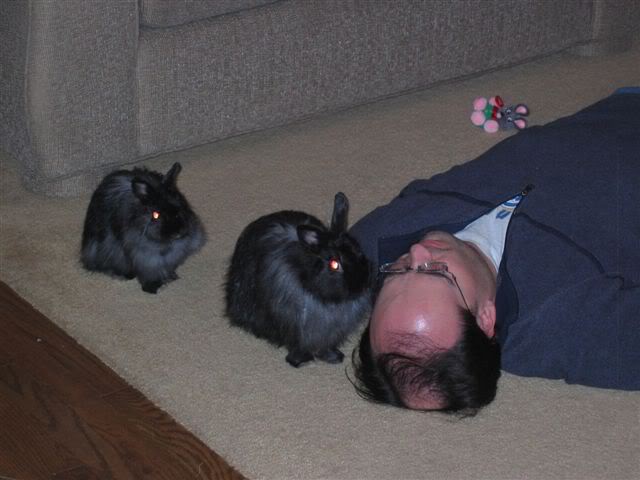 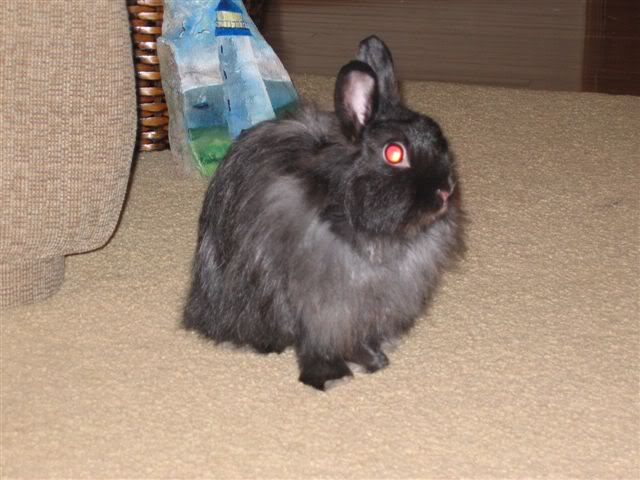 Here is another photo of Hope, isn’t she beautiful! 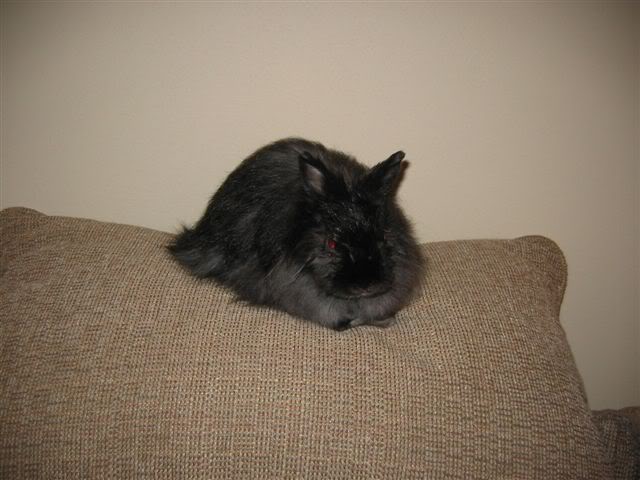 Here is Hope’s baby Missy (we knicknamed her Storm Cloud as she has a little attitude!). I adopted them both knowing they had ongoing health problems. Hope had a lot of teeth problems and abscesses, so she required shots every day, that my husband administered to her. Missy, her baby, had eye problems and was so tiny… she passed away on us only a few months after we brought her home, she was just so very sick. 🙁 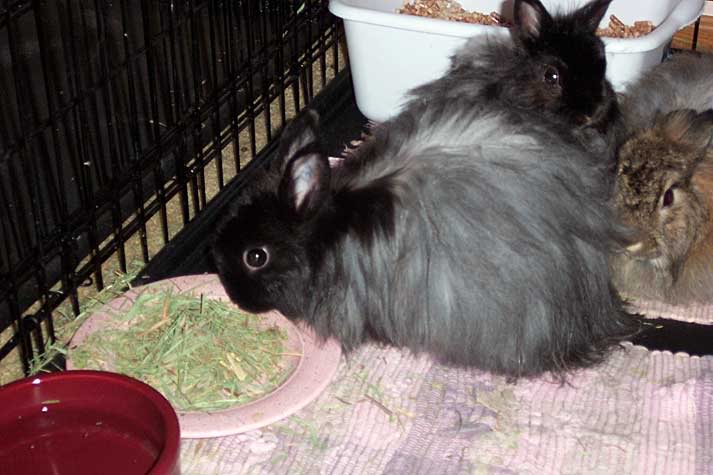 I also had a brown bunny named Grace. All three rabbits were bonded, even though we later brought Missy home and even though she was Hope’s baby, we had to rebond them. All three rabbits are jersey woolies, so I really had to do a lot of work with keeping their hair brushed. They would have a heavy shed twice a year and it was a lot of work to keep the undergrowth and tangles out of their hair. Missy required weekly vet visits due to her poor health (and she was the baby!). I got to know the vets at Everything Pets/Creve Coeur Animal Hospital reallllly well… luckily, the HRS paid for all of the vet bills since I was fostering Hope and Missy, however Grace was our ‘own’ so we paid for her visits. It was a lot of work, and unfortunately, before Autumn was born, I decided to give Grace and Hope back to the House Rabbit Society where I adopted them with a donation. Luckily, they went home with a foster mom that I knew really well through the organization because I was doing some probono work on a website for them. Rabbits are A LOT of work, and when you have small children it is extremely difficult to find the constant time to care for them. Also, Hope had so many teeth problems and anytime she would get an abcess, she would stop eating and I would have to force feed her, which is really time consuming (an hour each meal!) and I just felt like with bringing a baby home it’d be too hard to properly care for her. They need fresh veggies, special hay that I had to mail order, constant cage cleanings, exercise outside the cages, etc. It was draining me, and it was a decision I made that still makes me sad, but at least they went somewhere good and I knew that their care there would be better then what I could give them with working and taking care of Nathan and a newborn. Sometimes I really want to call to see how Hope and Grace are doing, but I wonder if I deserve to know since I turned them back in. 🙁 I still think about them a lot and I hope they are doing well… they were such great little friends!