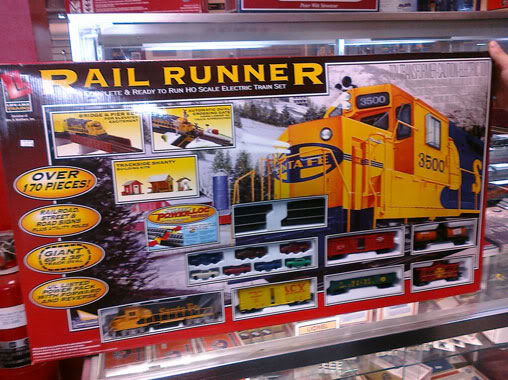 Nathan has been asking for an electric train for Christmas from Santa. He has been really into Thomas the Train for a long time now, and is still playing a lot with the trackmaster trains and tracks. I had a day off of work so I took Nathan to a couple of train stores here in town and let him look at different starter kits. They even had Thomas the Train starter kits! But, Nathan was firm on his decision that he wanted a train that looked REAL. :o)- He fell in love with this setup which includes seven cars that fit on the track as well. I went back later and got this set so he would think it came from Santa!

Now, I am starting to figure out what sort of layout I want for Nathan’s electric train table. I used this special software called Allrail, that lets you develop a track for free if its under 50 pieces. It tells you how many pieces you need and at what shape, etc.

The train set I bought is an HO scale, so I will need some more tracks so that I can make two loops for the train since the starter set only came with enough to do the larger outer loop (which would be quite boring for Mr. Nathan if it was only one loop!).

There will be a small mountain, a lake with a sailboat and possibly a small stream complete with waterfall. I’m planning to have a hilly forest on the left side of the layout with plenty of room for buildings in the middle.

The total size is 4′ x 8′, so I am hoping to get a sheet of plywood this weekend so I can start pulling everything together.

Nathan also really wants a locomotive that has smoke that comes out of it, so I think I found one for a reasonable price on Amazon. He will LOVE that. I plan to start pricing track and scenery soon. I want to make the mountains out of paper mache to save some money and I think they will turn out really nice. Hopefully Nathan will love the setup once I get it complete!