After weeks and weeks of training, I did it! I finished Disney’s Wine & Dine Half Marathon, with a PR!!! of 5 minutes! I was really proud of myself. I felt GREAT during this race, I really did not feel too exhausted until the last 3 miles, and those last 3 miles are ALWAYS exhausting.

I tried a new product instead of the GU, I ate an entire packet of Jelly Belly’s sports beans before the race, then ate 1-2 jelly beans per mile until they gave us a GU (gel) near the end of the race… at that point I was TIRED of the jelly beans, and the vanilla gel was something quicker and a little tastier at that point (even though I switched to jelly beans because I was tired of the GU! lol!).

There was SO much to see on the race, and we went inside THREE of the theme parks (Animal Kingdom, Hollywood Studios AND Epcot)… when we weren’t in a theme park, and were on the road, they had lots of Disney Characters to do photos and autographs with (I didn’t stop due to wanting to PR, but a lot of people did!). I would say my FAVORITE part of the race was running through Hollywood Studios and seeing the dancing lights on the buildings, I had never seen so many lights EVER. It was just an amazing sight to run past.

I would love to do another Disney race someday, especially the Wine & Dine or even the Princess race. I am so excited I was able to have this experience, to travel all the way to Orlando from St. Louis… it really did bring tears to my eyes! Definitely one of the top 10 best experiences in my life!

Here are my stats:

And lots and lots of photos: 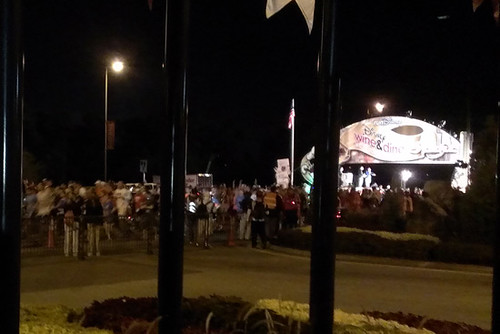 Disney threw an AMAZING before party. Lots of dancing, group dancing… and EXCITED runners! It really helped get me pumped up! I needed it, because I took a nap before the race! LOL! They had the corral area blocked off for JUST runners, so Brian waited near the shuttle stop (to get back to Epcot, since the race started at ESPN) to see me off… he never saw me, though, because there were thousands of runners!! There were 6 corrals of runners (A-F) based on your speed, and I was in corral C. 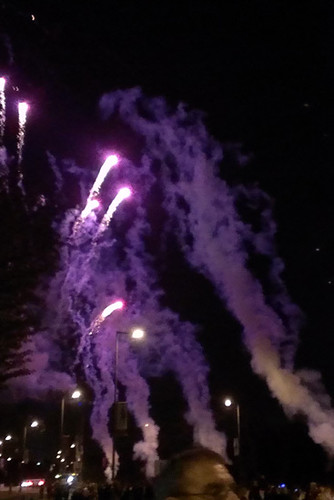 It was so neat to see corral A and then corral B start, because they shot off fireworks at the start of each corral. Then when it was our turn, I was super excited (and nervous), and wondered what I had signed myself up for… 🙂 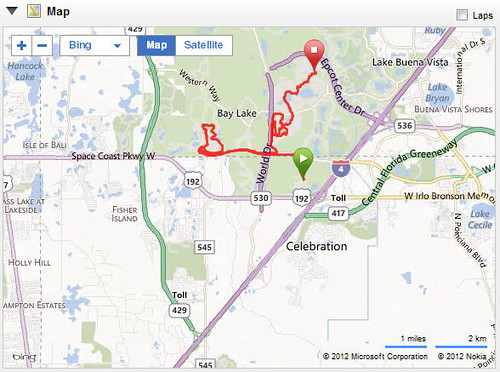 Here is the map from my Garmin. I ran this 🙂 Yeahh! You really DO not realize how far you have ran, until you see it on a map. 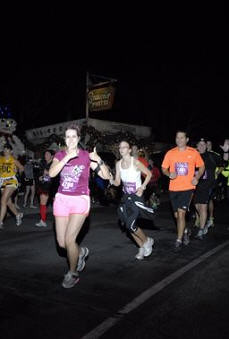 Now, some running photos straight from the camera crew on the race track! Ha, ha! I saw this photographer, and I gave him two thumbs up! 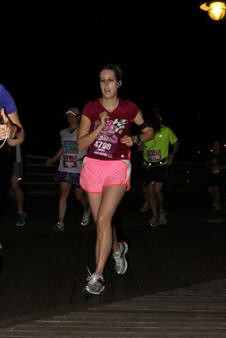 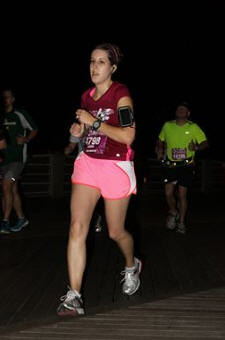 These two that they took are kind of similar, there I am… running in the dark! This was the first time I’ve ran in the dark ever… they did keep the runway lit so it wasn’t pitch black by any means. 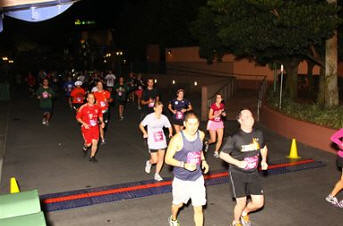 Brian got the text alerts, and every time I would run over one of these I would wonder if he just got texted my current mile and time! LOL! 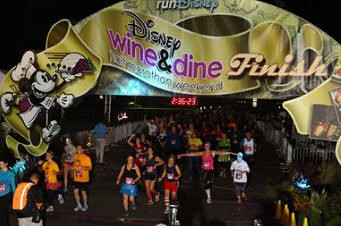 In this Finish Line photo, I am sort of center-left with one arm up in victory. I have a pink shirt one (and pink shorts). 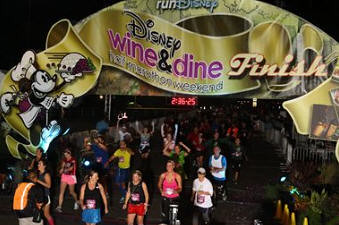 In this Finish Line photo, I am lower left… pink shirt/shorts and looking down at my Garmin on my wrist. 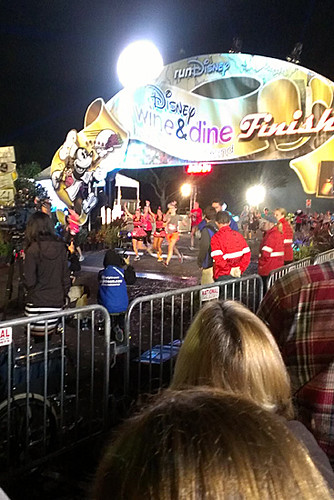 Brian’s photo of the Finish Line, but I am not in it. He missed me! Boooo! 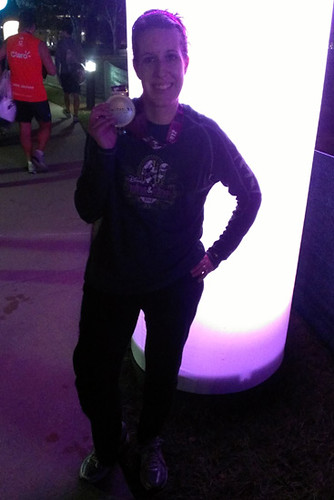 After I finished the race, I went in the most sweatiest and yucko tent they had set up for everyone to change. My race clothes were DRENCHED in sweat, which would be miserable to wear for the Wine & Dine after party… so, I changed. Here is a photo of me with my race BLING after I changed. 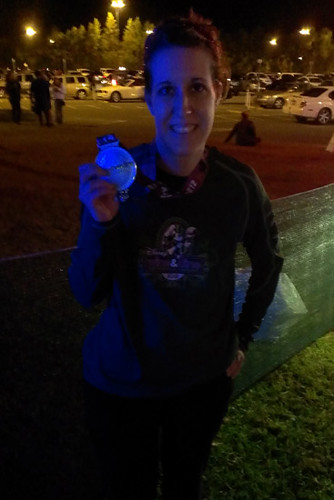 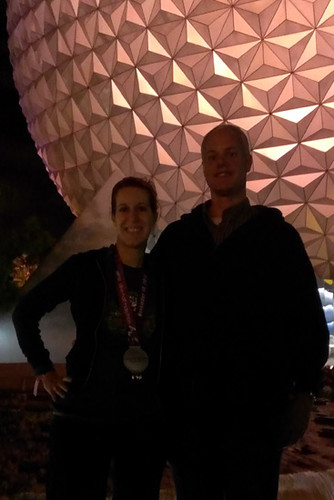 Me and my BriBri, getting ready to enjoy the AFTER party! We actually rode the Spaceship Earth ride first, because it gave me an opportunity to SIT. 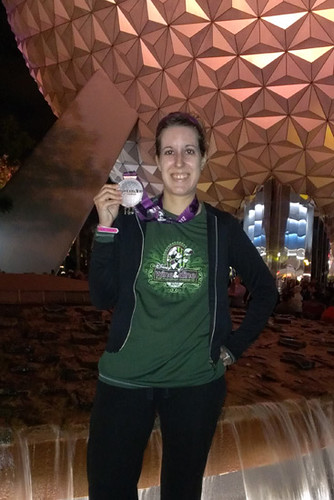 I look a little sore in this photo… I WAS. I am wearing the race shirt that they gave us in our race packet in this photo. Not a bad shirt, except it had long sleeves. Good for the party, not good for racing. 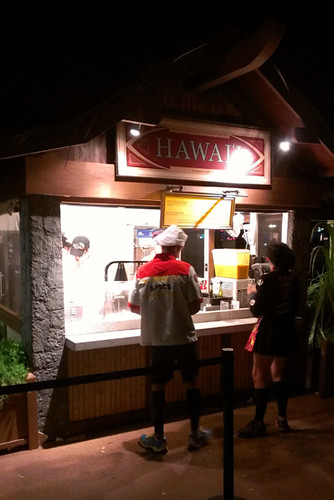 The Wine & Dine After party included a pass into Epcot AFTER HOURS to enjoy their Wine and Food Festival. They had 32 different food stations set up, each one was a different country. Here is Hawaii’s (even though we did not eat at Hawaii)… 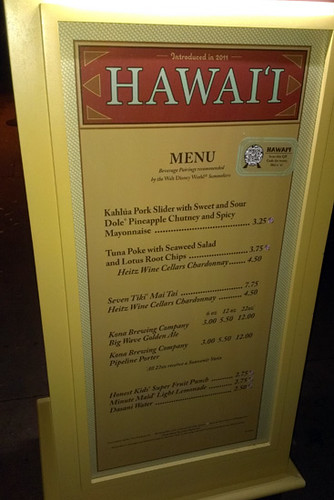 Hawaii’s menu. Each food station had a menu. It included small portions of meals, desserts and drinks. 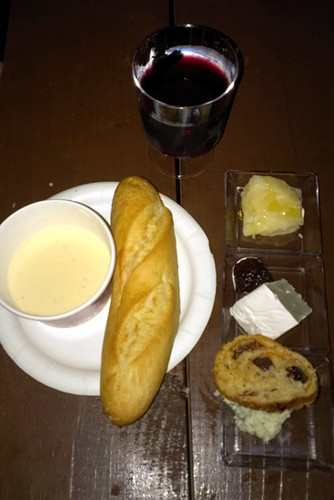 They did have one station that was not a country, it was just CHEESE. Uh, heck yeah! We tried the Cheese Fondue with Sourdough Bread, a Trio of Artisan Cheeses (Beecher’s Flagship Reserve Cheddar, La Bonne Vie Goat Brie, Rogue River Creamery Echo Mountain Blue Cheese) and a glass of Sterling Pinot Noir . 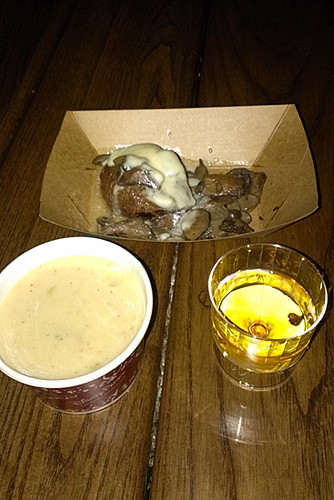 At Canada, we tried the Canadian Cheddar Cheese Soup and the “Le Cellier” Wild Mushroom Beef Filet Mignon with Truffle Butter Sauce. We also enjoyed the refreshing Neige Premiere Apple Ice Wine. I wish I had taken photos of the other food and drinks we got, but I forgot my GOOD camera at home and I was just really tired after the race. 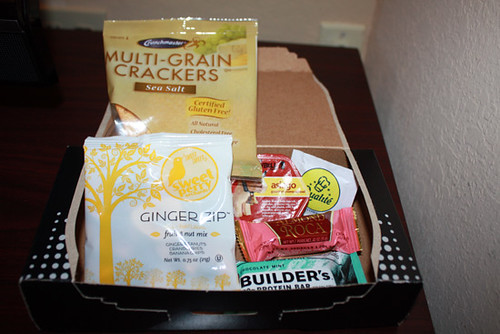 After the race, they gave me a box with goodies in it. I did not even open it until I got back to the hotel. There was quite some delicious and yummy snacks in it.

So, now you may be wondering what is next? I have a Santa 5K in Historic St. Charles next month! I am currently working on my speed and shorter distances. It will be nice to take a break from the longer runs for awhile, it really does take a lot of devotion and time. My ideal dream is to run a half marathon in 2:15 someday. I wish the race hadn’t been so congested the first mile to where we were almost walking/jogging, I think I could have gotten my time down even more. But, I am still not complaining about a new PR!