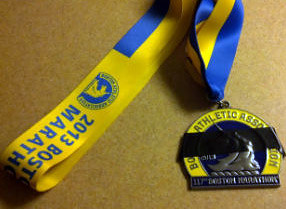 It is hard for me to talk about the Boston Marathon Bombings, every time I think about it an array of emotions goes through me… anger, sadness and yes, fear… It was an attack on not just Boston, but everyone… runners come from around the globe for this race. Being a runner myself, I understand how the dream of running in the Boston Marathon quickly turned into a nightmare for those in it. The Boston marathon is the most cherished run, the run of all runs… I have only trained for three half marathons, never a full, but training is a lot of work! They put in MONTHS of long runs for their training, runs that took time away from their families or where they made sacrifices in other parts of their lives so that they could prepare for this difficult yet rewarding race in Boston. All for it to be ruined by some angry individual(s) that decided it’d be fun to add some bombs to the finish line. I am so incredibly thankful that the bombs did not go off when the first wave of runners finished, hundreds could have been injured and killed. Yet, I am so saddened by the ones that were hurt and killed, especially the 8 year old boy that hugged his father after he finished the marathon.

Why would someone do this? Well, for one… it doesn’t surprise me that they picked the Boston marathon. I mean, why not go for the best? I feel that this horrible act happened, because of anger, jealousy and hate. And, of course, they wanted to invoke fear and sadness in what should have been a time of joy. There is always going to be anger, jealousy and hate in our world, but what can we do to stop it? We can be supportive of others dreams and goals… we can make our own dreams and goals to be proud of… After the bombings in Boston happened, it reminded me of something someone I know said to me. This particular person had told me that she hated runners, she thinks they think they are better than everyone else. She went on to say they love to brag on Facebook and that is all she sees in her Facebook feed is all these runners bragging about how fast or far they can run, etc. I was a little shocked she said this to me when she knows I am a runner. But, I brushed it off and thought haters gonna hate, right? But, maybe there is more to this… maybe something is wrong if someone has to feel this way about someones accomplishments or dreams. I know running is sort of a trend right now and a lot of people are running, but so what? Shouldn’t exercise and trying to set goals for ourselves be something good?

I heard after the bombings from a few people, “Oh, you could really get hurt doing these runs.” That is fear talking and this is what the bomber wants us to be left with, fear. I will admit, I am sure as I am crossing the finish line at my next big race I will think about the Boston marathon bombings. I am sure a lot of runners will. But, what I won’t let it stop me from doing is running in these races. I have a dream of running in the Chicago marathon after I get a few more half marathons crossed off. We can’t let someone elses anger and hate stop us from doing what we enjoy. If anything, it should make us want to run even more.

I am thankful for those that helped at the aftermath of the bombing. That is something to be thankful for… there truly are some good people in this world, way more than the bad ones. I could go on, but I am going to end this with something I received in an email from Fleet Feet (a running store and running group) this morning. It really sums up how I feel.

For Boston
by Amy L. Marxkors

The spirit of the runner cannot be broken.

It is a spirit of strength. Of faith. Of community. Of resilience. Of justice. Of freedom. It knows no barriers of language or ethnicity or gender. It knows not nationality or politics or age. It is not limited to those who run, but extends to their husbands and wives, mothers and fathers, sisters and brothers, children and friends. It reaches to complete strangers calling out words of encouragement and volunteers holding precious cups of water. It is a spirit of unity and support. It is a spirit that speaks not with words, but with actions.

The attacks at the Boston Marathon violated more than a race. The time and place were chosen to be as offensive as possible, to be a visible and flagrant affront to that which binds humanity as one. They were directed not just at the runners themselves, but at those we love—those who ride with us the daily ups and downs of training, who listen while we rattle off mile splits, who rejoice in our PRs, who commiserate when we fall short, who remind us to get off our feet the day before the race, who map out intricate race-day navigation plans to catch us at mile four. And ten. And sixteen. And twenty. Those who hold signs and ring cowbells. Those who cheer us on. Those who make it possible for us to reach the start line. Those who do so quietly, without asking for praise or acknowledgment.

Those who wait for us at the finish.

The attacks were calculated to ridicule freedom by victimizing the strong and murdering the innocent. They were intended to fell a community. They were designed to make a mockery of the human spirit.

But far from achieving their aim, the attacks in Boston merely revealed terror’s own cowardice and futility. Even as it sought notoriety and fame, hate exposed its own impotence. In its presumption, fear paid the price of trampling sacred ground.

Because even as the last reverberations from the explosion rumbled through the streets, those who were able rushed to the aid of the fallen. Even as the smoke rose from the wreckage, those who were strong carried the injured to safety. Even as the attacks were planned to create an environment of fear, division, and helplessness, it drove those very things away. Even as it sought to divide, it solidified our oneness, for in that moment there was neither runner nor spectator, neither friend nor stranger, neither elite nor volunteer. In that moment, we were one.

Far from crippling the human spirit, the attacks in Boston galvanized its strength.

We grieve the suffering of those injured and the loss of those who died. We feel the sorrow and pain of those affected. But we will not be broken and we will not surrender, for we are the caretakers of their memory. We are the ambassadors of their strength.

For those who conspire to destroy will fail, their plans will come to ruin, their names will fade away and be remembered no more. But we will not lose heart. We will not surrender.

For the spirit of the Boston Marathon is the human spirit, and it will never, ever be broken.

To Boston, with love.