I hope you had a wonderful Christmas!! We put the kids to bed and they fell asleep rather quickly, I think they were exhausted from opening all of the gifts! We still have one Christmas gathering tomorrow, so I am going to do a recap of our Christmas after that so I can do it all in one big post. PLUS, I still haven’t done a post on Nathan’s class party. 🙂 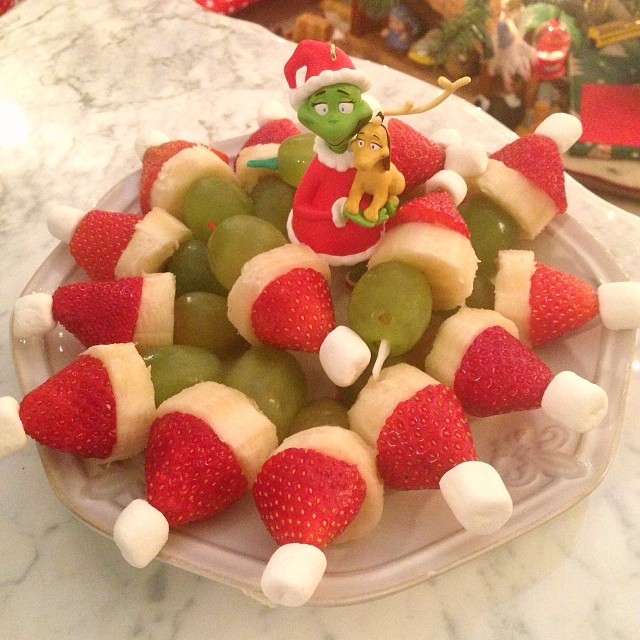 For Nathan’s class party, I wanted to make these GRINCH treats that are all over Pinterest. I had everything bought to make them, but I didn’t have enough time to make them up fresh before the party due to work (argh!). So, I actually made them today for our Christmas brunch and the kids loved them! I even found a Grinch ornament from off the tree and put it on the middle of the plate. Aren’t they cute? The grape is supposed to be the Grinch’s head and then the banana, strawberry and mini marshmallow are the Santa hat on top of Grinch’s head. 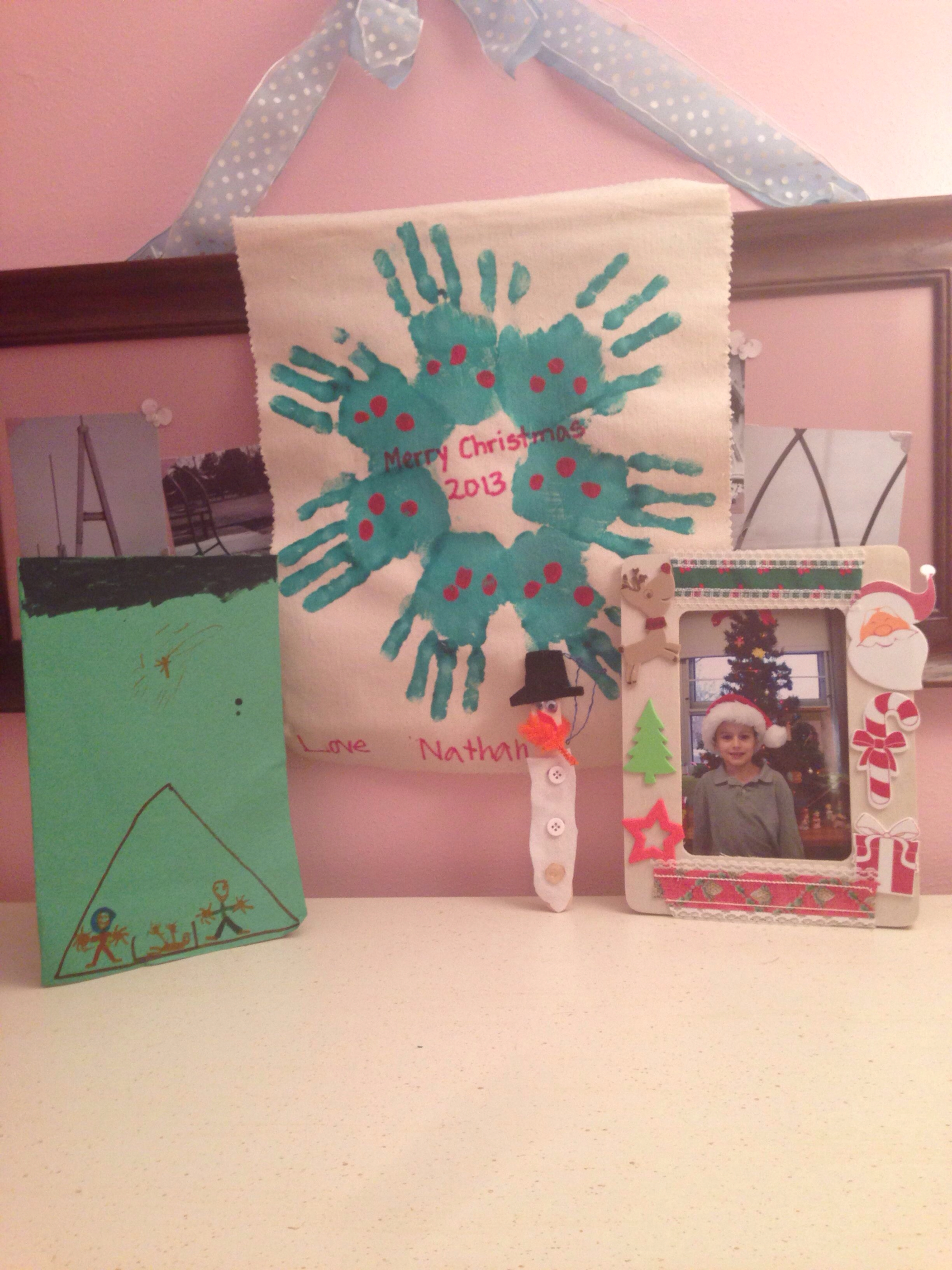 Before I get into the party, Nathan’s teacher wrapped up some gifts from Nathan to me and sent them home. He made me a card, a photo frame, a hand print wreath and a snowman ornament! Oh, I just love homemade crafts! My Mom actually saw Nathan (while she was picking up Autumn) in the hallway with a ‘green’ hand last week and was wondering what craft project he was up to! 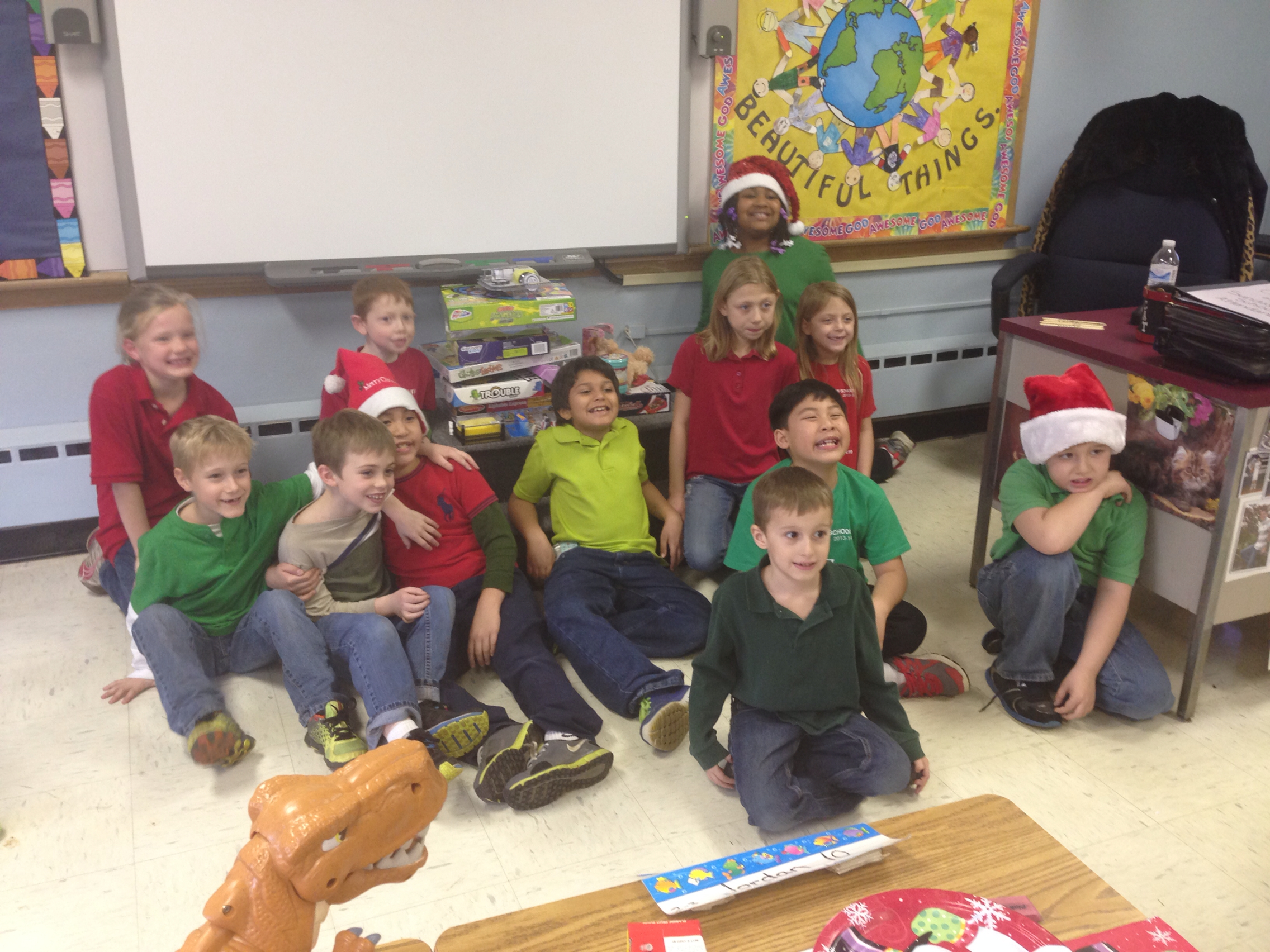 I was in charge of Nathan’s class party this time, because the Mom that usually does it couldn’t since she had to work. It was kind of fun working with his teacher to plan the party, she wanted the kids to bring in a $5 gift for Toys for Toys instead of Christmas gifts for each other. Here is Nathan and his class next to the gifts the brought in for Toys for Tots. 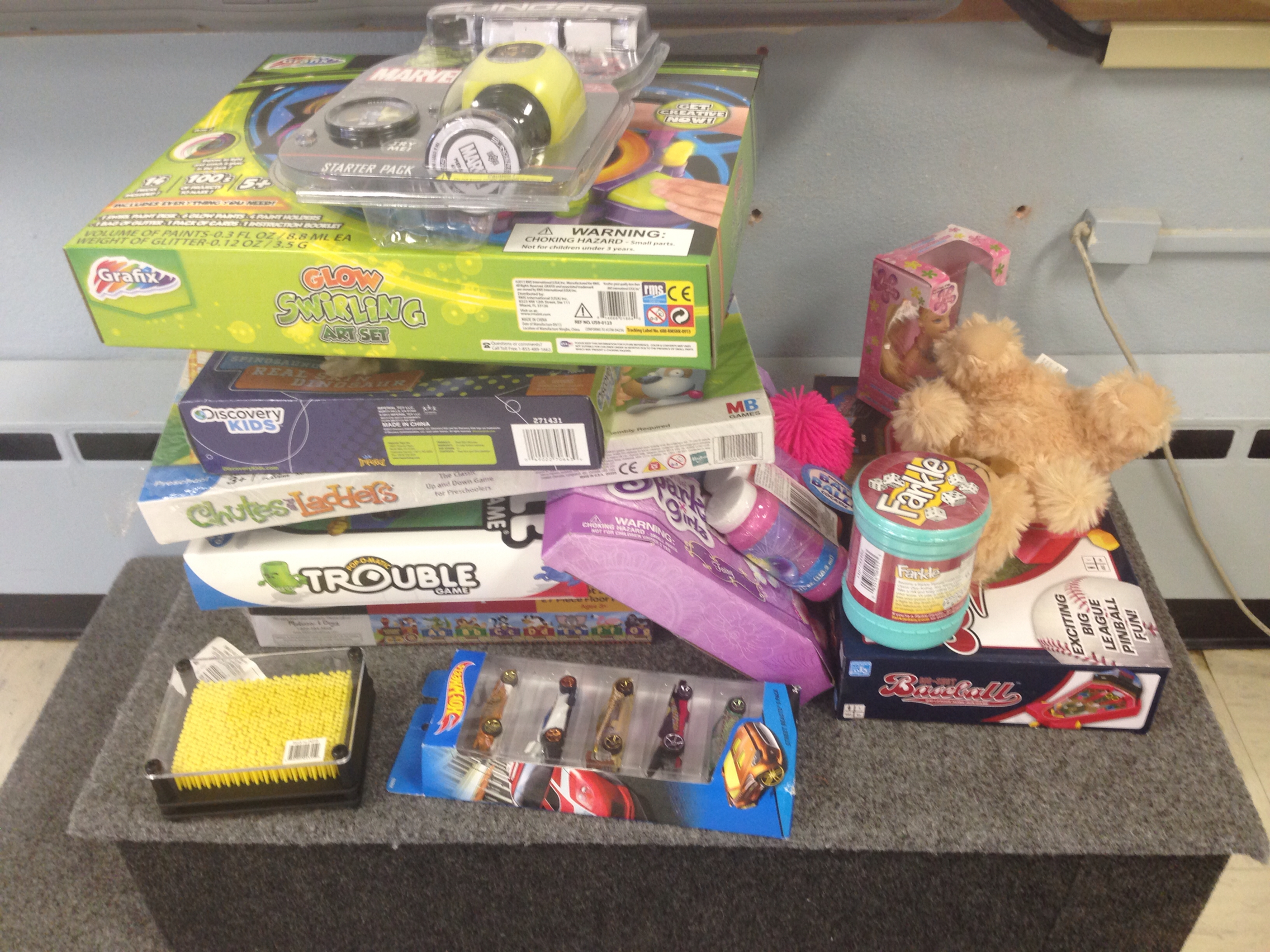 Here is a closer look of the toys they brought in for Toys for Tots. 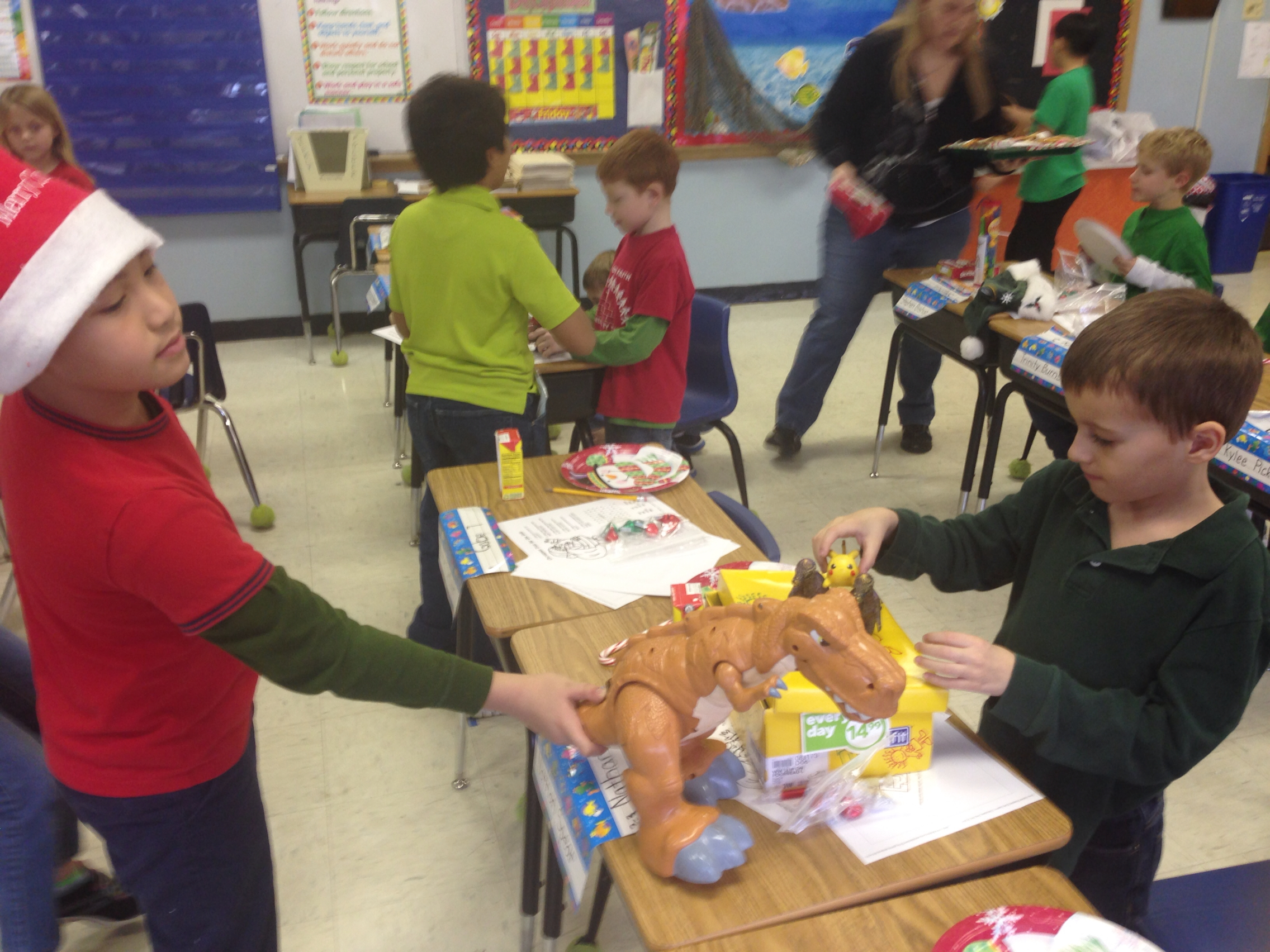 Then, I had the idea of doing a White Elephant gift exchange with the kids, for fun. None of these kids had ever done a White Elephant gift exchange before, so it was really fun to show them what it was all about. I even found a ‘nativity’ story online instead of the regular White Elephant story. We had the boys bring in gifts for boys, girls gifts for girls and then we had the boys go first while the girls played a different game. The nativity story goes on about the birth of Jesus and I had the boys sit in a circle and they would pass the gifts left or right, whenever I said those words. Then at the end I drew names and if I drew their name they could steal a gift from someone. It was a lot of fun! Then they opened the gifts and everyone loved their old yet new to them toys! This is a picture of Nathan playing with his new toys, a couple of dinosaurs and a pokemon figure 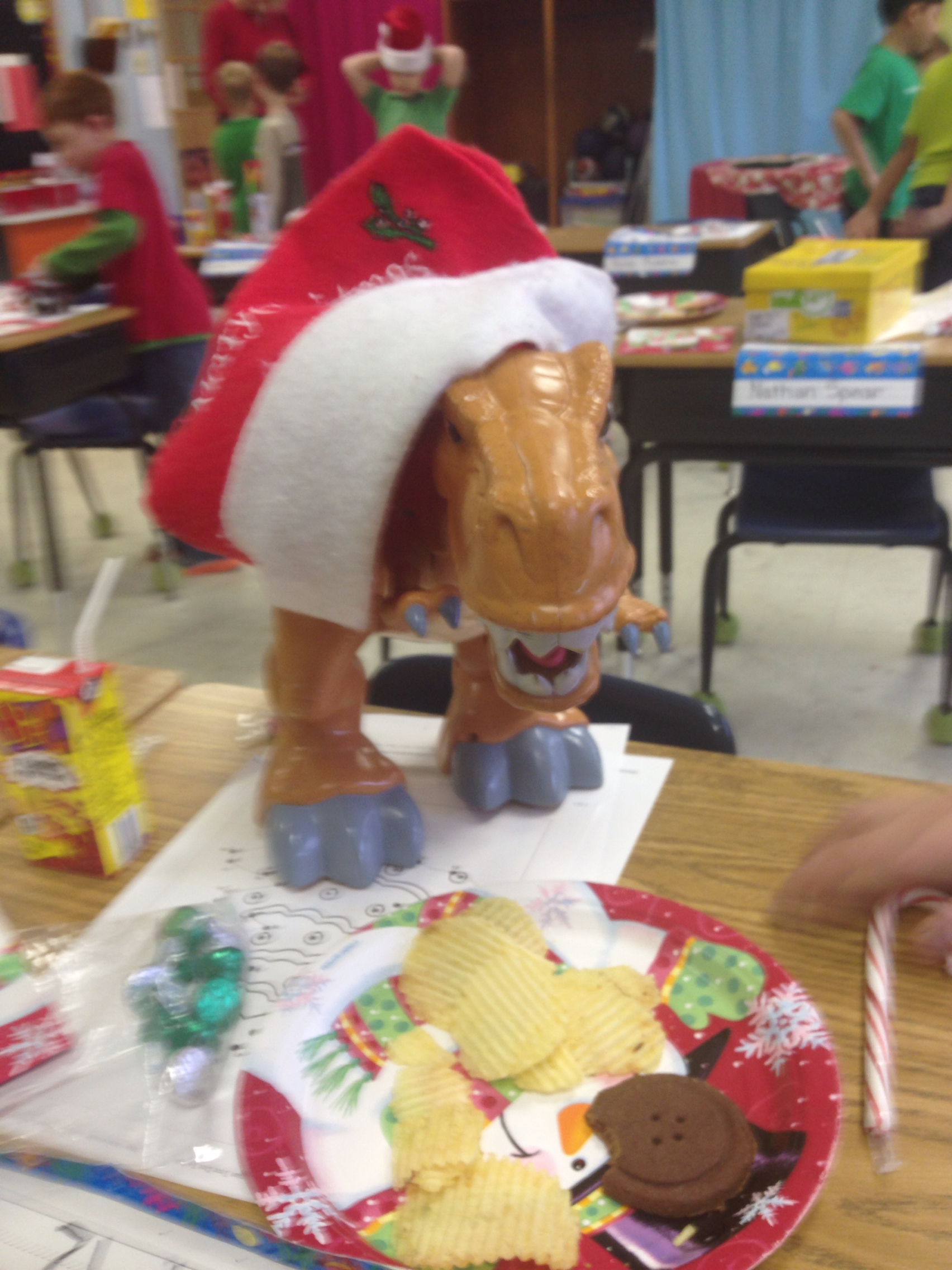 One of the boys got this huge battery operated dinosaur. It was quite a hit at the party. One of the girls got a kiddie digital camera, it was amazing what some of the kids brought in for White Elephant gifts! 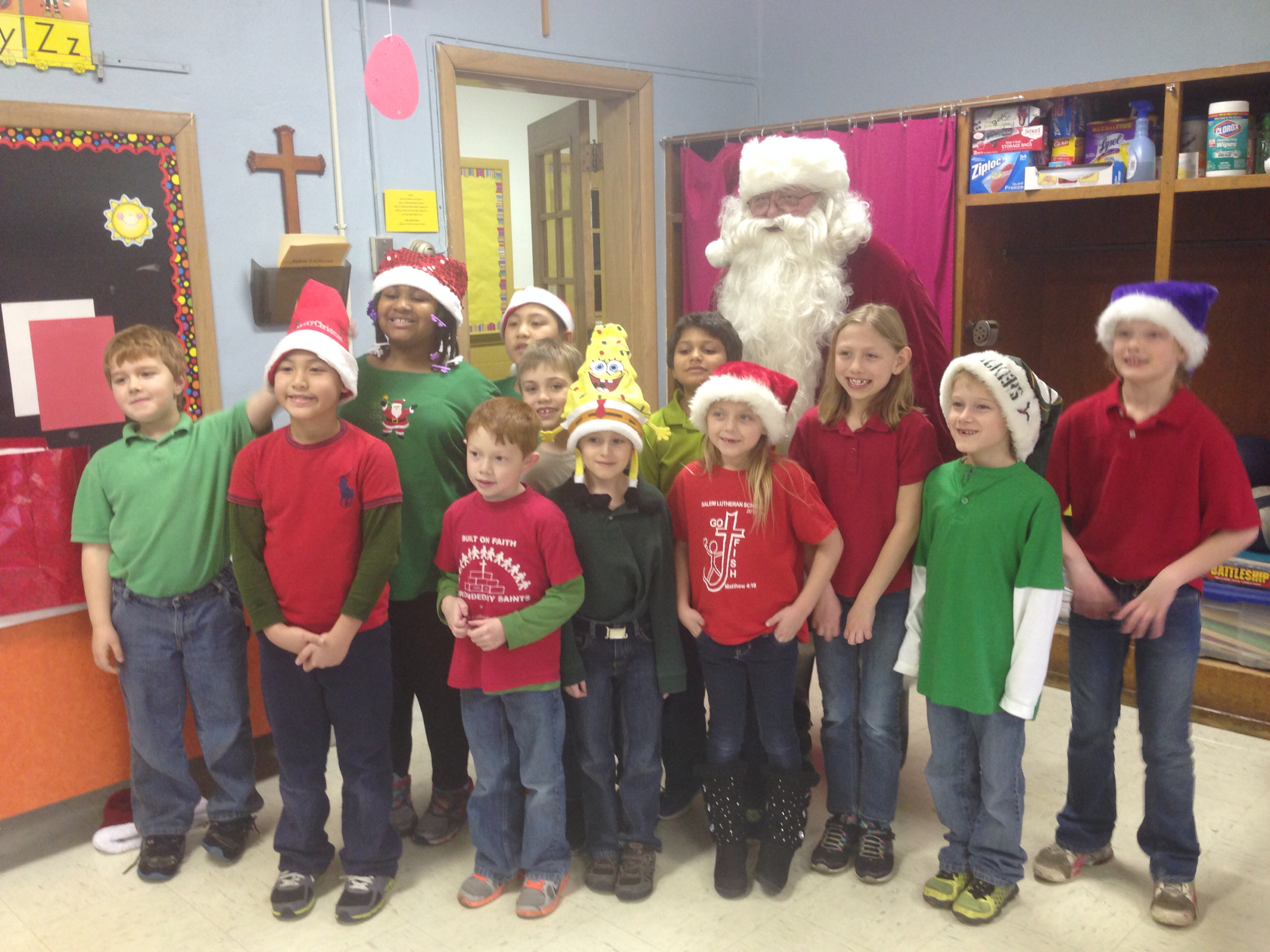 Then, the kids also got to see Santa during the party! There is a Grandpa up at school and he does SO much for the kids. Nathan is wearing his Spongebob santa hat, the kids didn’t need to wear their uniform clothes, they were able to wear jeans, red/green and Santa hats! What fun!

I hope you had a wonderful Christmas! Thanks for stopping by!