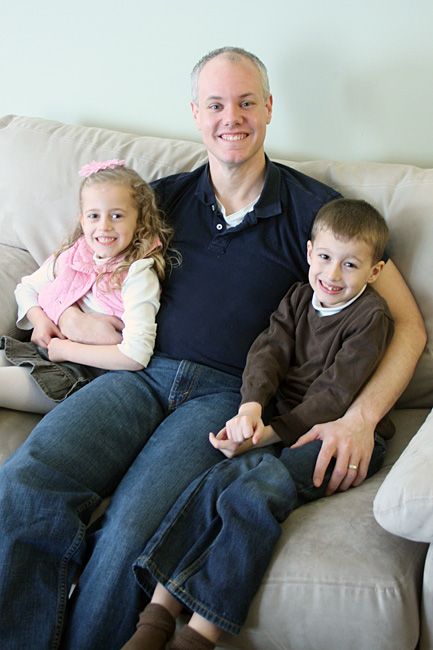 Brian had a birthday last Sunday and of course a birthday around here is a full day of celebration!  Here is an adorable photo of Brian with the kids. I lucked out on this one (on Brian! But, having everyone smiling in the photo was luck, too!). 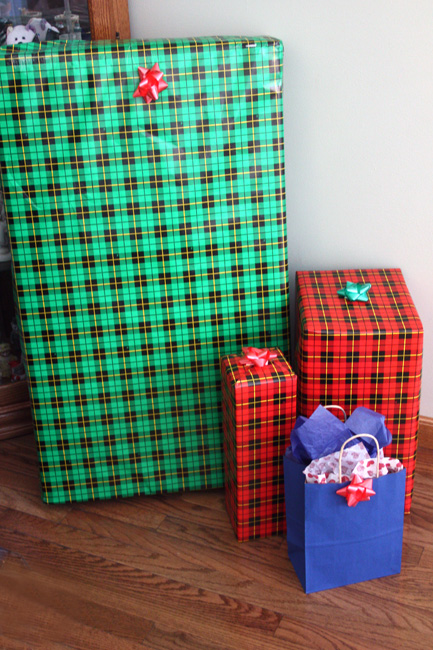 So, what happens when there is 12″ of snow and you’re not at work for two days? You get shtuff done. I got all of Brian’s presents wrapped, including that massive one that was SUPER heavy and awkward to wrap. Its a dumbbell rack. 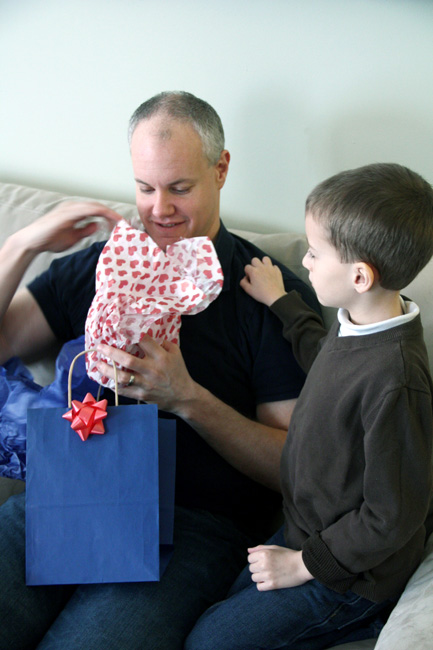 It is amazing how interested the kids are in gifts. Period. Even if they are grown up gifts. 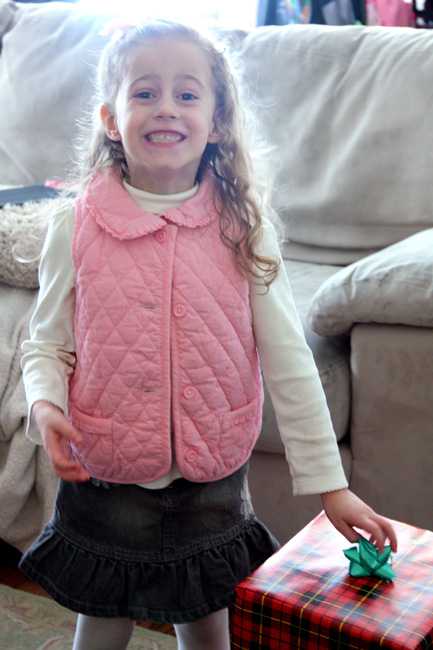 CHEEEEESE! Isn’t her quilted vest adorbs? Getting a second year of wear out of it! Last year it was a little big on her… It is a size 4/5. 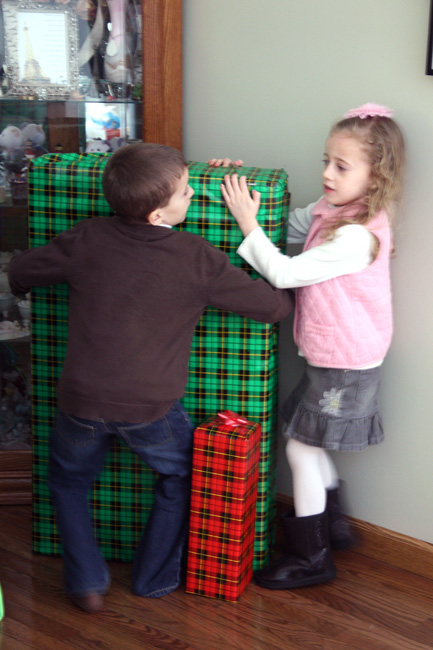 The kids trying to scooch Brian’s massive dumbbell rack over to him. They needed a little help. 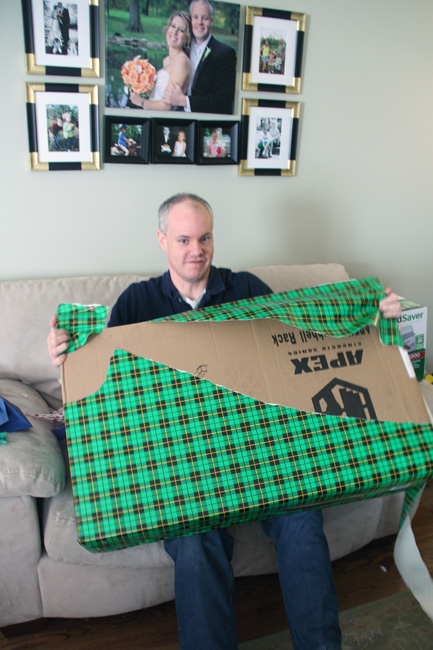 Brian is strong… he picked up this dumbbell holder and ripped it open. Muscllleee mannn! Ok, sorry… I’m drinking a glass of wine while I am writing this and the sillies are taking over. 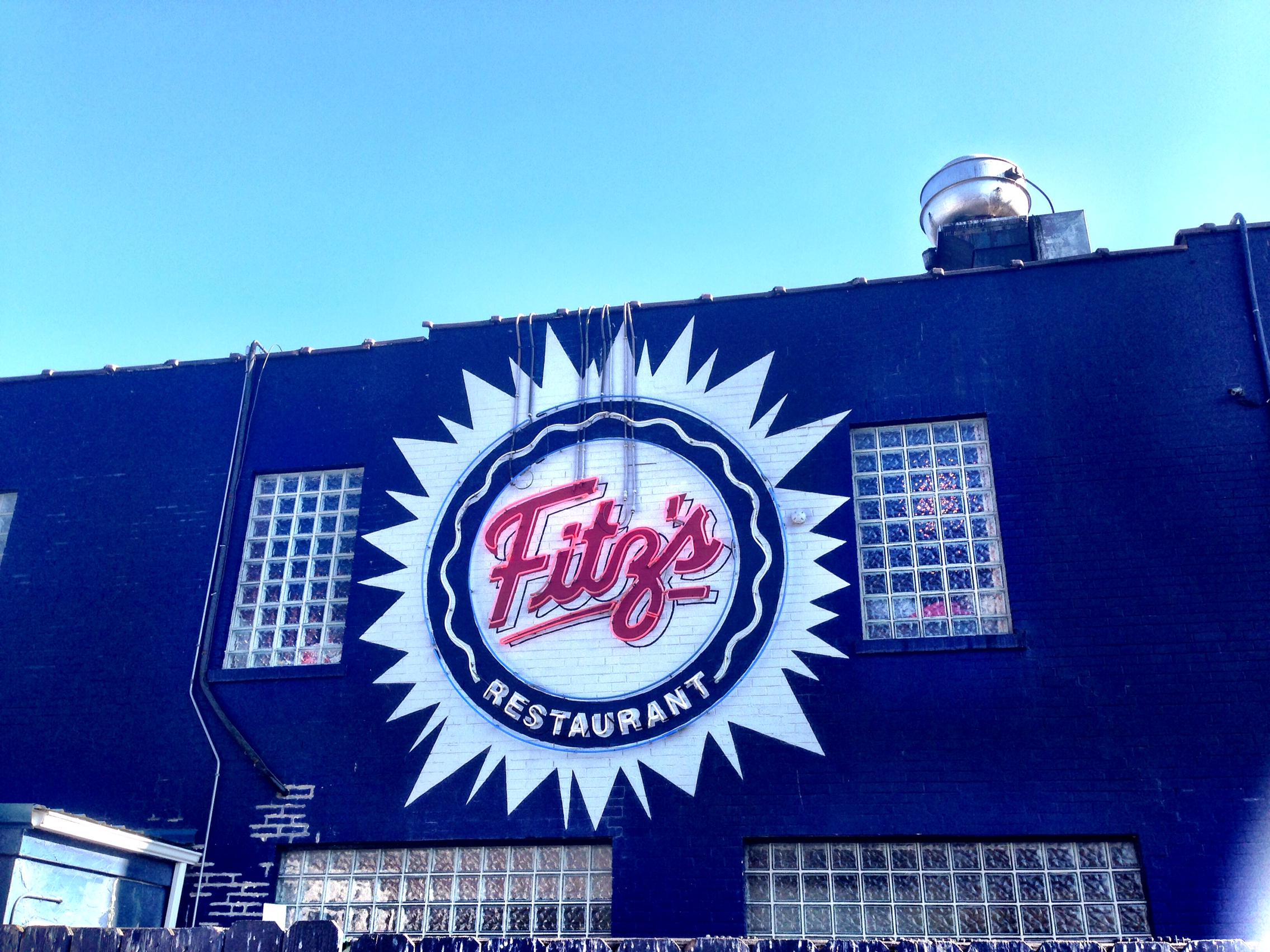 SO, I decided on where we would go to lunch at… I love cream soda and I drink Fitz’s, IBC and even A&W… well, Fitz’s is in St. Louis and they have the bottling works and restaurant right in St. Louis… NONE of us had ever been to lunch there. I know! Well, I wanted to do a tour of the bottling plant, but they weren’t offering it this weekend. Boo. But, we did enjoy a smashing lunch! 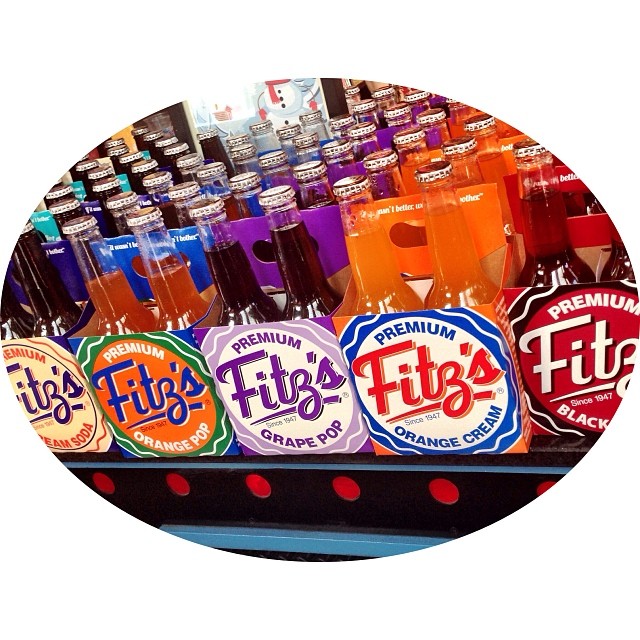 I had NO idea Fitz’s made this many different kinds of soda. 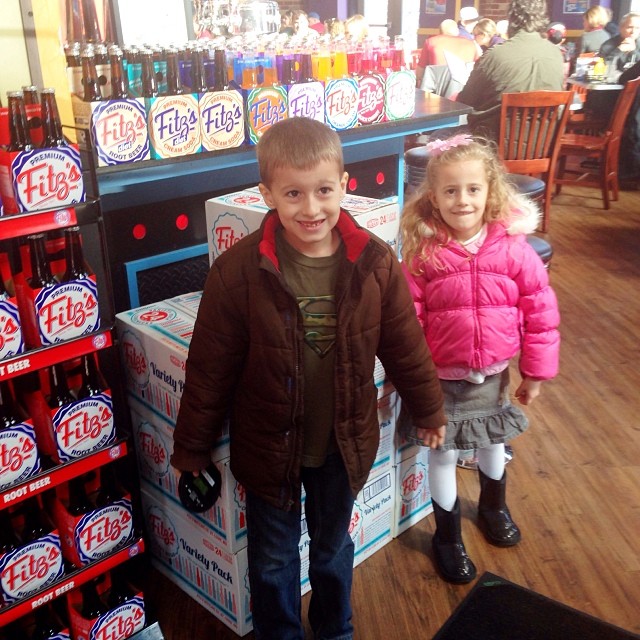 The kids were SO excited to eat here (don’t worry, so was Brian!). 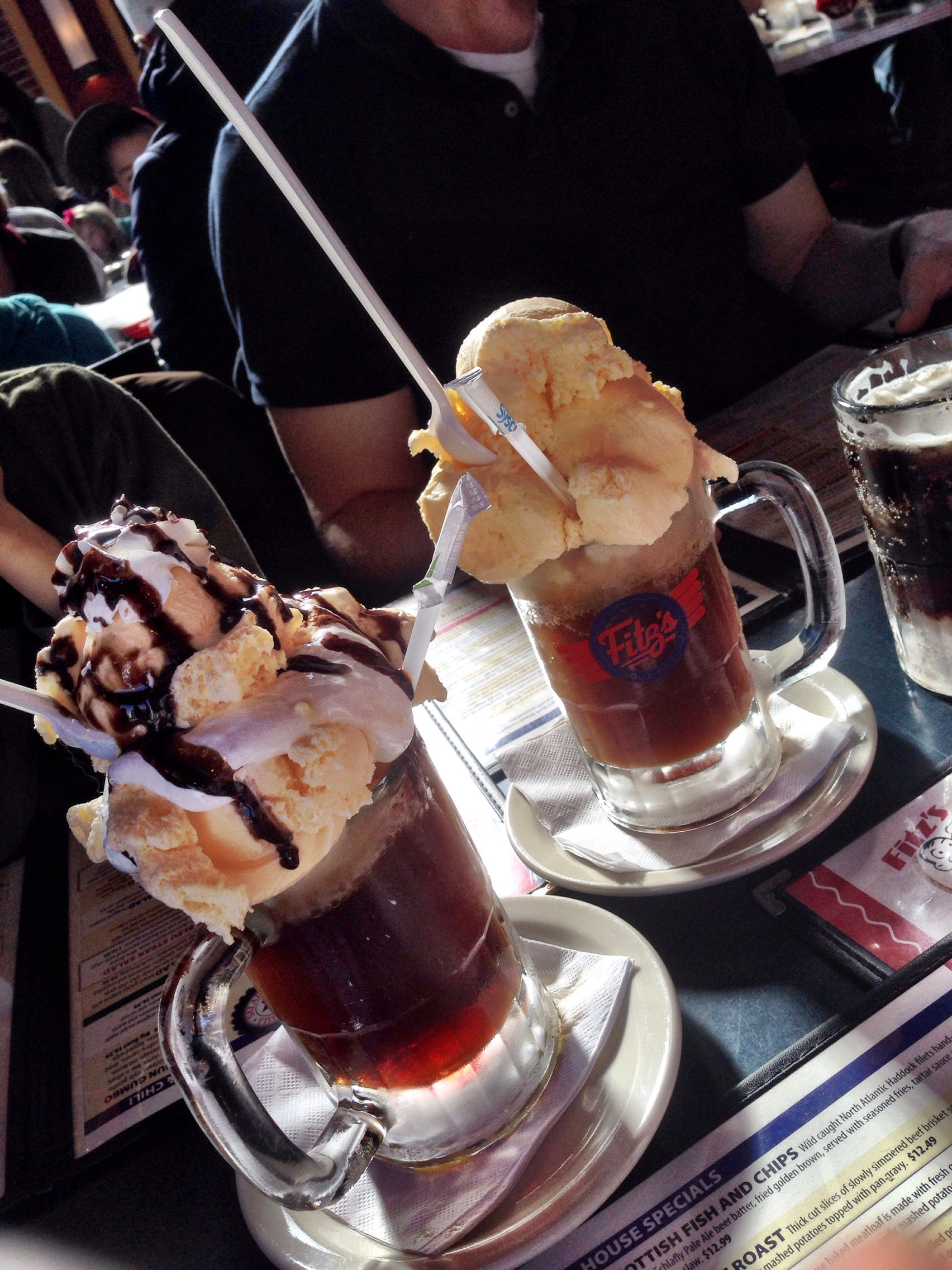 I think I gained 5 lbs here. So, we started out with drinks. The kids each got root beer floats with FOUR scoops of ice cream on top. Crazy. Brian and I both got the Ghostbuster. It is a root beer float with four scoops of ice cream, marshmallow fluff and Hershey’s syrup. Oh. It was. A.M.A.Z.I.N.G! If you are in St. Louis, hunt down Fitz’s! We only waited 5 minutes during peak lunch time, too… the place is HUGE and it is in sort of a neat little area in St. Louis, The Loop… lots of shops, old time area. 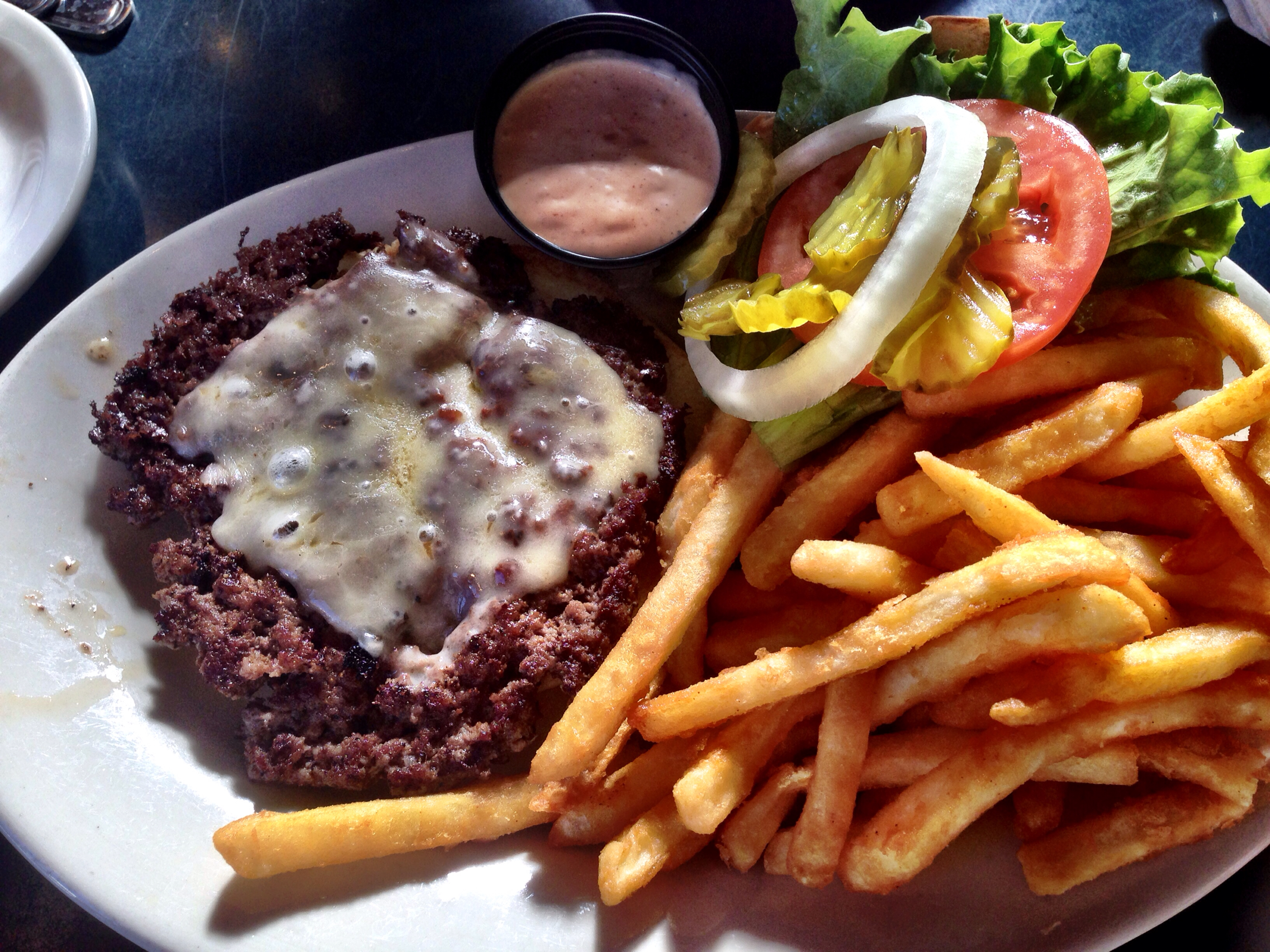 Ok, now the food. Nathan said the burgers were similar to Steak N Shake, but I think they were even better. I got their standard hamburger with white cheddar and seasoned fries. 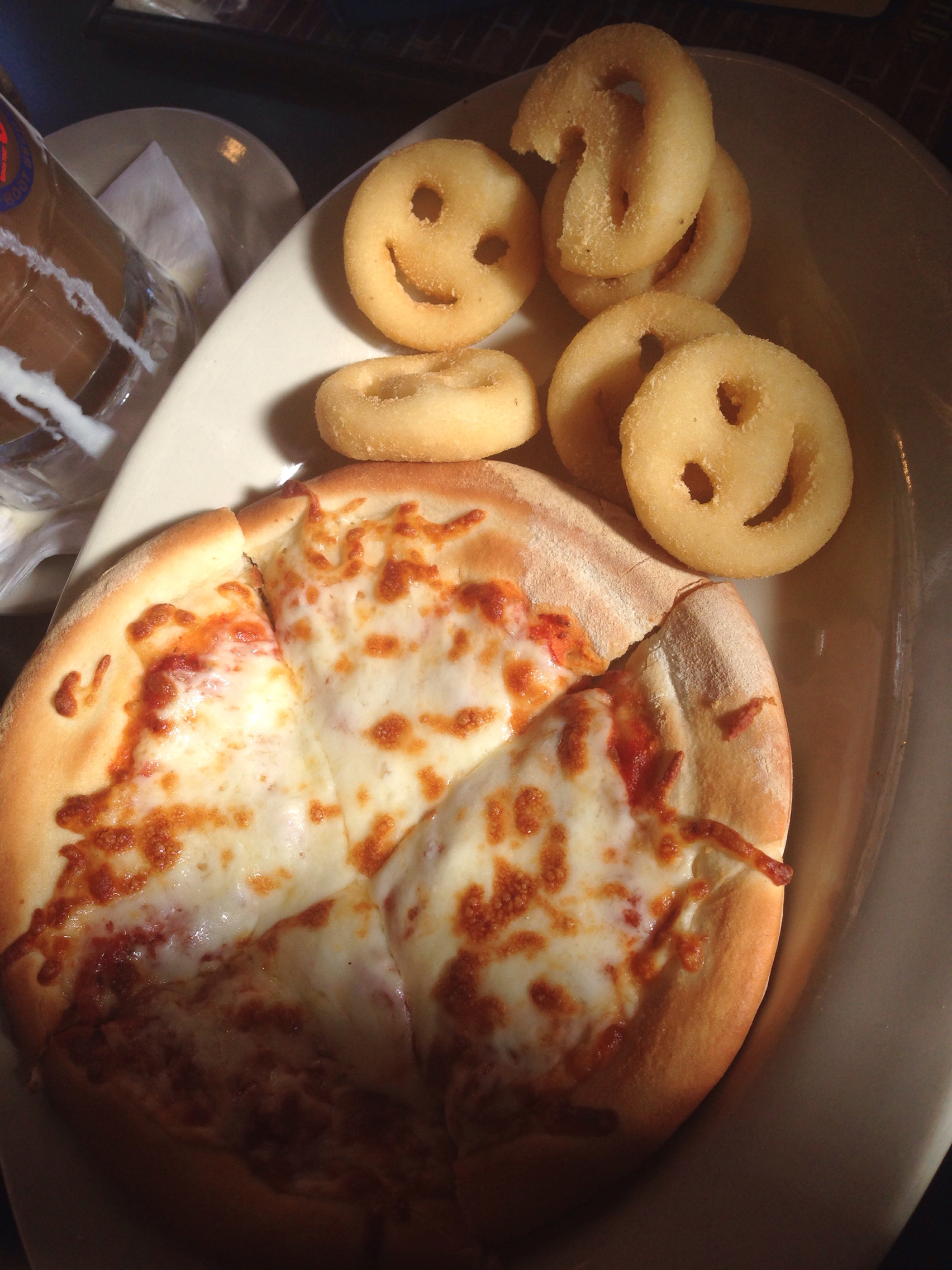 Sorry, I was too lazy to flip this photo. Nathan got pizza (so did Autumn) and they had smilie fries for the kiddos. Nathan said they have these same exact fries at school in the cafeteria Hm. 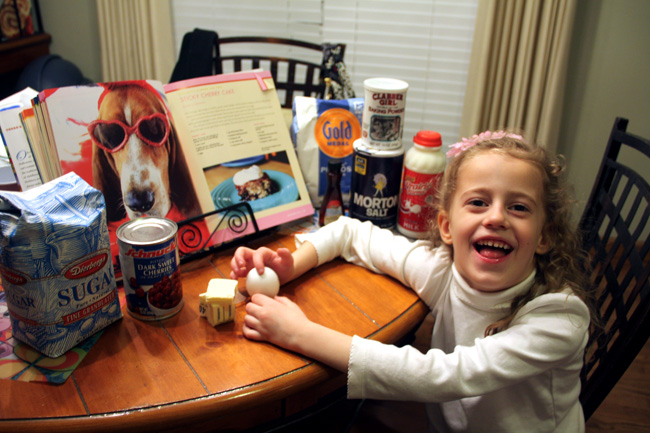 After Fitz’s we went home and rested a bit… well, I did like 7 loads of laundry that day, that wasn’t resting… but, I was WAY behind. Not sure why I didn’t do laundry on those two snow days I was home, but… oh well! Autumn and I also went to a little craft thing at her school. After we got back from doing crafts, we decided it was time to make Brian’s birthday cake! I wanted to try Pioneer Woman’s Cherry Sticky Cake… it is a recipe in her NEW cookbook, The Pioneer Woman Cooks: A Year of Holidays. This recipe was actually more like a bread pudding than a cake… and, I did find an old recipe of hers for Cherry Cake Pudding and I swear it is the same exact recipe. This was REALLY good… and sticky… and, Brian loves cherries so it was PERFECT! BOTH kids ate it too, which was amazing. My kids are picky. If you are looking for the recipe click HERE. 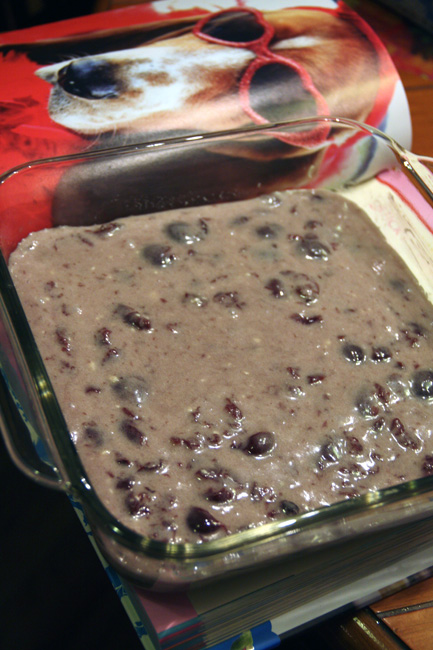 Everything mixed up and in the pan for the oven. (You can see all the step by step pictures leading up to this on PW’s link above.) 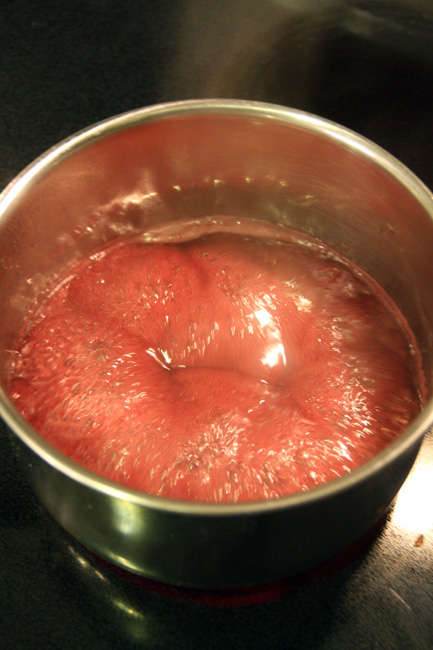 The sticky sauce. Wow. This stuff was amazing. Not so amazing when it came to cleaning the pan, like I said. Its sticky. 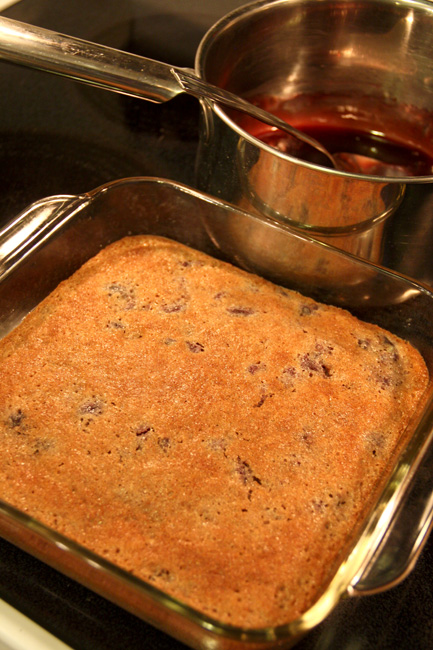 After you pull the cake/pudding/whatever out of the oven, you need to pour the hot sticky sauce on it right away. 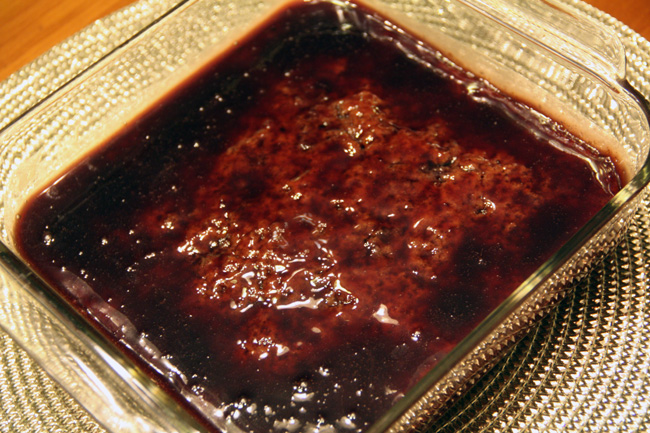 Then, you let the sticky sauce work its way INTO the cake for 30 minutes. Yep. You have to stare at it for a half hour before you can devour it. 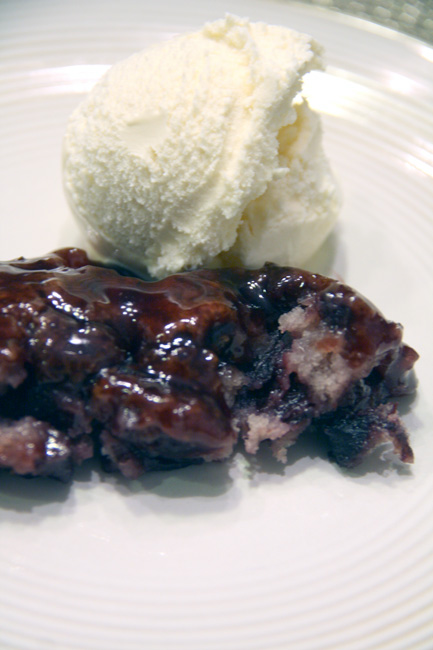 Pioneer Woman’s after picture if much better… it was dark in the house, no natural light… so, this is all I have… but, trust me. It was good. YUM.

And, that is it. Brian told me he had a wonderful birthday! Next year is the BIG birthday for him… so, I guess I have a year to think up something good for his next birthday. I would hate to disappoint. I have a little while longer until I hit that age (big smile), but when I do… I think a trip to Italy is in the works! Ha! 🙂 Well, we’ll see… I do hate to fly. It is amazing I made it to Paris. ha ha ha. 🙂