Are you ready for my FIFTH half marathon race recap? I will be honest, I really did not feel like running this half… there are a lot of hills and I was really worried I wouldn’t PR. PR’s are a big deal to me, which I hate… but, I think they are a big deal to most runners. Anyway, I was considering SEVERAL half marathons such as the Derby one in Louisville and the Nashville half as well… I decided to do the St. Louis Go! Half for the third time, because it was convenient to stay home. My half marathon training is a 12 week program and SOMEHOW I left out not one, but TWO weeks! I think I accidentally figured it for the Nashville half, which was really careless and stupid of me! So, I missed out on a big 11 and 12 mile run and four 6 mile runs! THEN, I got the stomach bug, but only missed a 6 mile run. I hate missing ANY of my training runs, so this really worried me… I was afraid I had slipped up and wouldn’t PR. 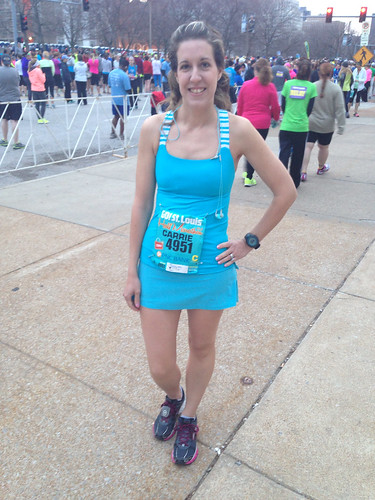 The photo above shows me before the race, I was freezing! The race start temperature was 38 and since I get so hot when I run, I decided to wear my sort of new Lululemon tank and skirt. Oh, and pig tails… because, a race is the only time I think pig tails are OK at my age. LOL. My outfit was perfect, I did not get hot once during the race… I was a little cold the first 2 miles, but I was warming up still! 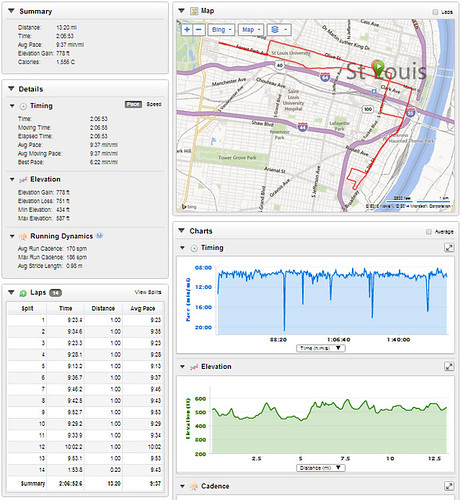 So, did I PR? Yes!! But, it was a challenge and I almost let it slip through my fingers at mile 10 when I stopped for some water. Above you will see what my Garmin displayed and what pace I ran at each mile. 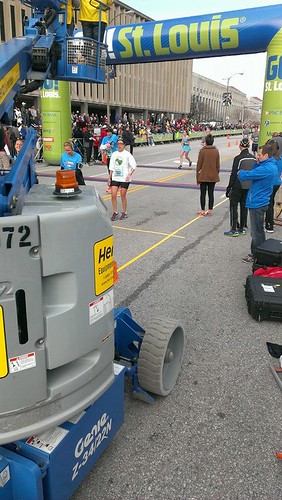 Brian got a photo of me crossing the finish line! I was excited to see him right after the race behind the gate. 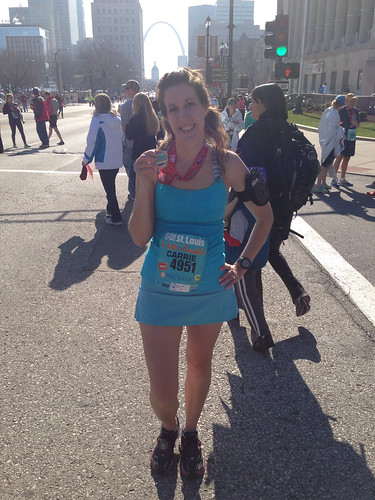 Here I am after the race with my medal! I have FIVE half marathon medals now! They had the BEST after race free swag ever and this was my third time running this race. We got 1 toasted ravioli, a Ted Drewes ice cream sandwich, banana, graham cracker peanut butter and jelly sandwich and it was COLD, cup of mixed fruit, a pretzel, water, beer, some sort of chocolate protein shake, blanket and a bag to put it all in. 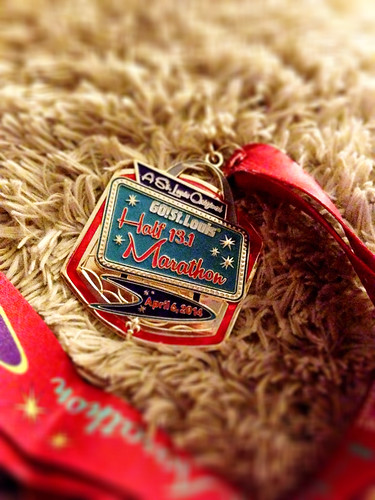 Here is a close up of my half marathon medal.


The race went really well, I love when I start a race strong and I don’t feel tired by the third mile. Even by mile six I was really feeling pretty good still! What I think really gave me a boost at mile five was I spotted the 9:55 pacer guy and I knew if I could keep up with him I could PR from my 2:09 time. So, I stayed either behind him or in front of him the until mile 10 and I lost him at a water break. Also, miles 6-8 are a race within a race, because it is one of the hardest parts of the race since it is so hilly. It is called Holy Hill because there is Christ Church Cathedral at the bottom and then Saint Louis University’s Catholic church at the top/end of Holy Hill. I am always happy to have Holy Hill behind me, but there were still a lot of hills after that! Whew! I was excited to be sprinkled with holy water this year, I always get missed! Crown Candy was also giving out nonpareil candies on Holy Hill, but I could hardly eat the one they gave me as my mouth was getting dry!

Around mile 12 I really started to question if I could catch up to the 9:55 pacer guy and I almost gave up on my PR goal. I thought, well I can PR at this race still, but it won’t be an overall PR. But, I knew I wouldn’t be happy with that, so I made it up in my mind that I was going to catch up to him (he really wasn’t that far ahead of me, but I was SO tired!) and I DID around mile 13! Then, the last half mile of the race I ran as fast as I could (which, wasn’t my fastest as I was SO exhausted!) and I passed the 9:55 pacer by quite a bit! I honestly think he was running a little fast for his pace, too! I have heard that happens a lot! Anyway, I finished at a 9:40 pace overall. I tried to run the entire race under a 10:00 pace and I did pretty well except for mile 12.

I would love a sub 2:00 half marathon time and I REALLY think I could have gotten it today if this race had been FLAT. I think I am going to sign up for the MO’ Cowbell half marathon race this Fall, because it is the flattest half and work towards this sub 2:00 goal. I really feel if I can hit this goal, then I am done running. Ha! Or take up biking for something different! Just kidding… maybe. But, I think if I were to hit it, I would probably try to run more for fun then for PR’s if I can ever accomplish it. 😉

I am also considering doing a full marathon in place of my regular two half marathons next year. I haven’t decided if I will do a Spring or a Fall marathon. I need to figure out if I want to do a marathon local or elsewhere, too. I think after this Fall, when I complete my sixth half, I will be ready for a full. I am going to train for the full marathon, but I am not going to be big on my finishing time. My goal is to enjoy it (because it is a heck of a lot of miles) and to FINISH it… so, yes… some walking will definitely be done during it and I have no shame. 🙂 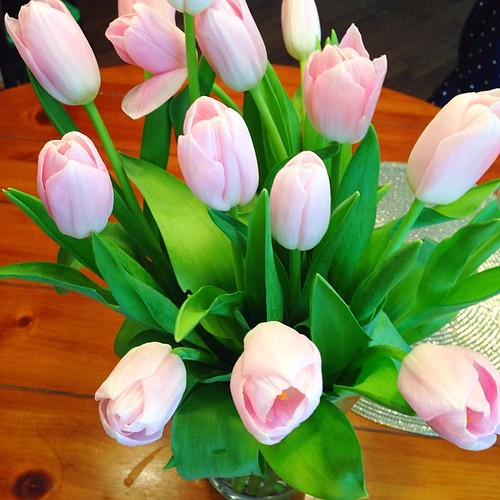 I rested most of the day after my half marathon, but I did get out of the house again to do a little grocery shopping. When I saw these beautiful pale pink tulips, I knew they were for me and I picked them up. Sometimes it is nice to reward yourself with a little gift after working so hard toward a goal. 🙂