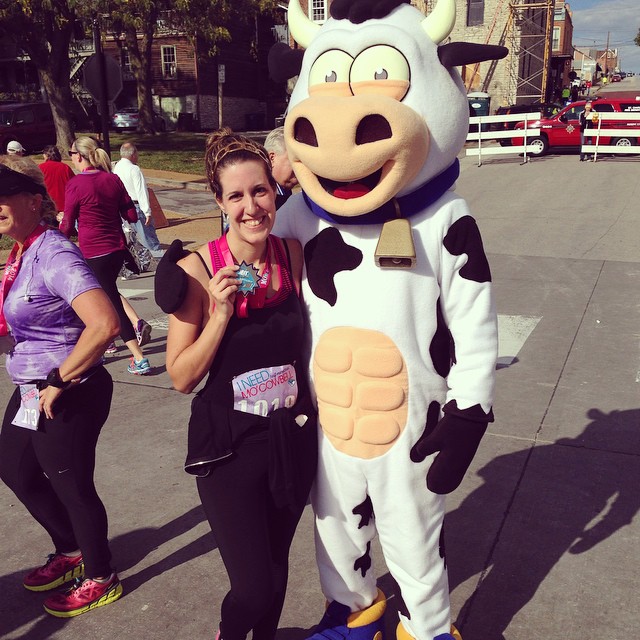 On October 5th, I ran my sixth half marathon! Here I am at the end with the cow! I hate recapping this race 2 weeks later as everything isn’t fresh in my mind… but, it has been a busy month! This was the first time I had ever run the MO’ Cow Bell and I had heard that it was a scenic and flat course. I really did good in this race, but I made a couple of BIG mistakes that I think prevented me from achieving a PR. However, I know I can’t PR every time, so I am not being too hard on myself about it (not).

My mistakes:
#1 – I didn’t get up early enough and we were rushing to get to the race which was 45 minutes away in St. Charles. The race started at 7:30 a.m. and we were in stop and go traffic at 7:00 a.m. trying to get over the bridge… when, BAM! Someone rear ended us in yes… stop and go traffic. I actually got my car back today and being that it is a 2007 and it already had some dents and scratches, it actually looks better then ever. Thank you, State Farm! However, I really could have done without the fender bender before my big race!

#2 – Due to being late… I saw the lines to the Porta-Potty and decided to skip it. BIG MISTAKE. I should have used it and started the race late. I landed up stopping at mile 7 to use the Porta-Potty and it cost me BIG on time… 6 minutes! AND, it added stress to my race when I realized I wasn’t going to be able to catch up… which resulted in me losing focus for the PR, because I knew I wouldn’t cut it with that kind of time loss. In order for me to PR in a half, I can’t be stopping for a bathroom break. This was the first half where I actually had to use one… and, well… that’s life, right? I can’t beat myself up about it now.

#3 – I started near the end of the race, NOT in my coral. In other words, I was starting the race with people that were WALKING before even the 1 mile mark!! Kudos to all of you walkers out there that walk most of a half marathon, but it was REALLY hard for me to maneuver around all of you… I was NOT happy with my pace for the first mile… AND, I saw one lady fall down! I’ve seen people trip during races, but I have never seen someone completely fall flat on their face… it was a horrible sound and sight, but she did get back up. It was crowded, people were trying to run around walkers and it was a mess! UGH, NEVER AGAIN will I start a race in a slower pace group!!!

#4 – THERE WERE NO PACERS running the race!!! UGH! I have a Garmin and I log my time, but usually they have people running these half marathons with signs held up high that tell you what pace you are at in the race while you’re running. I usually start near one of them, or catch up to the one I want to be at and I do not let him out of my sight (or I make sure he stays behind me) the entire race. Since I started so far back, I figured I would catch up to my pacer person… but, no… NO pacer… no support group to run with. It was a total bummer.

#5 – There were 3-4 grated bridges they wanted us to run over with holes in them large enough to fit the entire front of your shoe on… during these parts of the race, I had to maneuver over and run on the sidewalk. I did run over the first one and I had to slow down and practically walk over it, like mostly everyone else… because it was a sure way to fall or trip! Again, not sure WHY they chose a neighborhood with grated bridges? I’d rather run on cobblestone or gravel!

Ok… as you can see, the main issue was I got to the race late and it sort of caused a domino effect.

But, would I run this race again? Probably… It was a beautiful spot, even though some of the neighborhoods that we ran through had grated bridges, they were GORGEOUS… the houses were beautiful, pumpkins out everywhere, a beautiful lake and lots of horses were to be seen. We even got to run through a pumpkin farm, which was rather cool… and, a lot of small roads with corn fields on each side. I PR’ed with a 2:06 at the Go! Half last Spring, which was AMAZING since it is a pretty hilly race. And, the MO’ Cow Bell was not completely flat as they said it’d be… but, it seems how it always goes… there was quite the hill right around mile 10… right when you want to die, ya know?! ha!

I also think perhaps my view on the race would be different if I had PR’ed… but, that’s just me being honest. 🙂

In all honesty though, I finished at 2:15:17 and that isn’t all too shabby… I mean, I remember when I would have killed to have this time when I first started. 🙂 So, bathroom break and all, I’ll take the 2:15! 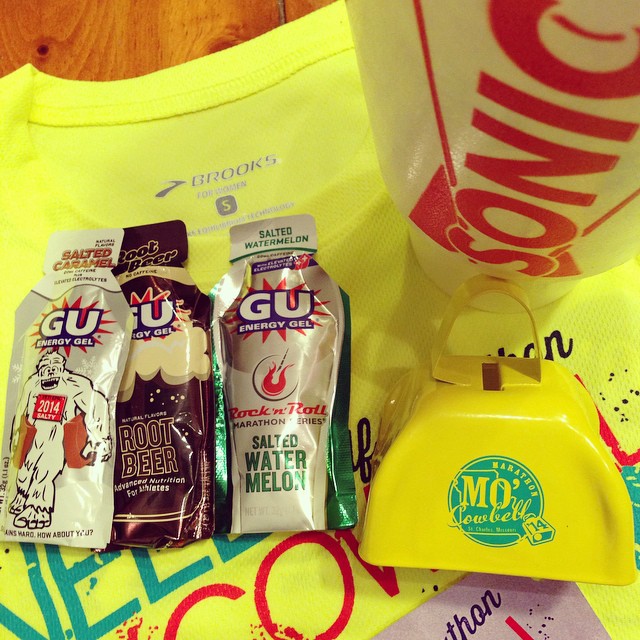 I always like to share a photo of the race shirt… the race shirt was from Brooks (my running shoes are Brooks), which I love! The root beer and salted watermelon are new flavors to me, but I have always enjoyed their salted carmel. Another flavor that is new (to me) that I really like is the espresso. 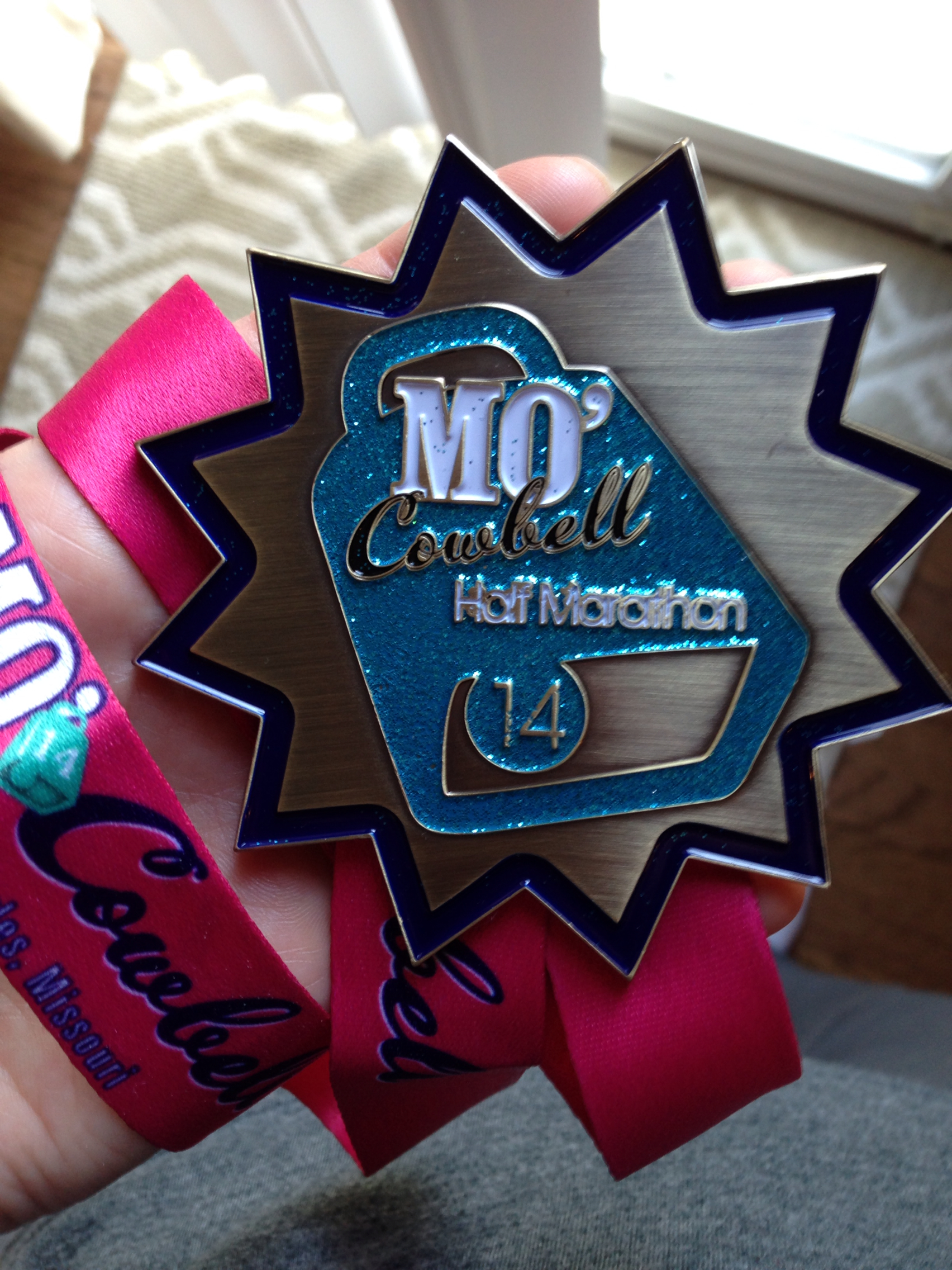 I now have SIX of these sparkling medals… goodness, I am crazy. I am going to move on to a FULL marathon this Spring… the St. Louis Go! Does that make me even crazier? I really don’t feel I’ll ever be ready for a full, so I am making myself do it… just ONCE… because, I’m not crazy enough to do it twice. I just want to cross full marathon off my bucket list and then I’ll be a happy camper. 🙂

Linked up with:
Mommy Monday