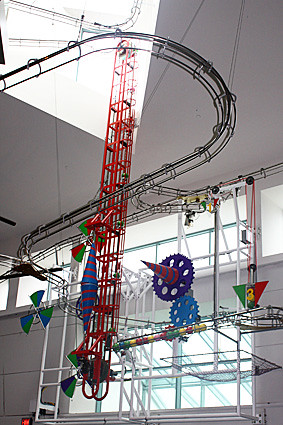 Today it was really sort of nasty outside, so the kids and I stayed at home and relaxed until lunch time… I am working on potty training Autumn, and of course she went poopoo TWO times on me in her undies! That wasn’t very fun… but, then when I was taking a shower she came in and went peepee on the potty. She is so cute, she will go and then dump the peepee in potty container into the bigger toilet and flush it. I think tomorrow I am going to start rewarding her when she pee’s with 2 M&M’s. I hope that helps a lot. I hope. After lunch, we went to the Science Center. Here are the balls that you see when you first come inside. 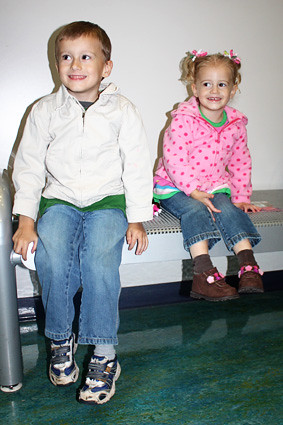 Two smiley kids… Since when did the Science Center start charging for parking? And, NINE dollars! I was a little bummed that the Discovery Room was closed for cleaning today, as I have never taken the kids to see it. We will try again sometime in the future, as I think its ages 3-7, so Autumn is still not 3. There was still plenty to see there, though, and we had a lot of fun! 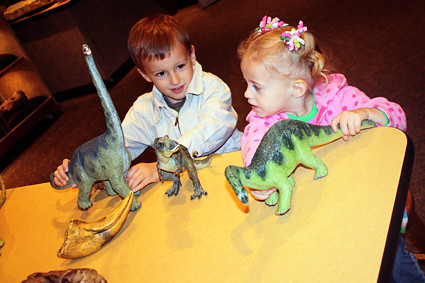 There was a lady (you can’t see her in the picture) that told the kids all about the dinosaurs they were holding… Nathan learned about a Brachiosaurus who was a dinosaur that ate leaves and even rocks that helped them digest their vegetarian diet. 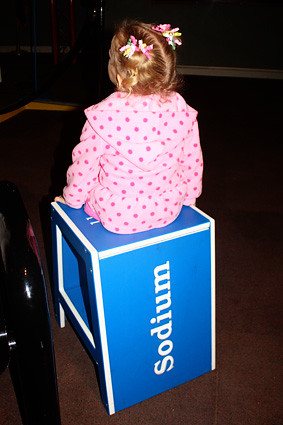 We watched part of a show where we saw a scientist make a huge cloud that poured over into the audience. Autumn at on the sodium seat. 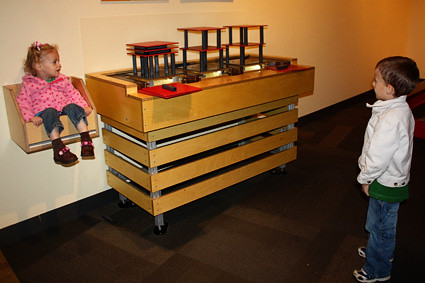 Nathan and I built 3 buildings, the different bases had different stabilizers. Autumn, who I have now knicknamed Autumn the Explorer (since she loves Dora so much) MIGHT have been placed somewhere by her Momma so Nathan and I could build our buildings without her little road runner legs carrying her out of site. :o)- 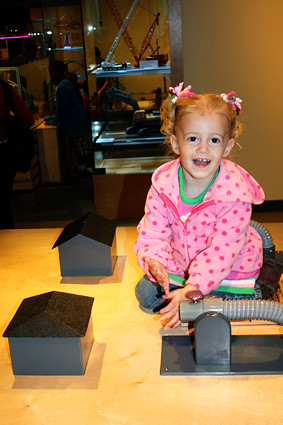 There was a hurricane table where there was a blower that you could angle to blow off the different styles of roofs on these two houses. Autumn was hilarious, she thought it was a heat dryer like you would find in the women’s restroom. She was rubbing her hands like she was drying them. Too funny! 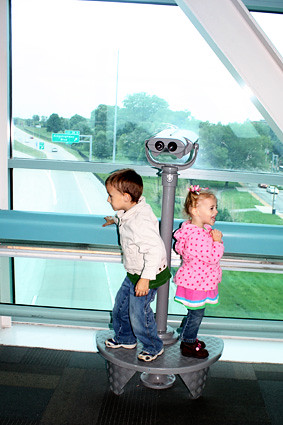 Then, I took the kids to the section that goes across Highway 40. They had fun looking at the cars through the scope. They got really excited when they would see a school bus go by. 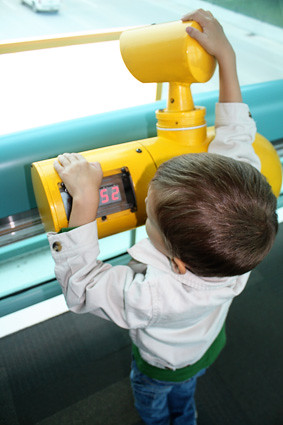 Nathan had fun seeing how fast different cars were going 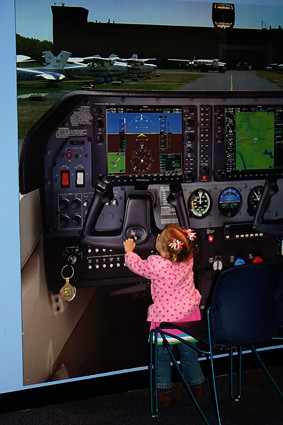 This is neat, it looks like Autumn is really flying because she has her hands out, but it is really just a painting on a wall- not an actual yoke.

What a fun day! Then we came home and relaxed some before I took the kids to see their Daddy for dinner. While Jeremi had the kids for a few hours, I went for a run for the first time since… February 22nd! Wow! I have made a goal for myself to run 2.5 miles (going to start out small since I haven’t ran in quite some time) four times a week. I am going to try my hardest to stick to this… so we will see. My goal is to run a 10k in October again- the same Halloween Go! race that I ran last year.