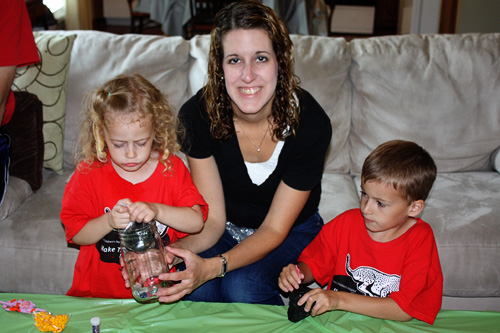 I had Nathan’s 6th birthday party the Sunday after his birthday. I put a lot of energy and thought into his party, as I LOVE planning parties. I decided upon a Star Wars and Money theme… just because, he loves both! The morning of his party day was the Make Tracks at the Zoo, so when we finally got home from the zoo, it was only an hour and a half till party time! We had a small party with just close family, and the kids. I had done a little craft table at Autumn’s birthday, and decided to do the same thing with Nathan’s party. It gives the kids something to do while I do last minute food preparations. I decided upon Galaxy Playdough (look at Autumn in the photo, trying to get her playdough out!) with lots of little fun things to stick in it (shiny pebbles, glow in the dark stars, glitter) and cutters. The kids LOVED it. It was a little messy though! 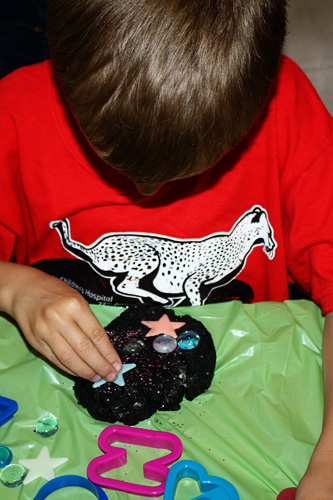 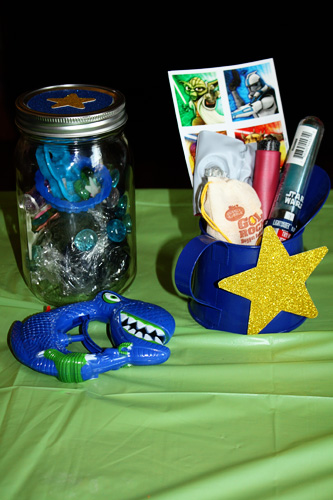 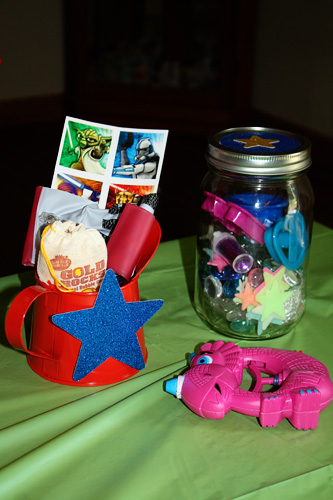 These are the favors I made for Nathan and Autumn. I figured since it was Star Wars and space, I’d use a ‘little dipper’ (watering can) to hold their favor goodies in. There is just stickers, a life saber sucker, blow up light sabers, a sack of gold and a watergun in them. Then, the jar next to it is the Galaxy Playdough craft. 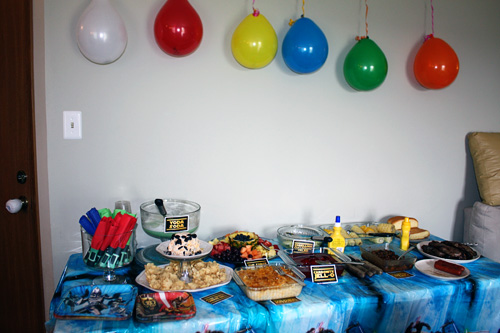 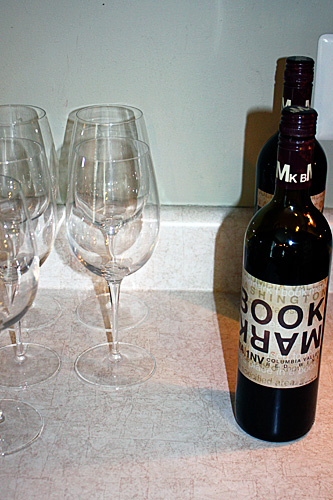 Jeff and Tracy were kind enough to bring some wine, to pair with the Anne Gunn’s steaks! 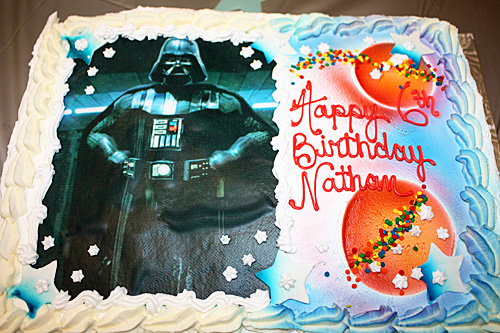 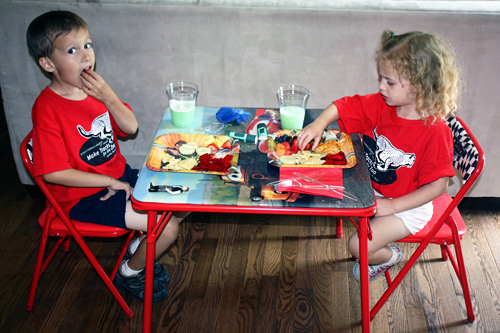 The kids enjoying their food. Gotta love the kiddie table. 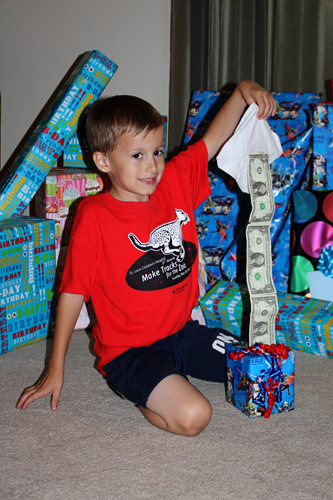 After eating, it was GIFT opening time. I, of course, had to do a money-themed gag gift on Nathan. Got this idea from Pinterest. It was a Kleenex box I wrapped in Star Wars paper, then I taped six one dollar bills together, and when he went to pull the tissue out, the long string of dollar bills came out. He LOVED it! He told me he wants a gag gift at ALL his parties now! 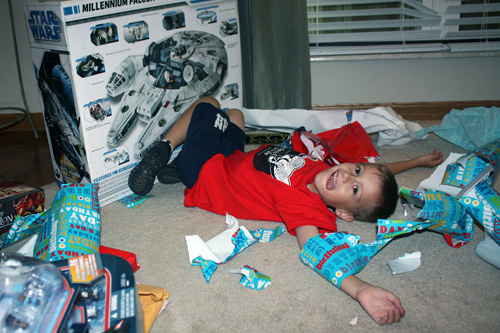 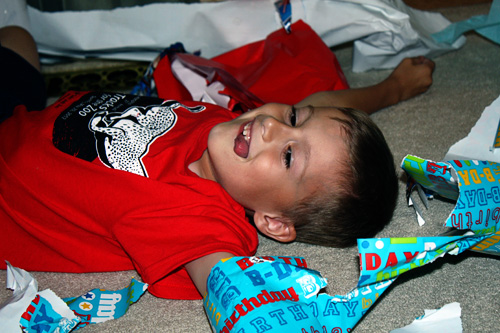 Nathan’s reaction after he opened his BIG gift from Mom. A Millenium Falcon ship for his action figures! Nathan also got a skateboard and ramp, a Millenium Falcon and Cars2 book, some Skechers Hot Light shoes, coin books (so he can collect the states and presidents), etc.! 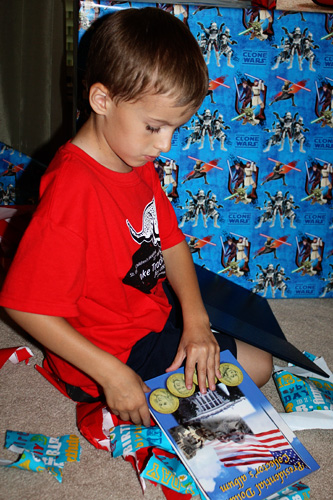 Nathan with his coin books… guess a trip to the coin store is in order! 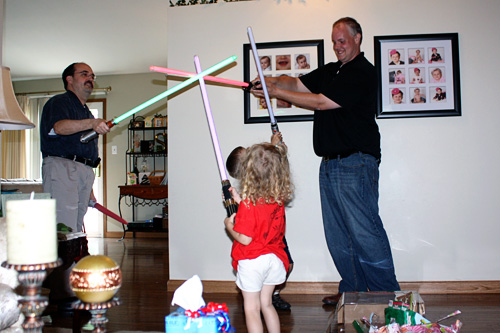 Brian also brought over his collection of life sabers… with a new one for Nathan. I stayed out of this fight! Ha, ha! 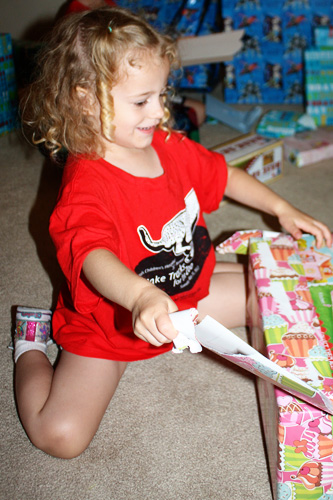 Even Autumn got a little gift, a Lalaloopsie Doll House! 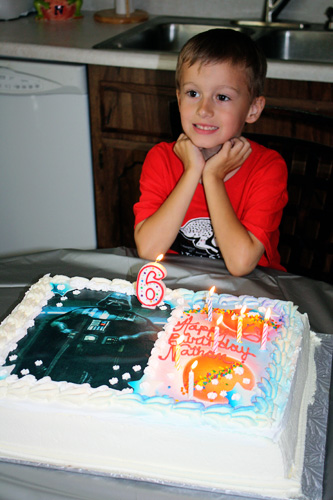 After opening presents, we did cake. Nathan was excited about his Darth Vader cake, he helped me pick it out at the bakery weeks before his party! 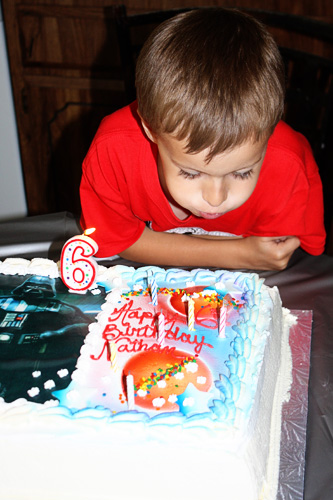 Blowing candles out by age 6 is as easy as can be. 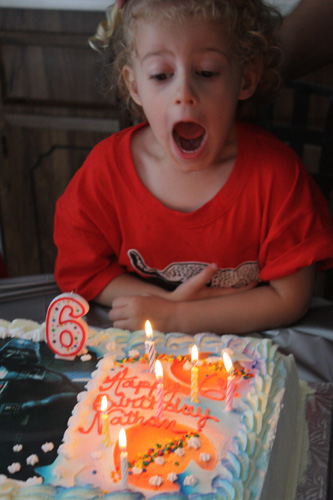 Even Autumn got a turn at blowing the candles out. She took these HUGE breaths, isn’t she silly? 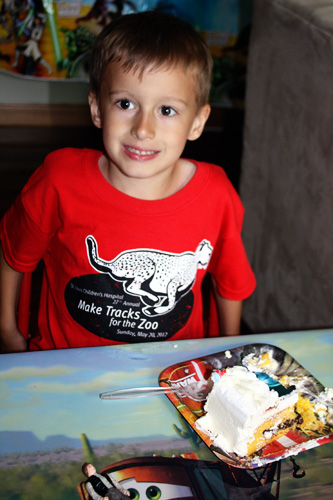 Nathan with his slice of cake 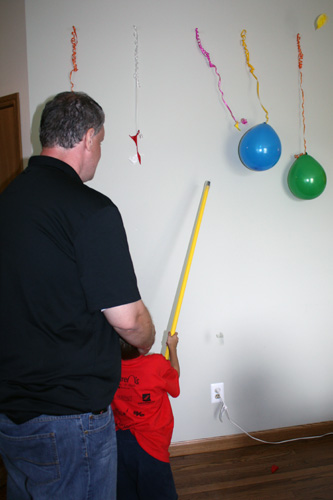 Next, Nathan popped his six money balloons. He had Brian cover his ears, he didn’t like the sound of the balloons popping! 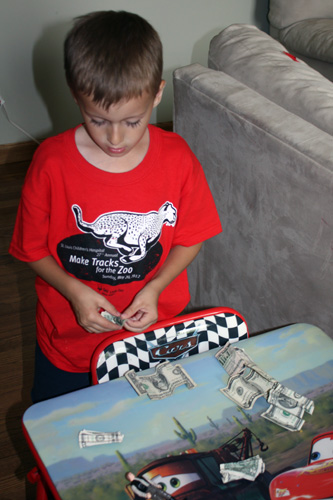 But, he did like counting all the money that fell out of them. 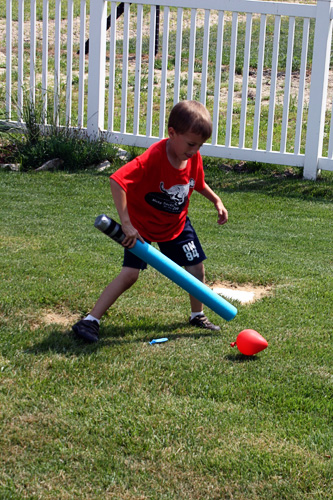 Next up, was a game outside… Brian and I made life sabers out of pool noodles. Another idea from Pinterest. I had everyone try to hit their balloon from the front of the yard to the end of the yard. 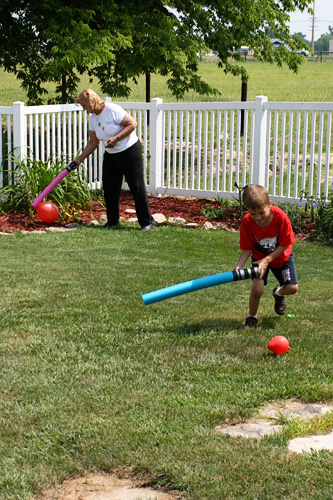 Nathan and my Mom, my Mom isn’t doing so good with her balloon in my garden! Ha! 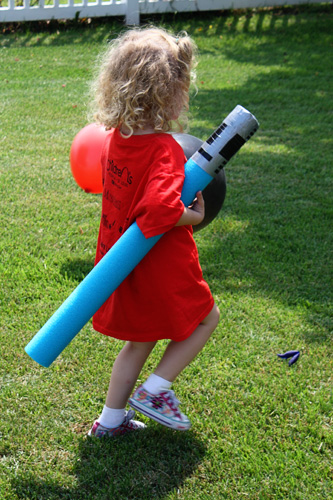 Autumn cheating, she’s carrying her balloon and her life saber across the yard. How funny. 🙂 All in all, a GREAT PARTY! Happy 6th, Nathan!