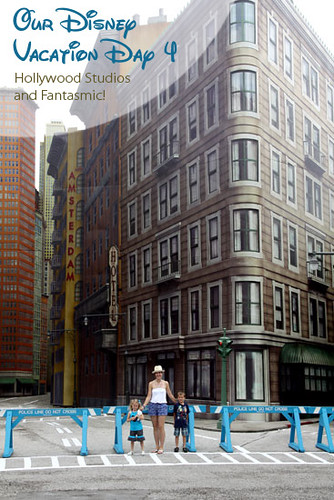 Today I am sharing with you our last day at Disney, we spent it at Hollywood Studios. This was the only park that Brian and I did not visit when we came here for the half marathon last November… I did run through it though in November and saw all of the Christmas lights. It was Brian and the kids first time there… and I had not been there since my 8th grade class trip to Disney! 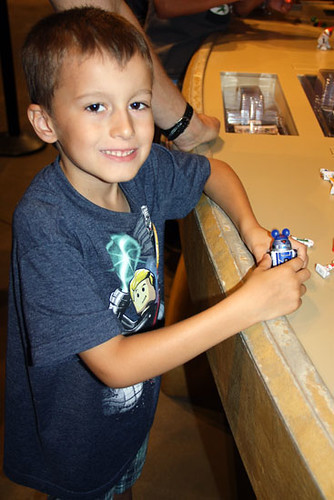 One of the first things we did at Hollywood Studios was sign Nathan up for the Jedi Training and then we headed over to ride Star Tours (which, Autumn made me and her get out of the line for, she thought it looked too scary… whatever.). The ride let out into a gift shop (that happens a lot at Disney!) and Nathan wanted to do the build a droid thingy. Boy, can you tell he has ran on late nights and early mornings on this trip by this photo? He looks tired to me! 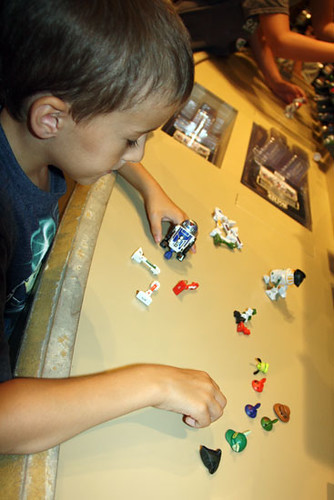 The build a droid lets kids design their own droid action figure. Its really neat, they pick out a body, a head, arms, legs and even a hat. 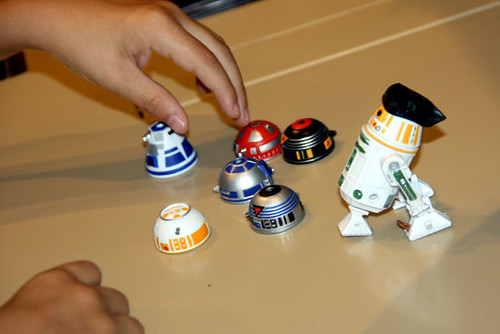 They even had a pirate hat! As you’ll see in the first photo, Nathan selected a blue Mickey ears hat. 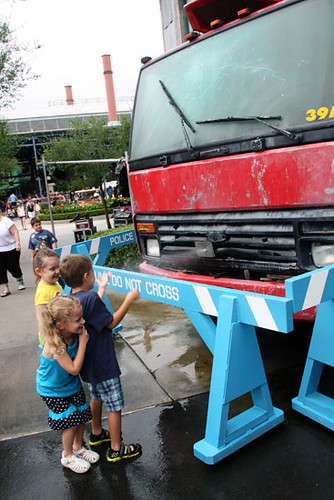 Our first fast pass was for the Toy Story Midway Mania! carnival ride and the kids loved this leaky fire truck outside it. I love how Autumn is standing BEHIND Nathan so that he gets wet! 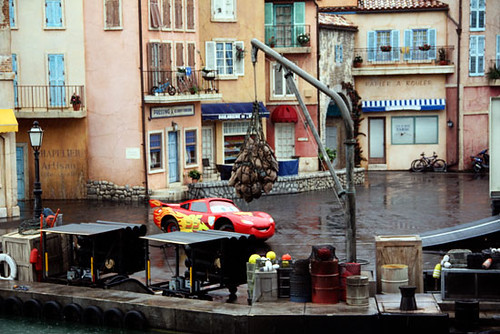 The Lights, Motor, Action show was really neat… we even saw Lightning McQueen. 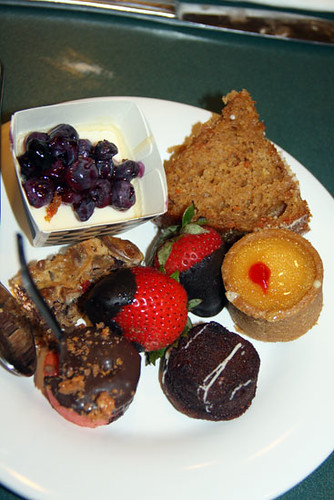 For dinner, we had reservations at Hollywood & Vine and had a buffet dinner. It was really good, I would definitely come back here and the kids found lots of things to eat on the buffet. They do not have characters here for dinner, but do for breakfast and lunch. If you trade those Disney pins, they had a huge trading pin board at the front of the restaurant. Here is all of the desserts I tried… yum! The best part about eating here was that it included the Fantasmic Light show in the package! 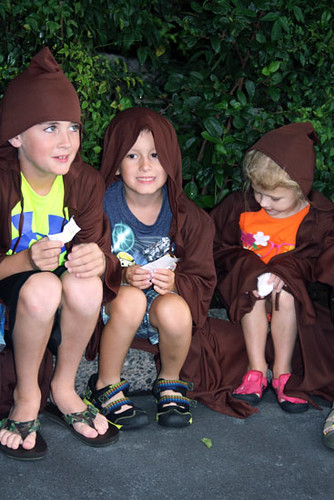 At 5:00 p.m., Nathan had his Jedi Training… then they do a show on a stage outside. Since Autumn really wanted to see the ‘yellow’ princess (as she calls her), before we left Disney, we went to the Beauty and the Beast show while Brian took Nathan to his Jedi training. That way, both kids were happy and doing something they were interested in. Then, by the time the show was over, we got to see Nathan on stage. Here he is waiting outside… he was really nervous to fight Darth Vader! 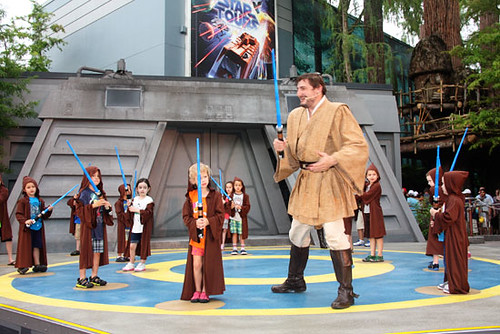 The kids are practicing on stage, Nathan is on the left with the plaid shorts on. 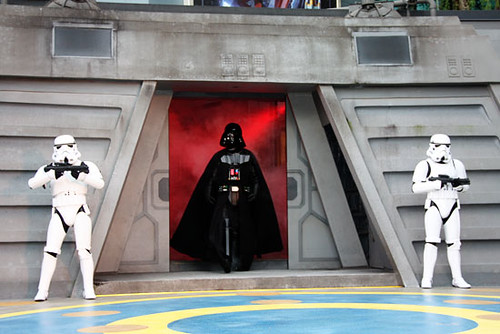 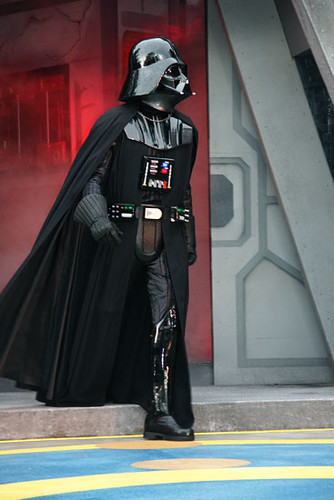 Then, they cleared the stage and… DARTH VADER came out. He really looked so real and did a great job… even talked. It was just a.w.e.s.o.m.e. The age range for this is 4-12 years old, but there is NO way Autumn would have done this! 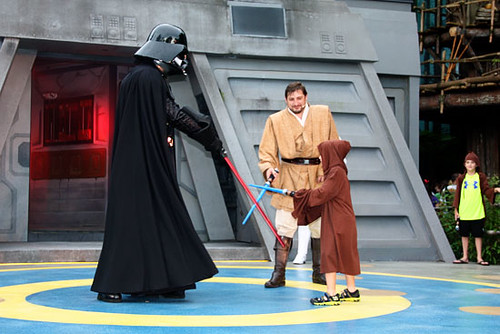 Each kid got a chance to fight Darth Vader individually and then they fought him as a group. They taught the kids several moves to use to attack Darth Vader with. 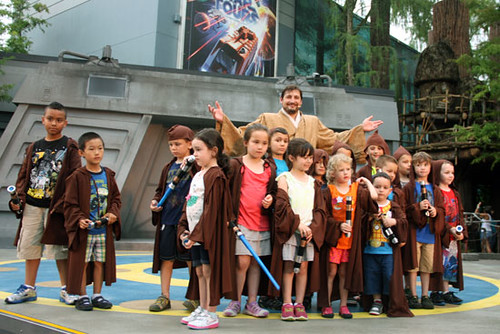 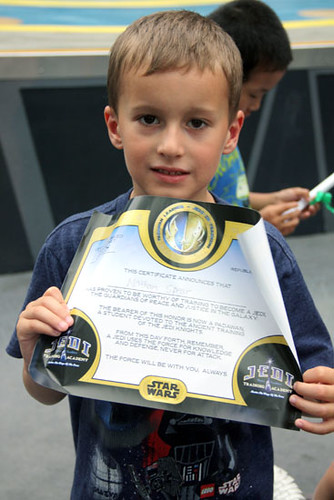 Nathan’s Jedi certificate. He was so proud of it. Autumn was still hiding behind my leg from seeing Darth Vader when he got off the stage. Poor girl. Ha! 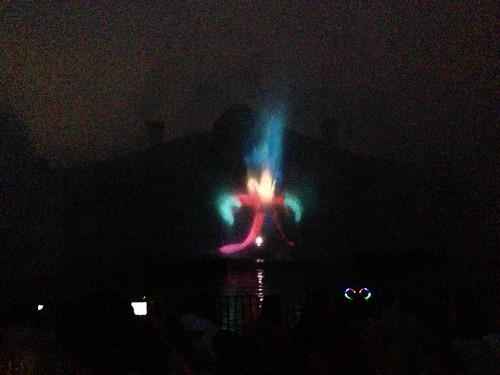 At 8:00 p.m. we headed over to the Fantasmic stage area to get our seats for the 9:00 p.m. show. This show was great, there was water, pyrotechnics and lights. Here is Mickey being reflected on the tower that was on the stage. 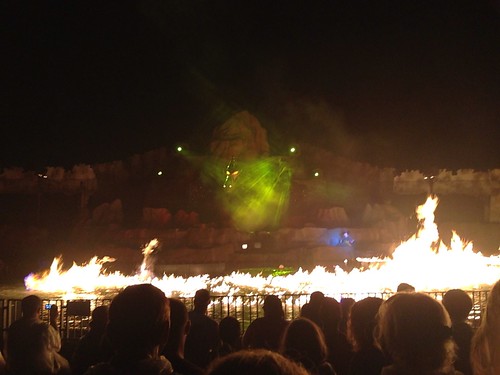 Not sure if you can see it in this photo, but there is a dragon breathing fire out onto the water. We were so close we could feel the heat from the fire! Very cool! 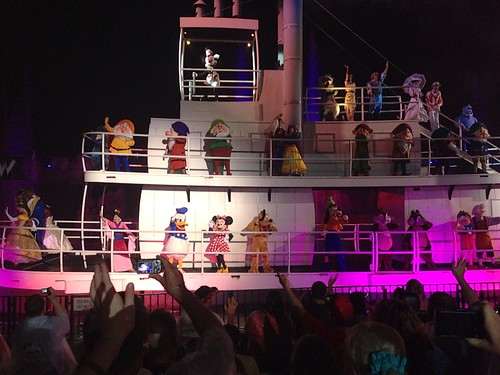 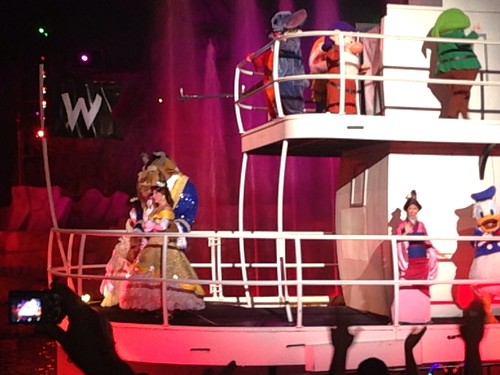 Then a huge boat floated past with all of the Disney characters and princesses! Both kids were just in awe! I was in awe!!! Fantasmic was one of my ALL TIME favorite Disney experiences EVER! Disney is just crazy and in a good way! 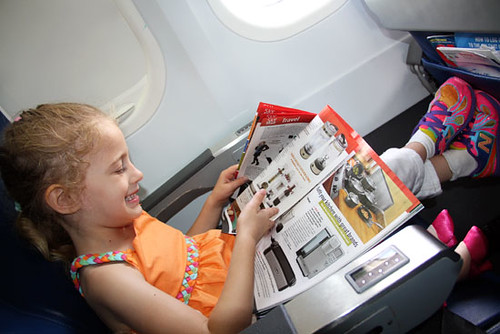 And, just a few pictures on our way home… Autumn reading a magazine she found on the plane. Such a cutie. 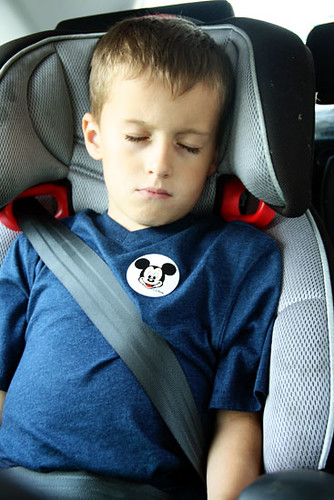 Nathan never naps, never falls asleep in the car… unless he is sick. But, on the way to the airport to White Castle (hey, I had a craving.) he slept. As soon as we pulled into White Castle’s drive though the boy was awake and ready to eat! Ha! 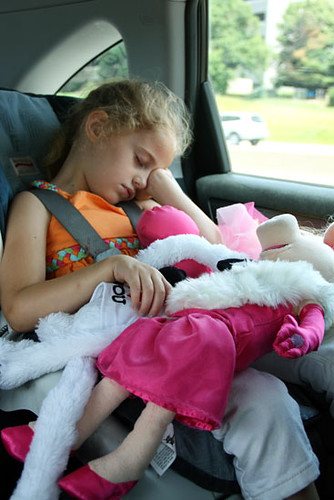 Autumn fell asleep with her face (eye!) on her hand. LOL! She is holding her Miss Piggy that we had quite some trouble finding… she wanted it earlier in the day at Hollywood Studios from a street kioske, but I told her no… to wait in case she wanted something else. Well, she wanted Miss Piggy, so at 5:00 p.m. I went back and the kioske shop was closed! We went in the Muppets store and they had none… we went in several other stores and no luck! Autumn was so upset and I felt bad… but, Brian came to the rescue and found the same exact Miss Piggy she wanted. Whew!!! Brian saved the day!