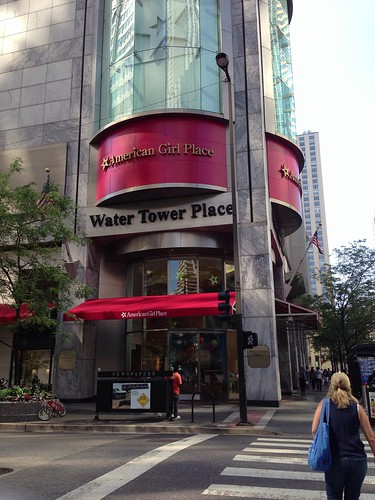 Our second day in Chicago was pretty laid back, too! We had our ONE thing booked, a Cubs game at Wrigley field but it wasn’t until 2:00 p.m. So, we lounged around in the morning and then decided we would check out Michigan Avenue and do a little shopping for us and get souvenirs for the kids. I already shared on my Friday Five post how we hit Michael Kohrs and Lululemon, but we also hit the American Girl store! This is where I found Autumn’s souvenirs and I dream of taking her to the Chicago store someday… although, we do have a smaller store in St. Louis! 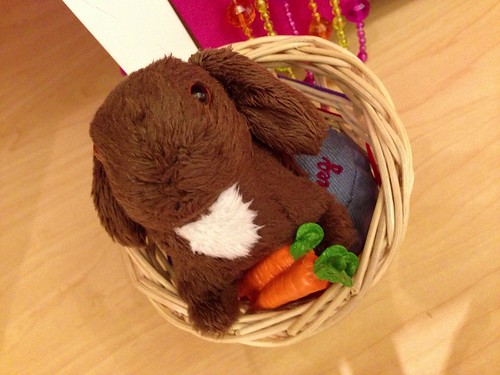 I almost got her this adorable bunny, with a basket, pillow and carrots. Awww! This would be cute for an Easter basket. 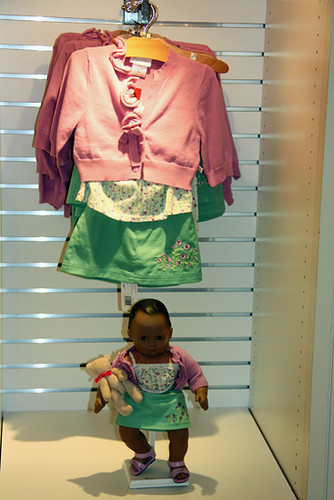 I LOVE this outfit, again I am thinking of Easter… not sure why, because it is going to be the Fall soon! But, I snatched a picture anyway. Autumn has a bitty baby and the bitty twins… but, she is hoping for the big girl doll someday. 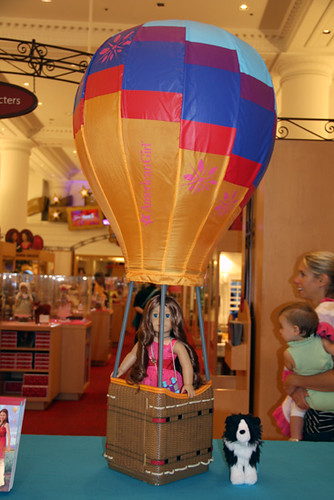 Sometimes I wonder while I am in American Girl stores… like, who would buy their girl a hot air ballon for their doll? Really? Who? I am sure someone does. And, when I showed Autumn this photo, she wanted it! 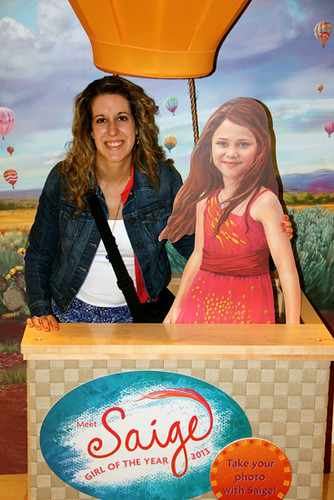 Of course, I was able to get in a real life hot air balloon with Saige, except… you can’t really tell I am in a hot air balloon, because Brian forgot to include the balloon in the photo! LOL!!! But, I can’t complain as he is doing a terrific job with my 30×30 photos. HA! 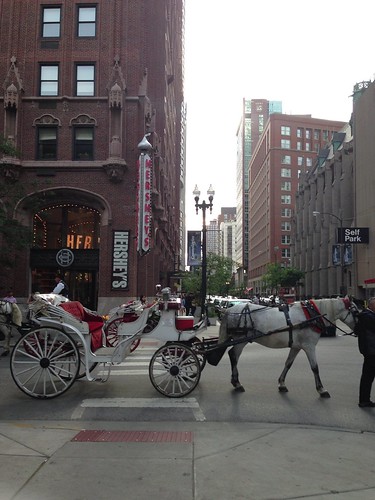 We stopped in the Disney store for some Planes souvineers for Nathan and then we saw the Hershey store. Ahhhh. Yes, that was a definite stop for us. 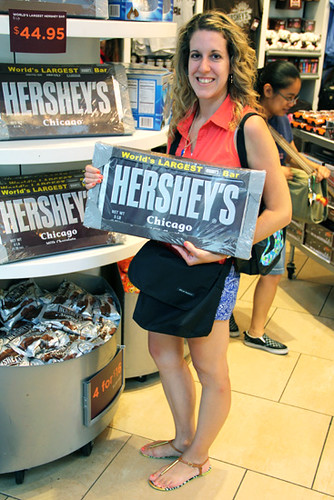 Of course, I had to get my photo with the largest Hershey bar ever. With the biggest price tag ever, too! 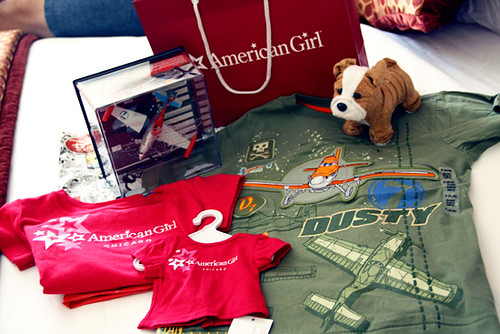 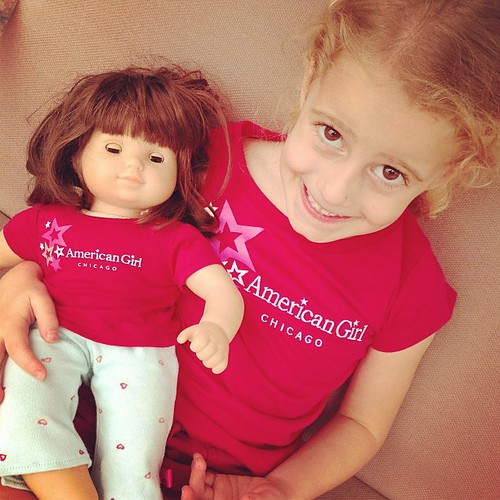 And, since I take photos of everything, here is a picture of their souvineers (minus a couple of things we grabbed at the Hershey store) and a photo of Autumn with her shirt on and Momma Baby’s shirt on, too, after we got home. 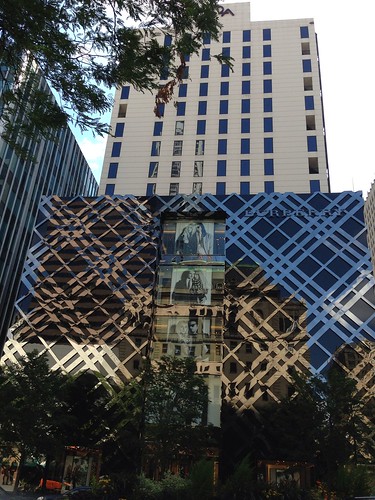 I love the outside of the Burberry store. 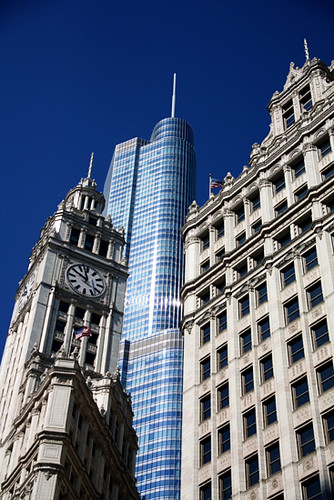 The Wrigley Bldg. and Trump Tower. We checked out the restaurant inside the Trump hotel (online that is, not in person) and WOW that is an expensive place to eat at. It makes Ruths Chris look cheap. 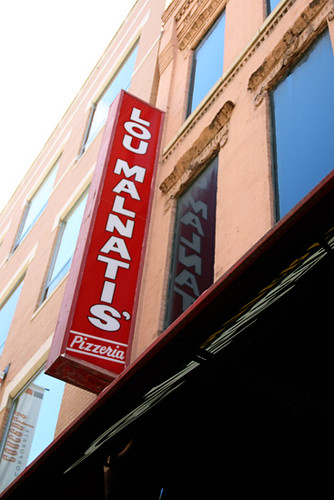 For lunch we decided to check out Lou Malnatis, which was recommended by our hotel. Delicious! 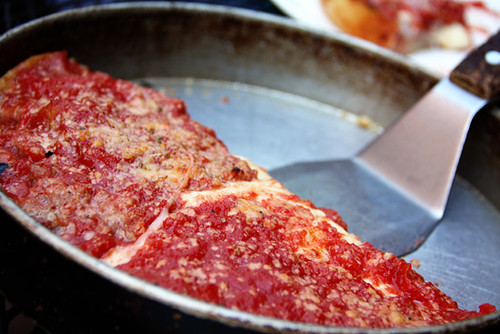 I just love Chicago pizza. I am weird as I prefer cheese pizza, but Brian got sausage on his side. 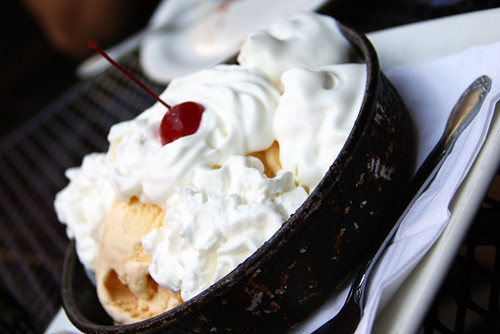 Then for dessert we got a FREE hot cookie with a coupon from our hotel. We weren’t expecting there to be ice cream and whip cream smeared all over the top! YUM! The cookie was nice and gooey and hot. I would come back here in a heart beat. Our total bill was only $20 before tip and that was with 2 salads, a medium pizza AND the free dessert. Oh, and two sodas. Not bad at ALL! 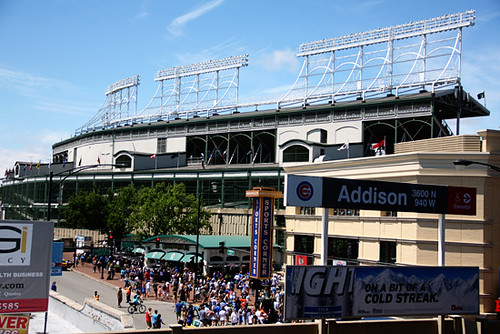 After lunch, we went back to the hotel to freshen up and then we hopped on the L to head over to Wrigley Field. Here is a photo from the outside of it, I had NO idea we would be standing in front of Wrigley Field AGAIN the next day on our bike tour! LOL! Four hours on a bike gets you to quite a few places in Chicago! 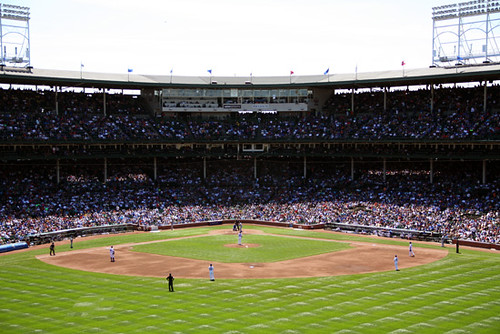 So, we got there and they would NOT let us into the stadium from the front, because we had bleacher seats. I was like, what?! So, we went to the side of the stadium and went on up to the bleachers. Brian wanted to sit in the bleachers, because they were legendary for their craziness. UM, so… we got there and there is NOWHERE to sit. I seriously think people camp out a few hours before the game starts to get the best seats. Oh, and we didn’t know the seats were first come first serve. As in, NOT numbered. They don’t do this at Busch Stadium! So, we got our beers and sat in the last row in the entire stadium. I wasn’t happy. I know, I know, I am such a PITA. So, I made Brian get us closer seats and we made people scoot over to fit us in. I wasn’t going to sit in the back, ok? So, I was much better after we got all settled in and we even had Cardinals fans next to us! 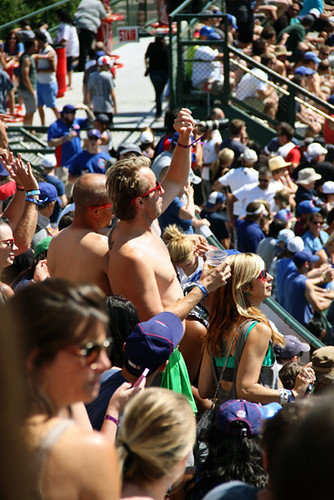 Umm. So, yeah… The bleacher seats were interesting. I had NO idea that it is a total Chicago thing to take off your shirt (just guys!!) when the game gets super close or serious. Yeah, I saw a lot of shirts getting taken off. AND… We saw ONE guy… a very BIG and ummm. hairy? guy remove his shirt… but, oh, it gets better. He then started dancing around and rubbing himself all over with Cub claws. Ahhhhh. Yes, we got the real deal in the bleachers. I thank Brian for that. I didn’t take photos of the guy with the cub claws, I was in SO much shock that I didn’t have time to react. Which is weird for me since I usually have my face glued to the camera. Oh and these Cub fans love to talk dirt about us Cardinals, oh I heard it all! 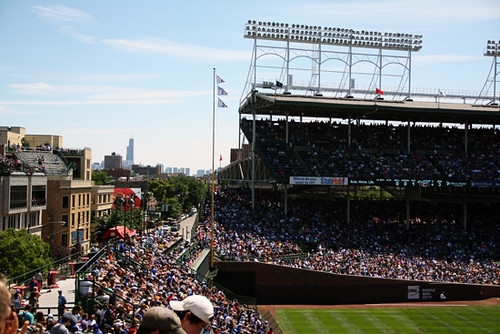 Love the Chicago sky line! I wish I could have taken photos of the score board as Wrigley Field is super old and they actually have people pop their heads out and they change the numbers and all that. But, the score board was directly behind us. 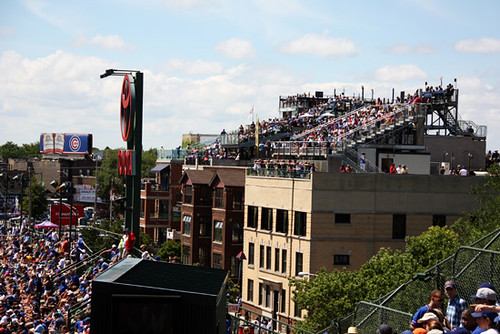 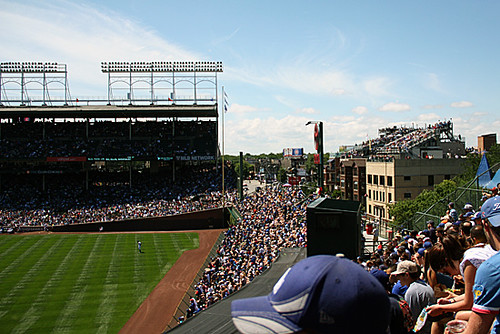 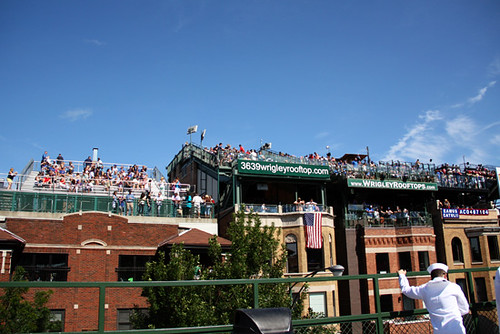 Next time we come to Wrigley Field, I want to see a Cardinals and Cubs game AND I want to watch it from the Wrigley Roof Top!!! I have heard these seats are amazing, they are on the top of condos and all your food and drinks are included. Everyone was talking them up, they are kind of expensive seats, too! But, what a fun experience it would be! 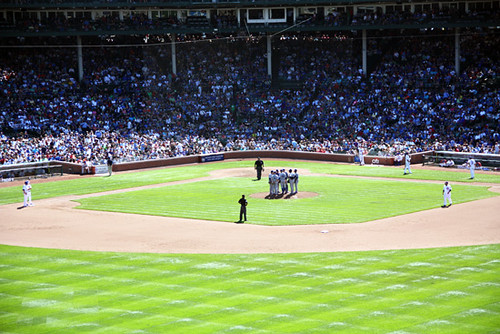 At one point, the game got really serious. Loaded bases, Dodgers had little meetings sevral times. Yeah, lots of shirts came off with that one. Don’t worry, Brian didn’t take his shirt off… we love the Cardinals! 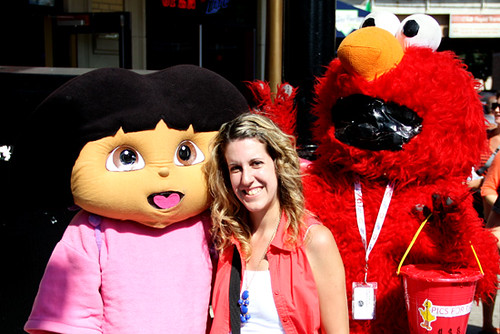 We left the game a little early, because we were worried about major crowds on the L. I am glad we did leave early as the L was already crowded. I did get my photo taken with Dora and Elmo on our way out. I love how Elmo has black electrical tape for his mouth. Ha! I suffered through this photo, because I wanted to show Autumn that I saw Dora. She loves Dora and just had her picture taken with Dora not too long ago at the mall. 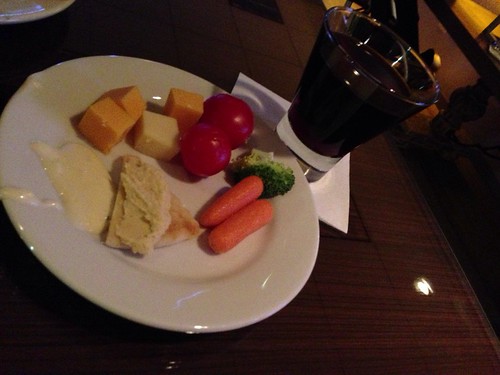 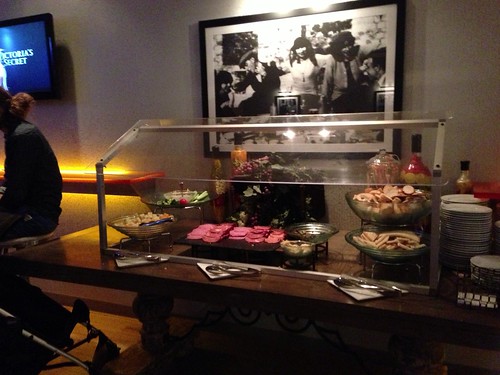 Ok, so I won’t lie. I am a cheap drunk. Just kidding. But, Brian and I had two drink tickets each to spend at the Managers Reception at the hotel each night. So, since it was RIGHT before dinner I thought… why don’t we just go down to the Managers Reception and have a couple of drinks then walk on over to dinner and we’re set! LOL! Yeah, I’m a dork, I know. So, I had my two glasses of wine and a few bites to eat from their lovely spread of food and we walked on over to Weber Grill for dinner. I then had WATER with dinner since the free wine from the hotel was just enough to carry me through dinner. Ha! It was funny, because on our way down the elevator, a guy with a pregnant wife was trying to give us away ALL of his drink tickets. I was like, ummm, no, no… I can’t drink more than the 2 they gave me! I even think we just got soda the last night. 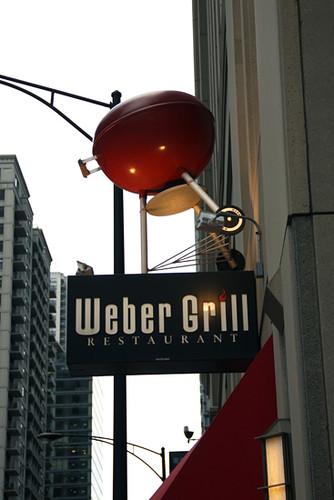 And here is a photo of the outside of the Weber Grill and my porkchop with mashed sweet potatoes. It was really good! Especially with that pre-dinner wine! LOL! I sort of wish I had ordered steak, though… but, the pork chop was good! It was my second time there… it is hard to believe it has been 10 years since I dined there. After dinner we went to bed early to prepare for our upcoming half day bike and dine tour the very next day! Stay tuned for that!