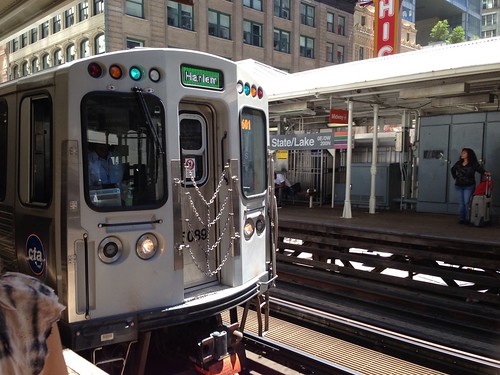 After our Disney vacation and quite a busy staycation (whew!), I decided that on our Chicago trip I would plan only ONE thing a day and leave the rest of the day free (ok, on one of the days I planned two things, oops!). This gave us a lot of time to explore the city, relax at the hotel, take some naps, etc. It was great!!! So, on the first day we took a 7:40 a.m. flight and arrived in Chicago at 8:40 a.m., then we decided instead of taking a cab we would ride their fabulous subway system, the ‘L’ to our hotel! We then rolled our suitcases 3 blocks over to our hotel, it wasn’t too bad and it gave us an opportunity to be the 3 Day CTA passes, which for two of those it was the same price a cab would have been one way from Midway to our hotel! 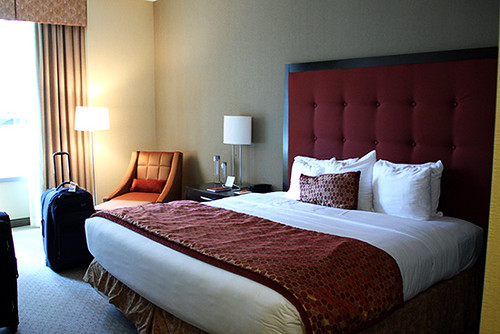 I really wanted to try a boutique hotel instead of a big chain hotel for once in Chicago. I have heard this is sort of the new trend… so, I did a lot of research and decided upon The Amalfi Hotel. We really loved this hotel and I would totally stay here again. First off, they serve breakfast on each floor in front of the elevators every morning… they had danishes, donuts, bagels, cereal, croissants, cheese sticks, hard boiled eggs, juices, coffee, etc. They also had a Managers Reception every night from 5-8 p.m. and we each got 2 free drink tickets for alcoholic or non-alcoholic drinks. They had two specialty cocktails each night, beer, wine or just any cocktail you wanted to be served. Along with the drinks they had a huge appetizer table set up with veggies, cold cuts of meat, bruschetta and hummus spreads, fruit, etc. They restocked our toiletries with Aveda products every morning and the bed was SO comfy! There was a refrigerator in our room and you could buy snacks at an additional cost. The location wasn’t right off of Michigan Avenue, but we could walk to EVERYTHING… we did take the L to Wrigley Field and Frank Lloyd Wright’s home, but that was it! I highly recommend this place! 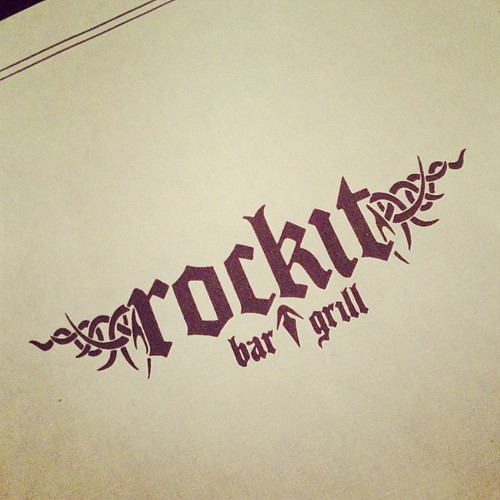 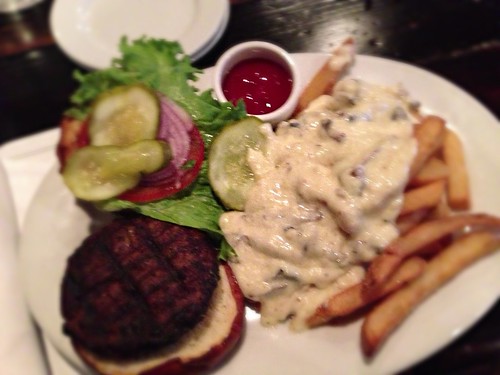 Our hotel let us check in WAY early at 9:20 a.m. and then suggested some places to us for lunch. We decided to rest up in our room and then we headed out at 11:00 a.m. to eat at the Rockit Bar & Grill. This place was serving brunch on Saturday till 4:00 p.m. (is this a Chicago thing? As other restaurants were too!), but they had a small regular lunch menu. I was craving a burger and I got fries covered in brie and shrooms. They were so good! But, I wish I had ordered brunch after I saw them bring out trays of breakfast foods to the other tables and they had a create your own bloody mary special. 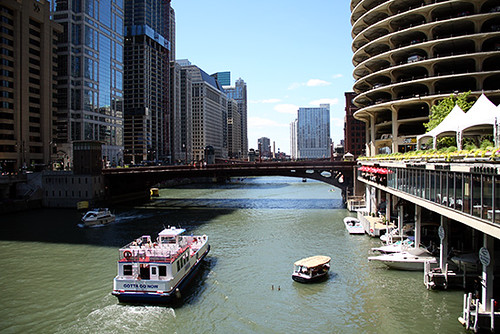 After lunch, we headed back to the hotel for a bit and then walked back to the L to take it over to Oak Park where we would get off to see the Frank Lloyd Wright home and studios. 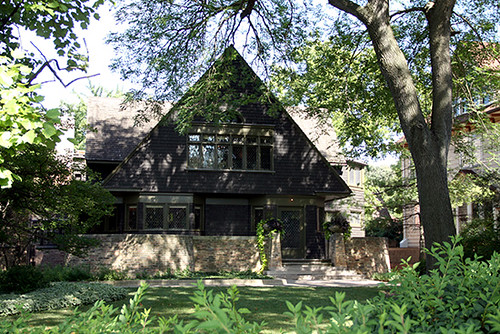 Here is the front of Frank Lloyd Wright’s home. I can’t believe I got a photo of it with no one standing in front of it! I really lucked out on this as there were people standing in front of it at several times when I went over to try to get a photo… I just had to sneak over there when none of the tours were going in or letting out! I’m clever! haha! 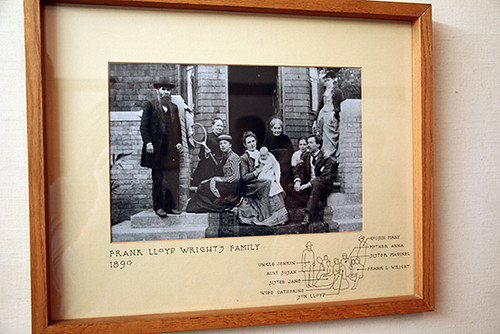 I have loved Frank Lloyd Wright ever since I took American Architecture in college. It is on my Mondo Beyondo list to see the Falling Waters house in Pennsylvania someday. But, I have also been itching to see his home and studio near Chicago for quite some time. This was Frank Lloyd Wright’s first house that he built for his family. Here is a family photo, he had 6 kids with his wife and they raised them in this moderately sized home! 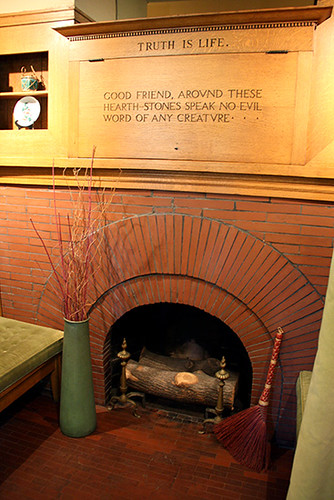 I took some photos of the house, but I was rushed when I took them since we were in a group and since they are ‘indoor’ photos… they aren’t the best. This photo was taken in the living room, he had a really neat enclosed area with benches on each side of the fire place. 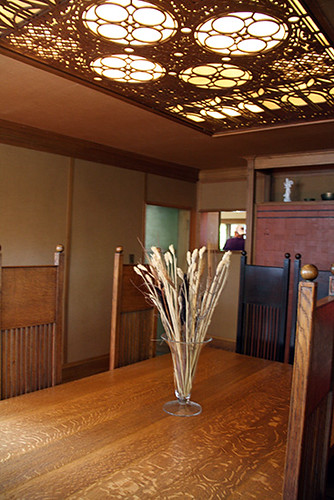 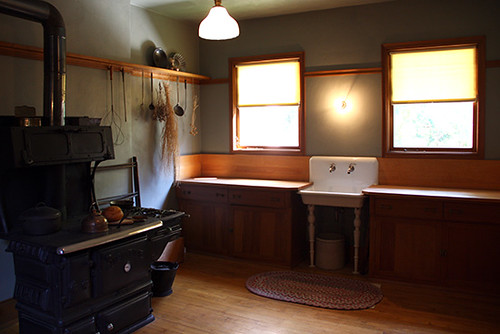 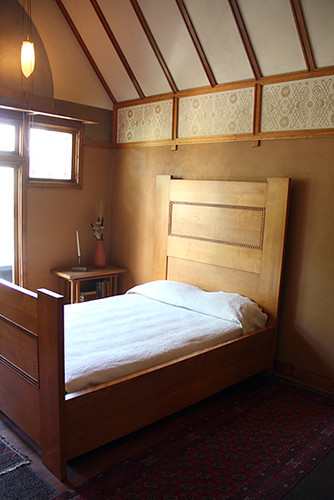 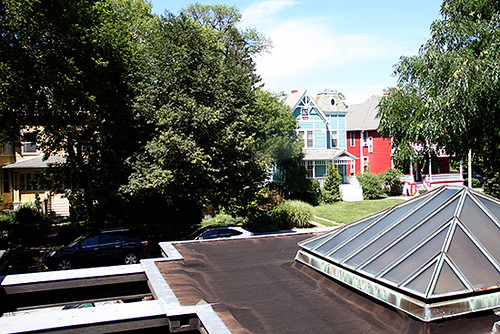 The bedroom was simple and had a view out on the main street. Clothes hangers weren’t invented yet and the clothes were hung on pegs. 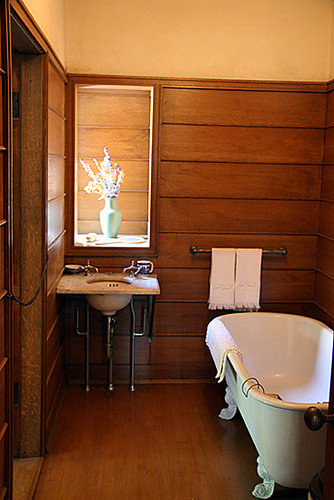 The Master Bath had two doors, so that a guest or the children could enter it from the hallway and use it, too. 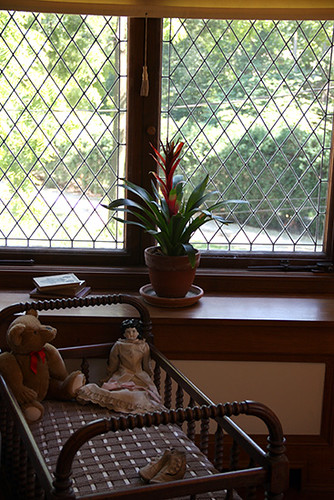 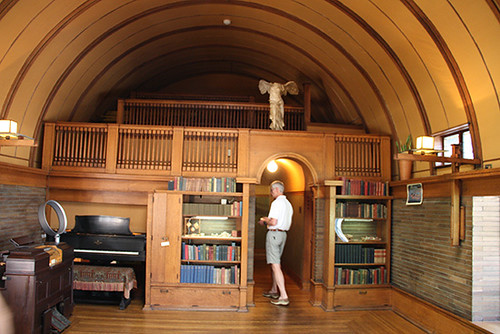 Wright and his wife were social people and would invite guests over to their home and they would socialize on the top floor. There was fire place, piano and in this photo you’ll see that there was several rows of seating up higher. Wright’s children would put on plays in here or he would have guests play music or even through neighborhood meetings in this space. Notice the The Winged Victory of Samothrace replica on the top, Brian and I loved seeing this as we have one about this size in our basement! What can I say? You can find everything at Homegoods! 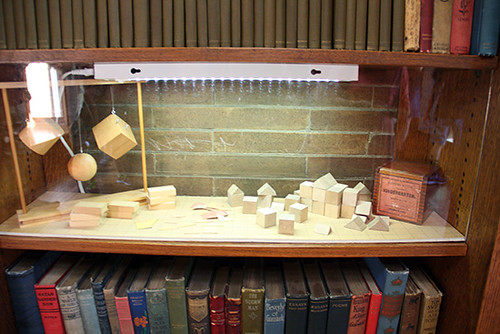 Froebel gifts were small blocks and planes that Wright’s mother purchased for him when he was 9 and he claims this was the foundation that helped him build his knowledge and love in architecture. It was also interesting to find out that one of Wright’s sons invented the Lincoln Logs toys. 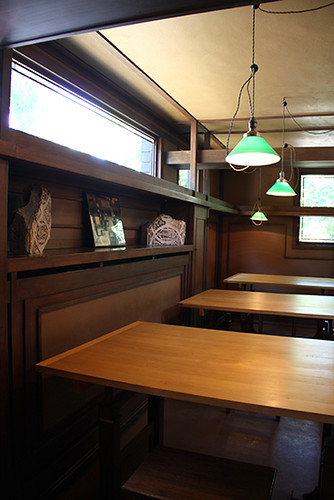 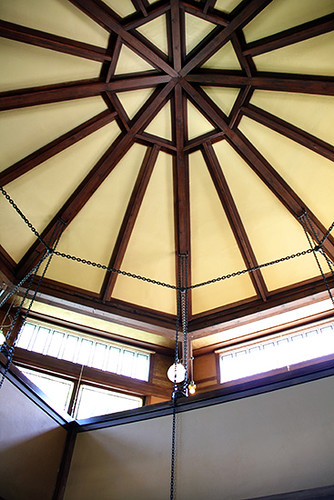 We then were lead outside to another building which was Wright’s office and studio. This building had a beautiful ceiling that is help up by the chains that run along it. You can compare it to standing in a circle with a group of friends and locking your arms around each other, this is how the ceiling stays up without caving in. Wright would have other architects work with him in this space and he invited artists to work up top where the lighting was more suiting. 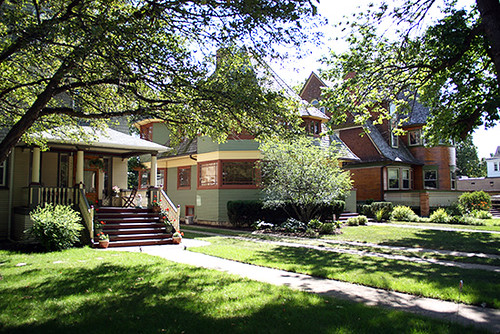 After the tour of the home and studios, we signed up for the audio tour which led us around the neighborhood to see 20 more homes that Wright and other architectures designed. 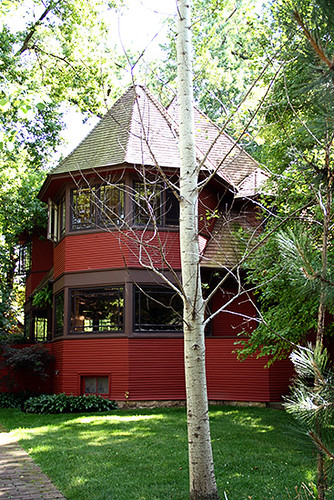 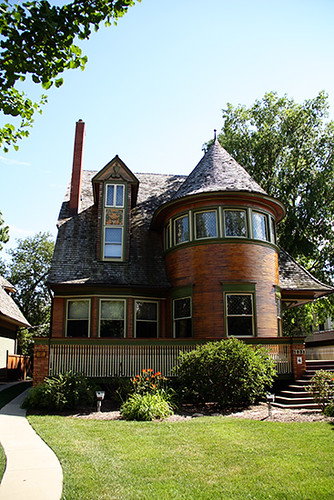 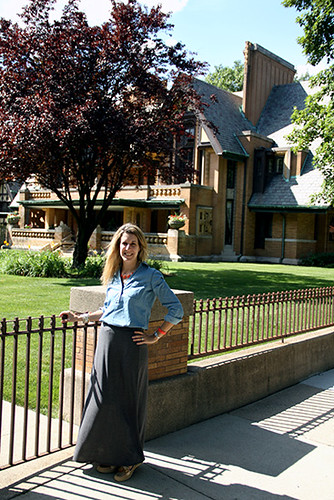 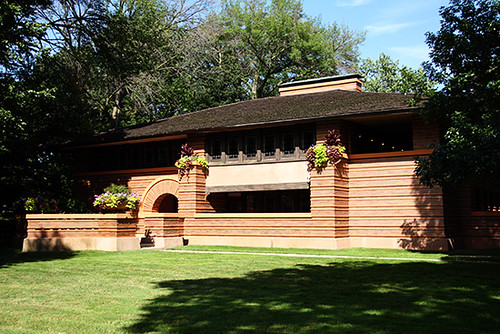 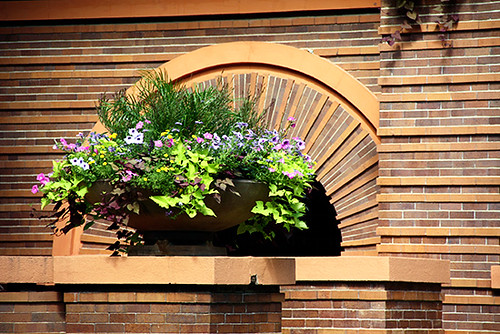 Arthur B. Heurtley House. 1902, Frank Lloyd Wright. 318 Forest Ave. Here is a closeup of one of the huge pots of flowers and you can see the beautiful detail on the brick work. 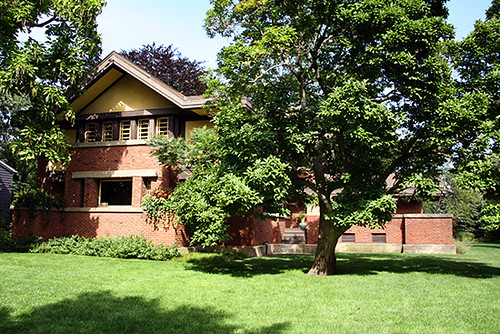 Peter A. Beachy House. 1906, Frank Lloyd Wright. 210 Forset Ave. You can’t see in this photo, but the window frames are a beautiful yellow color.