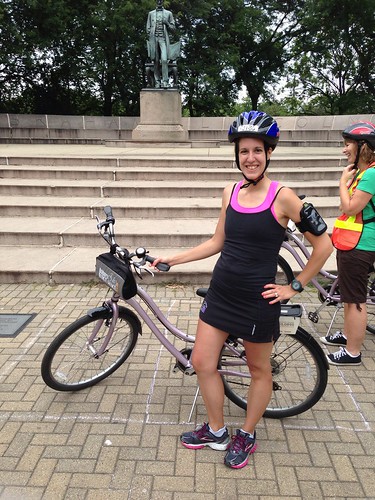 On our second day in Chicago, we had reservations to go on a FOUR hour long bike ride with stops for a slice of pizza, cupcake, hot dog and beer with Bobby’s Biking Tours! They say you burn 1,300 calories on this tour and you eat 1,600… not bad! I was SO nervous, wondering what I had signed us up for… but, I LOVED it. I hadn’t biked since high school annnnd I have never biked on busy streets before… nor have I ever biked in a big city like Chicago. If you are ever in Chicago and what to have a good time, this is it! 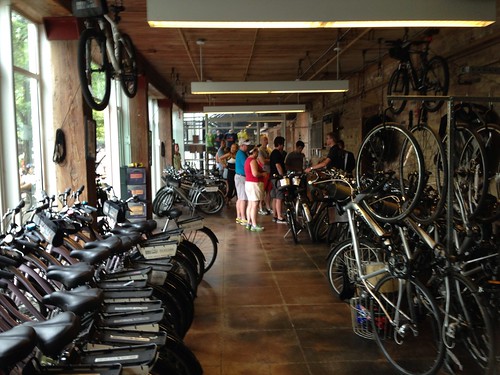 Upon arrival in the shop, we were told to use the restroom and fit ourselves for a helmet. 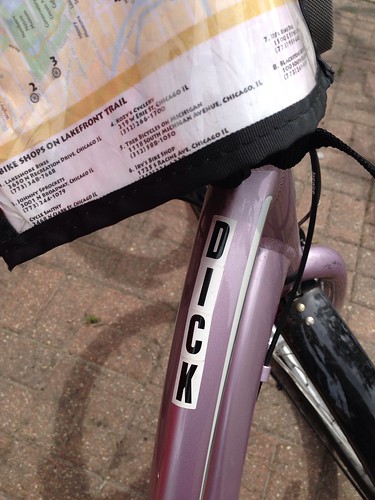 They selected our bike for us… Which… it was kind of funny, because I got stuck with Dick. YEP. My bike’s name was Dick. Brian’s bike’s name was Annie. Then our tour guide asked who wanted to wear vests and be in the back of our line. I wanted to be in the back, but not the very back! Luckily, two Canadians in our group volunteered… whew! We were told to take up an ENTIRE lane of traffic and to stay together like a school of fish, so no cars would try to get ‘in between’ us. Our instructor stayed the furthest left out from all of us and he would tell us when to stop and go at lights or stop signs. 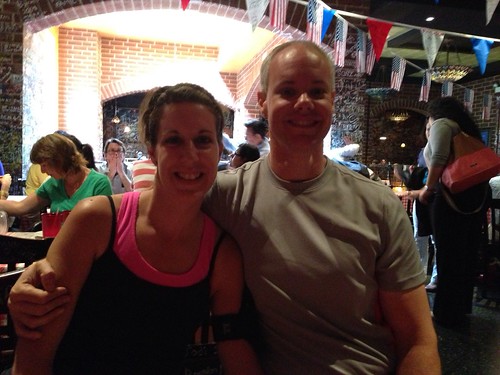 The first stop was at Gino’s East, a Chicago pizza place with writing ALL over the walls. A girl scout troop had even written on a framed photograph of the president. I think I was a little nervous at getting the swing of things on the bike and with keeping up with our group… so, I didn’t even photograph the outside of the first place we went to, or of the pizza we ate! Very unusual for me! We sat at a large table and got acquainted with the others in our group. Two couples were from Canada, one couple was from Orlando and the other was two girls and the one was from Chicago and the other from Cincinnati. Most of them were in Chicago for Lalapalooza! We did have one of the couples take our photo! The Canadian couples were joking about how they had no insurance in the states and how bad it would have been if the Mercedes car that was honking and cursing at us would have hit them. I am not a biker, but it amazed me at how rude some drivers are to bikers! Especially bikers touring in a group! 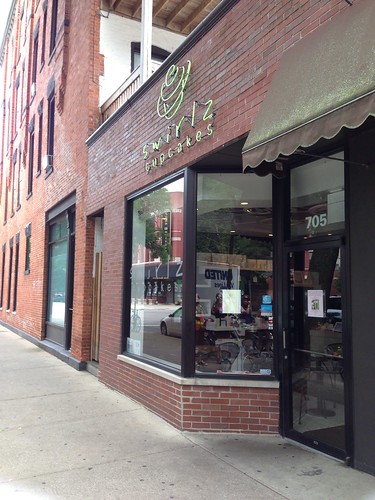 Now, I didn’t take any photos while biking, heck I couldn’t even do the arm signals to motion left or right, because I’d lose balance on the bike! But, I did keep up with the group and I was proud of that… but, all of these photos will be of our stops, of course! So, the next top was for cupcakes at Swirlz Cupcakes. YUM! 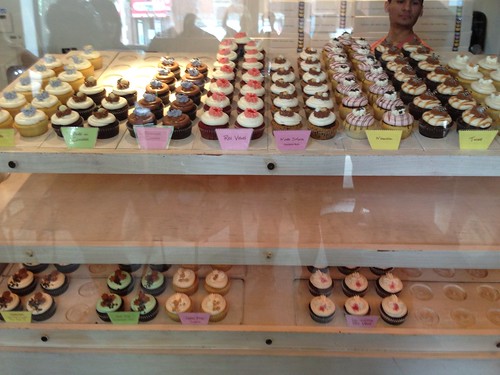 Look at all of these yummy cupcakes to choose from… 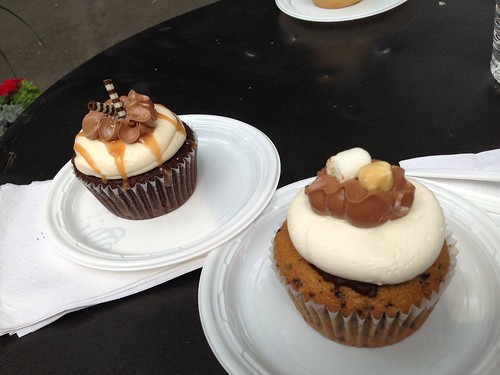 Brian ordered the Twixie and I had the Nutella S’mores. Mine is pictured on the left with a tiny marshmallow on top. Brian and I agreed that these cupcakes were really good, but… we must be Jilly’s snobs, heck… they DID win the Cupcake Wars. But, these cupcakes were def. above average, a nice size and very pretty. 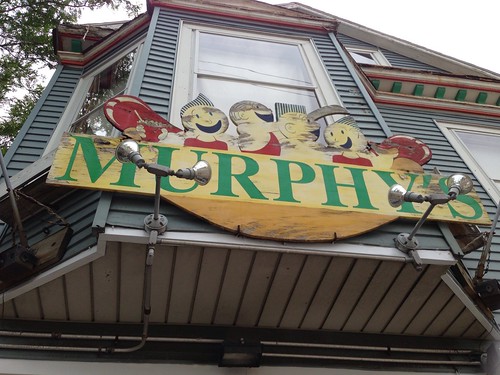 By the time we stopped for Chicago dogs, I had brushed the cob webs away and was a pro at biking! We stopped at a place called Murphy Red Hots and they had all of the Chicago toppings you’d want for that perfect hot dog. 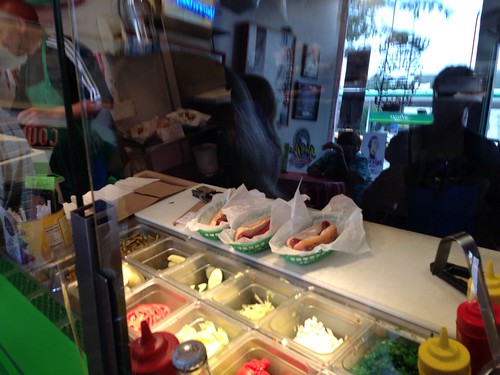 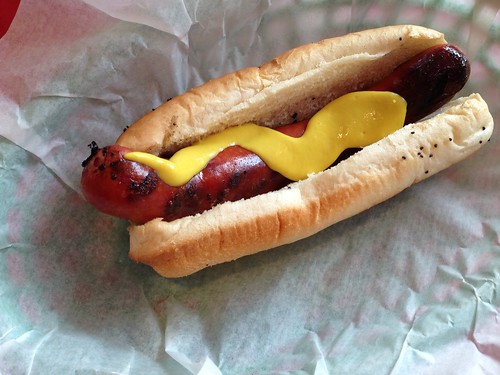 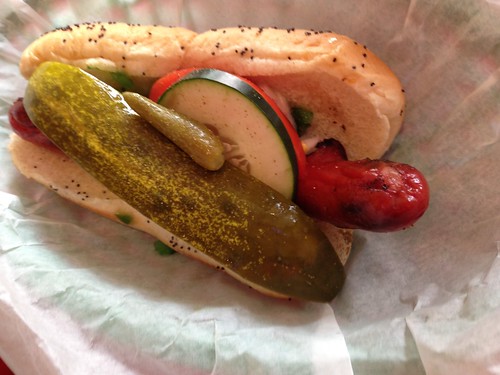 Here is Brian’s dog- he went true Chicago style… I went, boring Carrie style. Hey, everyone to their own. Regardless, it was a good dog! 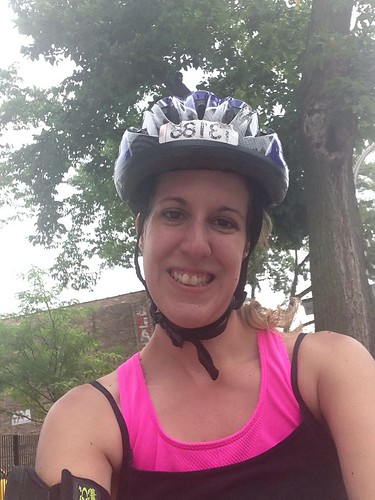 And, after having a slice of pizza, a cupcake and a dog, I was just proud of myself for keeping it all down to bike for another two hours! 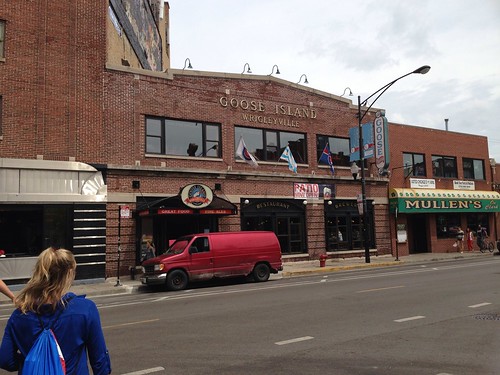 After that, we did some more biking in the city… and, that is when the beer part of the tour started. I thought we would stop at one bar, but ohhh… no, two! The first bar was Goose Island Brewery in Wrigleyville and it was across from Wrigley Field (of course!)! Did you know Goose Island is the only island in the Chicago river? 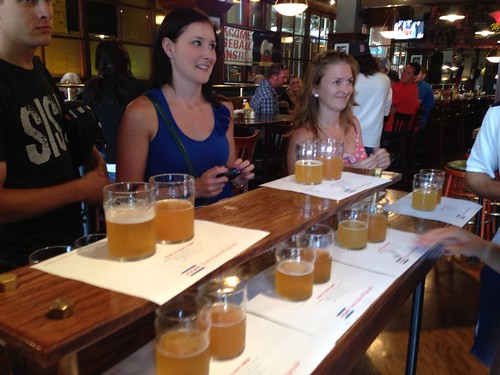 Our beer samples were waiting for us as soon as we arrived. 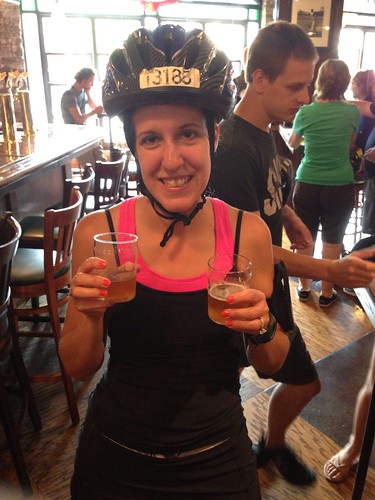 Biking and guzzling beers? That might be a bit scary. Just… given my biking skills. But, our tour started on trails after this and I did ok. They were very small glasses! 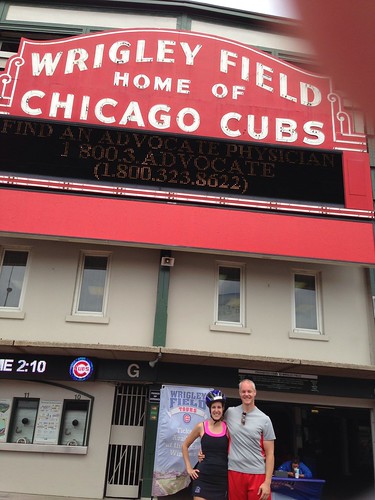 We stopped for a photo in front of Wrigley Field. 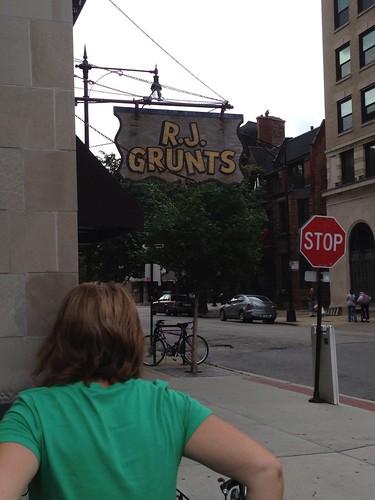 Then, another beer stop at R. J. Grunts. 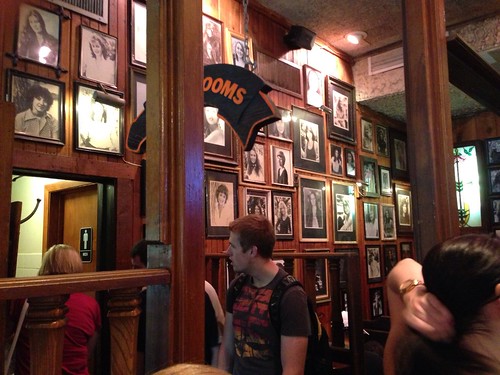 R. J. Grunts hangs a photo of every worker they’ve ever had in the restaurant. 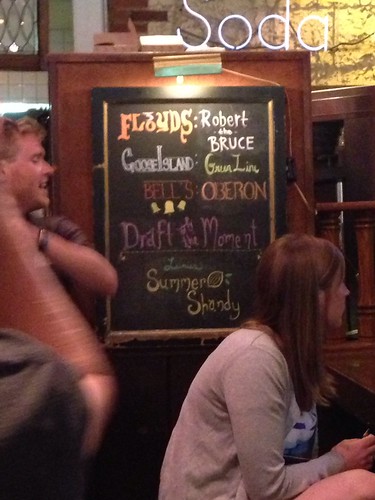 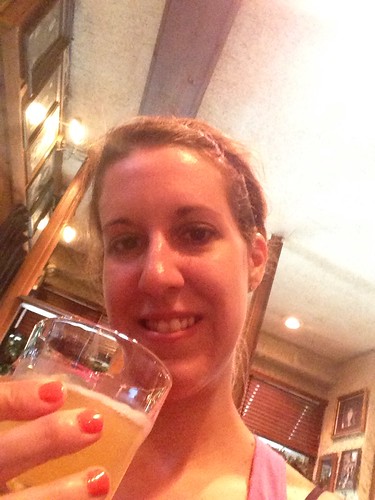 At this bar, we got to select our beer off a menu. Brian and I selected the Summer Shandy. It was nice and refreshing. Ahhh. 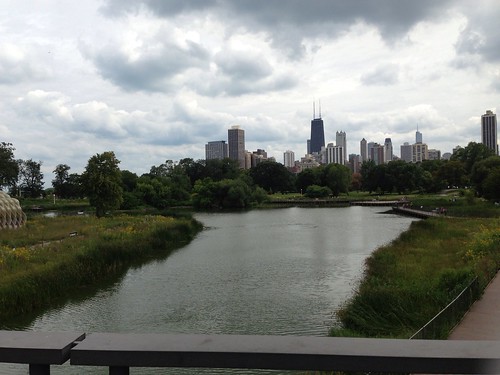 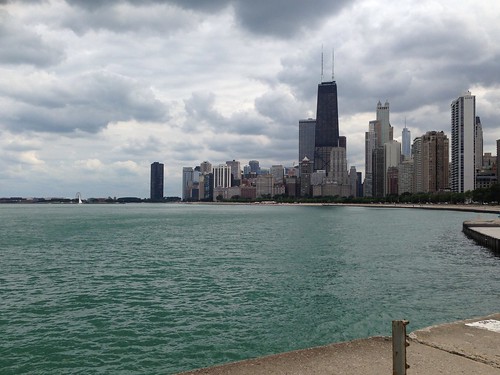 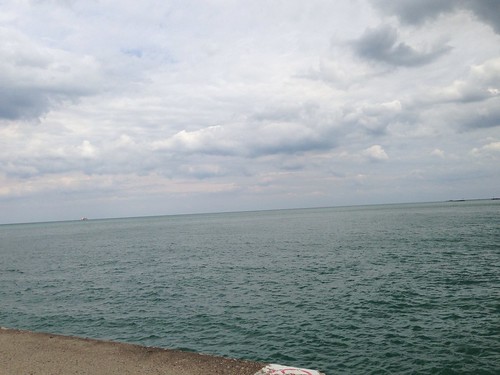 We biked past the Lincoln Zoo (we didn’t stop for photos, boo!), Grant Park and Oak Park Beach. It was the most GORGEOUS bike ride ever… the weather predicted rain all day, but we had beautiful temps and no humidity or rain. 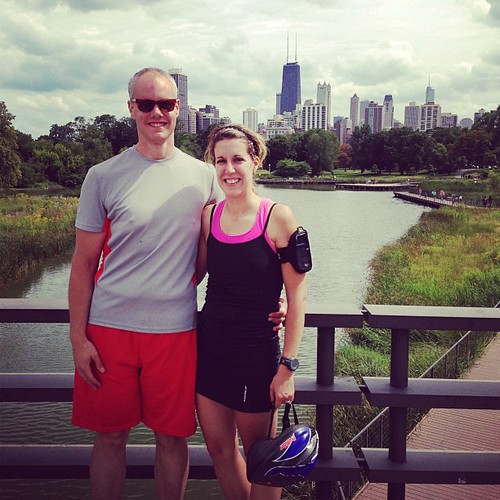 And, at the end of this 4 hour bike ride… I felt like Superwoman! Yeahhh! It is so fun to push yourself into unfamiliar territory and I try to do that every now and then. Brian and I are thinking of getting each other bikes for our wedding anniversary in October, I really think I could get hooked on biking. 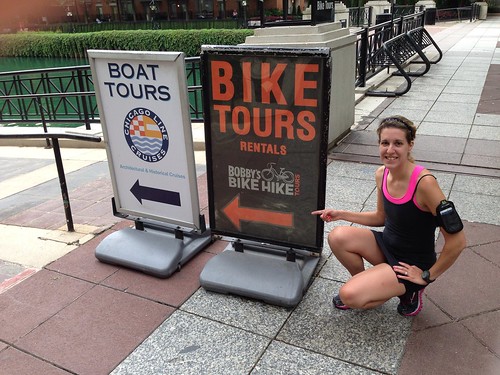 If you’re in Chicago, check them out… Bobby’s Bike Tours!