Wow! It is so good to be back to blogging. I told my husband it felt weird to not be working on my blog in the evening after the kids went to bed. So, what did I do? I read an entire book in the last week and a half instead of blogging (The Nightingale). It was refreshing and just what I needed… and, I did do a little blogging… but, mostly reading and having my husband take outfit photos. lol 🙂

So… 2015. Yeah… 2015 was not my favorite year. Not the worst (that would be 2011), but… it was… meh. 2014 was AWESOME, so 2015 fell short. I will say that my blog did AH-mazing in 2015, we had a GREAT Disney trip and I feel a lot closer to God through daily prayer. But, 2015 was stressful and filled with some of the worst and relentless sickness we’ve had… ER visits. Anxiety for me. And, my poor mom was recovering from her car accident for several months this year. Nothing wonderful stands out about 2015. And, I hate that. It makes me feel like I’m not living my life to the max.

So, everyone has been talking about their 2016 goals, or their key word for 2016. I usually do numerous goals for the year, but this year I wanted to keep things ‘light’ and I decided I wanted to do monthly goals instead. I think monthly goals are easier for me. I also feel like I’ve accomplished something when I knock it out quickly.

I think I’ve mentioned this before, but my absolute favorite blog is Shay’s Mix and Match Family. Shay is just such an inspiration to me. She has been doing monthly goals for about half a year now? Maybe longer? And, she is the one that inspired me to do my own monthly goals (see one of her monthly goal posts HERE! I love how she jots her goals down on a scrap piece of paper and I plan to do that, too. I think physically writing these goals down will help seal the deal. 🙂

So, here are my Goals for the Month of January!! 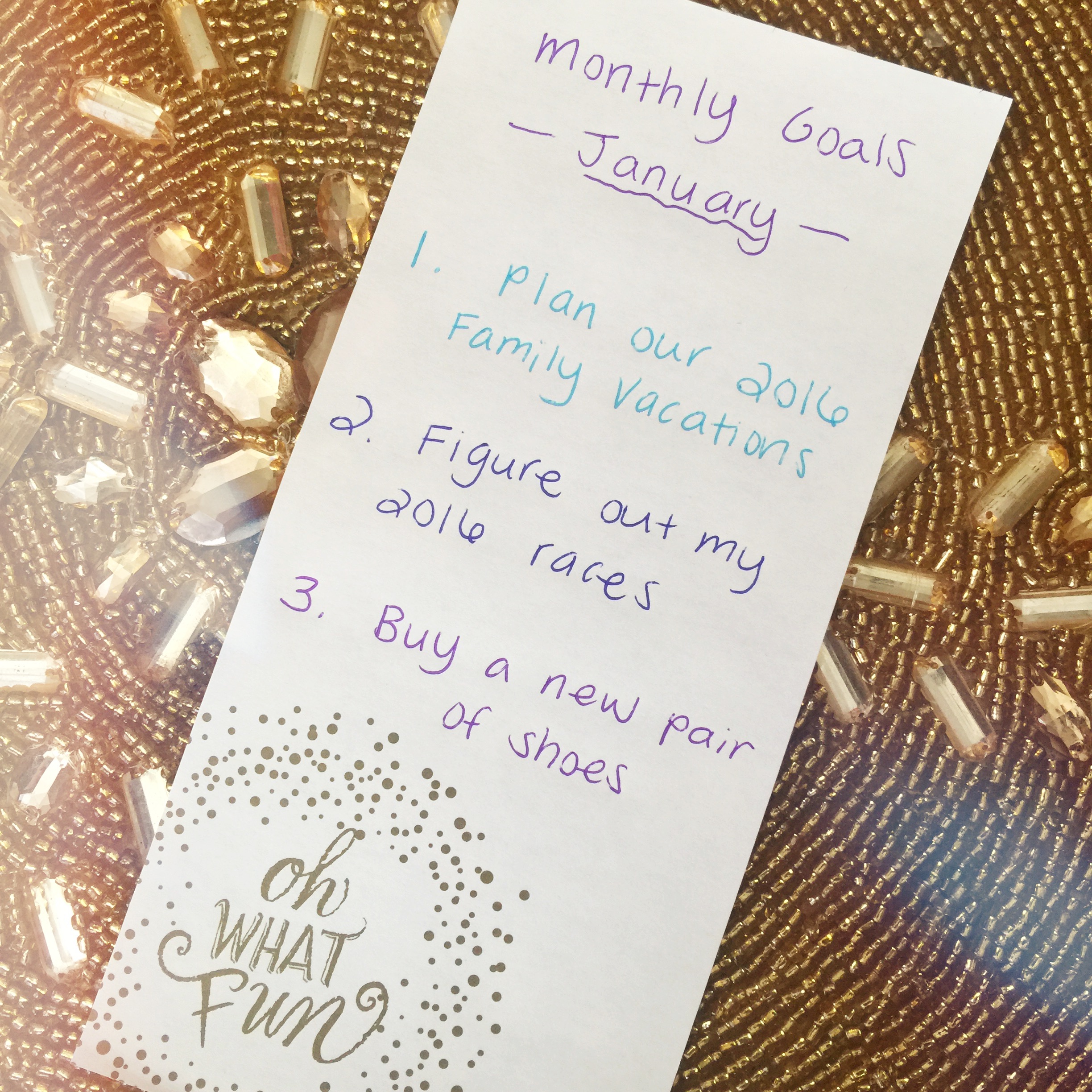 1. Family – I need to start planning our 2016 vacations. We usually do a Great Wolf Lodge 2 night trip with the kids during the winter, but last winter 2 out of 4 of us was sick and a snow storm almost trapped us in Kansas City. SO, it may become a Spring break trip.

Brian and I are also wanting to travel abroad again. We went to Paris in 2012 and we really want to do Italy next. This would be a trip we would do while the kids are on vacation with their dad and so it would leave us with just a week. We only spent a week in Paris and had plenty of time, so I think we can do Italy in a week. I just need to find a travel agent and to see if it is possible to fly into Venice and depart from Rome. Or, if we need to focus on ONE city. International travel always gives me the jitters, I am just a nervous traveler and so I have been dragging my feet on planning this trip. Deep breath.

We usually do Disney every other year with the kids and this is our off year. If Brian and I decide to do Italy, we want to still do a family vacation… but, something that is easier and less expensive. I was thinking maybe Branson and Silver Dollar City with the kids, they have never been and I haven’t been since I was 13. It is only a couple of hours away from St. Louis. It is one idea I have, the other is a trip to Chicago with the kids (flights are only 30 minutes and super cheap!).

2. Health – Figure out 2016 Races. I really need to figure out my races for 2016. I have been dragging my feet on running a full marathon for a few years now. I’ve been doing some research on training and I think I’ve found two great running groups that offer training for full marathons. I would to have a coach and others to run with, I think it would help me mentally to run with a team. The only problem is that I think I’ve missed the window for the Spring full that they have here in St. Louis. I didn’t realize that full training was 18 weeks out, whereas I only train 12 weeks out for my half marathons. So, I may run the half this year and really plan for the full in 2017. Another idea I had was entering the Chicago marathon lottery and trying to get in it for the fall. However, Brian usually leads the cub scout camp that weekend and I’m not sure I’d want to travel to Chicago without him (wuss alert). I really need to figure out a race for this full and a schedule or I will NEVER ever do it. Another possibility is the Disney full, but it is during the winter and its not the easiest time of the year to travel with the kids school going on. I really need to get a GAME PLAN on!

3. Guilty Pleasure (Me) – Buy a new pair of shoes. Most women have TONS and tons of shoes. Me? Not so much. A couple of years ago I realized I never wore bracelets, due to my tiny wrists. I went about changing that and I have some great arm candy I wear now. I have just not been feeling inspired by my shoes lately. So, I am going to treat myself to a new pair. Stay tuned for what I select. 🙂 I may even decide to buy a new pair of shoes every month in 2016… not all shoes are expensive and this could be a fun endeavor!

This is all I have planned for January. I thought about doing 5 goals each month, but I think 3 is PLENTY. Probably 1 is plenty! I am going to switch them up every month, so some months instead of Health I may do a Spiritual goal or even a Blogging goal. I just don’t want to take on more then I can chew… because, honestly… I don’t have a lot of time!

So, in February I will check in with how I did on these goals and I’ll have 3 NEW goals. Wish me luck 🙂