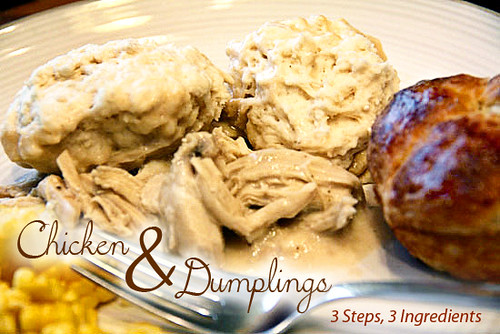 When Brian and I first started dating, one of the first things we would do on our dates is cook for each other. I asked him what his favorite meal was that his Momma used to make him and he told me chicken and dumplings. Now, I have always loved the chicken and dumplings at The Cracker Barrel, but I had never attempted to make them for myself or anyone else! So, I searched the web for a recipe similar to the one that Brian said his Mom used to make him. Where did I land up? Betty Crocker and simple Bisquick, of course! I have made this recipe for Brian twice now and recently my son Nathan asked me to make him chicken and dumplings, so I made it a third time. Its a good one and the best part about it is there is only three steps to it and three ingredients. How simple is that? 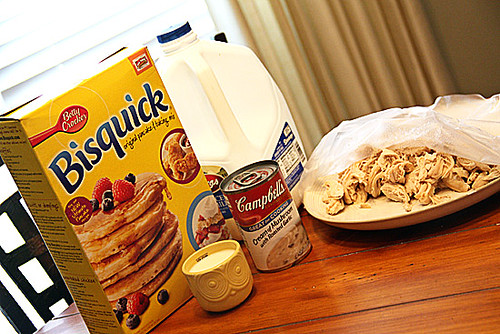 Ingredients: Bisquick, Condensed Mushroom Soup, Chicken and Milk. Ok, it is actually 4 ingredients… I forgot about the milk 🙂 (For the cooked chicken, I put 3 raw chicken breasts in a pot of boiling water for 30-45 minutes. Then, I took the chicken out and shredded it with a fork.) 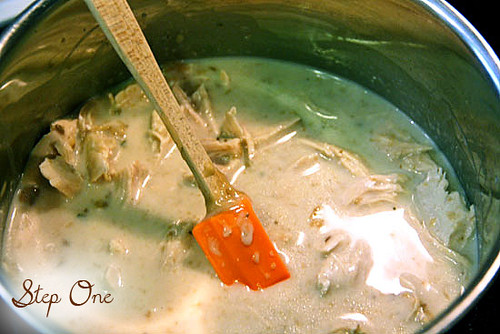 Step One: In a 3 quart pot, bring the chicken, 1.5 cups of milk and mushroom condensed soup to a boil. 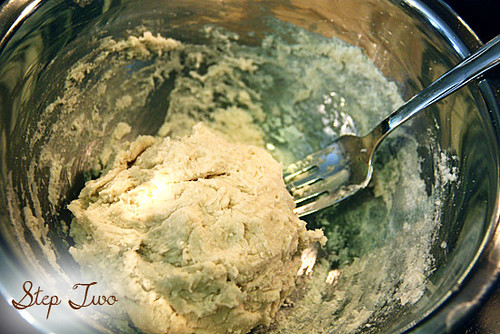 Step Two: Pour 1/3 cup of milk into 1 cup of Bisquick and mix until a soft dough forms. Roll into a ball and then split it into 8 smaller balls (dumplings) and place them on the top of the chicken/soup/milk mixture 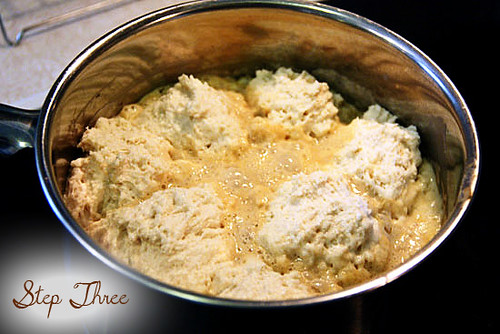 Step Three: Turn down to low and simmer for 10 minutes. 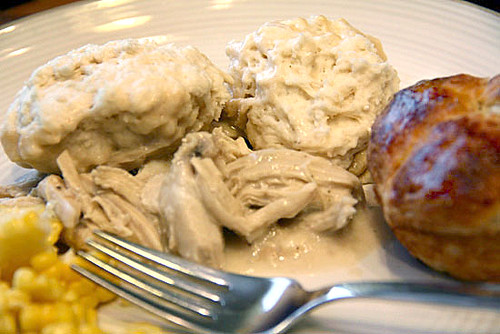 And, that is it! So easy, so delicious… Now, the Betty Crocker site has you add peas and carrots, but I didn’t want the kids to be freaked out by that (my kids can be VERY picky), so I just served fresh corn cut off the cob on the side. Brian also made rolls, because he likes any excuse to make bread! It was really a delicious dinner that both kids ate.. I call that a success!