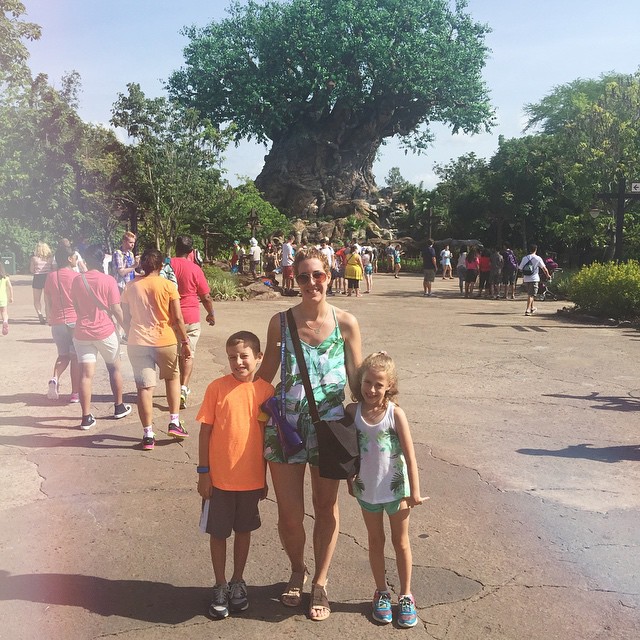 We did Animal Kingdom on our fourth day and it was HOT. I thought we would feel less tired after our rest day, but I felt like this day was the day we were all the most tired. This post will probably be the shortest, because since it was so hot and I was so tired… I didn’t take as many photos! Here is a photo of me and the kids by the Tree of Life.

Here are some other posts I have done from previous visits to Animal Kingdom Lodge: 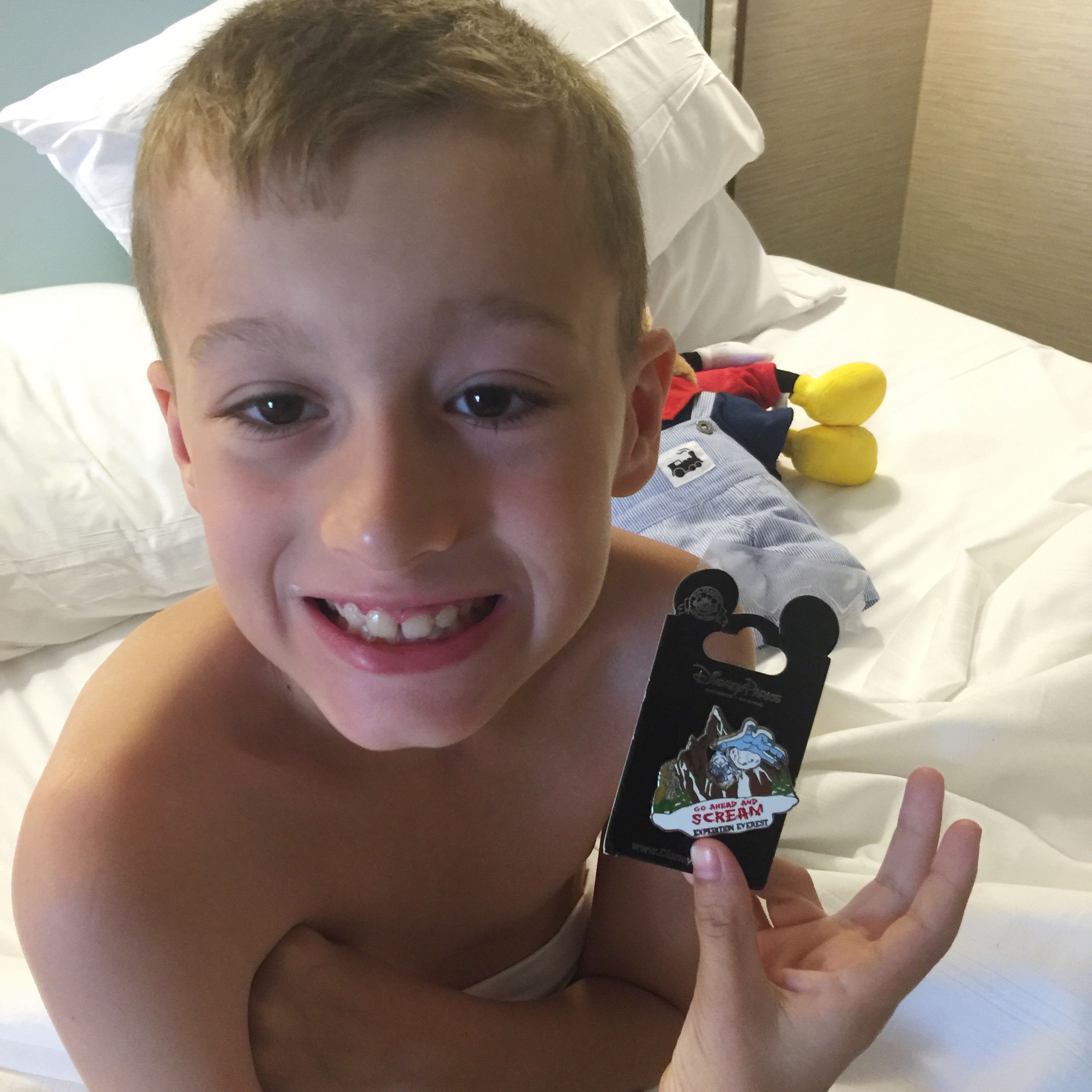 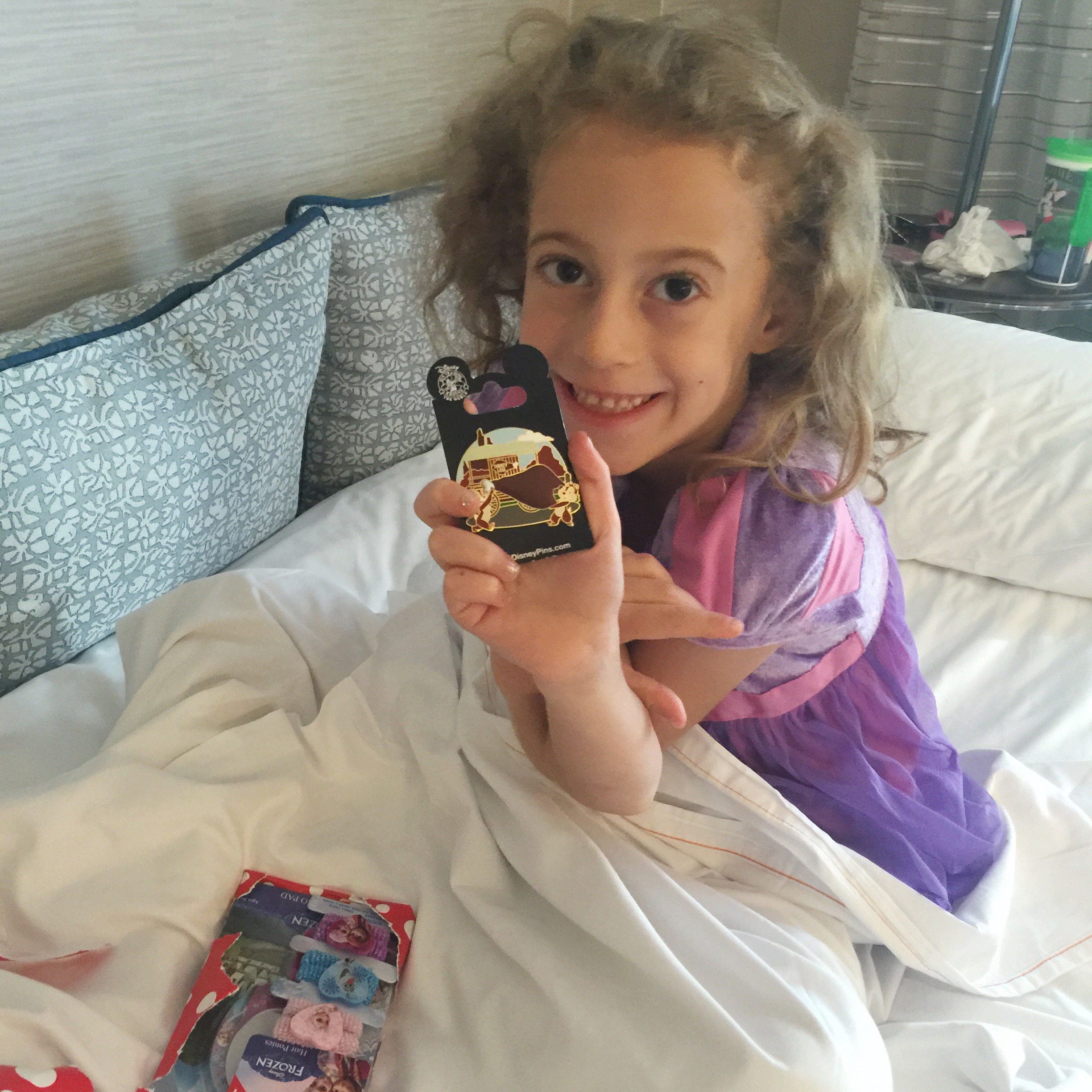 The morning before we headed to Animal Kingdom Lodge, the kids opened their Mickey Mail once again 🙂 I think when we go in 2 years from now (they will be 8 and 11), I will still surprise them with Mickey Mail! Who doesn’t love surprises?

Our first fast pass was for the Kilimanjaro Safari, which is one of my favorite rides in the park. On this ride, you are in an open-air vehicle on a bumpy ride where you get up-close to a lot of African animals such as elephants, tigers, hippos, giraffes, etc. 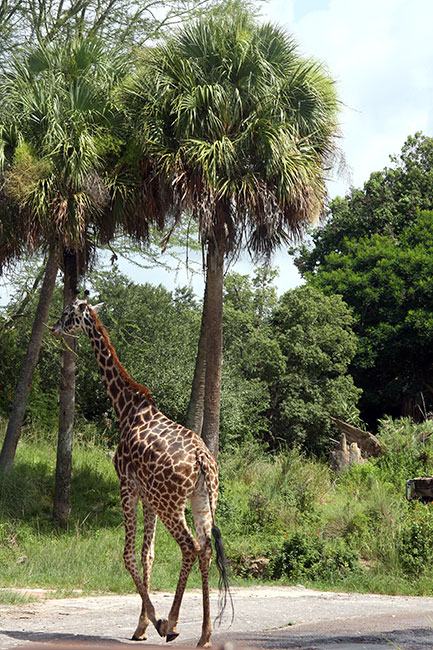 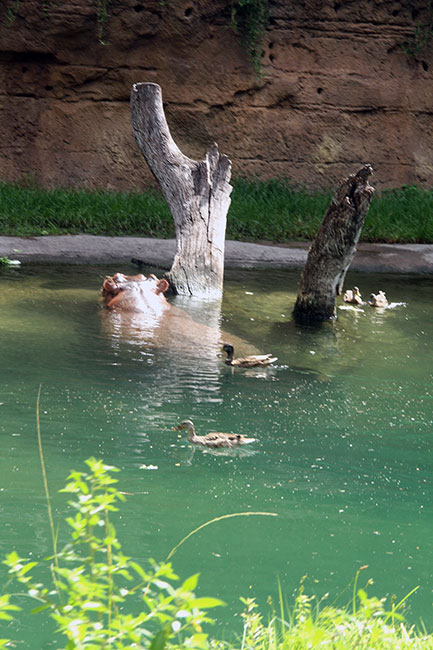 Sometimes I get really good photos on the safari and sometimes the animals don’t cooperate and I don’t. I would say I didn’t get the best photos this time around, but it is always fascinating to watch the animals even if you only get to see their back-side! 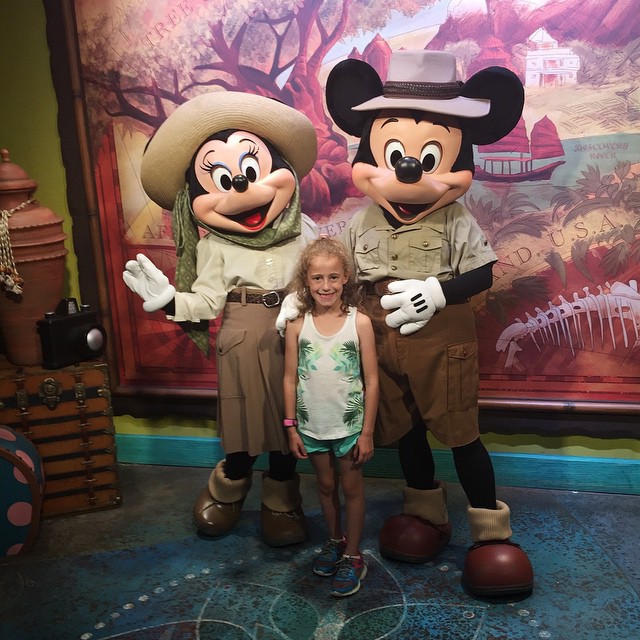 Autumn and I had a fast pass to see Mickey and Minnie at the New Adventurers Outpost in their safari clothes! Oh, did she love this and it was our first time getting their signatures at Animal Kingdom. 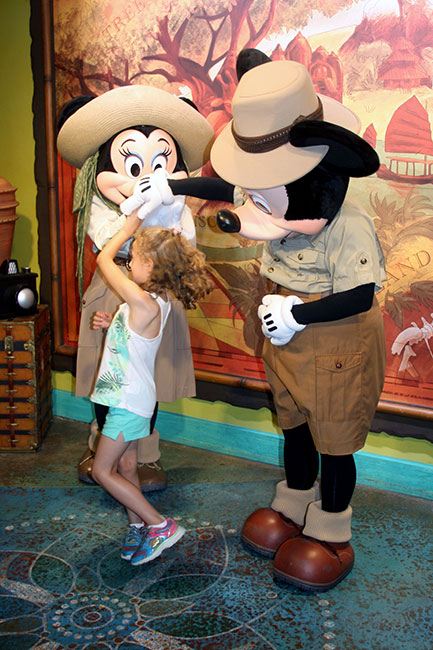 Mickey even swirled Autumn around, which she LOVED. 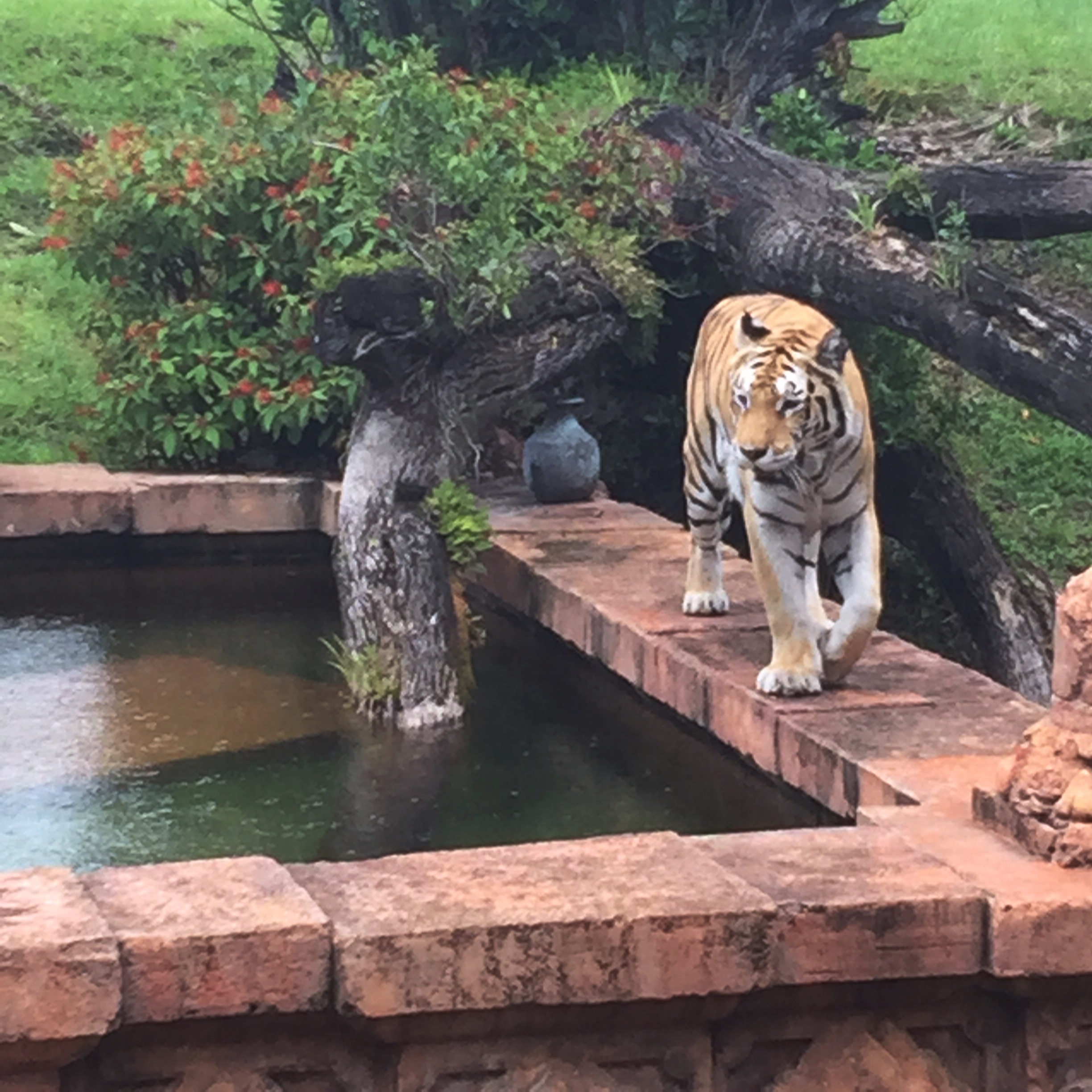 Brian and Nathan were doing their fast pass for Expedition Everest and were still busy after we got done with Mickey and Minnie (it only took 10 minutes, if that), so Autumn and I did the little nature walk (which was heavily shaded, whew!) at the Maharajah Jungle Trek. I highly recommend it, it is fantastic… they were cleaning the fruit bats area, so we didn’t get to see the bats… but, the two tigers were fascinating to watch and were really playful! 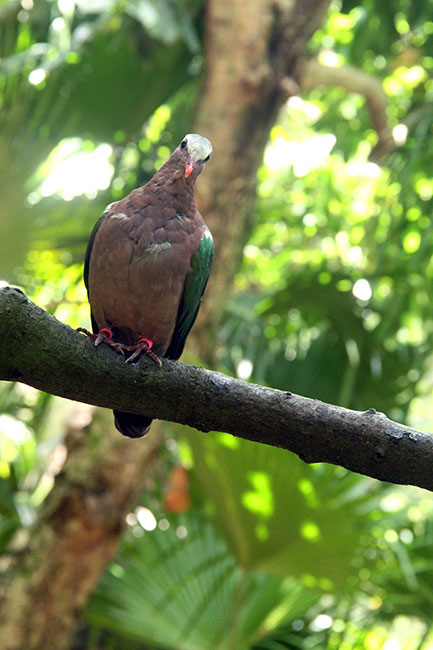 They also have a little bird area and this is where I got the photo of this bird (sorry, can’t remember what kind it is). 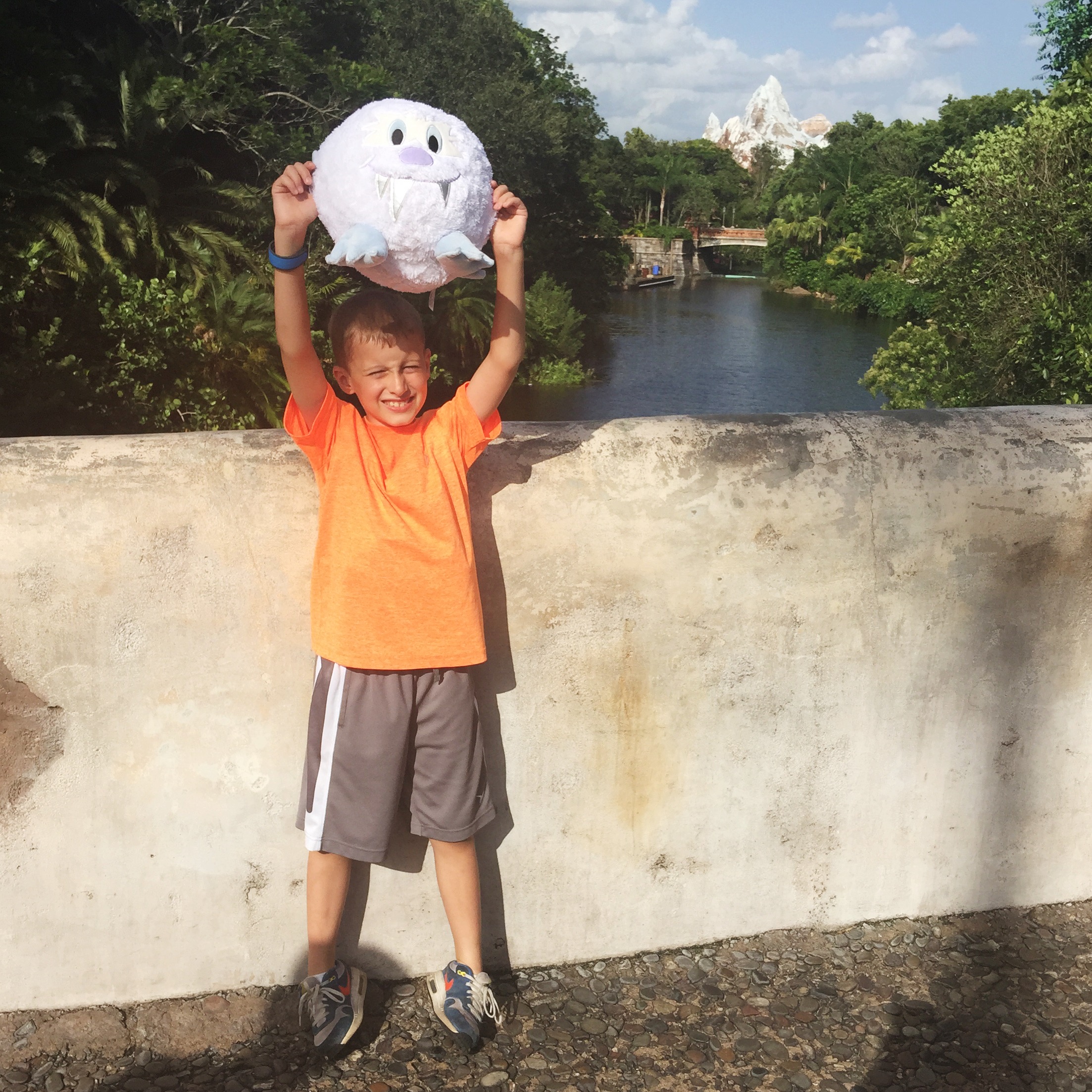 Nathan rode Expedition Everest for the second time!! I can’t BELIEVE he rode it two years ago for the first time when he was 6! Autumn would never dare step foot on it and she IS 6!

This is where we ate lunch at… and, I was enjoying the A/C so much that I didn’t even snap a picture of my food. Oh well, we all know what pizza looks like, right? 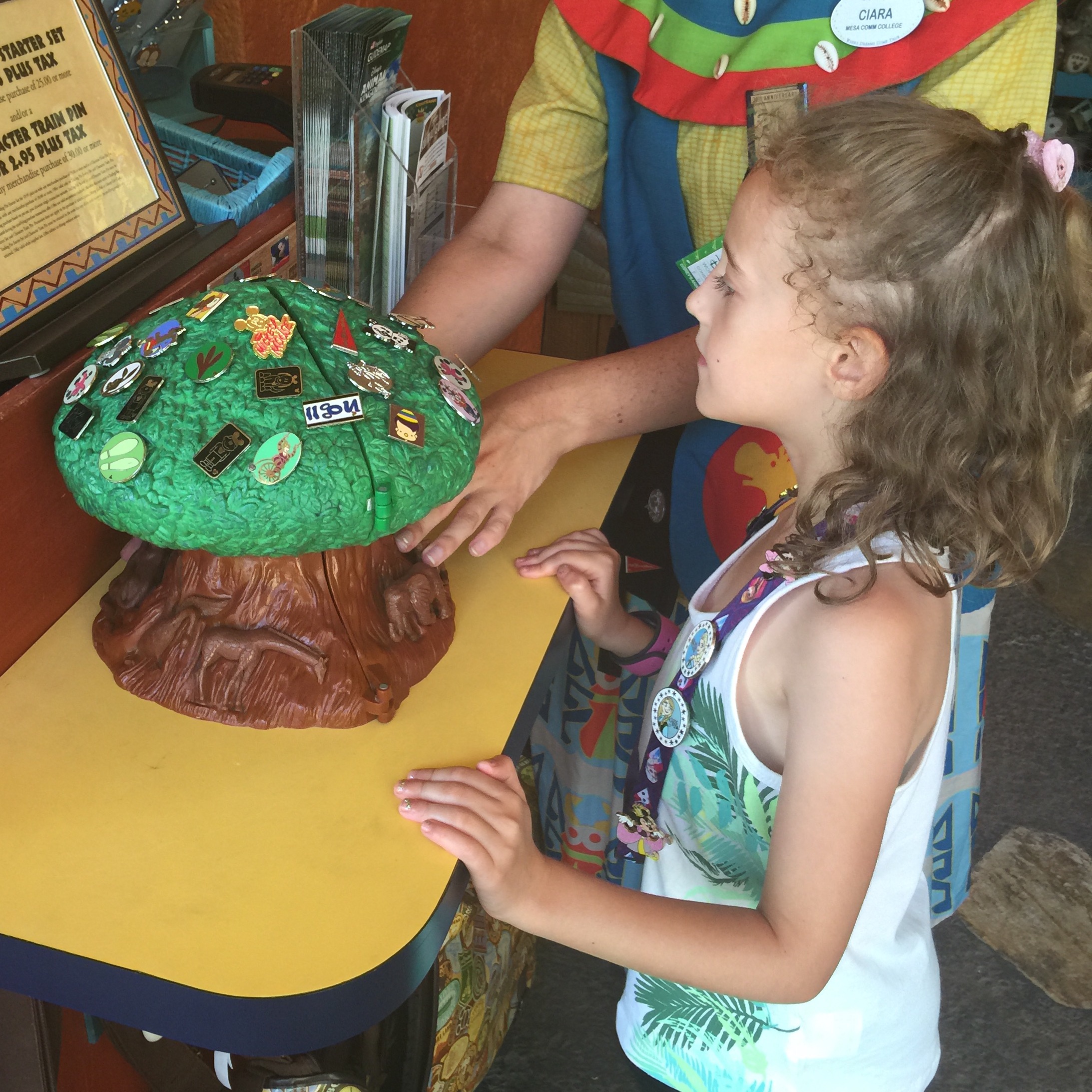 The kids were still very much into collecting pins on their fourth day at Disney. This Tree of Life was so neat with all of the pins on it! 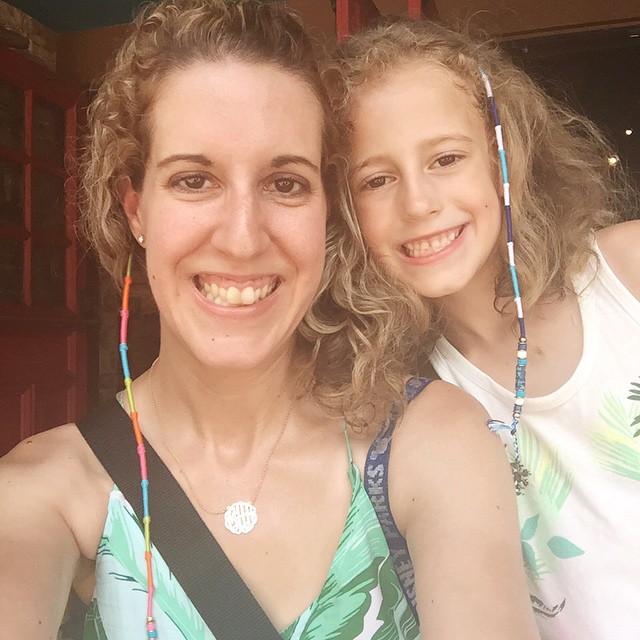 At the very end of the day, Autumn and I decided to get hair wraps together. It was such a fun mommy and daughter activity and we kept our wraps in for 3+ weeks after the Disney vacation. Autumn’s wrap is Frozen themed and mine is rainbow-colored. 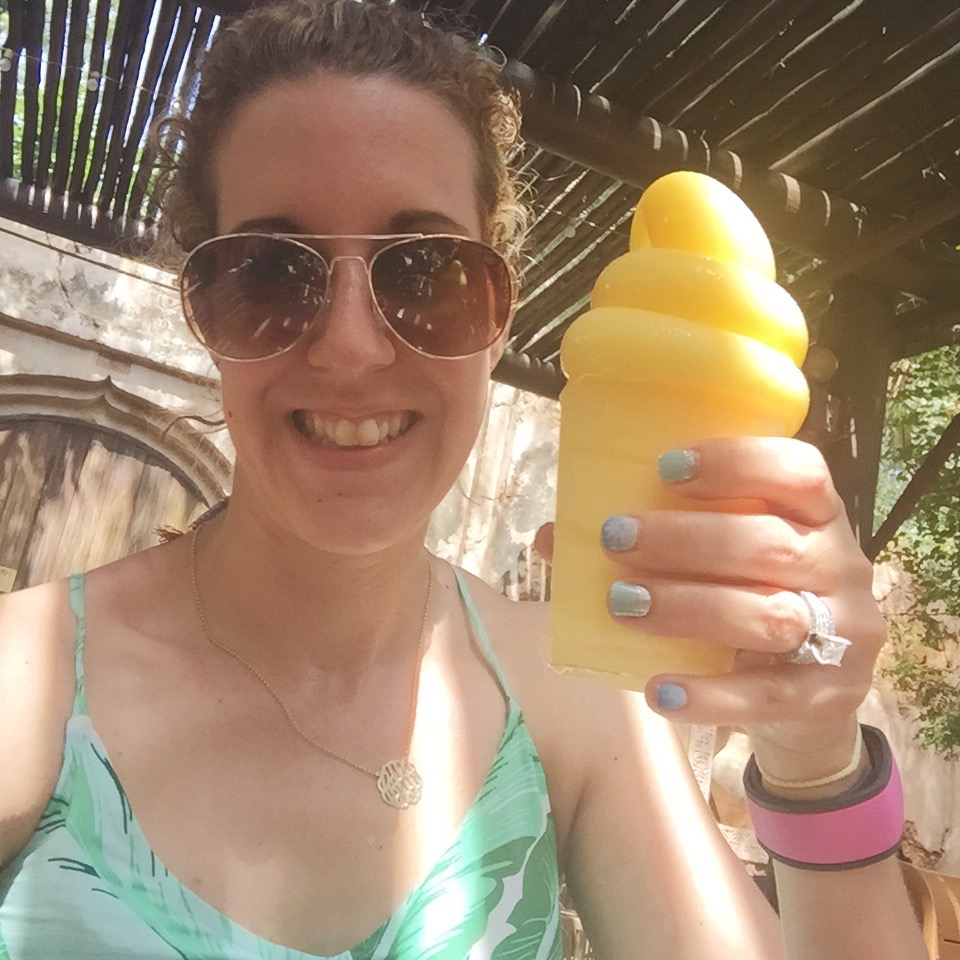 We decided to see the Lion King before heading out of Animal Kingdom for the day. I wanted to try the alcoholic (coconut rum) dole whip float at Tamu Tamu and it was definitely delicious! 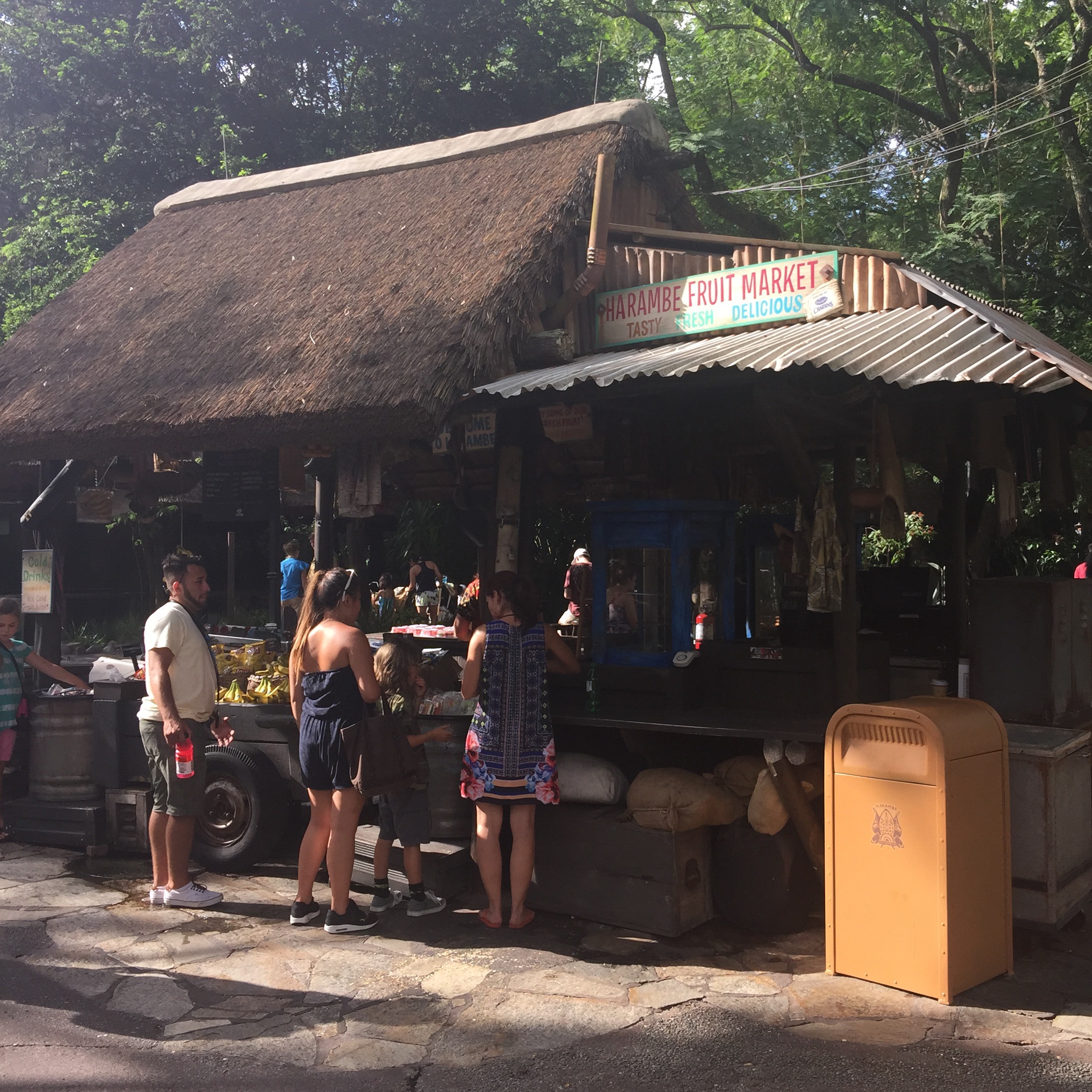 Before we left, I had to get some fresh pineapple at the Harambe Fruit Market. Always the FRESHEST pineapple ever! 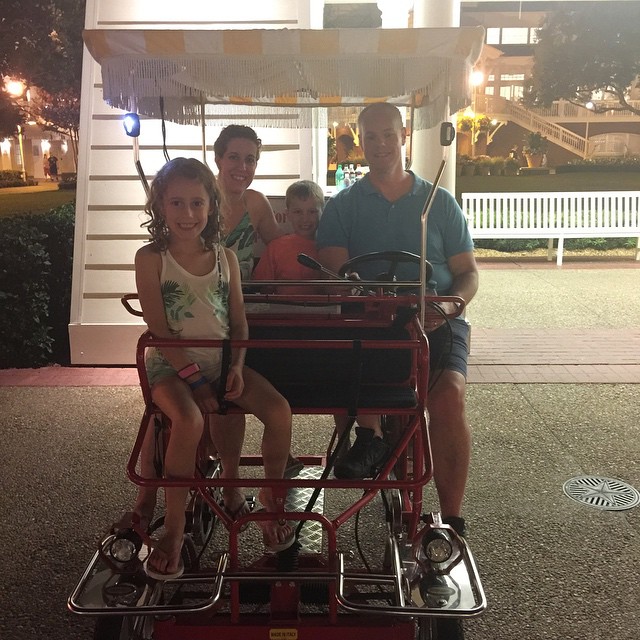 We did the craziest bike ride around Disney’s Boardwalk! At one point I got off to take pictures and Brian and the kids road off without me! Ha! Not funny!!! Nathan wanted to drive the bike, but he wasn’t old enough… so, Brian and I had to pedal! Some of the hills to the bridge going over the waterfront were pretty steep! We saw a few people get off their bikes to push, but not us! lol! 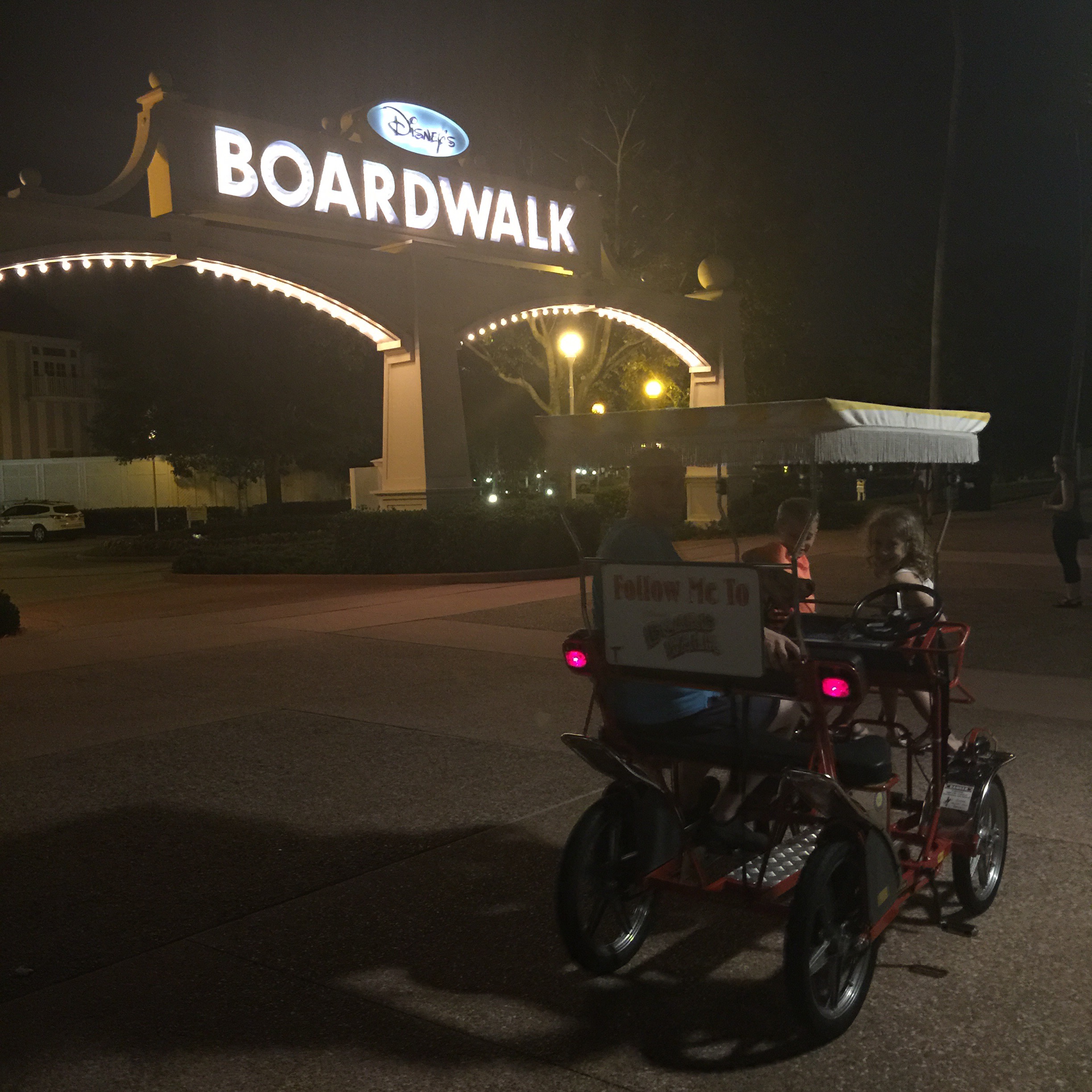 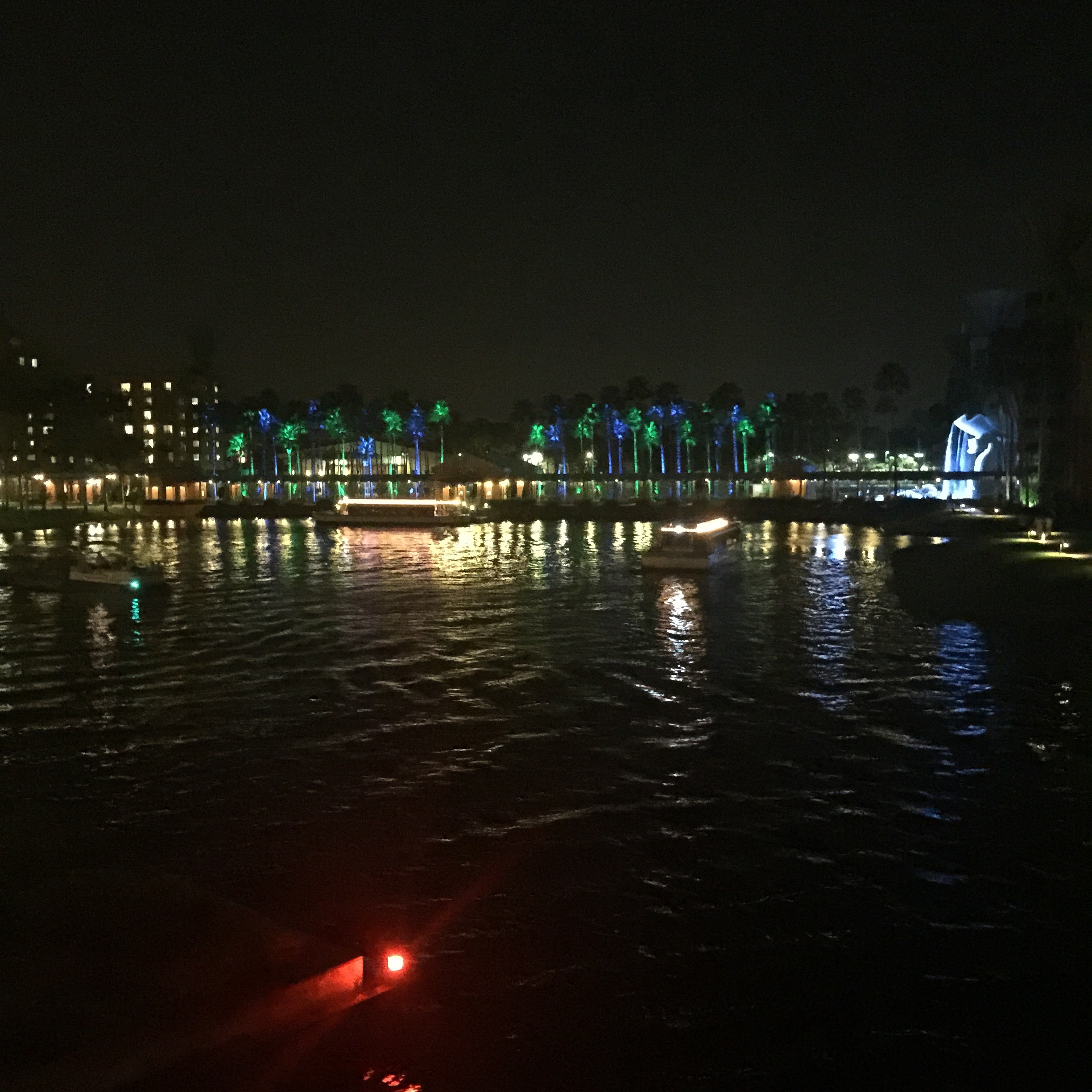 Just a couple more photos of us on the crazy bike and of the Boardwalk at night. It is so pretty at night with all of the lights reflecting in the water. The Boardwalk definitely has the nightlife if you are single and without kids, too! Ha! We enjoyed hot dogs and burgers at a kiosk and were going to get ice cream, but the line was out of the building!

That’s it for Animal Kingdom! Next Friday will be my last post and it will be our day at Hollywood Studios!