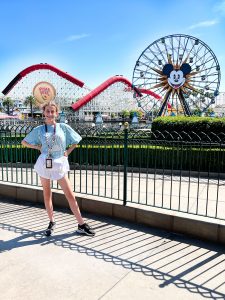 I’m back with my LAST recap post of San Diego. When we took a day trip to go see Disneyland, we purchased park hopper tickets and hopped on over to California Adventure at 1:00 p.m. It is so easy to see both parks, their entrances face each other with a courtyard in-between them. California Adventure was really fun and had a lot of rides in it that you can find at the Disney World theme parks in Florida. But, one area that they have which is DEFINITELY worth checking out is Cars Land. It is SO cool! For dinner, we dined at a winery (more on that below) and enjoyed wine from Napa Valley. I mean, when you’re in California, why not? 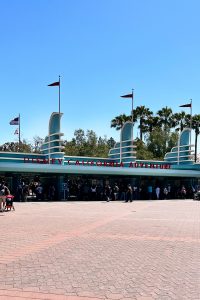 Here is the outside of California Adventure and you can see the courtyard I am standing on. If I were to turn around, you would see the entrance to Disneyland. They’re that close together. With the park hopper tickets you have to pick one or the other to visit first and then you can’t hop over to the other park until 1:00 p.m. I definitely suggest seeing Disneyland FIRST and if you get there at rope drop, you’ll beat a lot of the crowds by being there earlier in the day. 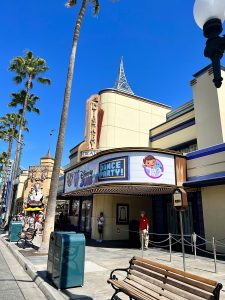 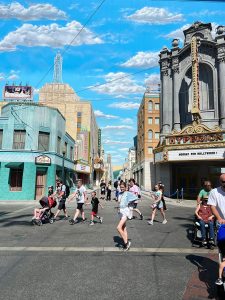 They got rid of this BIG backdrop screen called Streets of America in Hollywood Studios in Florida in 2016, because they replaced it with the Star Wars area. We always enjoyed taking photos in front of it and were excited to see that they had something similar to it at California Adventure in Hollywood Land. We got our photo taken at the waterfall feature at Grizzly Peak. 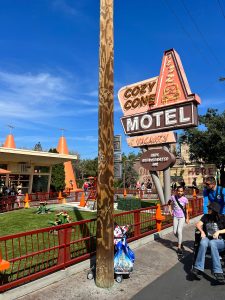 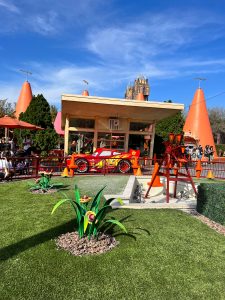 Cars Land was my ABSOLUTE favorite part of our day trip to California Adventure. This was the IT movie when Nathan was little and he had all the little Cars and would roll them around the house, kept them in his shorts pockets, etc. I have seen the Cars movie at least a hundred times. So, it was really neat to walk around Cars Land and see it replicated as a life size area! 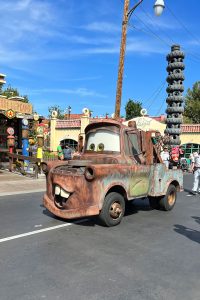 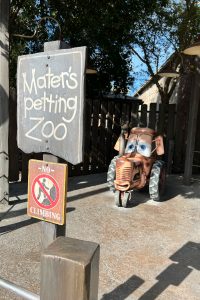 Everything was done up just like the movie. I literally felt like I was walking through the movie set. I really wish they had Cars Land at one of the theme parks in Disney World in Florida. 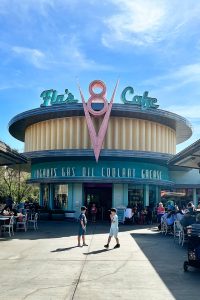 You could even dine at Flo’s 8 Cafe! We went on the Radiator Springs Racers and WHOA it was quick and there are three LARGE hills at the end and whew! I would say out of our entire day, this ride was tied with the Star Wars Rise of the Resistance ride. Both were different, yet SO cool! Our day at California Adventure went quick since we didn’t walk over to it until 1:00 p.m. We had dinner reservations and dined outside at Wine Country Trattoria. This was not our first choice, but we had a REALLY hard time securing reservations at two other places in Disneyland that we had wanted to dine at more (one was under renovations and the other was just plain booked unless we wanted to eat a half hour after lunch!). HOWEVER, we REALLY loved Wine Country Trattoria!! I would dine there again in a heartbeat. This is how Disney’s website sums it up: Experience the Napa Valley’s passion for wine and fresh seasonal fare in an idyllic Mediterranean garden setting. 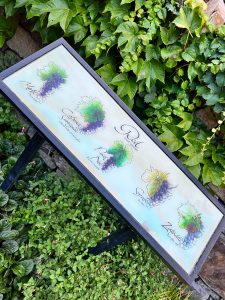 There is walkway you take to the restaurant and you see grapevines along the pathway. 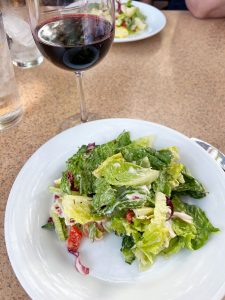 The outdoor dining was beautiful! It was so nice to sit outside with a glass of Cabernet from Napa Valley. Ahhh. The good life. Except we had an hour and a half drive back to San Diego that evening, so we didn’t do more than a glass of wine. I would have loved one of their wine flights, but oh well! Ha! 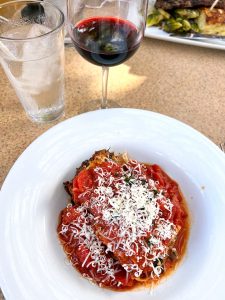 I had their Roasted Vegetable Lasagna made in-house with mushrooms, eggplant and bell peppers and asked for it with a marinara sauce instead of meat sauce (I try to be vegetarian as much as possible!). The red sauce was so delicious. I had a friend that always said that if a restaurant can make a REALLY good red sauce, then they are top notch! The dessert I selected was a cookie with a cream tart filled with raspberry sauce. It was really good. That’s it for my San Diego recap. Be sure to check out all of my posts below. Brian and I are really hoping to get back to California next summer to celebrate our 10 year wedding anniversary. We are thinking it would be nice to see Napa and Sonoma! We’ll see if it happens!

Be sure to check out all my other San Diego posts below: