I’m back with my last Disney post… now that I’ve recovered from the heat and all of the food, I wish I could go back to Disney! Ha!! 🙂 In today’s post, I’m sharing our last two days at Hollywood Studios and the Magic Kingdom. 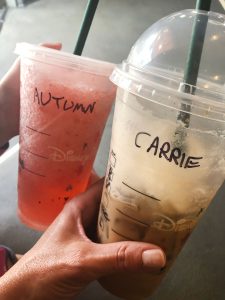 I just love that all of the Disney parks have Starbucks! Plus, if you’re on the Disney dining plan you can get any size (yes, a venti!) for 1 snack. The kids got venti sized drinks for the first time and were so excited! 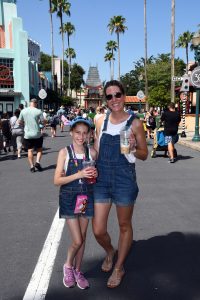 Autumn and I always do a Starbucks drinks pose! Last time we did one with cake pops, but she’s not into cake pops anymore… so, it was just our drinks! 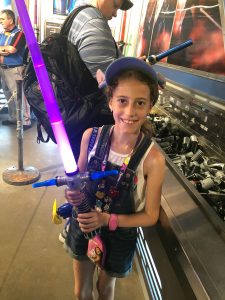 The first ride we went on was Star Tours and Nathan and Autumn built these light sabers! 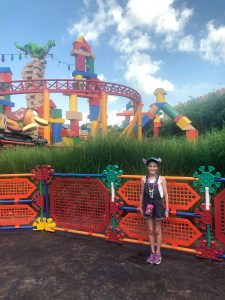 The boys went off to go on Tower of Terror and Autumn and I went to check out the new Toy Story Land in Hollywood Studios. Ok, just a warning… this area is HOT, there are NO stores to go into that have air conditioning and even the quick service restaurant (Woody’s Lunch Box) has ALL outdoor seating. Make sure you have on a lot of sunscreen, a misting fan and bring lots of water as you explore this area. It’s brutally hot! 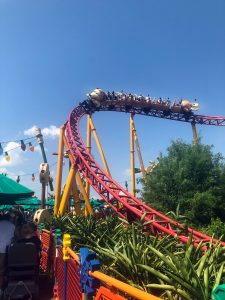 The new Slinky Dog Dash Rollercoaster was SO, so cool! I’m not a big fan of rollercoasters anymore, but I would probably go on this… Brian and Nathan really liked it! 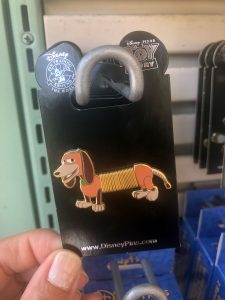 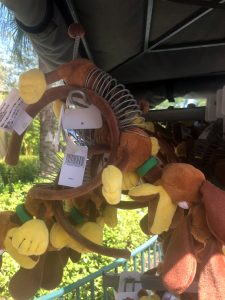 They had ALL kinds of slinky dog merchandise to buy. Autumn got the collectors pin and it stretches out! So fun! Lots of kids had the slinky dog headbands on. 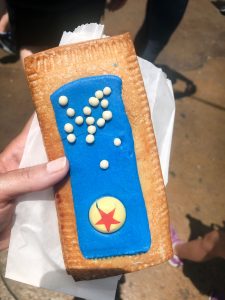 We didn’t dine at the new quick service restaurant in Toy Story Land, because it was just too hot to dine outside… but, we did pick up a gourmet blueberry pop tart (pictured above) and a candied bacon hazelnut pop tart for a snack. I really loved the blueberry one and Brian preferred the hazelnut one. These ARE A WINNER! Definitely get these while you’re in Toy Story Land, they’re SOOOOO good! 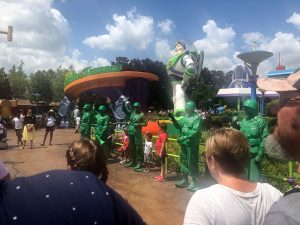 They had these army guys in Toy Story Land and oh my, they must have been SO hot! 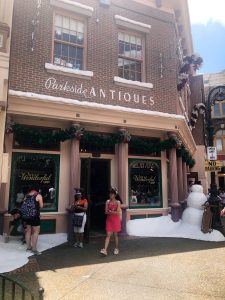 I really love the Christmas store at Hollywood Studios. I always go in and I buy myself a slipper ornament every other year when we visit Disney. 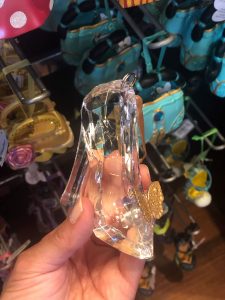 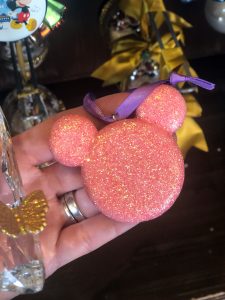 This year I got a glass slipper and I also picked up a Mickey macaroon ornament! 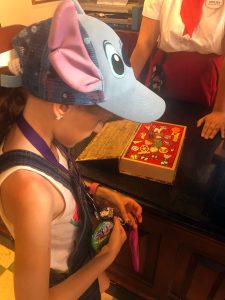 The Christmas Store at Hollywood Studios always has a great selection for pin trading! And, it was Stitch Day, so Autumn got a Stitch Pin! 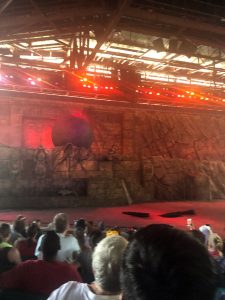 We saw the Indiana Jones Show, I always enjoy it! We got popcorn and some drinks to munch on during it. They had fans going and it is covered, so a nice break from the heat. 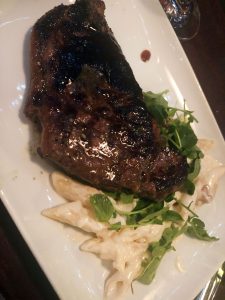 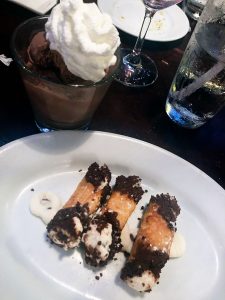 Mama Melrose is my absolute fave restaurant in Hollywood Studios! I got the steak and mac and cheese and it was DELICIOUS! However, I chipped some bonding that I’ve had done on my tooth on the cannoli! Boo!! I’ve already been to the dentist and had it fixed. It was behind the tooth, so more of an annoyance to me than anyone else since it wasn’t noticeable! I had some chocolate gelato with my cannoli… I was living it up!!

Ok, NOW… if I haven’t already overloaded you with enough photos from Hollywood Studios, let’s dive into our last day at the Magic Kingdom!!! 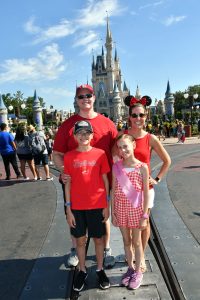 I just love Disney’s Memory Maker, there are so many Disney photographers around Cinderella’s castle and we got an easy family photo! 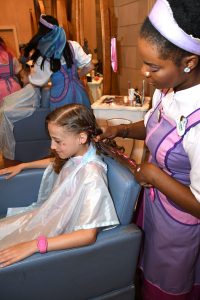 Autumn has gone to the Bibbidi Bobbidi Boutique every Disney visit! Since she’s getting a little older, she mainly just wanted to get her hair done and she didn’t wear a princess gown. 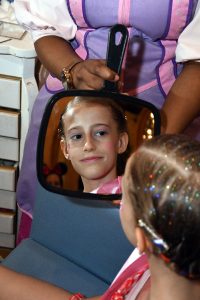 They let your daughter pick out a hairstyle and they do their hair, makeup and nails. 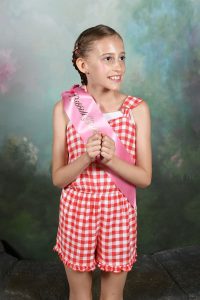 Autumn wore this adorable gingham jumper from FabKids, a company she does a collaboration with every month. It was so cute, the ladies doing her hair told her she was the cutest little picnic basket they had ever seen. 🙂 I love how Disney’s Memory Maker has a special spot near the castle where you can get professional style photos after they get their hair done. 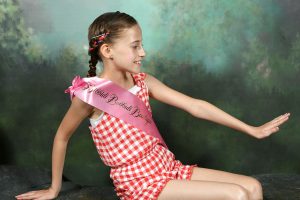 I adore this photo of her looking at her nails. 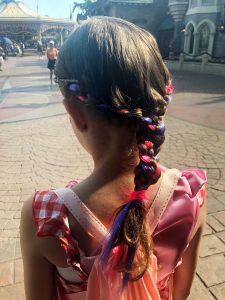 This isn’t the best photo, but she got this braid done in her hair with some fake stands of hair in pink and purple. She also got a princess cinch bag and they put her nail polish and makeup in there. 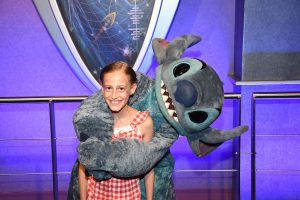 Autumn’s favorite Disney character (at least for this trip) was Stitch. So, of course we found a Stitch photo place at the Magic Kingdom. 🙂 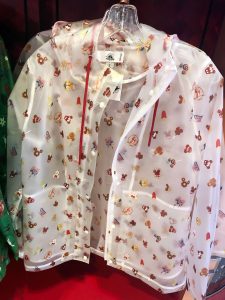 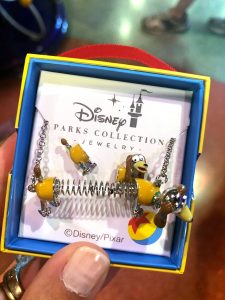 I love looking at the Disney merchandise, isn’t this rain coat with all of the Disney desserts on it the cutest? And some fun slinky dog jewelry. 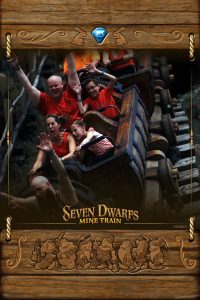 Autumn and I aren’t the biggest fans of rollercoasters, but she made me go on the Seven Dwarfs Mine Train ride and WOW. I look terrified in this photo. Although, we had also found out our guinea pig had given birth right before we got on this ride, so maybe it was a little of that, too! LOL! 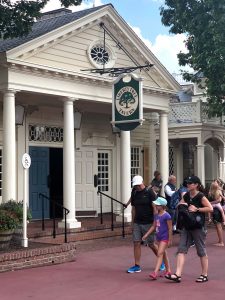 We tried a new (to us) restaurant for dinner, the Liberty Tree Tavern. It has Thanksgiving style food served family style. This restaurant was one of our faves from the entire trip! You get bread, salad, sliced turkey,  pork tenderloin, beef (pot roast style, it was SO tender and yummy), mashed potatoes, brown gravy, mac and cheese (my husband LOVED the mac and cheese), green beans and a bread pudding with ice cream for dessert. It was SO much food and SO good!!!! The only part of the restaurant I’d complain about was the bathroom. It was upstairs and so small that we had to leave the restaurant and go outside to a public bathroom (that was the next building over).